Background: Sorafenib appears to increase the survival rate of hepatocellular carcinoma (HCC) patients, but its response rate is seriously limited due to drug resistance. Molecular mechanisms underlying sorafenib resistance are still unknown. Herein, we explored the possible role of miR-1226-3p in sorafenib resistance of HCC.

Methods: The miR-1226-3p expression level in HCC cell lines was evaluated by qRT-PCR. Cell viabilities to sorafenib were measured by CCK-8 assay. Cell apoptosis and proliferation were detected by flow cytometry and EdU proliferation assay. A luciferase reporter of DUSP4 3'-UTR was used for validation as a target gene of miR-1226-3p. Finally, the effects of in vivo antitumor efficacy of miR-1226-3p combined with sorafenib were evaluated by HCC tumor xenografts in nude mice.

Conclusions: miR-1226-3p promotes sorafenib sensitivity of HCC through downregulation of DUSP4 expression, and targeting miR-1226-3p may be a novel therapeutic strategy for overcoming sorafenib resistance.

Liver cancer is the sixth most commonly diagnosed cancer and the fourth leading cause of cancer death worldwide, and HCC accounts for roughly 85% of all primary liver cancers [1]. Sorafenib, an oral multikinase inhibitor, is the first systemic drug for patients with advanced HCC [2]. Unfortunately, the effectiveness of sorafenib is limited on account of primary and acquired resistance [2]. Therefore, it is crucial for us to explore the molecular mechanisms underlying sorafenib resistance, as well as to evolve new strategies for the treatment of HCC patients.

As a set of small endogenously expressed non-coding RNAs of 18-22 nucleotides, microRNAs (miRNAs) inhibit translation of target mRNA through binding to their 3'untranslated regions (3'UTR) [3, 4]. Accumulating evidences revealed that the dysregulation of miRNAs is involved in HCC pathogenesis and drug resistance [5-8]. It has been reported that miR-7 overexpression can overcome sorafenib resistance in HCC [9]. Additionally, a previous study demonstrated that sorafenib resistance could be reversed by upregulation of miR-137 which downregulated ANT2 expression in HCC [10]. Other studies also reported that some miRNAs, such as miR-622, miR-486 and miR-338-3p, could affect the drug sensitivity of HCC [11-13]. Recently, limited studies revealed that miR-1226-3p functioned as a tumor suppressor and might be associated with tamoxifen resistance in breast cancer [14, 15]. However, its role in HCC remained largely unknown.

Dual specificity phosphatase 4 (DUSP4), also called MAPK phosphatase 2 (MKP2), is a member of the dual specificity phosphatase family and specifically dephosphorylates the MAP kinases ERK1/2, p38 and JNK acting as negative regulators of MAPK activity [16, 17]. The alterations of DUSP4/MKP2 expression have been reported to involve in tumor progression and drug resistance [18, 19]. It was well established that DUSP4 expression level upregulated in liver carcinomas [20]. Recently, a study has discovered that DUSP4 promotes doxorubicin resistance in gastric cancer by epithelial-mesenchymal transition (EMT) [21]. Furthermore, others demonstrated that knockdown of DUSP4 could increase the doxorubicin sensitivity of breast cancer cells [22]. Nevertheless, little is known about the role of DUSP4 in chemoresistance of HCC.

In the present study, we found that HCC patients or cells with higher expression of miR-1226-3p were more sensitive to sorafenib. We confirmed that DUSP4 was a target of miR-1226-3p, and further demonstrated that downregulation of DUSP4 significantly enhanced the anti-tumor efficiency of sorafenib in HCC cells. In addition, our results also showed that inhibiting DUSP4 markedly up-regulated the phosphorylation of JNK. Taken together, these data suggested that targeting miR-1226-3p or DUSP4 may improve therapeutic benefit to HCC patients receiving sorafenib treatment.

HepG2 and SK-HEP-1 cells were respectively seeded into a 96-well plate at a density of 1×104 and 0.5×104 cells/well, and treated with medium containing 10% FBS for 24 h for synchronization. Then different concentrations of sorafenib (Nexavar®) were added and the cells were cultured for 48 h. The viable cells were quantified using the Cell Counting Kit-8 (CCK-8; Beyotime, China) according to the manufacturer's protocol. Absorbance was measured at 450 nm using a microplate reader (Dynex, Chantilly, VA, USA). The absorbance value obtained from cell lines without sorafenib treatment (control) was normalized as 100%.

Proliferation was performed using the BeyoClick™ EdU Cell Proliferation Kit with Alexa Fluor 488 (Beyotime, China) according to the manufacturer's protocol. HepG2 and SK-HEP-1 cells were respectively seeded in a 6-well plate and incubated with 10% FBS-medium containing different concentrations of sorafenib for 48 h. Then, the cells were fixed in 4% paraformaldehyde for 15 min at room temperature and permeabilized with 0.3% Triton X-100 for 15 min at room temperature. Next, the cells were washed thrice using PBS, and cultured with 0.5 mL of Click Reaction Mixture for 30 min in the dark. Finally, cell nucleus was counterstained with 1.0 mL of 1× Hoechst (1:1000) for 10 min. The fluorescence microscope (Olympus, Tokyo, Japan) was used to count the numbers of proliferative cells (EdU-positive) in three random fields of view per slide.

DUSP4 3'-UTR luciferase reporter gene plasmid was constructed by GenePharma Inc (Shanghai, China). Plasmids named pDUSP4-WT and pDUSP4-Mut were generated via subcloning downstream of the luciferase vector. The HepG2 cells were co-transfected with pDUSP4-miR-1226-3p-UTR-WT or pDUSP4-miR-1226-3p-UTR-Mut by Lipofectamine2000. After 48 h, cells were assayed using Dual Luciferase Reporter Gene Assay Kit (Beyotime, China) according to the manufacturer's instructions. Luminescent signals were quantified with a luminometer (Centro XS3 LB 960; Berthold Technologies, Germany), and each value for firefly luciferase activity was normalized by renilla luciferase activity.

Animal experiments were approved by the Animal Research Committee of Sun Yat-Sen University, and all procedures strictly followed the NIH Guide for Care and Use of Laboratory Animals. Female nude mice at age of 5-6 weeks were purchased from the Sun Yat-Sen University Laboratory Animal Center (Guangzhou, China). Approximately 5.0×106 SK-HEP-1/miR-1226-3p or SK-HEP-1/control cells were suspended in 100 μL PBS and injected subcutaneously into the right side of the posterior flank of female nude mice. When the average tumor size reached approximately 50 mm3, sorafenib (30 mg/kg) was administered via intraperitoneal injection every other day. All mice were killed after 2 weeks. The primary tumors were excised and analysed by immunohistochemistry of DUSP4 antibody (Proteintech Group, Wuhan, China) and PCNA antibody (Proteintech Group, Wuhan, China). 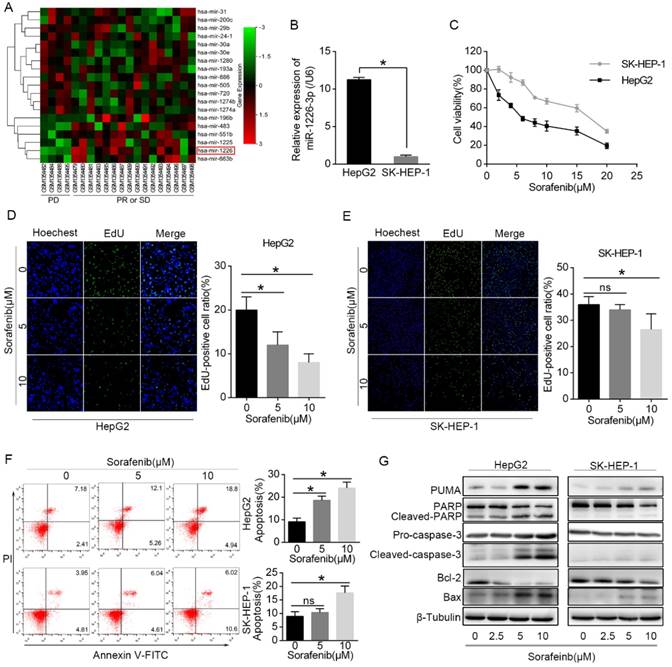 To elucidate the mechanism by which miR-1226-3p promoted sorafenib sensitivity in HCC, we performed the database analysis using two publicly available bioinformatics tools (TargetScan and OncomiR). We searched the candidates in apoptosis-related genes containing potential binding sites for miR-1226-3p in their 3'-UTRs and found DUSP4 as a target gene of miR-1226-3p. The predicted interactions between miR-1226-3p and the 3'-UTRs of DUSP4 are shown in Figure 3A. Next, we constructed a luciferase assay using reporter plasmid containing wild type (WT) or mutant (MUT) sequence of 3'UTR region of DUSP4. As shown in Figure 3B, ectopic expression of WT miR-1226-3p significantly decreased luciferase activity levels compared to control, whereas that of MUT miR-1226-3p did not. Furthermore, transfection of miR-1226-3p inhibitor in HepG2 cells increased DUSP4 mRNA and protein expression levels, while transfection of miR-1226-3p mimic in SK-HEP-1 cells decreased them (Fig 3C-E). These results demonstrated that DUSP4 was a target of miR-1226-3p and miR-1226-3p could directly downregulates DUSP4 expression. 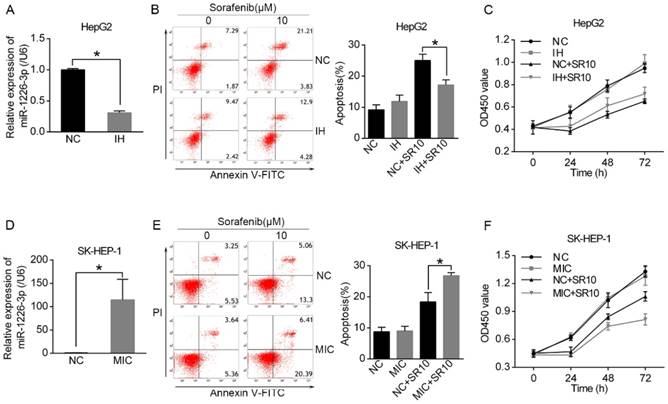 Sorafenib is currently regarded as the first-line treatment option for advanced HCC patients, whereas the development of drug resistance often prevents its long-term efficacy. Numerous reports demonstrated that the dysregulation of miRNAs was involved in sorafenib resistance of HCC [9, 11, 23-26]. In recent years, some studies have showed that miR-1226-3p exerts antitumor functions and is related to tamoxifen resistance in human breast cancer [14, 15]. However, the role of miR-1226-3p in HCC has not been characterized.

Knockdown of DUSP4 increased sorafenib sensitivity and activated the JNK signaling pathway. (A) DUSP4 was knocked down in SK-HEP-1 cells by siRNA and qRT-PCR was performed to analyze DUSP4 expression. (B, C) The viability and apoptosis of SK-HEP-1 cells transfected with DUSP4 siRNA or negative control siRNA were respectively measured by CCK-8 assay and flow cytometric analysis after treating with 0 or 10 µM sorafenib for 48 h. (D) Western blot analysis of DUSP4, JNK, ERK, p38, Bcl-2, Bax and β-tubulin were performed. (NC: negative control. siDUSP4: DUSP4 siRNA. SR10: 10 µM sorafenib) (*p < 0.05) 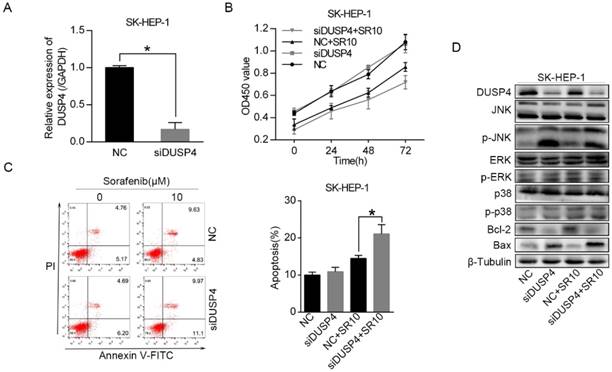 miR-1226-3p overexpression promoted the in vivo antitumor effects of sorafenib. (A) Representative photos of tumors at endpoint. Graph showing the weight of tumors generated in each group. (B) DUSP4 and PCNA expression levels were analysed by immunohistochemistry in SK-HEP-1/miR-1226-3p xenografts and SK-HEP-1/control xenografts with or without sorafenib treatment. Scale bars: 50 µm (200×) (NC: negative control) (*p < 0.05).

DUSP4 is an inducible nuclear phosphatase whose primary function is to regulate the MAPK pathway. Some reports have showed that DUSP4 plays an essential role in the regulation of cancer cells and drug resistance [28, 29]. However, the role of DUSP4 in cancer is contradictory. Some studies described that DUSP4 is a cancer suppressor gene, and that loss or mutation of DUSP4 is involved in the growth of a variety of tumors, including breast cancer, large B cell lymphoma and other primary tumors [29-31]. However, other studies reported that DUSP4 is tumorigenic and overexpression of DUSP4 promotes cancer development and progression [19, 32]. Otília Menyhart et al. found that DUSP4 was associated with increased resistance against anti-HER2 therapy in breast cancer [33]. Moreover, it has been reported that knockdown of DUSP4 increases doxorubicin sensitivity of breast cancer cells [22]. In the present study, we also discovered that knockdown of DUSP4 could enhance sorafenib sensitivity of HCC. Meanwhile, we had demonstrated that miR-1226-3p overexpression could directly downregulate DUSP4 expression, which significantly enhanced sorafenib sensitivity of HCC. Thus, our results suggested the possible mechanism that miR-1226-3p enhanced sorafenib sensitivity of HCC through downregulating DUSP4 expression.

Resistance to sorafenib is a major challenge to improve HCC patient prognosis. Many factors, including the JNK signaling pathway, play a pivotal role in sorafenib resistance of HCC [34-36]. The Jun N-terminal kinase (JNK) is often deregulated in cancers affecting proliferation, differentiation, apoptosis and migration, and can both phosphorylate and regulate the expression of several members of the Bcl-2 protein family, such as Bax and Bcl-2 [37, 38]. Recently, a study has demonstrated that JNK activation can enhance sorafenib sensitivity of HCC [39]. In addition, Ying-Ying Liang reported that JNK activation improved the anti-tumor effects of sorafenib in renal cell carcinoma [40]. Consistent with these previous reports, we had found that the protein levels of phosphorylated JNK was significantly increased after knockdown of DUSP4, and the anti-tumor effects of sorafenib in HCC was also promoted. Besides, we noted that Bcl-2 protein levels were distinctly decreased probably because of the JNK activation after transfection of DUSP4 siRNA. Several reports have confirmed that Bcl-2 family proteins can affect the HCC cells response to sorafenib [8, 24], and the repression of Bcl-2 enhance sorafenib-induced apoptosis in malignant cancer cells [41]. Therefore, based on our results, we might draw a conclusion that miR-1226-3p promoted sorafenib sensitivity of HCC due to the JNK activation and Bcl-2 suppression.

In summary, we demonstrated that miR-1226-3p promoted sorafenib sensitivity of HCC by downregulation of DUSP4 expression in vitro and in vivo, which providing us with a novel understanding of the mechanisms underlying sorafenib resistance. Further research is necessary to assess the roles of miR-1226-3p in the clinical context and determine the side effects of interfering with miR-1226-3p regulation in animals or humans.

This work was supported by grants from the National Natural Science Foundation of China (no. 81672419; no. 81572398), the Science and Technology Planning Project of Guangdong Province (no. 2017A010105003; no. 2016A020216010; no. 2015A050502023). Yajin Chen and Changzhen Shang designed the experiments; Xianqing Chen and Wenliang Tan performed the experiments and wrote the manuscript; Wenxin Li and Wenda Li revised the manuscript; Sicong Zhu interpreted the data and Jinyi Zhong made the pictures.

4. Rupaimoole R, Slack FJ. MicroRNA therapeutics: towards a new era for the management of cancer and other diseases. Nat Rev Drug Discov. 2017;16:203-22