The characteristics of HPV integration in cervical intraepithelial cells

Cervical cancer is one of the most common malignant tumors in gynecology, with an occurring incidence only second to that of breast cancer among all female malignant tumors. In recent years, due to the development of cervical exfoliative cytology, the rate of cervical cancer had been decreased by 70%-80%, as well as the corresponding mortality [1]. It is believed that the sensitivity and specificity of cervical cancer and precancerous lesion diagnosis by cytology were around 47%-62% and 60%-90%, respectively [2]. Suggesting further improvement of the current diagnostic mean is urgently demanded to help identify the high-risk group.

More recently, HPV screening had been shown better at predicting cervical cancer than cytology as confirmed by an increasing number of studies. It is acknowledged that HPV infection could be cleared by the host immune system in most of women. Nevertheless, HPV infection in approximately 1-2% of the affected might persist and eventually leading to cervical intraepithelial neoplasia or cervical cancer [3]. The high-risk HPV had a clear association with the development of carcinogenesis. During the persist infection of the high-risk HPV, HPV integration events could often be detected, which were well known to cause genome instability, abnormal gene expression in cells [4-6]. In addition, the viral E2 region is often being abrogated upon the HPV integration, resulting in uncontrolled viral replication [7]. An elevating number of research data had now suggested that the DNA integration of high-risk HPV might be pre-requisite and/or driven force of HPV-induced carcinogenesis, the maintenance of malignant phenotype, and the development of cervical cancer [8]. As followed by the ongoing research, the association of HPV integration have been established with the CIN level of the cervix, which could potentially being used as a marker for the cervical cancer risk assessment for those who suffered HPV infection [9]. Bearing in mind that most of the current research on HPV integration had focused and established on the pathological tissues. In clinical practice, cervical exfoliated cells might be collected relatively at ease compared to pathological tissues, providing a distinct advantage to be applied to generate HPV integration databases, and hence assessing the risks of HPV integrations. To find out the regularity of HPV integration in cervical exfoliated cells and also the correlation of HPV integration characteristics of exfoliated cells and different degrees of cervical lesions, we deployed the cost-effective HIVID detection technology. Altogether, this study had provided partial theoretical basis on whether HPV integration events of cervical exfoliated cells could have potential to be regarded as an effective clinical indicator.

A total of 230 HPV positive samples were obtained from the General Hospital of the People's Liberation Army (PLA). All procedures performed in this study involving human participants were in accordance with the ethical standards of the institutional research committee and with the 1964 Helsinki Declaration and the later amendments or comparable ethical standards. The study had been approved by the Ethics Review Committee in the General Hospital of the PLA. HPV integration sites were detected using HIVID method [10]. Functional annotation analysis was performed using DAVID based on Gene Ontology and KEGG pathway databases [11, 12]. The categories of KEGG Pathways served as background databases. The breakpoints were annotated through the latest ANNOVAR in hg19 coordinates [13].

It is now documented that HPV integration could affect gene expression in following aspects. 1. Influence flanking genes via cis-activation; 2. mimicking the effects of cis-acting enhancers to influence target genes over long distances [14, 15] (up to 1 Mb for upstream enhancers and 850 kb for downstream enhancers). In this study, genes located within a distance of <500kb away from breakpoints were regarded as the affected genes, and being assessed in the HPV-positive samples [16].

3.2 The Recurrent Genes of HPV Integration in the DNA of Cervical Epithelial Samples

As documented in the frequency analysis, most genes only appeared once in the samples, despite a number of recurrent genes (Figure 2). Overall, 15 recurrent genes (frequency = 2) were filtered out from the HPV positive cervical epithelial samples (Table S1, Table S2). Pathway analysis revealed that the disrupted genes were enriched in the pathway of Metabolism of xenobiotics by cytochrome P450, Chemical carcinogenesis, Steroid hormone biosynthesis and so on (Table S3).

The cervical epithelial exfoliated cells had been widely used for early screening of HPV, due to its obvious advantage of being non-invasive, which had greatly reduced the incidence of cervical cancer. In spite of that the screening accuracy is yet to be improved further. The development of new generation of HPV screening (enrich HPV reads and localise HPV integration sites) had provided technical basis allowing the risk assessment of cervical epithelial lesions. Having provided in the previous studies, persistent HPV infection is the causal cause of cervical epithelial lesions, and the occurrence of HPV integrations often indicating a greater risk of epithelial lesions [17, 18]. Herein, our results suggested that the proportion of HPV integrated samples and the average number of breakpoints in the samples positively correlated with the stage of disease progression. Further implying that certain categories of HPV integration events could be good indicators of the progressive stage of developing cervical cancer. In fact, detecting HPV integration of cervical epithelial cells has gradually been practiced in clinical diagnosis and treatment. Generally speaking, for patients positive for HPV high-risk infection and HPV integration, even with negative TCT, the patients will be advised to carry out colposcopy examination, hence to prevent false diagnosis. For patients positive for HPV high-risk infection, but negative for HPV integration and TCT, the patients will be required to carry out short-term observation. In circumstances where patients are positive for HPV high-risk infection and integration, and biopsy of CINI, LEEP or cervical conization is usually recommended. For cervical cancer and HPV integration positive patients, it is recommended to expand the scope of surgery and increase the number of post-operative examinations. Furthermore, HPV integration hotspots and the recurrent genes had also been filtered out. However, it is still unclear whether the recurrent genes could be useful in terms of helping with prognosis. More interestingly, the breakpoints are significantly enriched in the INTRON and PROMOTER regions. Therefore, it might be directly related to the disruption and alteration of gene function [19, 20]. Gene pathway analysis results indicated that the HPV-integrated genes were significantly inclined to the metabolic and steroid hormone bio-synthesis pathways, and it is speculated that certain abnormalities in some of the metabolic and bio-synthesis pathways may be affected contributing to the progression of cervical cancer. In addition, HPV integrations had been evident to affect the cancer-associated pathways and modify target gene expression in the host cells, which could further promote carcinogenesis [21, 22]. Moreover, we have begun to conduct follow-up studies on patients with HPV integration for future research. It will be necessary to further determine the correlation of between disease progression and HPV integration. Meanwhile, it will provide efficient means to evaluate disease progression.

In this study, deploying a genome-wide scanning method for HPV integrations had enabled us to determine the close correlation between viral integration and clinical disease progression. Our data had identified the inclination of HPV integration and the recurrent HPV-integrated genes in cervical epithelial exfoliated cells which might be useful in establishing a more sensitive and accurate future clinical application, helping with the diagnosis of HPV positive cervical cancer.

Clinical annotation of 230 samples. All panels are aligned with vertical tracks representing 230 individuals. The data are sorted by the number of breakpoints, HPV infection stage, CIN stage, Cancer and HPV type. 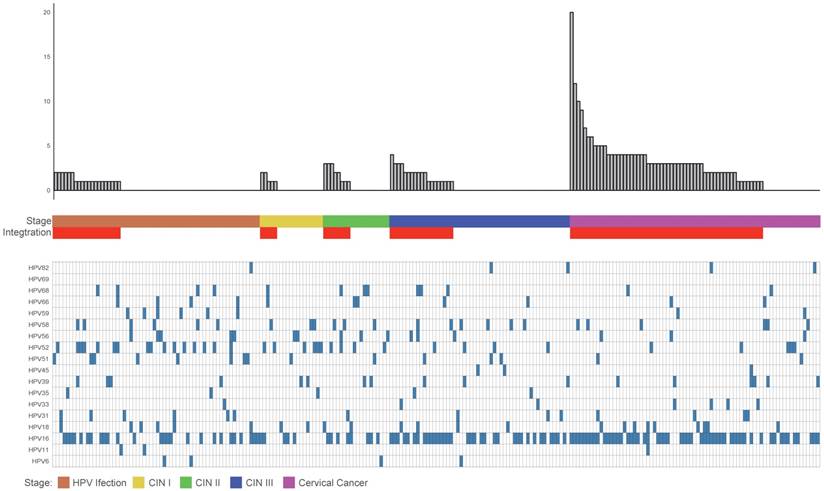 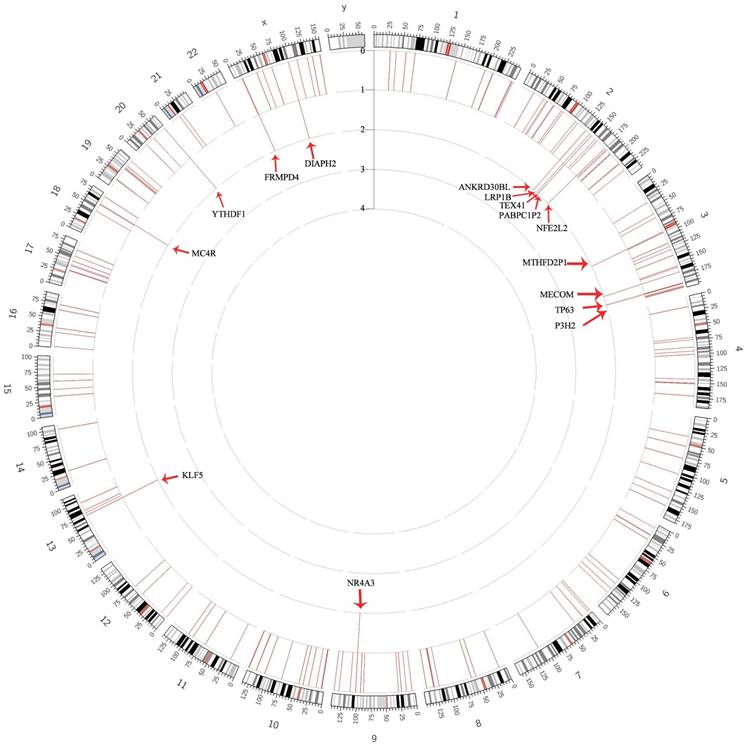 The study was funded by Cancer foundation of China (N2013016), Technology Development Project of Medical and Health Science in Shandong Province (no. 2017WS516), Research Fund for Lin He' s Academician Workstation of New Medicine and Clinical Translation in Jining Medical University (JYHL2018MS05) and Supporting Fund for Teachers Research of Jining Medical University (JYFC2018KJ034).

WYL, YQY and WPL conceived and wrote the paper. ST, PPW and YKZ analyzed the data.

All procedures performed in studies involving human participants were in accordance with the ethical standards of the institutional research committee and with the 1964 Helsinki Declaration and its later amendments or comparable ethical standards. The study had been approved by the Chinese PLA General Hospital. All subjects signed written informed consent forms. 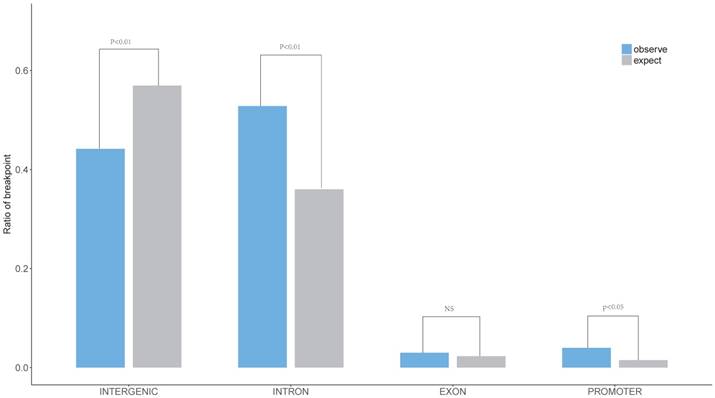