Background: Published data on the effects and toxicities of volumetric modulated arc therapy (VMAT) in the management of inoperable lung cancer are scarce.

Materials and methods: The clinical outcomes and pulmonary toxicities of 134 patients with consecutive inoperable lung cancer who underwent VMAT from March 2011 to September 2016 were retrospectively reviewed. The dosimetric and characteristic factors associated with acute radiation pneumonitis (RP) and pulmonary fibrosis were evaluated with univariate and multivariate analysis.

Conclusion: VMAT can be delivered safely with acceptable acute and late toxicities for lung cancer patients. Lung dosimetric metrics were valuable in predicting acute RP. A lung V13 constraint of 40% was helpful to limit the RP rate < 10% in VMAT treatment of lung cancer patients.

Radiotherapy is an important modality in the treatment of lung cancer. More than 50% of lung cancer patients received radiotherapy at some point during their treatment.1 For radical purposes, the ultimate goal of radiotherapy is to achieve local tumor control while sparing the surrounding normal tissue to limit toxicities. Currently, intensity-modulated radiotherapy (IMRT) is applied routinely in the management of both early stage and locally advanced non-small-cell lung cancer (NSCLC) in radiation centers across the world due to its ability to sculpt high-dose volume around the site of disease and thereby spare adjacent organs at risk (OAR).2,3 IMRT allows the treatment of target volumes previously considered too large for a radical dose and permits safer dose escalation to the tumor.4 A review article demonstrated that IMRT can be delivered safely with acceptable acute and late toxicities compared with three-dimensional (3D) conformal radiotherapy (CRT).5 Crucially retrospective studies also reported an advantage on disease-free survival (DFS) and overall survival (OS) over those achieved with conventional 3D-CRT.6,7

Despite the advantages of IMRT, concerns on the effects of intra-fraction motion had been raised, because IMRT requires multiple fixed angle beams that can increase the treatment delivery time.8 Although image-guided radiation therapy has improved the patient positioning accuracy, it often requires more time in treatment and increased radiation to the patient due to imaging before each treatment session.9 Furthermore, a higher number of monitor units (MUs) in IMRT plans could potentially increase the low dose radiation exposure of patients, and this has led to concerns of increased risk of secondary radiation-induced malignancies, especially for pediatric patients.10,11

Volumetric modulated arc therapy (VMAT) is an new form of IMRT with continuous changeable dose rate, gantry speed, and dynamic multileaf collimator movement.12 The major advantages of VMAT over IMRT are the decreased MU and treatment delivery time.13,14 A shorter treatment delivery time per fraction is particularly critical for tumors with a moving target such as lung cancer as the intra-fraction motion was found to increase with time.15 The published data on VMAT (RapidArc and SmartArc) planning studies for lung cancer showed that VMAT techniques have clear superiority over 3DCRT with regard to improving dose conformity and sparing of OARs.16

On the other hand, published clinical data on safety and clinical outcomes of VMAT in lung cancer treatment are scarce. Therefore, the purpose of this study is to investigate the effects, and the acute and late pulmonary toxicities of VMAT (sequential/concurrent chemotherapy) in the treatment of patients with inoperable lung cancer.

Between March 2011 and September 2016, a total of 134 consecutive patients with inoperable lung cancer were treated by VMAT with or without concurrent chemotherapy in our hospital. Concurrent chemotherapy was administered with a combination of cisplatin and etoposide or carboplatin and paclitaxel. The retrospective review was approved by the Institutional Review Board (IRB) of the first Affiliated Hospital of Wenzhou Medical University and conducted in accordance with the Declaration of Helsinki (IRB#2016054). The need for written informed consent was waived with confirmation of patient data confidentiality by IRB for this retrospective study. All primary tumors were confirmed cytologically or histologically. Total body single-photon emission computed tomography (SPECT) and brain magnetic resonance imaging (MRI) were performed for tumor staging purposes before the start of treatment.

Contrast computed tomography (CT) images were scanned to delineate the gross tumor volume (GTV) which encompasses the primary tumor volume and the positive mediastinal lymph nodes according to the International Commission on Radiation Units and Measurements (ICRU) report 62 criteria.17 The clinical target volume (CTV) was generated by including GTV and uninvolved mediastinal and ipsilateral hilar nodes. CTV added a 7-mm margin to generate a planning target volume (PTV). OARs, such as lungs and heart, were automatically contoured using the Pinnacle3 treatment planning system (version 9.8; Philips Radiation Oncology Systems, Fitchburg, USA) with necessary manual correction. The inner margin of the entire bony thoracic spinal canal was defined as the spinal cord. The length of the esophagus was contoured from the lower border of the cricoid cartilage to the gastro-esophageal junction.

For VMAT plan optimization, single or two-arc VMAT plans were generated according to target volume and dosimetric considerations at a synergy accelerator (Elekta, Stockholm Sweden) equipped with MLCi2 multileaf collimator (MLC). The prescription dose for these patients was 2 Gy for 26- 32 fractions at 6 MV.A final arc space degree of 4 was employed with a leaf motion of 0.46 cm/deg. For one arc plans, the start and stop angles were 181° and 180° with clockwise (CW) rotation direction. Another counterclockwise arc from 180º to 181º was added to make a two-arc plan. Dosimetric constraints on PTV coverage and OAR sparing were setup for plan optimization. The coverage of PTV was set to at least 95% of the PTV volume covered by the 95% prescription dose. No point dose of the spinal cord should exceed 45 Gy. The V20 and V30 (the percent volume of lung receiving 20 Gy and 30 Gy) should not exceed 30% and 20%, respectively.

Patients were followed up and evaluated weekly with a chest radiograph or CT scan during treatment, 3 to 4 weeks after treatment completion, monthly in the first half year, and then every 3 months to 2 years, and every 6 months thereafter. Patients were required to have an immediate examination or intervention if symptoms, such as fever, cough or shortness of breath were observed during follow-up. Acute and late radiation pneumonitis (RP) were diagnosed by at least two radiation oncologists with consensus. RP was scored as greater than or equal to grade Ⅲ side effects according to the Common Terminology Criteria for Adverse Events (CTCAE) version 3.0.18

The records of enrolled patients were retrospectively reviewed until September 31, 2016. The end points of this study were OS and progression-free survival (PFS). PFS was evaluated based on clinical examination. If metastases were suspected, more images were required. The OS rate was analyzed with the Kaplan-Meier test. The association between dosimetric factors and RP were investigated by univariate and multivariate logistic regression. For variables that showed a trend toward statistical significance in the univariate analysis, forward stepwise logistic regression analysis was applied in the further multivariate analysis. SPSS 17.0 (IBM, Armonk, NY, USA.) was applied for statistical analyses, and p<0.05 was set as statistical significance. 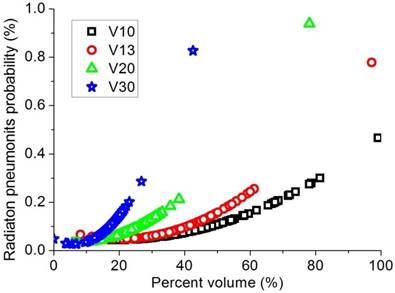 Dosimetric values of mean lung dose (MLD) and percent lung volume irradiated by a certain dose (V5-30), heart dose, PTV dose and tumor location, as well as univariate analyses on factors related to acute RP, are shown in Table 2. Fourteen of 134 patients had grade III/higher RP (10.5%). There were no acute treatment-related deaths. Age, chemotherapy exposure, dose prescription, V10, V13, V20, and V30 were significantly associated with acute RP. Sex, pathological type, stage, V5, and mean lung dose were not associated with acute RP in the univariate analysis. In the multivariate analysis, only V13 (p=0.02) and age (p=0.02) were independently associated with acute RP. To limit the RP rate to less than 10%, the constraint of V10, V13, V20, and V30 were approximately 49%,41%,26%, and 17%, respectively, as shown in Figure 2.

Although dosimetric studies had reported that VMAT can be delivered safely with acceptable acute and late toxicities for lung cancer, this is one of the few clinical evidences presented with the clinical outcome, as well as the dosimetric effects, of NSCLC patients who underwent VMAT.

Planning studies had evaluated VMAT techniques in lung cancer and reported that IMRT and VMAT resulted in a better conformity of dose and allowed higher dose to the target volume, thus improving regional tumor control.19 Planning studies had demonstrated that there is a dosimetric advantage of using VMAT compared with 3DCRT, and MU and delivery efficiency advantage compared with IMRT for lung cancer. However, there are no published randomized trials comparing the clinical outcome and toxicity between 3DCRT and IMRT/VMAT or IMRT versus VMAT in NSCLC, and such studies will not be forthcoming.20 The overall 2-year PFS and OS reported in this study were 18.2% and 38.4%, respectively. In the literature, Memorial Sloan Kettering study reported a 2-year OS of 58% and a median survival time of 25 months for 55 patients with stages Ib-IIIb (62% stage III) NSCLC.21 Yom et al reported a local control of 55.3% at 12 months with an estimated OS of 57% for 68 NSCLC patients (85% stage III) who underwent IMRT.22 Liao et al reported a 2-year DFS and OS of 38% and 46%, respectively, for 91 patients with locally advanced NSCLC treated by IMRT for a median 16.5 months of follow-up.23 These variations in PFS and OS from various studies may attributed to different factors such as adjuvant chemotherapy, plan optimization technique, experience of the treatment planner, treatment volume margins, dose prescription, location of the tumor, and dose calculation algorithms.

Studies had reported that the OS of NSCLC patients who underwent IMRT is not inferior to that of those treated by 3D-CRT, but the risk of RP was significantly reduced and the risk of radiation esophagitis increased by IMRT compared with 3D-CRT.24 IMRT had a significantly (p = 0.002) lower level of grade ≥3 radiation pneumonitis than 3D-CRT at 12 months (according to RTOG toxicity scoring), with 8% [95% confidence interval (CI): 4%-19%] and 32% (95% CI: 26%-40%) for IMRT and 3D-CRT, respectively.25 On the other hand, great concern had been focused on the fatal RP toxicity associated with IMRT.26 However, the RP rate of lung VMAT treatment had been rarely reported. In this study, a RP rate of 10.4% was observed in patients who underwent VMAT.

The effect of lung dose-volume parameters on the development of RP has been long investigated. Different constraints for different lung dose-volume histogram (DVH) parameters, such as V5, V10, V13, V20, V30, V40, and LMD, have been suggested to reduce the volume of normal lung irradiated and decrease the RP rate.27,28 In this study, in addition to age, chemotherapy exposure, and dose prescription, lung DVH parameters of V10, V13, V20, and V30 were observed to associated with RP. However, the high association of V5 with fatal RP reported in the IMRT treatment of pleural mesothelioma was not observed in this study..27 Similarly, in a previous study analyzing the dosimetric effects on 94 NSCLC patients treated by concurrent chemotherapy and IMRT, V5 was reported to be associated with severe acute RP in univariate analysis, but not in multivariate analysis.29 To limit the RP rate to less than 10%, the constraint of V10, V13, V20 and V30 were approximately 49%, 41%, 26%, and 17%, respectively, for patients who underwent VMAT.

This is a retrospective study from our institution only, we may not be able to fully evaluate the impact of various treatment-related outcomes in this study, such as chemotherapy. Chemotherapy had been reported to play an important role and increase the risk of RP in NSCLC treatment.30 More patients with longer follow-up duration are needed to further evaluate the efficacy and toxicities of VMAT in the treatment of NSCLC.

The treatment effects and toxicities reviewed in this article demonstrated that VMAT can be delivered safely with acceptable acute and late toxicities. Lung dosimetric metrics were valuable in predicting acute RP. A constraint of 40% of lung V13 in the VMAT treatment of NSCLC was helpful to limit the RP rate to less than10%.