LncRNAs have been proved to be involved in the promotion of glioma cell malignant development. However, the exact roles and molecular mechanisms of linc01023 in glioma remain blurred. In this study, we confirm linc01023 is up-regulated in glioma tissues and cell lines. In addition, elevated linc01023 expression indicates shorter survival times in patients with glioma. Moreover, loss-of-function studies reveal that restoration of linc01023 restrains glioma cell proliferation, migration and invasion by regulating IGF1R/AKT pathway in vitro and in vivo. Collectively, the study indicates that linc01023 plays an oncogenic role in glioma through activation of IGF1R/AKT signal pathway, and it could be a candidate therapeutic target.

Glioma, the vast majority of intracranial malignant tumors, is characterized by rapid proliferation and aggressive invasion [1]. According to the 2016 World Health Organization (WHO) classification of Central Nervous System (CNS) tumors, glioma was divided into low grade glioma (LGG, grades Ⅰ and Ⅱ) and high grade glioma (HGG, grades Ⅲ and Ⅳ)[2]. Despite the advances in therapeutic strategies, combination of surgical resection, radiotherapy and temozolomide chemotherapy, patients suffering from glioma still exhibit poor prognosis. Thus, there have been a growing number of publications focusing on appraising significant index which control glioma risk stratification [3]. Particularly, isocitrate dehydrogenase 1 (IDH1) mutation is written in the amended 2016 WHO classification of CNS tumors [4]. However, the difficulty in defining all patient outcomes based on the traditional biomarkers suggests an urgent need to identify new clinicobiological markers to assess patient prognosis.

Recently, there has been a growing recognition of the vital links between long non-coding RNAs (lncRNAs) and cancers [5, 6]. Remarkably, emerging articles have shown that lncRNAs are involved in regulation of glioma malignant behaviors [7, 8]. By retrieving TCGA database, we discovered that expression of linc01023 was up-regulated in glioma, however, the molecular mechanisms of linc01023 in glioma remain unclear.

Insulin like growth factor I receptor (IGF1R) is an inducible transmembrane tyrosine kinase receptor that often activated in several types of cancer including glioma [9]. Previous studies have demonstrated that IGF-1R activates the phosphoinositide 3- kinase (PI3K)/AKT signaling pathways and promotes glioblastoma cell proliferation and survival by ligand binding [10]. In the current study, we profiled linc01023 expressions in glioma tissues and cells. We also confirmed glioma patients with high expression of linc01023 indicated poor prognosis. Moreover, linc01023 depletion inhibited glioma cell proliferation, migration and invasion by regulating IGF1R/AKT pathway in vitro and in vivo. Above all, restoration of IGF1R/AKT pathway reversed the inhibitory effects of linc01023. The results above offered encouraging targets for glioma therapy.

We studied 169 glioma tissues and 30 normal brain tissues (NBTs) from patients suffered traffic injury in the Department of Neurosurgery and Pathology, Shengjing Hospital of China Medical University (Liaoning, China). The inclusion criteria used to screen patients were as follows: (1) patients underwent surgery in Shengjing Hospital from October 2008 to October 2017; (2) tumors were confirmed by histopathology as glioma. Patients were excluded if they met any of the following criteria: (1) patients received radiotherapy or chemotherapy before operation; (2) patients combine other tumors; (3) recurrence case; (4) simple pathological biopsy case. After excision, the specimens were put in liquid nitrogen immediately. The clinical data, including pathological grade, ECOG score, sex, age and IDH1 mutation were collected according to the 2016 classification of glioma. Moreover, we registered the date of deaths resulted from glioma. The interval time from the diagnosis date to death was recorded. We gained permissions from all the patients. The study was approved by the Ethics Committee of Shengjing Hospital (No. 2018PS300K). The median of linc01023 expression in glioma tissues was used to distinguish high and low expression of linc01023.

In vivo study, sh-linc01023 and NC were ligated into the LV3-CMVGFP-Puro vector (GenePharma). Then, LV3-CMV-GFPPuro-sh-linc01023 and its NC vectors were generated. We used ViraPower Packaging Mix to generate Lentivirus in 293FT cells. After infection, the cells expressing sh-linc01023 were obtained. Five-week-old BALB/C athymic nude mice were purchased from the National Laboratory Animal Center (Beijing, China). After stably transfected with sh-linc01023 or sh-NC, U87 and U251 cells were respectively injected into the right flanks subcutaneous in a dose of 5×105 per group. Tumor volume was measured every 4 days using the formula: volume (mm3)= length × width2/2. The subcutaneous tumor-bearing mice were executed 40 days after injection. As for intracerebral orthotopic inoculation, 3×105 cells were stereotactically implanted to the right striatum of nude mice (n=8, each group). The number of survivals was counted daily. Kaplan-Meier survival curve was made to conduct the survival analysis.

The proliferation, migration, invasion and western blot data were expressed as means ± standard deviation (SD) from at least three independent experiments. Significant differences were determined using the GraphPad 7.0 software (USA). Survival curves were calculated using the Kaplan-Meier method. A chi-square test was applied to calculate the correlation of linc01023 with clinical data. Univariable and multivariate Cox analysis were applied to analyze the prognostic value of clinical data, respectively. We applied SPSS 17.0 software for chi-square test, univariable and multivariate Cox analysis. P < 0.05 was regarded as statistically significant.

Upregulation of linc01023 in glioma tissues and glioma cell lines

To detect the clinical significance of linc01023 in glioma, we analyzed publicly available lncRNA datasets of glioma from The Cancer Genome Atlas (TCGA). As shown in Figure 1A, linc01023 level elevated in high grade glioma tissues (HGG) and low grade glioma tissues (LGG) compared with normal brain tissues (NBTs). We then detected linc01023 expression levels in our clinical glioma tissues and glioma cells by qPCR. The results indicated that linc01023 expression was positively correlated with the progression of glioma pathological grades (Figure 1B). And linc01023 was up-regulated in U87 and U251 glioma cell lines compared with normal human astrocytes (NHA) (Figure 1C). Thus, we hypothesized that high expression of linc01023 may be associated with the progression of glioma.

Association of linc01023 with WHO grade

Besides the high expression of linc01023, we analysed other factors might correlate with the survival time. The results revealed that age > 50 (P = 0.007), HGG (P < 0.001), as well as IDH mutation (P < 0.001) were the significant factors correlated with the survival time (Table 3). Multivariable Cox analysis indicated that the high expression of linc01023 was an independent prognostic factor for shorter survival in patients with glioma (P = 0.011). Furthermore, WHO grade (P < 0.001) and IDH mutation (P = 0.012), were obviously associated with the survival of patients with glioma (Table 4). 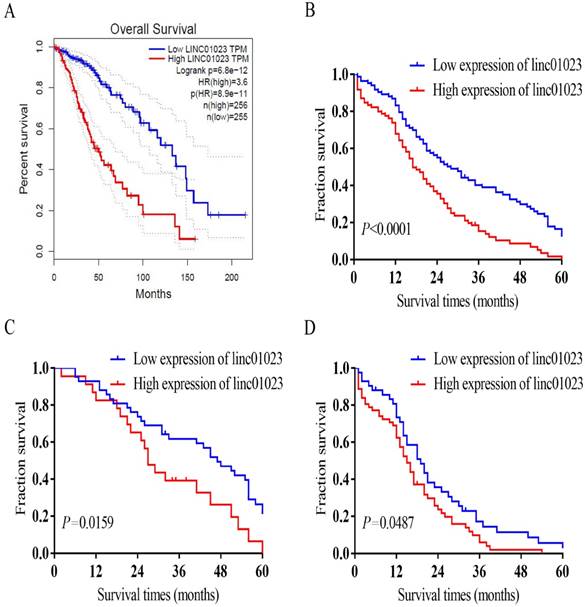 Univariate analysis of prognostic factors in glioma for overall survival

Multivariate analysis of prognostic factors in glioma for overall survival

Inhibition of linc01023 restrained glioma cell proliferation, migration and invasion. A Relative expression of linc01023 after U87 and U251 glioma cells transfected with sh-linc01023 plasmids and scrambled vectors (NC). B CCK-8 assay to investigate the effect of linc01023 knockdown on proliferation of U87 and U251 cells. C Quantification number of migration and invasion cells treated with inhibition of linc01023. Representative images and accompanying statistical plots were presented. Data are presented as the mean ± SD (n = 3 in each group). *P < 0.05 versus sh-NC group (empty vector). Scale bars represent 20 mm. 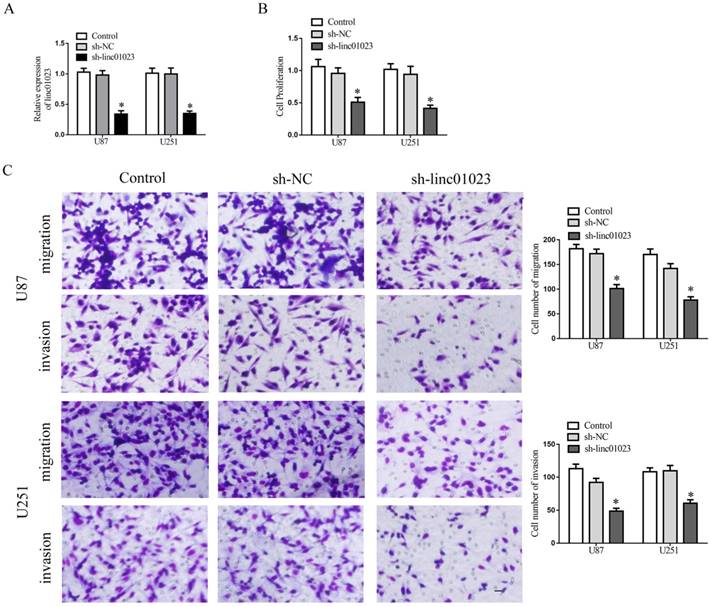 To determine the molecular mechnism of linc01023 inhibiting proliferation, migration and invasion in glioma, we detected the pathway changes in sh-linc01023 glioma cells. As shown in Fig. 4A, knock-down of linc01023 significantly restrained the activity of IGF1R/AKT pathway.

To further validate the glioma growth inhibition of linc01023 in vivo, we injected U87 and U251 cells transfected with sh-linc01023/sh-NC into BALB/c nude mice. As shown in Fig. 5A-B, in contrast to sh-NC group, sh-linc01023 group produced smaller tumor. Moreover, the survival analysis showed that sh-linc01023 group exhibited longer survival time (Figure 5C). 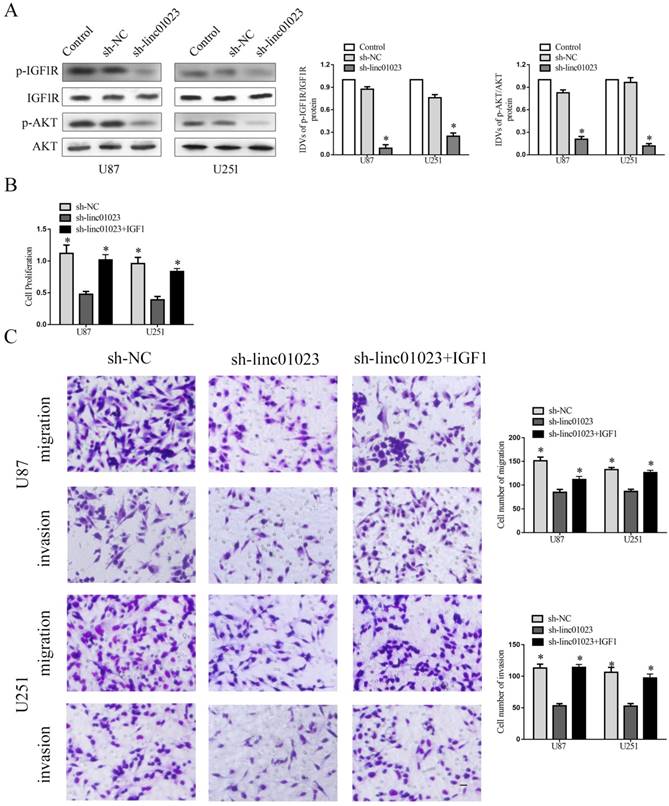 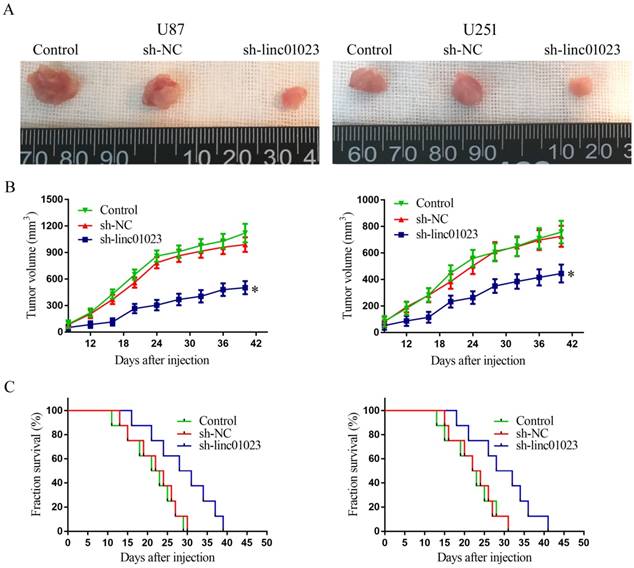 Glioma is the most common neoplasm that threatens people's health for the malignant progression and poor prognosis in the brain [15]. According to the WHO CNS tumors classification of 2016, the prognosis of glioma patients is significantly determined by both histological parameters and specific molecular markers. In the present study, we discovered that linc01023 expression elevated in in glioma tissues and cells. In addition, elevated linc01023 expression indicates short survival times in patients with glioma. Furthermore, knock-down of linc01023 restrained the proliferation, migration, and invasion of glioma cells. The in vivo study indicated the sh-linc01023 group manifested smaller tumor and longer survival time.

Currently, mounting evidence has indicated that lncRNAs are involved in regulation of glioma malignant behaviors by modulating signaling pathways [16]. However, the roles of linc01023 in glioma remains blurred. In this study, we discovered that linc01023 was highly expressed in glioma tissues and cells for the first time. Then, we clarified that linc01023 expression was definitely correlated with the WHO grades and IDH1 mutation. In addition, Kaplan-Meier survival analysis illustrated patients with high expression of linc01023 manifested short overall survival. Consistently, many earlier study also have illuminated that lncRNAs correlates with overall survival in glioma. For example, long non-coding RNA AFAP1-AS1 is up-regulated in glioma, and its expression is correlated with glioma grading and KPS scores [17]. Moreover, long non-coding RNA PVT1 is up-regulated in glioma and serves as an indicator of glioma prognosis [18].

In summary, our study revealed that linc01023 acted as an oncogene in glioma. Elevated linc01023 expression was a biomarker of poor prognosis in glioma patients. Knock-down of linc01023 restrained the proliferation, migration, and invasion of glioma cells by regulating IGF1R/AKT pathway. The study demonstrated the crucial roles of linc01023 in the pathogenesis of glioma, accordingly, provide a new potential therapeutic target for glioma therapy and a prognostic marker.