Programmed death ligand 1 (PD-L1) expression provides significant value to predict prognosis and response following immunotherapy in several types of cancers. However, its clinicopathological and prognostic significance in melanoma remains unclear. PD-L1 and the number of tumor infiltrating lymphocytes (TILs) were investigated in 63 Korean patients with melanoma based on the melanoma scoring system. We also compared the results using the PD-L1 antibodies—22C3 and E1L3N clones. In addition, BRAF gene mutation was detected using anti-BRAF antibody and real-time polymerase chain reaction. Overall, 29 (46.0%), 16 (25.4%), and 18 (28.6%) patients exhibited the acral lentiginous type, nodular type, and other histological subtypes of melanoma, respectively. PD-L1 expression was detected in 37 (58.7%) cases and was closely associated with a CD8+TILhigh phenotype (P < 0.001). Combined survival analysis depending on PD-L1 and CD8+TILs status showed that the PD-L1-/CD8+TILhigh group demonstrated the best survival outcome, whereas patients with PD-L1+/CD8+ TILlow showed the worst prognosis (P = 0.039). However, PD-L1+/CD8+ TILlow was not an independent prognostic factor. The 22C3 and E1L3N clones showed a high concordance rate (kappa value, 0.799). BRAF mutation status was not correlated with PD-L1 expression. We suggest that evaluation of the combined status of PD-L1 and TIL might be useful to predict the survival of patients with melanoma.

Melanoma is a highly malignant skin tumor and a leading cause of cancer-related mortality in Western countries, ranking as the fifth most common cancer in the USA [1, 2]. The incidence and pathogenesis of melanoma both show variation according to ethnicity [3], with a lower incidence of melanoma in Asians than in Caucasians, and the predominant location of the tumor also differs according to race [4].

Melanoma is classified into several histological subtypes associated with various molecular and clinicopathological characteristics [5]. The most common types of melanoma in Caucasians are found on sun-exposed portions of the skin, such as nodular melanoma and superficial spreading melanoma. In contrast, acral lentiginous melanoma that occurs on non-sun damaged areas is the most common subtype detected in Asians [6, 7]. Chronic sun-damaged forms of melanomas are associated with NRAS, BRAF non-V600E, or KIT mutations, whereas non-sun-damaged melanomas are associated with a predominance of BRAF V600E mutations [8]. Therefore, research on melanoma must take variations among races and subtypes into consideration.

Several multi-institutional clinical trials have indicated a survival benefit of programmed death 1 (PD-1)/programmed death ligand 1 (PD-L1) blocking agents in patients with melanoma [9, 10]. Accordingly, anti-PD-1/PD-L1 therapy has recently become the most important melanoma treatment. The United States Food and Drug Administration (FDA) approved the anti-PD-1/PD-L1 drug nivolumab as the first-line treatment for patients with BRAF wild-type advanced melanoma [11, 12]. PD-1 is an immune inhibitory receptor expressed on activated lymphocytes [13, 14], and interaction with its ligands PD-L1 and PD-L2, which are expressed in both tumor cells (TCs) and immune cells, plays a pivotal role in the tumor's ability to escape from immune attack [14]. Hence, inhibition of the PD-1/PD-L1 axis can be a powerful therapeutic strategy to promote the immune response to invading cancer cells.

Even if PD-L1 expression is not correlated with the response to PD-1/PD-L1 inhibitors in melanoma patients, it is still necessary to precisely assess the potential clinical role of PD-L1 expression in melanoma. Therefore, in the present study, we evaluated the PD-L1 status in Korean melanoma patients using an FDA-approved antibody (22C3; Dako, Carpentaria, CA, USA) as well as another commercially available PD-L1 antibody (E1L3N; 1:50, Cell Signaling Technology, Danvers, MA, USA). The PD-L1 expression status was quantified using a scoring system specific to melanoma with relation to its expression on both TCs and/or TILs [21].

A total of 63 patients diagnosed with malignant melanoma from March 2006 to February 2013 at Seoul National University Bundang Hospital were enrolled in this study. Thirty-six (57.1%) patients underwent surgical excision and 27 (42.9%) patients underwent punch biopsy. All cases were classified based on histologic type such as acral lentiginous, nodular, and other melanoma subtypes. Patients who had preoperative chemo-radiation therapy were excluded from the study. Clinical information and pathologic characteristics were compiled from medical and pathologic records. The assessment of clinical nodal and metastasis stage was determined in 58 cases based on the radiologic and pathologic evaluation. The clinical stage could not be determined for seven cases due to follow-up loss and refusal of further radiologic evaluation.

For TMA construction, we selected representative regions of tumors, and core samples with a 2-mm diameter were transferred to recipient blocks and re-embedded, as described previously (SuperBioChips Laboratories, Seoul, South Korea) [22]. In primary lesion, we selected the tumor area with the invasive border for including TILs. In addition, considering that tumor reactive immune cells infiltrate the metastatic melanoma via vascular endothelial cells, we obtained tissue from the tumor center with intratumoral blood vessels for the metastatic lesion.

This study was approved by the Institutional Review Board of Seoul National University Bundang Hospital (IRB number: B-1807-481-302). For this type of study, formal consent was not required. 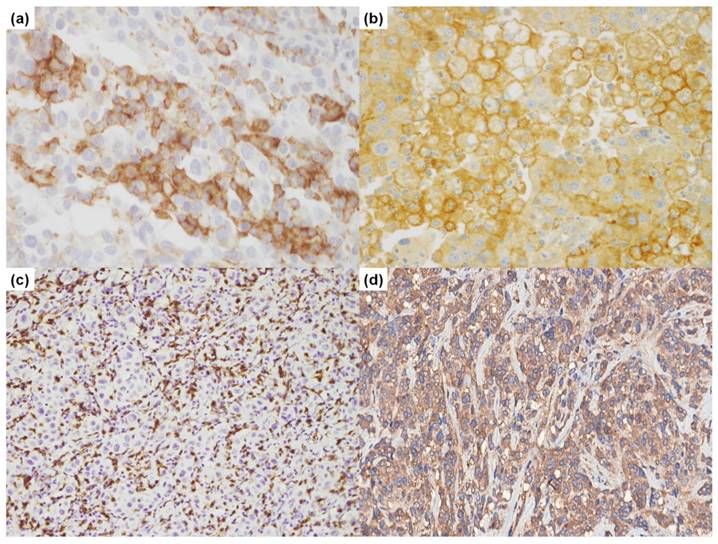 PD-L1 expression in TCs and TILs 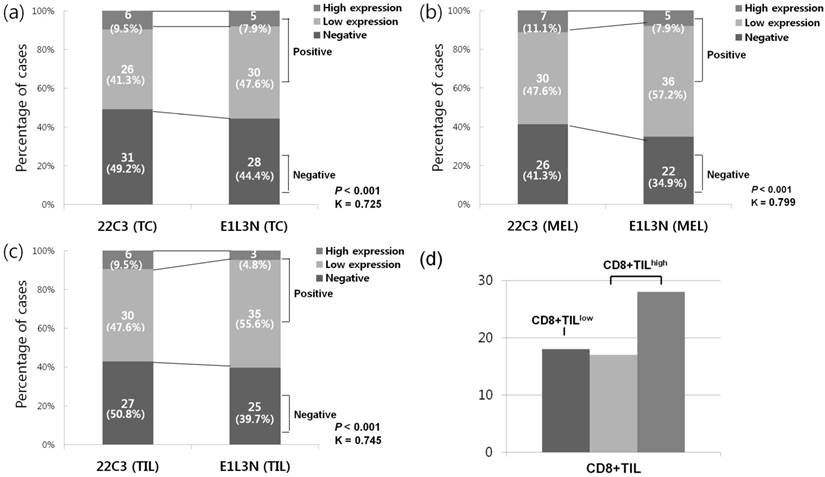 Kaplan-Meier analysis was performed to evaluate patient survival curves according to PD-L1 and CD8+TIL status. In Kaplan-Meier analysis, there was no significant difference in overall survival (OS) depending on the PD-L1 expression status in TCs or TILs using both antibodies. When evaluated according to the MEL scoring system, PD-L1 (22C3) expression status was also not significantly correlated with patient prognosis (P = 0.793). Although the CD8+TILhigh group showed a tendency toward more favorable OS than the CD8+TILlow group, this result did not reach statistical significance (P = 0.117). We additionally analyzed the survival differences depending on the combined status of PD-L1 (22C3) and CD8+TIL. Patients with PD-L1(22C3)-/CD8+TILhigh and PD-L1(22C3)+/CD8+TILhigh showed a significantly more favorable OS, whereas the PD-L1(22C3)+/CD8+TILlow group was associated with the worst clinical outcome (P = 0.039). Furthermore, a distinct survival difference was maintained when the PD-L1(22C3)+/CD8+TILlow subgroup was compared to the others (P = 0.010). PD-L1 (E1L3N) expression also showed no significant association with OS (P = 0.355; Figure 3C). However, similar results were obtained to those using the 22C3 clone in combined analysis, in which the survival of patients with PD-L1(E1L3N)-/CD8+TILhigh and PD-L1(E1L3N)+/CD8+TILhigh expression was significantly more favorable, while the PD-L1(E1L3N)+/CD8+TILlow group showed the worst clinical outcome (P < 0.001) (Figure 3).

However, multivariate Cox proportional hazards analysis showed that PD-L1+/CD8+TILlow was not an independent prognostic factor in melanoma patients (Table 3). 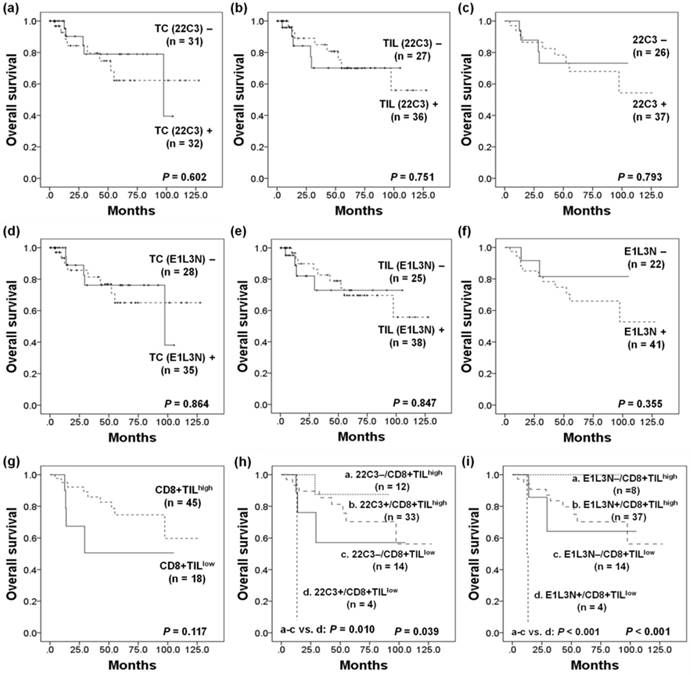 Recent studies indicated that PD-L1 expression correlated with the presence of oncogenic driver mutations. For example, PD-L1 expression was found to be significantly associated with EGFR-mutated non-small cell lung cancers [34], IDH-1-wild type glioblastomas [35], and BRAF-mutated colorectal cancers [36]. However, BRAF mutation status does not correlate with PD-L1 expression in melanoma [37], which was confirmed in the present study.

PD-L1-expressing TILs and TCs have important clinicopathological implications in various cancer types [38-44]. In urothelial carcinoma, analysis of PD-L1 (22C3 and SP263) expression in both TILs and TCs was used as a complementary diagnostic assay for anti-PD-1/PD-L1 treatment (pembrolizumab and durvalumab). Therefore, PD-L1 expression in TILs should not be overlooked. Notably, we adopted the MEL scoring system for determining the PD-L1 expression status in both TCs and TILs, which is based on modified criteria from a scoring system for hormone receptor status in breast cancer and was used in a recent clinical trial of melanoma [21].

IFN-γ is an essential inflammatory cytokine and is considered one of the most significant regulator of PD-L1 expression. Previous studies have shown that activated CD8+T cells are the major source of IFN-r production [45-48]. Notably, Tumeh et al. suggested that the type of TILs, particularly CD8+ cytotoxic T cells, is important for the action of immune checkpoint inhibitors [46]. Considering the importance of CD8+TILs in tumor immune microenvironment, we assessed correlation between CD8+ TILs and PD-L1 expression in our study.

TILs tend to be associated with a favorable prognosis in several types of cancer, including melanoma [23, 32, 49]. Moreover, Teng et al. [50] suggested that cancer can be categorized into four distinct subgroups, based on the status of PD-L1 and TILs. Melanoma patients with PD-L1+/TILhigh (type I group) are considered to have adaptive immune resistance, and PD-L1-/TILhigh (type IV group) seems to induce immune tolerance via the non-PD-1/PD-L1 pathway. PD-L1-/TILlow (type II group) is associated with immune ignorance. Finally, the rare PD-L1+/TILlow (type III group) phenotype is associated with oncogenic PD-L1 expression. In the present study, the combined status of PD-L1 and TILs, but not PD-L1 status alone, was significantly associated with clinical outcome. The PD-L1-expressing melanoma patients without TIL had the worst survival overall. However, PD-L1+/TILlow did not appear to be an independent factor for poor survival according to multivariate analysis, which might be due to the small number of patients. Although PD-L1+/TILlow was not an independent prognostic factor, combined analysis of both PD-L1 expression and TILs might predict survival differences in melanoma patients.

In our study, PD-L1 expression in TILs (but not TCs) was observed in 50.8% of the cases. However, the survival difference according to PD-L1 positivity in TILs was not statistically significant (data not shown), in contrast to the results of Ren et al. [31]. This discrepancy can be explained by several factors. First, our study included patients with various subtypes of melanoma, not only the acral subtype. Second, unlike the previous study, we used the FDA-approved PD-L1 assay (22C3).

Since different expression patterns of PD-L1 have been reported according to the type of antibody used, we compared the detection rates with two antibodies (22C3 and E1L3). Although other researchers showed that different PD-L1 antibodies can produce varying positivity rates [51, 52], we found a high degree of concordance between 22C3 and E1L3N, in line with a previous study [53].

A relatively small patient population in a single institute, heterogeneous histological subtypes, and evaluation of a small tumor section of TMA are some of the limitation of this study. PD-L1-expressing melanoma patients without TILs seem to be only identified in a very small population (about 1%) [50]. In the present study, only four cases were identified as PD-L1+/CD8+TILlow. Due to limited number of cases in each group, including the PD-L1+/CD8+TILlow group, we could not be certain of the prognostic impact of PD-L1 and TIL status using multivariate analysis. Thus, further studies are needed in a larger cohort of melanoma patients, based on the race and histological subtype, to validate the prognostic significance of combined status of PD-L1 and TILs. Nevertheless, our results obtained using the MEL scoring may support the prognostic value of PD-L1 expression in melanoma patients.

In conclusion, we found that the combined status of PD-L1 and TILs was associated with survival outcome in Korean melanoma patients, although it cannot act as an independent prognostic factor. Our results suggest that an integrated analysis of both PD-L1 and TILs might be useful for predicting prognosis in patients with melanoma.

44. Irie RF, DeNunzio FD. Immunotherapy of melanoma: current status and prospects for the future. The Journal of dermatology. 1993;20:65-73