Prognostic value of site-specific metastases in lung cancer: A population based study

Background: Studies on prognosis of different metastasis sites in patients with lung cancer are limited. The aim of present study was to investigate the prognostic value of metastases sites among patients with metastatic lung cancer.

Methods: Between 2010 and 2014, patients diagnosed with metastatic lung cancer were selected using the Surveillance, Epidemiology, and End Results (SEER) database. Kaplan-Meier methods were adopted and multivariable Cox regression models were built to compare the prognosis of different metastasis sites.

Lung and bronchus cancer is the leading cause of cancer mortality worldwide [1, 2]. According to the latest update of cancer statistics in the United States in 2018, a total of 234,030 estimated new lung and bronchus cancer cases will be diagnosed; both the incidence of males and females are the second highest among all cancer types [2]. Because of the lack of screening programs in most countries, more than half of lung cancer patients are diagnosed at an advanced stage [3]. Metastatic lung cancer is a debilitating disease that results in a high burden of symptoms and poor quality of life; the estimated prognosis after the diagnosis has been established was less than 1 year until a few years ago [4-6]. At the present, the new targeted therapies are changing the course of this disease, especially for patients having tumors presenting some gene mutations drivers, like mutations activating EGFR [7, 8], ALK translocation [9, 10], ROS rearrangement [11, 12]. However, advanced lung cancer remains an incurable disease, with a poor prognosis for the majority of patients.

In patients diagnosed with advanced lung cancer at initial diagnosis or during follow-up, the most common metastatic sites is lung, followed by the lymph nodes, the brain, the bones, the adrenal glands, and the liver. Oftentimes, lung cancer will spread to more than one area of the body. Due to the differences in biological heterogeneity and treatment strategies, the survival of patients with various metastatic sites is variable[13, 14]. Therefore, knowledge of the patterns of distant metastasis is crucial to personalize the treatment and follow-up strategies. Population-based cancer registries provide an excellent opportunity to investigate the relationship between the patterns of distant metastases and prognosis in metastatic cancer [15, 16]. However, the prognostic value of metastatic sites in lung cancer was only studied in small samples, and the results were controversial [17-21].

In this study, we investigated the relationship between different metastatic sites and cancer-specific survival (CSS) of stage IV lung cancer registered within the surveillance, epidemiology, and end results (SEER) database.

The following data were collected from the SEER database with SEER*Stat 8.3.5: age at diagnosis, gender, tumor grade, tumor size, histology, radiotherapy, chemotherapy, sequence number, surgery of the metastases, CSS status, survival months. CSS was defined as the time from the date of diagnosis to the date of death caused by CRC. T stage was restaged according to the 8th edition TNM stage system [22]. Histology was classified as small cell lung cancer (SCLC) and non-small cell lung cancer (NSCLC). Chemotherapy was denoted as yes or none/unknown, radiotherapy was divided into yes or refused or unknown according to SEER code. This study was approved by the Institutional Review Board of Huashan Hospital, Fudan University.

The Chi-square (χ2) test was used to compare the clinicopathological features among different sites of metastases. Survival rate was calculated using Kaplan-Meier curves, and the differences were evaluated using the log-rank test. Multivariate Cox regression analyses were utilized to recognize the specific factors that influence CSS. All statistical analyses were performed with SPSS 22.0 (SPSS Inc., Chicago, IL, USA). All confidence intervals (CIs) were stated at the 95% confidence level. Statistical significance was defined as P<0.05 (two-sided).

The flow chart of eligible patients' selection in present study. 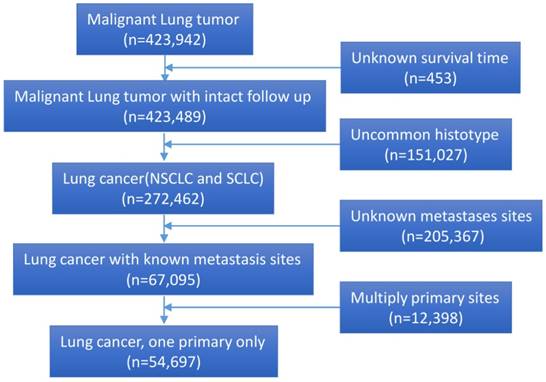 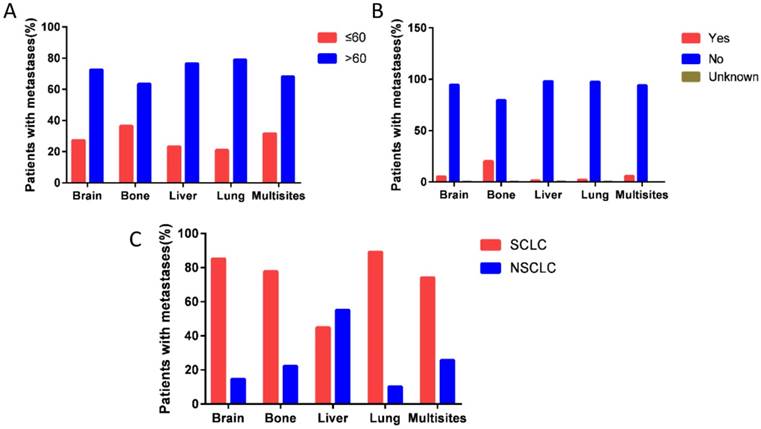 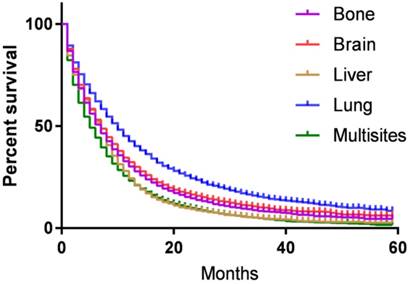 Kaplan-Meier curve of cancer-specific survival based on different histotype. Metastases sites were associated with survival in both (A) NSCLC and (B) SCLC (P<0.001).

Distant metastases at the time of presentation of lung cancer are a frequent clinical problem. It is reported that approximately 30-40% of NSCLC patients and 60% SCLC present with metastatic disease at the time of diagnosis [23-25]. Previous population-based study indicates that the prognosis of several metastatic cancers differs according to the site of metastases [15, 16, 26]. However, the prognostic value of metastatic sites in metastatic lung cancer remains controversial. Some studies indicated that the site of involvement did not associate with survival [18-20], while other researchers reported that metastasis to specific organs appear to affect prognosis [21, 27, 28]. Finkelstein et al demonstrated that patients with bone and liver metastases exhibited shorter survival compared to those with other metastatic sites [21]. Sorensen et al reported that patients with brain metastasis were identified as independent prognostic factors in NSCLC patients [27]. Hoang et al uncovered that liver metastases were unfavorable prognostic factors in metastatic NSCLC [28], while Bauml et al reported that those with bone metastasis had a poor prognosis treated with target therapy [29]. Hence, it is important to clarify the prognostic value of different metastatic sites in lung cancer.

The results of present study have some important implications in clinical practice. First, we systematical described the survival characters of metastatic lung cancer with different metastatic sites, which may help us to make accurate assessment of metastatic lung cancer. Second, brain and bone metastases were not unfavorable prognostic factors in present study. Several previous studies suggested that patients diagnosed with bone and brain metastases have unfavorable survival outcomes [27, 30, 31]. Most of the studies were published in early years. The survival of patients with brain and bone metastasis has improved steadily these years, and may be partly attributed to the early diagnoses of metastatic lesions and new treatment strategies [4, 32, 33], such as increasing use of stereotactic radiosurgery alone for patients with limited brain metastases instead of whole-brain radiotherapy [32]. Third, patients diagnosed with liver metastasis had the worst survival in those with isolated organ metastasis in our study, which was consistent with previously studies [21, 28]. Liver metastatic diseases are always multiple lesions [34], and the majority of NSCLC patients with liver metastasis do not respond well to chemotherapy [35, 36]. Moreover, some patients with liver metastases cannot tolerance to chemotherapy due to liver dysfunction [37]. We should acknowledge that there are some limitations in our study. First, the SEER database only included four specific sites of distant metastases, and we could not compare the survival with other metastatic sites, such as adrenal metastasis. Second, there was a lack of details about chemotherapy, targeted therapy, which may cause bias. Third, the gene expression status, such as EGFR, is not available; we cannot adjust it in survival analysis. Fourth, some other information, such as family history, follow up protocol were also missing in SEER database, which may cause bias in present study. However, this is a large population based study, and the design of the present study is more like real world study, such limitation will not impair the power of our conclusion.

This study used the linked SEER database. The interpretation and reporting of these data are the sole responsibilities of the authors. The authors acknowledge the efforts of the SEER Program tumor registries in the creation of the SEER database.

This research was supported by the National Science Foundation of China (No. 81802374). The funders had no role in the study design, data collection and analysis, decision to publish, or preparation of the manuscript.