Background & Aims: To evaluate the efficacy and timing of secondary prophylactic endoscopic therapy for variceal bleeding. To determine the long-term survival and identify the prognostic factors in patients with hepatocellular carcinoma.

Conclusions: Ligation combined with cyanoacrylate could be preferred for HCC patients presented with both esophageal and gastric varices. BCLC C/D stage predicted shorter survival times and bleeding relapse, while male gender was an independent predictor of poor survival.

Esophagogastric variceal bleeding represents a common complication in patients with hepatocellular carcinoma (HCC). Tumor infiltration could aggravate portal hypertension, resulting in the development of collateral circulation and esophagogastric varices (EGV). A previous study showed that 63.3% of the HCC patients have concomitant varices, associated with a higher risk of death from bleeding 1, 2. The presence of EGV was an independent determinant of the patient prognosis. Thus, the natural history and prognosis of HCC patients with EGV are different from those without, but few studies have focused on this specific group3.

Patients with HCC are seldom cured and have limited survival. Bleeding from EGV in these patients is a lethal complication, which might become a terminal event if left untreated or no further prophylactic measure is taken. Patients with advanced HCC often present with portal thrombosis, metastasis or poor liver function, making surgery or transjugular intrahepatic portosystemic shunts (TIPS) difficult and inappropriate. Propranolol might negatively impact survival in patients with cirrhosis and refractory ascites4. In many cases, endoscopic therapy is the only feasible therapeutic option. In addition, maintenance ligation lowers the recurrent bleeding rate if patients have an adequate hepatic reserve5.

The purpose of this study was to evaluate the efficacy and timing of endoscopic therapy for EGV bleeding in patients with HCC and identify the potential prognostic factors for long-term survival in these patients.

A retrospective study was conducted. Patients admitted to our hospital between January 2008 and December 2014 for acute variceal bleeding and previously diagnosed with HCC were included. Exclusion criteria were: (1) No history of variceal bleeding. (2) Previous endoscopic treatments for EGV before the occurrence of HCC (3) Co-morbid diseases that greatly compromised survival like uremia or malignancy other than hepatocellular carcinoma. The protocol of the study was approved by Ethics Committee of Zhongshan Hospital, Fudan University (approval No.: B2012-028, date of review: May 22, 2012) and conforms to the provisions of the Declaration of Helsinki.

The diagnosis of HCC was based on the histopathological data obtained from surgical resection or persistent elevated serum α-fetoprotein (AFP) levels and characteristic imaging findings (CT, MRI and/or hepatic angiography). We used the Barcelona Clinic Liver Cancer(BCLC) grading system6 to further classify the patients. Cirrhosis was histologically determined in combination with the results of laboratory and radiological analysis. The Child-Pugh score7 as calculated for each patient to evaluate liver function. The laboratory results were obtained within 3 days before the first endoscopic treatment.

All patients enrolled in this study were followed up until death or December 31, 2014 and monitored for rebleeding, survival and any causes of death.

The treatment strategy for HCC was dependent on the individual disease state and preference, including hepatic resection, transcatheter arterial chemoembolization (TACE), radiofrequency ablation (RFA), radiotherapy, percutaneous ethanol injection (PEI), chemotherapy, palliative treatment or a combination of any of these therapies.

All patients were administered topical anesthesia with 2% lidocaine and premedicated with an intravenous injection of propofol (10ml). An electronic endoscope GIF-XQ240/H260 (Olympus, Tokyo, Japan) was used for screening and treatment. Esophageal varices (EV) were categorized according to the classification of the Chinese Society of Gastroenterology and Chinese Society of Endoscopy, 8 where Mild (G1) varices are denoted by linear or slightly tortuous, red color sign(-); Moderate (G2) varices are denoted by either1) linear or slightly tortuous with red color sign(+) or 2) serpentine-like dilation with red color sign(-); and Severe (G3) varices are denoted by either1) serpentine-like dilation with red color sign(+) or2) pearl, modular or tumor-like dilatation. The location of the gastric varices(GV) was classified according to Sarin 9, 10 as lesser curvature varices(GOV-1), greater curvature varices(GOV-2) or both (GOV-3).

Endoscopic injection sclerotherapy (EIS): The intravariceal or paravariceal injection of 10 to 30 ml of lauromacrogol (Tianyu Pharmaceutical, China) per session was administered through the injection needle (Olympus NM-200L-423, Japan). The initial injections were administered at 2-3 cm above the gastroesophageal junction.

Endoscopic injection of tissue adhesive (N-butyl-cyanoacrylate, NBCA): After flushing the needles with isotonic sodium chloride solution, the intravariceal injection of NBCA (Beijing Suncon Medical Adhesive Co., Ltd)was performed to target the GVs. Each injection contained different quantities of NBCA (0.5-2.0 cc), as needed, and an equal volume of lipiodol or 20% glucose.

All patients presenting with active GI bleeding received continuous intravenous infusion of vasoactive drugs before endoscopic therapy and maintained for 5 days or at least 24h without signs of re-bleeding. Follow-up endoscopy was performed at 6-8-week intervals, unless the patient missed an appointment, and therapy was repeated when necessary until complete obliteration was achieved.

During the follow-up period, 102 patients (51.7%) presented with an episode of rebleeding. The cumulative 6-month, 1- and 5-year rebleeding rates were 40.9%, 49.3% and 71.2%, respectively (Figure 2A). 16 patients presented with failure to control acute bleeding, which was defined as bleeding relapse within 5 days after the initial endoscopic procedure, while primary hemostasis was achieved in 91.7% of the patients. We investigated the potential risk factors that could influence prognosis. Table 2 summarized the results of the Cox multivariate analyses. The results indicated that different endoscopic procedures did not influence the risk of rebleeding (EVL vs non-EVL, P=0.572). However, BCLC C/D stage (P=0.048, HR=1.53, 95% CI 1.003-2.327) was independent predictors for the relapse of bleeding in these patients (Figure 2B).

Baseline characteristics of the patients

Study flow diagram. The flow diagram showed the inclusion of the patients in our study and gave reasons for non-participation at each stage. 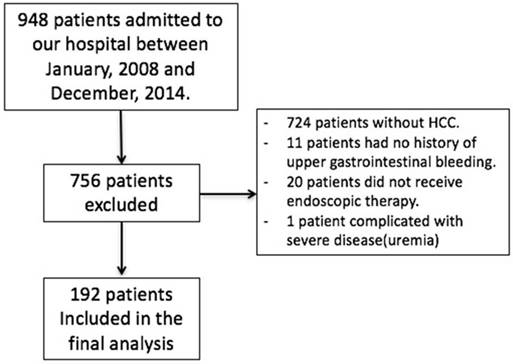 A total of 98 patients (51.0%) died during follow-up, with a median survival time of 18.6 months (see Figure 3 for Kaplan-Meier analysis). Among these patients, 72 patients (37.5%) died of GI bleeding. The 6-month, 1- and 5-year overall cumulative survival rates were 66.5%, 54.2% and 34.3%, respectively. During the follow-up period, no major complications or endoscopic therapy-related deaths were observed.

Rebleeding and death of patients devided by different management for EGV 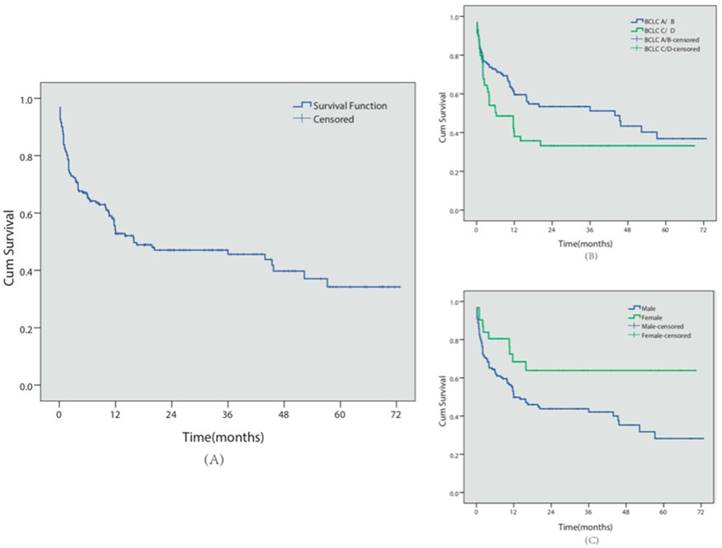 Most patients with HCC have advanced liver cirrhosis and portal hypertension. Tumor infiltration could cause high frequency portal vein thrombosis, contributing to an increase in portal venous pressure. EGV rupture could aggravate hepatic function or because bleeding associated with death and other lethal complications. The actual incidence of HCC, presenting with variceal bleeding, remains unknown, although incidences ranging from 1% to 15% have been reported11.

As shown in some studies, HCC patients with variceal bleeding had an in-hospital mortality rate of 20.5%.These patients were expected to have a significantly worse survival outcome than general HCC patients (median 3.5 months vs. 7.5 months), suggesting that the presence of EGV greatly impacted survival and could potentially cause bleeding associated with death, even before HCC deterioration12, 13. Endoscopic treatments as secondary prophylaxis in EGV have long been recognized14, but the effects of these treatments on HCC patients have been seldom studied. Keiji M, et al. reported that prophylactic sclerotherapy for EV prolonged the long-term survival of HCC patients, but had no beneficial effects on patients with poor disease status15. In a recent study that evaluated outcomes in HCC patients after rebleeding prophylaxis, Ripoll et al stated that even though secondary prophylaxis failure was more frequent and survival significantly shorter in patients with HCC, secondary prophylaxis still offered survival benefit. Lack of prophylaxis increased rebleeding and mortality16. Overall, few studies have focused on this specific group of patients.

In recent years, several models have been proposed to predict survival in patients with HCC, including the Italian score (CLIP), the French classification (GRETCH) and the Barcelona (BCLC) staging system 17. Although the overall predictive ability of these systems was not satisfactory, the BCLC staging system has been used as a reference model, as this system associates staging with treatment modalities and the estimation of life expectancy. Consistently in our research, despite that portal hypertension potentially affected the prognosis, the BCLC staging system was still the independent predictor of survival in this subgroup of HCC patients. Furthermore, BCLC staging system showed significant effects on the prediction of rebleeding risk, reflecting the similar demographic and clinical characteristics of our patients compared with general HCC patients. Male gender is associated with poor prognosis, which is consistent with previous studies. In comparison, female patients tend to have more favorable pathological feature of HCC upon initial diagnosis and a greater likelihood to undergo curative therapy18, 19.

Previous studies suggested no superiority of combined EVL and EIS plus cyanoacrylate injection for variceal bleeding in cirrhotic patients. However, we included certain subgroup of patients with HCC20, 21. In the present study, different endoscopic procedures did not influence the risk of rebleeding in patients with EV alone. Nevertheless, in those with both EV and GV, ligation combined with sclerotherapy plus cyanoacrylate injection was associated with a decreased rebleeding and mortality rate, which suggested combination therapy should be preferred for those patients. Emergent endoscopic therapy has also been shown to be less superior than delayed procedure, in terms of patient outcome and rebleeding rate. Stabilization with pharmacological therapy may be more suitable upon an acute variceal bleeding episode 22, 23.

The study had several limitations. In our study, 7 patients (3.6%) were lost to follow up despite our best effort, which could impair the integrality of data and thus influence the validity of the study. Besides, since it was a retrospective study, unmeasured or residual confounding like memory bias might be present. Since it was an observational study and no intervention was involved, many patients did not receive gastroscopy screen after relapse of bleeding. Thus, nor the exact cause of rebleeding either the rate of variceal related bleeding or death could be further confirmed. Last but not least, there were only 2 Child-C patients (1.0%) in our study, so it would be cautious to extend our results only in patients with rather reserved liver function. Although age was not a significant factor for rebleeding and survival in the present study, elderly patients are often associated with poor prognosis. Thus, it is important to consider age and other comorbidities when assessing disease prognosis.

In conclusion, the present study demonstrated that for HCC patients complicated by variceal bleeding, combination ligation and sclerotherapy could be preferred for those with concomitant EV and GV. BCLC C/D stage predicted shorter survival times and bleeding relapse, while male gender was independent predictors of poor survival. Start time of the initial endoscopic procedure did not affect efficacy.

Professor Shiyao Chen has access to the data and control of the decision to publish. He is accepting full responsibility for the conduct of the study. The authors thank the members of Professor Shiyao Chen's laboratory team for their participation in the discussions to this work.

The present study was partly supported by the Innovation Fund of Shanghai Scientific Committee (15411950501) and the Science Fund for Young Scholars of Zhongshan Hospital (2016ZSQN11).

8. CSoHaCSoE CSOG. Consenus on prevention and treatment for gastroesophageal varices and variceal hemorrhage in liver cirrhosis. Chinese Journal of Hepatology. 2008;8:10