The optimal strategy of multimodality therapies for resectable gastric cancer: evidence from a network meta-analysis

Background: Controversy continues regarding the optimal strategy of multimodality therapies for resectable gastric cancer. The aim of this network meta-analysis was to determine the efficacy of surgery combined with neoadjuvant or adjuvant chemotherapy (CT), radiotherapy (RT), and chemoradiotherapy (CRT) by integrating the direct and indirect method.

Methods: A systematic search for randomized controlled trials (RCTs) was performed through Medline, Embase, CENTRAL, and PMC databases. Overall survival (OS) was the primary outcome of interest. A Bayesian network meta-analysis was conducted and treatments were ranked based on their effectiveness for improving survival.

Conclusions: Our study showed no significant survival advantage for neoadjuvant CRT, though the highest probability of being the best treatment was observed. Further clinical trials are essential to determine the value of neoadjuvant CRT, especially in D2 lymphadenectomy subgroup.

Gastric cancer (GC) represents the fifth most prevalent malignancy and the third leading cause of cancer mortality worldwide [1]. Surgery is still the only potential curative treatment, and the 5‐year survival rate of patients received curative surgery remains ranging from 24% to 45% [2, 3]. Multiple treatment options including surgery-based neoadjuvant and/or adjuvant therapies have been applied to improve the survival of GC patients in the past several decades.

However, insufficient studies evaluated the comparison between these treatment options and reported conflicting results [11, 12], the comparison among these options remained unknown. Thus, in the current study, we designed a network meta-analysis to evaluate the efficacy of different treatment options in treating resectable GC patients and compared by integrating the previous trials.

Medline, Embase, the Cochrane Central Register of Controlled Trials (CENTRAL), PMC database and the abstracts from the American Society of Clinical Oncology and European Society for Medical Oncology were systematically retrieved up to June 30, 2017. The search strategy consisted of the medical subject headings (MeSH) and key words for GC and treatment options. Additionally, the reference lists from eligible trials and review studies were also screened manually. All the included studies should be in accordance with ethical standards of the responsible committee on human experimentation and the Helsinki Declaration of 1964 and later versions. Two authors (SCY and PLW) conducted the process of the literature search independently. Disagreements were resolved through the group discussion.

The inclusion criteria for this meta-analysis was performed as follows: (i) prospective randomized controlled trials (RCTs); (ii) patients with pathologically proven as gastric or esophagogastric junction cancer (EGJ); (iii) pair-wise comparison of treatment modalities grouped as surgery combined neoadjuvant/adjuvant treatments (CT, RT, or CRT), and surgery alone; (iv) sufficient data to extract hazard ratios (HRs) to evaluate survival difference; (v) studies published in English. Patients with unresectable, metastatic, or recurrent disease were excluded. If trials with multiple publications were retrieved, the most recent reported one was included to obtain the longest follow-up. We excluded the articles that enrolled esophagogastric junction cancer along with esophageal cancer because of unextracted data of esophagogastric junction cancer alone.

The following study characteristics were recorded for each included study: (i) basic study information, including the first author, publication year and country; (ii) pathological and demographic characteristics, including gender, age, histopathological type, TNM stage and lymphadenectomy information; (iii) research protocol, including regimens compared, intervention schedules and the number of patients in each group; (iv) outcome indicators, including follow-up information and survival data. All articles were evaluated for risk of bias using the Cochrane Risk of Bias tool, which classified studies into three categories. Two reviewers independently completed data extraction and quality evaluation for each eligible study.

Overall survival (OS) was selected as the primary endpoint which was measured using hazard ratio (HR) with its 95% credible intervals (95% CrIs). Assessment of treatment efficacy were derived first from direct pairwise comparisons in RevMan software version 5.2 for statistical analysis. In order to obtain robust results, the random effects model was performed. Next, a Bayesian network meta-analysis was performed using JAGS and the GeMTC package in R software (https://drugis.org/ software/r-packages/gemtc). For studies with more than two arms, we considered the correlation between the relative therapeutic effects using the approach reported by Woods [13]. Consistency between direct and indirect evidence was assessed by comparing the pooled HRs from traditional pair-wise comparisons with corresponding results from the network meta-analyses. Moreover, the probability of each treatment being the best was calculated by ranking the relative efficacies of all regimens based on its posterior probabilities. All statistical tests were 2-sided with α of 0.05.

Description of the Included Studies

Fifty-six RCTs contained 12,435 patients were included in our meta-analysis through the systematically literature review (Fig. 1). Among the eligible studies, patients received seven different treatment regimens containing surgery alone or surgery-based treatment which involved in adjuvant CT, adjuvant RT, adjuvant CRT, neoadjuvant CT, neoadjuvant RT, and neoadjuvant CRT (Fig. 2). The primary features of the included studies were summarized in Supplementary Table S1. Almost trials were randomized with two comparator arms, in addition to one study comprising three arms involving adjuvant CT, adjuvant RT and surgery alone [8]. The main clinicopathologic characteristics of the enrolled patients in the included studies were showed in Supplementary Table S2. There was a high degree of consistency among the patients among the studies. The average age of the patients ranged from 55 to 65 years old; and the majority of patients were stage II-II. 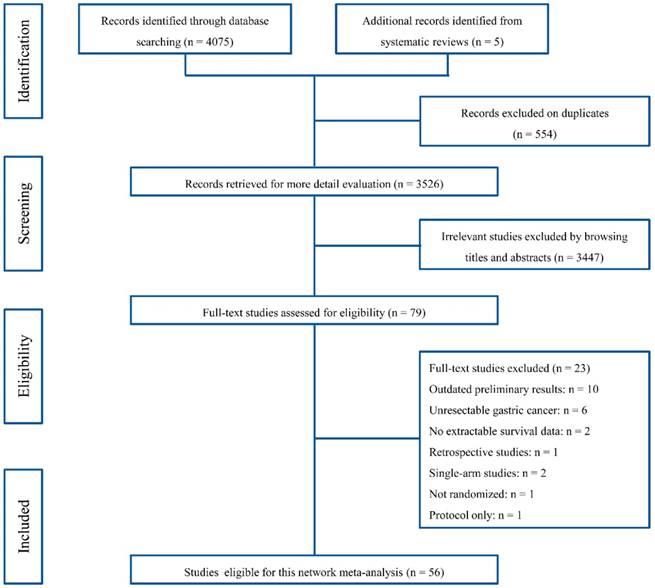 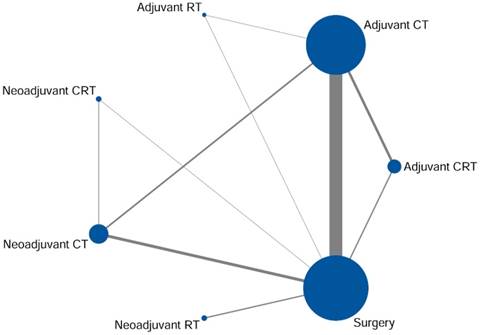 Major Toxic effects (grade 3 and above)

Minimal bias was found among majority of studies by using the Cochrane risk of bias tool. Risk of bias summary by domain and each study was showed in Supplementary Fig. S3. No studies showed high risk bias in the integrity of outcome data and comprehensiveness of the report, which was impersonal and had a relatively low bias.

We evaluated the consistency between direct and indirect comparisons with node-split models and the results showed that no significant inconsistency for OS (all P > 0.05, Supplementary Fig. S4).

D2 lymphadenectomy, accepted as the standard operation for advanced GC in both Asian and Western, is associated with lower loco-regional recurrence and cancer-specific death [14]. Actually, surgery alone cannot achieve a biological cure for advanced GC, even though the extended lymphadenectomy is performed. Adjuvant and neoadjuvant therapies are generally accepted to eradicate microscopic disease, result an additional 10%-15% survival benefit based on the curative surgical resection [15].

Adjuvant CRT gained much popularity in the United States since the results of INT-0116 study reported [4]. Thereafter, D2 lymphadenectomy combined with adjuvant CT has become the standard treatment in Asia mainly based on the ACTS-GC and CLASSIC trials [6, 7]. Our results also found that adjuvant CRT and CT were superior to surgery alone. These results confirmed the necessity of postoperative adjuvant treatment. For adjuvant RT, non-significant result was observed when compared with surgery alone. Additionally, the comparison between adjuvant CRT and adjuvant CT also showed non-significant results. Subgroup analysis showed that adjuvant CRT was superior to surgery alone but positive results were not found in adjuvant CT for patients with D1 lymphadenectomy. Several previous studies also showed that the advantages of adjuvant or additional RT could be observed in patients with lymph nodes metastasis, D1 resections and positive margins [16-18]. These results elucidated that postoperative RT may serve as a supplementary treatment option when combined with adjuvant CT.

Notably, the overall analysis indicated that neoadjuvant CRT was significantly superior to other therapeutic strategy in terms of the rank probability of being the best selection. However, subgroup analysis of D2 lymphadenectomy showed that patients with neoadjuvant CRT seemed to be correlated with a better but a nonsignificant survival advantage. With the highest probability of being the best treatment, the level of evidence for neoadjuvant CRT was downgraded from high to moderate, as the CrI crossed the unit [21]. Since the tumor has not changed the anatomical location and is rich in vascularization before surgery, the neoadjuvant CRT is more effective and sensitive. Moreover, smaller irradiated volumes and therefore less toxic reactions were observed lead to well tolerant for patients received preoperative RT [15]. Thus, more feasibility and safety neoadjuvant CRT resulted in higher rate of pCR and R0 resection [22-24]. In the ongoing prospective trials, TOPGEAR trial was designed to compare neoadjuvant CRT with neoadjuvant CT followed by postoperative CT with D2 lymphadenectomy. Until this result is available, our data presented here providing an evidence of support neoadjuvant CRT.

The phase III MAGIC and FNLCC/FFCD trials confirmed that perioperative CT was superior to surgery alone and was widely used in Europe [2, 5]. Unfortunately, fewer than 50% patients completed the postoperative chemotherapy in these two trials, mainly because of the surgical complications and nutrition status [5]. Even though the higher R0 resection and pCR rates were achieved, unsatisfied recurrence rate, especially the distant recurrence rate, were obtained in patients received neoadjuvant CT/CRT [2, 5, 10, 25]. A previous retrospective study reported that postoperative CT gained more survival benefit than observation for patients received neoadjuvant CRT [26]. This result further confirmed the superiority of the perioperative treatment pattern. Future trials should consider the difference and evaluate the neoadjuvant and perioperative treatment properly.

Several limitations should be acknowledged in present study. The trials included in our study lasted for a long period and the improvement of treatment schedules or technique may affect our findings. We evaluated the consistency with node-split models and showed relatively well transitivity. Moreover, our study used all information from published data other than individual patient data, which might influence the accuracy of assessment, even though we obtained part of information from previously individual patient data meta-analysis [30]. Additionally, some certain endpoints like disease-free survival and disease-specific survival could not obtain from published studies, which might influence our analysis. Several studies investigated the treatment both in esophagogastric junction cancer and gastric cancer. However, part of trials could not obtain the subgroup data for these two tumor sites. Thus, we may not evaluate the effects of treatment in different tumor location. Furthermore, it was difficult to implement subgroup analysis stratified by different regions (Asia, Europe and the US), because studies in different areas were inadequate. Most Asian and European trials used D2 lymph node dissection, while the US studies focused on D1 lymph node dissection. Therefore, subgroup analysis of lymph node dissection may partly reflect the subgroup results in different regions.

This work was supported by National Natural Science Foundation of China (No.81772549 and 81572334 to HMX, No.81602522 to JYH). The funders had no role in study design, data collection and analysis, decision to publish, or preparation of the manuscript.

All procedures performed were in accordance with the ethical standards of the responsible committee on human experimentation (institutional and national) and with the Helsinki Declaration of 1964 and later versions. Informed consent or an appropriate substitute was obtained from all patients prior to inclusion in the study.