Background: Ovarian cancer (OC) is one of the most common malignancies in women. Advanced bone metastases (BM) commonly result in the poor prognosis. We aim to evaluate the prevalence and associated factors for the de novo BM development and prognosis in OC.

Materials and methods: The present study was a cohort study that used the United States based National Cancer Institute's Surveillance, Epidemiology, and End Results (SEER) database. SEER documented OC patients, diagnosed between 2010 and 2015, were included in the present study. Univariable and multivariable logistic regression analyses were employed to identify associated factors for BM development. Kaplan-Meier analysis was used to estimate the overall survival and multivariable proportional hazard regression was used to identify the prognostic factors for OC patients with BM.

Conclusion: Bone metastasis is rare in ovarian cancer patients. The factors associated with BM development and prognosis can be potentially used for BM early screening and individualized treatment.

Ovarian cancer (OC) is one of the most common malignancies in women, which accounts for 2.5% of cancers in women [1-2]. Approximately 13,850 women died from OC annually, being one of the leading reasons for cancer deaths in women in the United States and the 5-year survival rate for women with all types of ovarian cancer was around 47% [3-5]. More than 60% OC patients were diagnosed at an advanced stage, with de novo distant metastases, which can partly explain the high mortality rate [6].

There are no current routine BM screening guidelines for OC patients. Survival rates are lower than other cancers as OC lacks specific early symptoms, which delays diagnosis and treatment [10]. In order to improve BM identification and provide early screening for BM, the study focused on the risk factors of BM occurrence in OC.

Early estimation of the prognosis for metastatic OC can help the physicians to develop targeted treatment regimens. Prophylactic treatment and attentive nursing care can be given to the patients with high risk to improve the prognosis. However, limited studies on the survival estimates of bone metastatic OC patients were performed before.

National Cancer Institute's Surveillance, Epidemiology, and End Results (SEER), as the largest publicly available cancer dataset, covers approximately 30% of the US population and routinely records patients' demographics, tumor characteristics, general treatment, survival time, and annually updated vital status. The primary aim of the present study was to investigate the prevalence and the risk factors of de novo BM in OC in the SEER dataset. The secondary aim was to explore the over survival and prognostic factors of OC with de novo BM.

Adult OC patients were identified using the SEER database. Primary OC patients initially diagnosed between 2010 and 2015 were collected (the details of BM were not recorded before 2010, and the latest data up to date is to December 31, 2015). The site recodes ICD-O-3 (International Classification of Diseases for Oncology-3)/WHO 2008 was restricted as “Ovarian”. The exclusion criteria were as follows: patients younger than 18 years old; diagnosed with carcinoma in situ, benign or borderline tumors, diagnosed at autopsy or via death certificate, unknown information for BM or follow-up. SEER*Stat 8.3.5 software (https://seer.cancer.gov/data/) was used to generate the case listing.

It was a population-based cohort study. The prevalence and associated factors for BM were described using OC patients diagnosed from January 1, 2010, to December 31, 2015. The OC patients with BM were followed up to conduct survival analysis and investigate the prognostic factors.

Patients' demographic and clinical characteristics were defined as follows: age (18-40, 41-64 and ≥65 years), race (white, black and others), marital status (married and unmarried), insurance status (insured and uninsured), laterality (left, right and bilateral), primary tumor stage (T stage: T1, T2 and T3), regional lymph node stage (N stage: N0 and N1), tumor grade (I=well differentiated, II=moderately differentiated, III=poorly differentiated and Ⅳ=undifferentiated and anaplastic), histology (serous and non-serous), cancer antigen 125 (CA-125: normal and elevated), and the presence of lung metastases, liver metastases, and brain metastases. Quantitative data were described as mean ± standard deviation (SD) and the difference between groups were analysed by student's t-test. Categorical data were presented as number and the percentage (N, %) and the differences were tested by Pearson chi-square test. The risk factors for OC patients with initial BM were determined primarily by univariable logistic regression. The characteristics with P<0.05 in the univariable logistic regression analysis were considered as candidates for the multivariable logistic analysis. The overall survival was estimated by Kaplan-Meier method and the difference between distinct groups was compared using the log-rank test. Multivariable Cox regression model, incorporating the significant factors in univariate Cox regression (P<0.05) was conducted for analyzing the independent prognostic factors for BM.

All statistical analyses were performed using SPSS 23.0 (IBM Corporation, Armonk, NY) and all survival curves were conducted by MedCalc 15.2.2. A two-tailed P value <0.05 was considered statistically significant in all analyses.

A total of 32,178 OC patients met the inclusion criteria (Figure 1). The patients' mean age was 61.82 ±14.97 years. Among these patients, 352 OC patients with BM were retrieved, and the mean age of them was 65.61±15.12 years. The demographic and clinical characteristics of the included patients were shown in Table 1.

The flow-chart for the subjects selection in the present study. 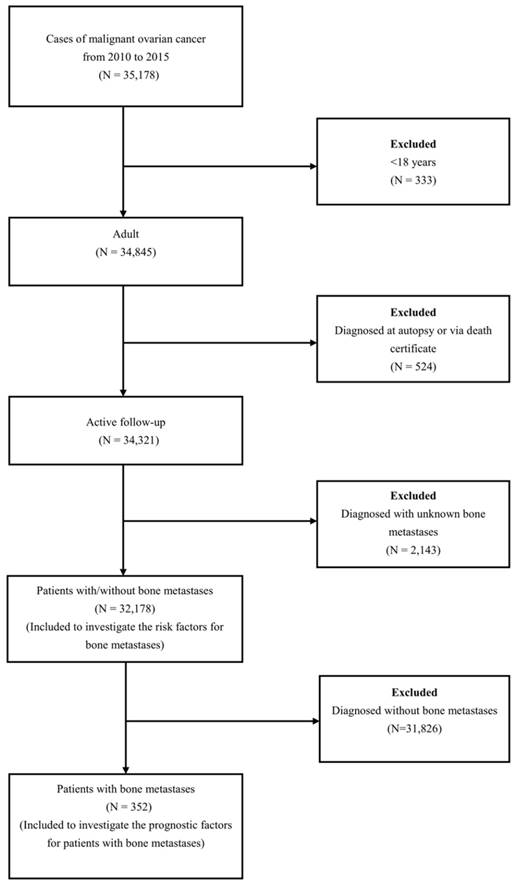 Demographic and clinical characteristics for ovarian cancer patients diagnosed with and without bone metastasis.

One of the greatest strengths of the present study was the large sample size provided by SEER database. With the large population, the present study was the first time looking into both risk factors for BM occurrence and prognostic factors of OC patients with BM. Based on our cohort analyses, 1.09% of the OC patients were diagnosed with de novo BM, which was consistent with previous studies. It was previously reported that the incidence of BM ranged from 1.5% to 3.74% among OC patients [1, 11]. However, the prevalence of BM in OC was 15% in autopsy studies, because approximately 50% of the metastatic sites were asymptomatic [12]. 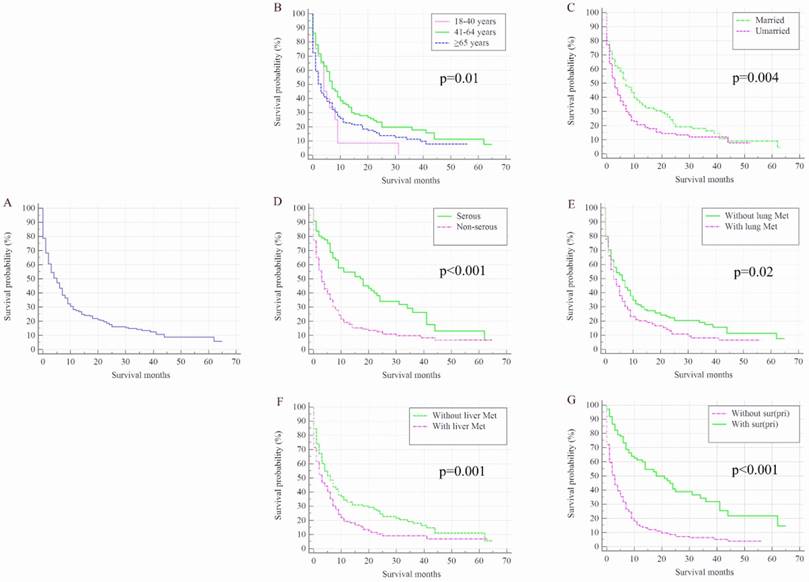 According to our extensive literature review, this is the first time to investigate the associated factors for BM in OC patients. A previous study suggested advanced stage, poor differentiated grade, and lymph node involvement were positively associated with development of distant metastases [7]. The present study added to the literature by showing older age, T2/T1 stage, N1/N0 stage, non-serous and the presence of lung and liver metastases were all significantly associated with de novo BM development. Risk factors identification is important for guiding clinical treatment procedures. The prophylactic treatment and nursing can be given to the OC patients with more risk factors. Screening examinations such as skeletal radiographic scanning and/or PET-CT can be recommended for the patients with high BM risk. A predictive system can be fabricated to quantitively evaluate the probability of the BM development in the future.

The association between histological types and BM development in OC is still controversial. A series of studies reported that the histological types did not affect the development of BM [13-15]. Based on previous autopsy studies with the limited sample size, Abdul-Karim and colleagues reported that BM tends to occur in high-grade carcinomas instead of low-grade cases, and was observed in three cases with papillary serous adenocarcinomas, two mixed adenosquamous carcinomas and one clear cell carcinoma [16]. Julian et al. reported three OC patients with BM, two of them were papillary serous carcinoma and one was with mucinous carcinoma [17]. In the present study with a large sample, we proved that BM has a significant higher probability developed in non-serous OC.

It is acknowledged that this study has several limitations. First, the observed BM incidence has to be interpreted as a strong underestimate of the real figure, this is due to the patients who developed BM later in their disease course were not recorded by SEER dataset. Second, the SEER dataset lacks patient comorbidity profiles such as disease history, skeletal related events (SREs) and the patients' preference to receive surgery, which may partly affect the precision of the results for the prognostic analyses. We found correlation between primary tumor surgery and improved survival among ovarian cancer patients with bone metastases. Due to the insufficient information recorded by SEER on history of diseases and treatment morbidity, external validation is warranted in future. Third, it was not recommended to perform the survival analysis on the SEER cohort as the records of radiotherapy and chemotherapy were lacking [24]. Thus, therapeutic related prognostic analyses were not conducted. Last but not least, the diagnostic modes for ovarian cancer patients with bone metastases cannot be analyzed for data undocumented in the SEER database.

The cohort in our study represents the largest dataset of BM in OC to date and offers valuable information on the epidemiological characteristics and prognosis for BM in the OC patient population. The present study provides a uniquely detailed description of associated factors for BM to improve our understanding of BM in OC and potentially guide its clinical procedures.

Bone manifestation is rare in OC patients. A list of risk factors for de novo BM development in OC were identified, including older age, T2/T1 stage, N1/N0 stage, non-serous and the presence of lung and liver metastases. The prognosis of OC patients with de novo BM is poor, with the median survival being 5.00 months. Non-serous histology was positively associated with overall death. Primary tumor surgery was negatively associated with the overall death risk in the present study, more studies with detailed treatment information are needed to further confirm the results.

We thank Patricia Douglas for editing the language of the manuscript. We thank Yile Lin, Dengming Yan, Xuehang Ge, Jincai Duan, and Chong Zhang for their contribution on collecting data.

Cancer is a reportable disease in every state of the United States. The data in the SEER database does not require informed patient consent. The present study was complied with the 1964 Helsinki Declaration and its later amendments or comparable ethical standards. This study used previously collected deidentified data, which was deemed exempt from review by the Ethics Board of the Tianjin Medical University Cancer Institute and Hospital.

The datasets generated and/or analysed during the current study are available in the SEER repository, https://seer.cancer.gov/data/.

CZ, XG and XW designed the study. WM, LQ and YZ collected the data. XW, XG and XH analyzed the data. CZ, KP, XG, and XW organized the manuscript. VB, LQ, VC, KP, YY, YM and GW reviewed the papers and revised the manuscript. All the authors (CZ, XG, KP, WM, LQ, YZ, XH, VB, YY, GW, VC, XW and YM) have read and approved the final manuscript. All authors contributed toward data analysis, drafting and revising the paper and agree to be accountable for all aspects of the work.

14. Bergman F. Carcinoma of the ovary. A clinicopathological study of 86 autopsied cases with special reference to mode of spread. Acta Obstet Gynecol Scand. 1966;45(2):211-31