Patients and Methods: This consecutive study retrospectively included a group of 393 treatment-naive patients with newly, pathologically confirmed glioma between January 2004 and December 2014. Information on patient age, gender, Karnofsky Performance Status (KPS), tumor grade, tumor size, tumor location, presence or absence of contrast enhancement on MRI and extent of tumor resection have all been collected. The discrete-time survival model integrating survival outcomes within structural equation models was employed to develop and evaluate a comprehensive hypothesis regarding the direct and indirect impact of tumor characteristics on the hazard of death from glioma, mediated by the extent of resection.

Results: Except for tumor location, the indirect effects of tumor grade, contrast enhancement, and tumor size on PFS of glioma through extent of resection were found significant in the model.

Conclusion: This study provides a better understanding of the process through which tumor characteristics is associated with hazard of death from glioma.

Gliomas are the most common type of primary malignant brain tumor1-2, accounting for nearly 80% of the cases3. The treatment modalities for glioma generally encompass of surgical resection, followed by adjuvant chemotherapy and radiotherapy 4-5. Despite aggressive multimodal treatment regimens, the survival of patients with glioma remains dismal6-7, mainly due to its inevitable progression and relapse after initial treatment2, 8-9.

It is relatively straightforward to figure out how some tumor characteristics influence the hazard of death from glioma. For example, the WHO classification of tumors represents a 'malignancy scale' grading scheme20; low-grade gliomas are characterized by a lack of endothelial proliferation and necrosis21. Contrast enhancement on MRI is a specific radiologic feature, has been thought to imply blood-brain barrier is disturbed by invasive tumor cells and suggest a poorer prognosis for glioma22. Larger tumors may have an increasing proliferative ability leading to increasing tumor burden, and subsequently worse survival time23. Nevertheless, there may be other factors that mediate the relationship between tumor characteristics and the hazard of death from glioma.

In this study, the extent of resection (EOR) is proposed as a potential mediator in the association between some tumor characteristics and the hazard of death from glioma. Recent researches emphasize the importance of EOR for survival of glioma 3, 6, 24; maximal safe resection is considered effective to significantly improve survival of gliomas 3, 9. Glioma is known for its infiltrative property; however it is difficult to distinguish the tumor tissue from adjacent normal brain tissue25. Complete resection has been found to be more likely to be achieved in patients with more favorable tumor characteristics26, such as lack of contrast enhancement and smaller tumor size26-27. The glioblastoma multiform (GBM) lesions tend to be irregular in shape and usually include cystic areas, which leads to a lower probability of achieving gross total resection (GTR) 15. Because neurosurgery may not be always feasible because of some tumor locations, it is more likely that GTR be achieved in supratentorial if compared to infratentorial tumors28. As a consequence, residual tumor cell dissemination beyond the margins of resection and resistance to conventional adjuvant therapies lead to the inevitable relapse and increasing hazard of death of glioma29. Whether tumor characteristics plays an indirect role in gliomas survival through the extent of surgical resection remains to be seen.

Given the significant associations between tumor characteristics, extent of resection, the progression (relapse) and outcome (death) of glioma, it is reasonable to hypothesize the extent of resection may mediate the relationship between tumor characteristics and the hazard of death from glioma. However, to the best of our knowledge, no study has investigated this relation. And it is difficult to estimate the indirect effects using conventional survival model such as Cox regression 30-31. In this study, the discrete-time survival model integrated with the survival outcomes within structural equation models30, 32 was employed to develop and test a more comprehensive hypothesis regarding the direct and indirect roles of tumor characteristics on the hazard of death from glioma, mediated by the extent of resection.

This consecutive study retrospectively included a group of 421 treatment-naive patients with newly and pathologically confirmed glioma between January 2004 and December 2014. Patients who had prior history of malignancy or second primary tumor, acute infection or autoimmune diseases, or patients with perioperative surgery-related mortality have been excluded. Clinical information was collected at baseline and regularly updated through follow up. Finally, 28 of these 421 patients have been excluded according to the enrollment criteria, and 393 patients with adequate clinical information were eligible for this study.

Information on patient age, gender, Karnofsky Performance Status (KPS), tumor grade, tumor size, tumor location, presence or absence of contrast enhancement on MRI and extent of tumor resection were collected. The tumor grade of glioma was determined on pathological specimens according to World Health Organization (WHO) international histological classification of central nervous (CNS) tumors20. Gliomas with WHO grade I and II were classified as low grade gliomas, whereas gliomas with grade III and IV were classified as high grade gliomas. Pretreatment contrast-enhanced MRI was performed to obtain the tumor size (the maximum diameter of the glioma) and the presence or absence of contrast enhancement on MRI. Tumor location was categorized as supratentorial and infratentorial areas. The extent of tumor resection was assessed by neurosurgeons according to postoperative MRI. The extent of resection was classified as gross total resection (GTR) or sub-total resection (STR).

Chemotherapy and radiotherapy were recommended as adjuvant therapies after primary tumor resection surgery. Due to economic and general condition reason, a portion of these 393 patients did not receive adjuvant therapy.

Repetitive MRI scan was regularly recommended to study patients, and the information on relapse and survival was updated semiannually through follow-up. Relapse was identified according to latest radiographic evidence. Patients were followed until death or censoring at the end of the study (October 2015). Progression-free survival (PFS) was defined as the time from diagnosis to relapse, death from glioma, or the date of the last follow-up visit.

All patients of this study have been provided written informed consent. This study was conducted with the approval of the medical ethics committees, and in accordance with the principles of the Declaration of Helsinki.

Data analyses were performed using the SPSS 21.0 (IBM, Chicago) and Mplus 7.4 (Muthén & Muthén, Los Angeles) software package. In this study, time-to-event data for glioma relapse or death was modeled using a discrete-time survival model, the relapse or survival time was measured continuously before being subsequently transformed into discrete annual intervals. A series of patients with pathologically confirmed and treatment-naive glioma between January 2004 and December 2014 was followed up till October 2015 in this study. This implied a minimum of 1 and a maximum of 12 annual intervals have been observed in our study, and we truncated at 10 as the number of death per year turned negligible after this point.

The latent hazard variable underlying 10 binary time-specific event indicators was described in right part of Fig. 1. Each event indicator had a value of 1 if it (relapse or death for PFS) occurred during this time period and 0 if otherwise. The remaining event indicators were encoded as missing once the event occurred or the patient was lost to follow-up. Ages, genders and KPSs of all patients were included in the model as covariates. The model was analyzed using Maximum Likelihood estimator, and the standard errors (SE) for the indirect effects were estimated using the delta method30.

The model suggests a significant direct effect of tumor characteristics on PFS of glioma. The direct path coefficients were marked in Fig. 1 and relevant information were shown in Table 2. The model indicated that high grade glioma has led to a substantial increase in the hazard of 0.276 SD (compare to low grade glioma). The presence of contrast enhancement led to an increase in the hazard of 0.194 SD, having glioma sited in infratentorial areas (0.088 SD) rather than supratentorial areas were independently and directly associated with increased hazard. GTR reduced the hazard considerably (-0.428 SD, compare to STR).

A structural equation model with a discrete-time survival outcome was used to estimate both the direct effects of tumor characteristics on hazard of death from glioma and the mediating effects of extent of resection in this study. Finding of this study provided a better understanding of the process through which tumor characteristics are associated with hazard of death from glioma.

In the model, high-grade glioma, the presence of contrast enhancement, and infratentorial glioma were found associated with increased hazard directly. Previous studies reported the associations between these tumor characteristics and the survival of glioma using routine survival analysis method (Log-rank test or Cox regression) 11-13, 16. However, the direct and indirect effect paths have not been depicted in existing studies and inter-associations between different tumor characteristics have not been taken into account. The significant inter-relations among tumor grade, contrast enhancement, tumor location and tumor size were also found in this study. 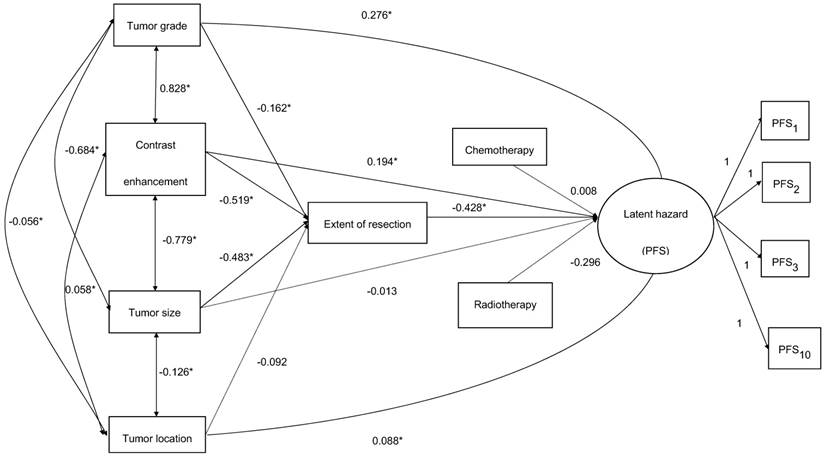 The direct and indirect effect of tumor characteristics on PFS of glioma (Fig. 1)

The models used in this study provided us a method to take a closer look at the mediation effect related to survival of glioma, and yielded more refined and powerful explanation regarding the relation between prognostic factors and survival of glioma.

However, it is worth noting that there are still some issues not covered in our study. Firstly, the moderate sample size of our study suggests that some selection bias may exist. However, the data collection on such a sample size for survival of glioma is by no means easy and valuable information has been unveiled from this data set. Secondly, information of PFS might not be accurate, quantification of PFS is very difficult to obtain. Thirdly, the generalization in this study may not be concurrent with that of other studies. Future large longitudinal studies should be conducted to increase the generalizability of this study.

In this study, the indirect effects of tumor characteristics on survival of glioma through the extent of resection were found to be statistically significant and substantial in size. It reminds us that there is a risk of underestimating the comprehensive impact of tumor characteristics on survival outcome if the direct effects are solely focused. Instead of replicating analyses of the associations between prognostic factors and survival outcome of glioma in an endless series of samples, this approach encourages the progressive enrichment of an explanatory model.

Extent of resection may be the factor that mediates the relation between tumor characteristics and the hazard of death from glioma. A lack of knowledge or understanding of the mediation effects may lead to a neglect of the influence of certain variables and impede a full appreciation of their role in determining outcomes. The findings of this study provide a better understanding of the process through which tumor characteristics are associated with hazard of death from glioma.