Methods: In silico data mining of GEO and TCGA datasets was performed to identify potential target micro-RNA. In vitro and in vivo studies were performed to validate findings.

Renal cell carcinoma is one of the most common urological malignancies worldwide [1]. The clear cell renal cell carcinoma (ccRCC) is the most common subtype of it and therefore studied and known most clearly in biologically molecular mechanisms such as gene mutation, epigenetic modification and the influence of non-coding RNA [2]. The VHL gene is regarded as one of the most important tumor suppressor genes in ccRCC [3]. The loss of protein encoded by this gene can induce the overexpression of HIF1, promoting the proportion of VEGF, EGFR and TGF-а, all of which can stimulate the cell proliferation and angiogenesis [4]. Anti-angiogenic tyrosine kinase inhibitors (TKIs) and antibodies against VEGF and its receptors together with associated molecules stand frontline treatment for metastatic ccRCC, which consists of ~30% of all cases and confers a poor prognosis [5]. Among all TKIs, sunitinib is recommended as first line agents in all major guidelines [6]. Unfortunately, >50% of patients are innately non- responders and almost all initial responders develop resistance over a period of approximate 2 years [7]. Therefore, genetic culprits responsible for resistance may not only serve as biomarker but also provide potential therapeutic target to overcome the conundrum.

MicroRNAs (miRs) are non-coding RNAs that play critical roles in a variety of biological processes. In recent years, miRs have also been shown to play important roles in cancer development mainly by silencing tumor suppressor genes [8]. In ccRCC various miRs associated with different stages of cancer development including oncogenic miRs mediating cell cycle progression, apoptosis, etc. whereas tumor-suppressive miRs combating biologic processes like angiogenesis [9]. In the TKI era, several miRs have been shown to mediate sunitinib sensitivity and resistance [10, 11]. Nonetheless, none of the miRs can now be applicable clinically and the complete regulatory network of miRs associated with sunitinib remains largely unclear.

In the current study, we aim to find potential miRs associated with sunitinib resistance in ccRCC. With reproduction of multiple GEO datasets, we attempted to pinpoint common miRs related to sunitinib resistance and performed in vitro and in vivo validation for our findings. We aim to provide pilot evidence for marker development monitoring sunitinib sensitivity in ccRCC patients.

In silico reproduction of GEO datasets

Three datasets of interest submitted to GEO platform were selected (GSE116251, GSE37766, and GSE66346). All datasets encompassed miRNA-array in either ccRCC patients or mouse models treated with sunitinib and were intended by the submitter to investigate sunitinib-resistance miRs. Significantly overexpressed miRs in all datasets were retrieved and common intersects were analyzed for target miR.

RCC cell lines 786-O, 769-P, A498, ACHN, Caki-1, Caki-2 and OS-RC-2 were obtained from the National Infrastructure of Cell Line Resorce. Sunitinib treatments were added at 5 µM in all single-dose in vitro assays. Overexpression of miR-15b was realized with transfection of miR-15-5p with Lipofectamine system when cells reached 70% confluence for 6 h before medium was refreshed (pmiR-15b). Sequence for siRNA construction against CCNC was reference from TRC (TRCN0000020190) and standard transfection protocol was followed.

The flow cytometry was used to profile cell cycle and apoptosis. The HEPES binding buffer containing Annexin V and PI was applied to the cells for 15 min at room temperature. Samples were then analyzed with BD FACSCanto flow cytometer to determine percentages of apoptotic cells (Annexin V+/PI-). Cell cycle was also studied in trypsinized cells using flow cytometry.

Transwell assay was used to study cell migration. Briefly, cells were resuspended at the density of 1×106/ml in 300μl of serum free medium and seeded in the upper chamber of Transwell without any coating. The lower chambers were then filled with 500μl of complete medium and cells migrated through the membrane were stained with CV and counted.

Colony formation assay was used to profile anchorage-independent growth. Cells were seeded in in medium containing 10% FBS with 0.4% agarose, which was layered on the top of 0.6% agar in medium supplemented with 20% FBS on 60-mm plates. After 2 weeks of culture at 37 ̊C, plates were stained with 0.005% of crystal violet for 1 h. Colonies were counted microscopically and the relative colony numbers were measured.

RCC xenograft mouse models using 786-O cells have been well-stablished by our group. Three groups were set and sunitinib was administrated by oral gavage in a total volume of 150 μL, whilst pmiR-15b and control plasmid was overexpression was delivered to 786-O cells before implantation. All mice were sacrificed on Day 35 and tumors were extracted. Tumor size was calculated with the formula, Length * Width2 * 0.5236.

Comparisons between groups were analysed with the 2-tailed Student's t-test. The P value of 0.05 was accepted as statistically significant.

Overexpression of miR-15b is associated with sunitinib resistance 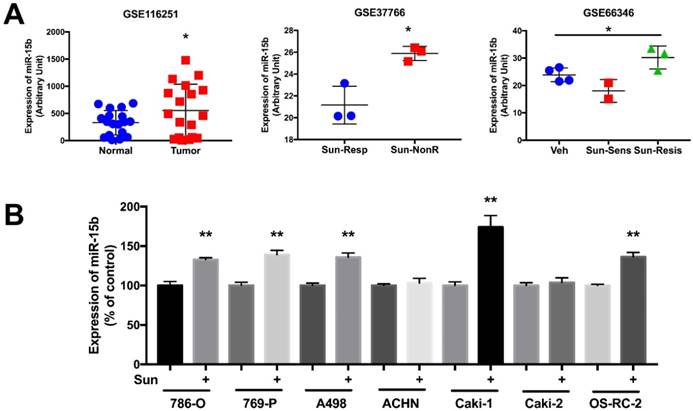 Overexpression of miR-15 mediates resistance to sunitinib. A) Overexpression of mir-15b tagged with GFP showed satisfactory efficiency; B) Detected at 72 h of treatment and transfection in 4 RCC cell lines showing proliferation at different doses of sunitinib (**P < 0.01). 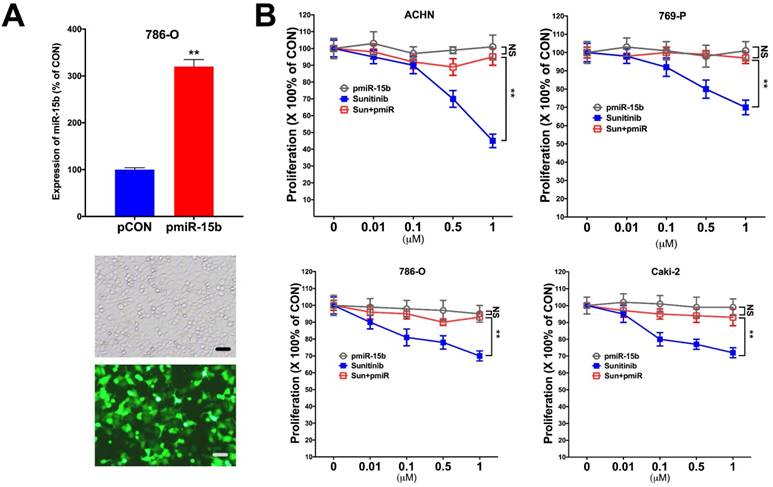 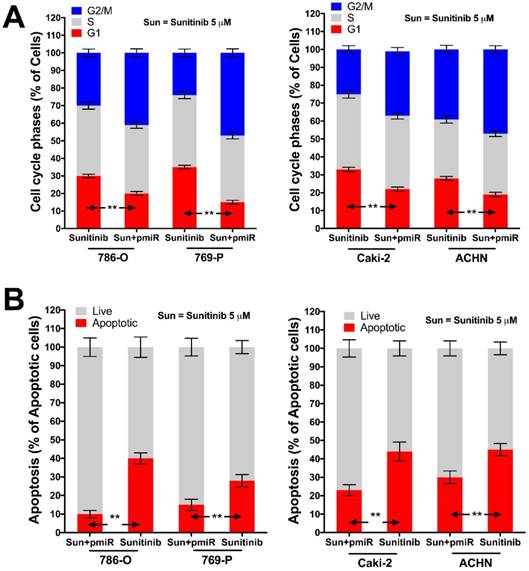 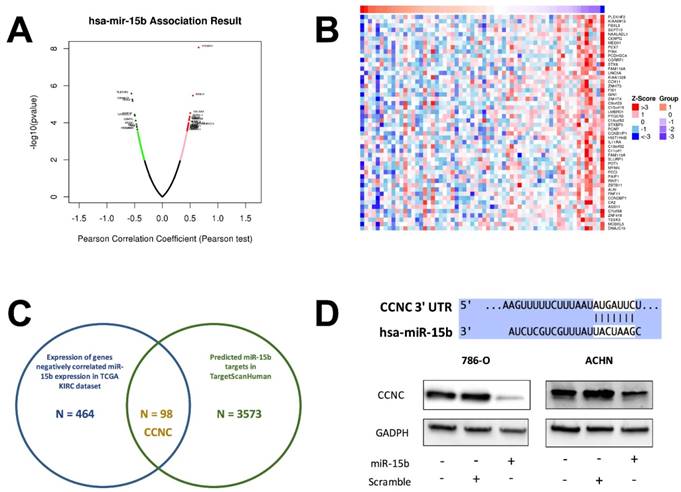 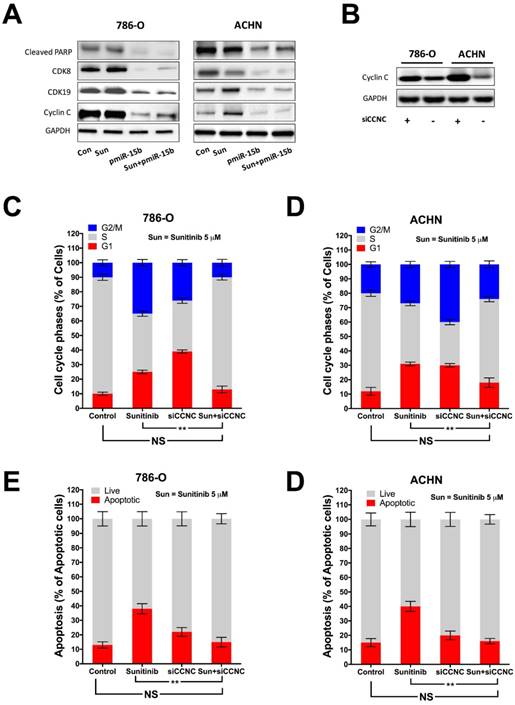 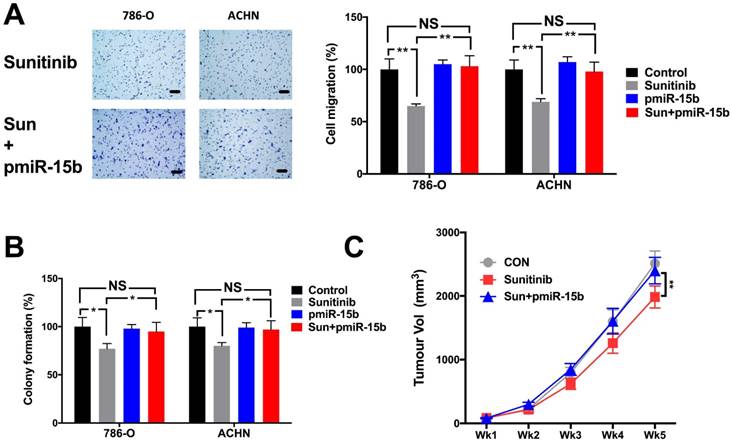 In all, we here show for the first time that miR-15b is associated with sunitinib resistance in RCC. The current study serve as a pilot exploration and therapeutic potential of miR-15b to overcome drug resistance is now in progress by our group.

8. Rupaimoole R, Slack FJ. MicroRNA therapeutics: towards a new era for the management of cancer and other diseases. Nature Reviews Drug Discovery. 2017;16:203-22