Results: Higher levels of local site EVs are found in the lung of smokers and NSCLC patients. Further, over 90% of lung EVs are round vesicles of approximately 50-200 nm, ie., exosomes. There are 21 EV miRNAs up regulated, while 10 miRNAs under regulated, in smokers when compared to controls (relative fold > 2, p < 0.05). These miRNAs were further observed to be dysregulated in NSCLC patients when compared to smokers. Bioinformatic analysis demonstrated that Proteoglycans, Fatty acid biosynthesis, ErbB, Hippo, TGF-beta, Wnt, Rap1, AMPK and Ras pathways were the most prominent pathways enriched in NSCLC EV miRNA signatures. In addition, messenger RNA transcripts including EGFR, KRAS, ALK, MET, LKB1, BRAF, PIK3CA, RET, and ROS1 were significantly higher expressed in lung EVs in smokers and NSCLC patients compared to controls. Long non-coding RNAs, including MALAT1, HOTAIR, HOTTIP, AGAP2-AS1, ATB, TCF7, FOXD2-AS1, HOXA11-AS, PCAF1, and BCAR4, were over expressed in EVs from smokers and NSCLC patients. Furthermore, protein levels of tumor associated antigens including BAGE, PD-L1, MAGE-3, and AKAP4 were significantly dysregulated in EVs of smokers and NSCLC patients compared to healthy controls.

Conclusions: In conclusion, these data demonstrated an intrinsic relationship of smoking dysregulated EVs and EVs contained RNA, proteins which may involve in the development of NSCLC.

Smoking is by far the leading risk factor for lung cancer [1-4]. In the United States, cigarette smoking is linked to about 80% to 90% of lung cancers. Even people don't smoke; breathing in the smoke of others (called secondhand smoke or environmental tobacco smoke) can increase the risk of developing lung cancer. Secondhand smoke is further thought to cause more than 7,000 deaths from lung cancer each year [5, 6]. Non-small-cell lung carcinoma (NSCLC) accounts for about 85% of all lung cancers, which are relatively insensitive to chemotherapy compared to small cell carcinoma [1-4].

Recent studies indicated that membrane-bound extracellular vesicles (EVs; 30-400nm) are important mediators of intercellular communication among different tissues and organs [7]. EVs, found in most bodily fluids, contain proteins, RNA and lipids [7]. Exosomes (~50-200nm) are released through the fusion of multivesicular bodies with the plasma membrane [8]. Exosomes have a role in physiological and pathological intercellular signaling and in a wide spectrum of biological functions [8]. It is currently unknown how smoking affects lung EVs pattern and their microRNA (miRNA) expression. In vitro studies suggest that tobacco smoke increased the release of pro-coagulant tissue factor positive extracellular vesicles by monocytes and macrophages [9], while studies on human subjects rather indicated a decrease in plasma EVs [10, 11]. However, EVs are derived from many different cell types and vary extensively in size. Specifically, EVs encompassing the size range of exosomes, microvesicles and apoptotic bodies have not been investigated extensively in the context of smoking populations. Therefore, we determined the effects of habitual smoking on EVs profile in bronchoalveolar lavage (BAL) fluid and alterations in the NSCLC-related miRNAs, mRNAs, long non- coding RNAs (lncRNAs). We further examined differential expression of tumor associated antigens in EVs from smokers and NSCLC patients.

This work received approval from the institution ethics committee of Tongji Medical College, Huazhong University of Science and Technology.

Clinicopathologic characteristics of smokers and lung cancer patients are summarized in Supplementary materials. Healthy subjects were patients undergoing endoscopy for unexplained upper abdominal complaints, had no reflux symptoms or endoscopic abnormalities, and did not use PPIs. Inclusion criteria for smoker patients required at least a 10 pack-year history of smoking, while the nonsmoker control subjects were self-reported never smokers. Smoking subjects were excluded if they had any significant comorbid conditions such as pregnancy or other acute or chronic disease such as pre-existing asthma, interstitial lung diseases or cardiovascular diseases. NSCLC patients have histologically or cytologically confirmed non-small cell lung cancer not amenable to curative intent therapy or stage IV NSCLC. Exclusion criteria includes patients who are concurrently receiving chemotherapy, biologics, immunotherapy for cancer treatment; as well as systemic anti-cancer treatment or investigational treatment. NSCLC subjects were also excluded if patients have a history of other malignancies within the last 5 years, except for non-melanoma skin cancer or carcinoma in situ of the cervix.

BAL was performed by using standard protocol. The BAL consisted of 2 aliquots of 50 mL of normal saline instilled and aspirated manually using a 60 mL syringe. All subjects underwent conventional bronchoscopy. The BAL fluid was centrifuged at 1500 rpm for 10 minutes at 4°C. The supernatant was aliquoted was stored at -80°C for further EVs analysis.

EVs were isolated as described before [12]. In brief, BAL fluid was subjected to successive centrifugations. EV pellets were resuspended in 0.32 M sucrose and centrifuged at 100,000×g for 1 hour.

To assess differences in lung EVs with smoking, we designed cross sectional cohorts including smokers and NSCLC patients. Isolated BAL EVs were validated according to the International Society of Extracellular Vesicles guidelines [14]. Known EV markers were present in each of the EV samples. The electron microscopy image shows intact, round vesicles of approximately 50-200 nm. A similar size distribution was also confirmed by nanoparticle tracking analysis (NTA) with a peak around 80 nm (Figure 1A). No significant differences were seen between the groups. These data confirm the size, morphology and protein markers that are characteristic of EVs. 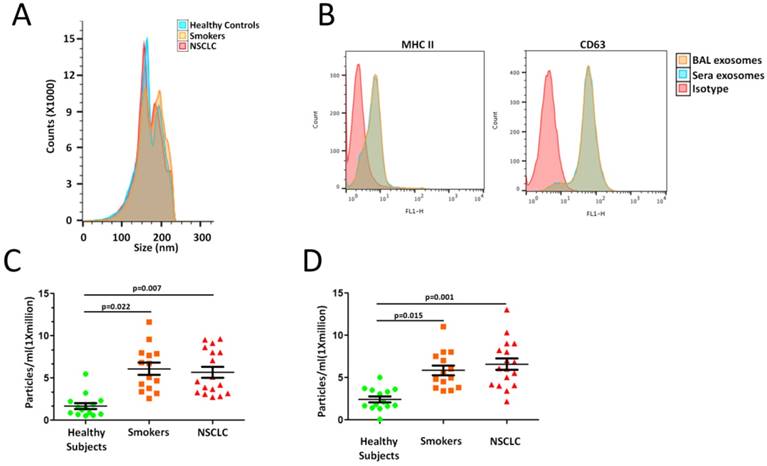 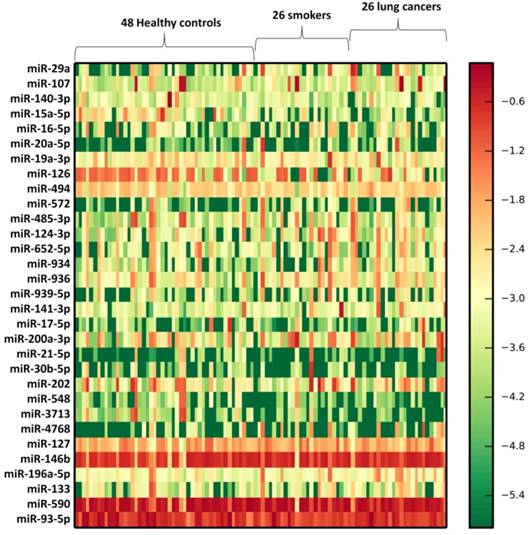 Further, we attempted to examine the presence of long non-coding RNAs (lncRNAs) in exosome and elucidate their roles in smokers and NSCLC patients. We then employed quantitative RT-PCR to detect the expression of lncRNAs isolated from lung exosomes. Nine potential lung cancers associated lncRNAs, including MALAT1, HOTAIR, HOTTIP, AGAP2-AS1, ATB, TCF7, FOXD2-AS1, HOXA11-AS, PCAF1, and BCAR4 were selected for quantitative RT-PCR experiments in 26 smokers, 26 NSCLC patients, and 48 healthy subjects. MALAT1, AGAP2-AS1, ATB, TCF7, FOXD2-AS1, HOXA11-AS, PCAF1, and BVAR4 were found to be present on the exosomes and significantly over expressed in smokers and NSCLC patients (Figure 4).

Tumor associated antigens are associated with NSCLC [16]. Therefore, we analyzed for dysregulation of HLA-class I, AKAP4, BAGE, PD-L1, MAGE-3, and Annexin-A2 in lung exosomes of 5 healthy controls, 5 smokers, and 5 NSCLC patients. Clinicopathologic characteristics of smokers and NSCLC patients are summarized in Supplementary Table 3. We used western-blot to test proteins from lysed EVs. Significant elevation of HLA-class I, BAGE, PD-L1, and Annexin-A2 protein level in smokers and NSCLC patients compared to those from healthy subjects (Figure 5). However, no difference was observed in expression of AKAP4 and MAGE-3 protein levels among the three groups (Figure 5). These data indicated that EV cargo is affected by smoking and may reflect the tumor associated antigens presentation in lung exosomes from smokers and NSCLC.

In this study, for the first time, we have verified the presence of EVs isolated from lung fluid from smokers and NSCLC patients. Smoking is associated with higher levels of local site EVs in the lung. Further, we revealed alterations in the vesicle miRNAs, mRNAs, lncRNAs profiles from smokers and NSCLC, suggesting the importance of EV contents in NSCLC development.

Somatic mutations in EGFR, KRAS, ALK, MET, LKB1, BRAF, PIK3CA, RET, and ROS1 genes are frequently detected in lung cancers. EGFR is known to be a good tumor target in lung cancers. KRAS plays the critical role in growth factor receptor signaling and KRAS gene mutations are usually detected in lung adenocarcinomas [17]. Both EGFR and KRAS genes are responsible for encoding proteins that are embedded in cellular membranes. EGFR or KRAS mutations caused the protein production that is constantly turned on. If these mutations occur in lungs, lung cancer would develop. Rikova et al., [18] reported the MET receptor as the most important members of tyrosinated phosphopeptides in NSCLC tissue samples. V600E (50%), G469A (39%), and D594G (11%) on the BRAF kinase were identified as mutations in lung adenocarcinomas [19]. EML4-ALK fusion was found in NSCLC by Soda et al.[20] in 2007 as a novel potential oncogenic kinase. In our current study, we found that EGFR, KRAS, ALK, MET, LKB1, PIK3CA, and ROS1 were present on the exosome surface and further over expressed in lung exosome from smokers and NSCLC patients (Figure 2). Therefore, smoking induced exosomal mRNA molecules may play an important role in NSCLC. 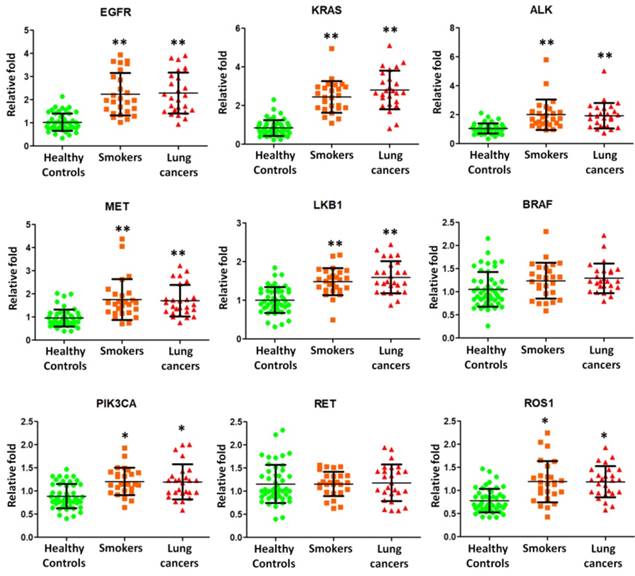 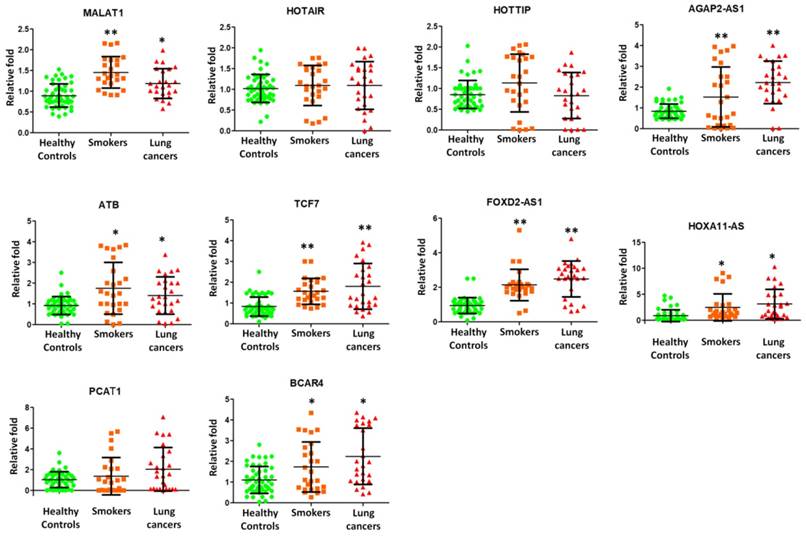 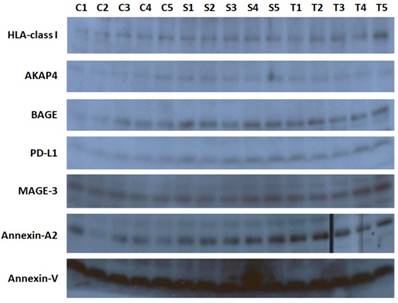 Tumor associated antigens (TAAs) are thought to be an ideal target for cancer immunotherapy [31, 32]. Yasuda et al., identified a tumour associated antigen, annexin A2, in lung cancer patients with asbestos exposure [33]. They further found that the immune response in lung cancer was modulated by annexin A2 and it was also associated with high circulating levels of an inflammatory cytokine IL-6. Mirandola et al [34] discovered that Sperm protein 17, AKAP4 and Pituitary tumor transforming gene 1 were potential immunotherapeutic targets in lung cancer patients. BAGE and MAGE-3 are expressed in lung cancer tissues [35]. MAGE-3 is aberrantly expressed in a wide variety of tumors, including NSCLC. Several CD8+ T-cell epitopes of MAGE-3 have been identified in vitro [35]. Cancer cells can up regulate the surface expression of programmed death-ligand 1 (PD-L1), further interacts with programmed death-1 (PD-1) receptor on T cells to elicit the immune checkpoint response [36]. Exosomal PD-L1 carries active defense function to suppress T cell killing of breast cancer cells [37]. In this study, we found that HLA-class I, BAGE, PD-L1, and Annexin-A2 protein levels are over expressed in smokers and NSCLC patients (Figure 5). These data indicated that EV harbors tumor associated antigens presentation in smokers and NSCLC.

There are still some limitations. Sample size is small because obtaining more blood samples with inclusion criteria in this study is a challenge in our center. Results have to be validated in a larger sample-size cohort including potential confounding clinical variables. Furthermore, there was no functional investigation of the identified miRNAs.

FW, ZYY, LY, and JSF performed the experiments and data analysis. JJX, YJ, JZY, and DZ collected the subject's samples and clinical data. GHY conceived the study and supervised this study. All the authors contributed to the manuscript writing and revision.