Liver kinase B1 (LKB1) is a critical tumor suppressor that is frequently mutated in human cancers. LKB1 has serine/threonine protein kinase activity, which regulates gene expression by phosphorylation of Yes-Associated protein (YAP). The phosphorylation-dependent YAP shuttling is critically important intracellular mechanism in the Hippo pathway. In our previous study, we found that the amplification of hTERC was significant higher in the bronchial brushing cells of patients with lung cancer, however, the underlying molecular mechanism is not clear. In this study, we showed that LKB1 overexpression could phosphorylate YAP and promoted its nuclear rejection. Silencing LKB1 could dephosphorylate YAP and promoted its entry into the nucleus. Here, we found that LKB1 inhibited the mRNA expression and the amplification of hTERC. YAP further up-regulated hTERC at mRNA and gene amplification levels. Therefore, we suggest that LKB1 may inhibit the expression and amplification of hTERC through the axis of LKB1-pYAP(YAP)-hTERC.

Lung cancer is the most common malignant tumor in the respiratory system and the leading cause of cancer-related death worldwide [1].About 85% of lung cancer patients are diagnosed as non-small cell lung cancer (NSCLC). The incidence of NSCLC is on the rise worldwide, which is often diagnosed at advanced stage. Liver kinase B1 (LKB1) also known as serine/threonine kinase 11 (STK11), was first identified as the causal mutation in Peutz-Jeghers Syndrome (PJS) [2]. LKB1 has become recognised as a critical tumour-suppressor gene which has serine/ threonine protein kinase activity, which regulates gene expression by phosphorylation of substrate proteins or binding to target proteins [3]. LKB1 plays an important role in regulating cell growth, cell metabolism, cell proliferation, cell polarity and energy balance in mammalian tissues. Mutation inactivation of LKB1 can cause many human diseases. Functional deletion mutation of LKB1 gene is an important cause of tumorigenesis, and its inactivation is often observed in lung cancer [4], cervical cancer [5], breast cancer [6], and other tumors [3]. Our previous work found that the expression of LKB1 and hTERT was inversely proportional, and LKB1 could regulate hTERT [7]. In lung cancer, the molecular mechanism by which LKB1 affects the expression of hTERC remains to be elucidated.

Hippo signaling pathway, firstly discovered in Drosophila melanogaster [8], is a highly conserved pathway in mammals that maintains organ size and homeostasis in vivo by regulating cell proliferation and apoptosis [8,9]. Yes-Associated protein (YAP) is the downstream effector of the Hippo pathway, which is inactivated through its cytoplasmic retention by phosphorylation [10,11]. Inactivation of the Hippo pathway leads to YAP nuclear translocation and acts as a transcriptional co-activator to regulate the activity of target protein transcription factors. The phosphorylation-dependent YAP shuttling is critically important intracellular mechanism in the Hippo pathway. Phosphorylated YAP is sequestrated outside the nucleus, however, in the absence of phosphorylation, YAP transfers to the nucleus to activate transcription and promote the proliferation and metastasis of cancer cells. Studies [12] have shown that LKB1 can regulate cell growth and proliferation via the phosphorylation of YAP.

Telomeres, special structures like caps at the chromosome tips in eukaryotic cells, can protect chromosomes tips from fusion, rearrangement, degeneration and translation [13]. With the proliferation of somatic cells, telomeres gradually shorten. When telomeres shrink to a certain extent, cells stop dividing and remain in a static state. Telomere length and stability determine cell life and are closely related to cell senescence and canceration. However, telomere shortening is a risk factor for many diseases [14]. Telomerase is a nucleoprotein complex with the function of synthesizing telomere sequences and balancing telomere consumption [15]. It includes human telomere RNA (hTERC), human telomere reverse transcriptase (hTERT) and human telomere binding protein (hTP1). Among them, hTERC is a DNA template for telomere elongation, and is one of the core components and necessary for the activity of telomere. It is very important for the structure and catalytic activity of telomere. Previous studies [16,7] have reported significantly higher percentages of cells with amplification of hTERC in pleural effusion of lung cancer, and the mRNAs of hTERT and hTERC were more likely to be expressed in the lung cancer group than in the benign group. Therefore, a comprehensive understanding of the regulation mechanism of telomerase activity in lung cancer cells can provide a new direction for the development of new targeted drugs for cancer and new ideas for clinical diagnosis and treatment.

Nguyen HB et al. reported that LKB1 can promote phosphorylation of YAP, and lead to YAP nuclear exclusion [12], and Yu P et al. indicated that YAP is one of the key factors to promote the expression of hTERT [17]. However, there is no research to explain the relationship between YAP and hTERC. We speculate that LKB1 can phosphorylate YAP to retain the phosphorylated YAP in the cytoplasm, thereby inhibiting the entry of YAP into the nucleus and exerting transcriptional co-activation, and then the expression and amplification of hTERC can be inhibited.

Three human non-small-cell lung carcinomas (NSCLC) cell lines NCI-H460, A549, and LK2 were used in this study. NCI-H460 and A549 cells were purchased from the cell bank of Chinese Academy of Sciences (Shanghai, China) and grown in Hyclone RPMI 1640 medium supplemented with 10% fetal bovine serum (FBS, Cellmax, Beijing, China). The LK2 cell line was a gift from Dr. Hiroshi Kijima (Department of Pathology and Bioscience, Hirosaki University Graduate School of Medicine, Japan) and cultured in Hyclone Dulbecco's modified Eagle's medium (DMEM) supplemented with 10% FBS (Cellmax). Cells were cultured in a humidified incubator at 37°C with 5% CO2.

The plasmids for pcDNA3-LKB1-His and pcDNA3-His were gifts from Professor Xin Hou (College of Life Sciences, Inner Mongolia University, Huhhot, Inner Mongolia, China). The cells were incubated in appropriate antibiotic-free medium with 10% FBS (Cellmax), transferred to 6-well plates culture and incubated at 37°C, CO2 incubator to obtain 70-90% confluens. Thereafter, the cells were performed in 6-well plates using Lipofectamine 3000 (Invitrogen, Carlsbad, CA, USA) as per instructions from the maufacturer. Tansfection with empty vector and mock transfection were used as controls. 24 hours after transfected by quantitative real-time reverse transcriptase-polymerase chain reaction (qRT-PCR), the mRNA analysis was assessed. 48 hours after transfected by western blotting, the protein analysis was assessed.

Small-interfering RNA(siRNA) was performed to silence the expression of specific genes. siRNAs against LKB1, and YAP1 were purchased from RIBOBIO (Guangzhou, China). Scrambled siRNA (RIBOBIO, Guangzhou, China) was used as a nonspecific siRNA control.

Total RNA was extracted from cells with Trizol solution (TaKaRa, Dalian, China) according to the manufacturer's instructions. A total of 1μg RNA was subjected to reverse transcription reaction to obtain cDNAs by using a Prime Script TM RT reagent Kit (TaKaRa, Dalian, China). qRT-PCR was carried out on 7900HT Fast Real-Time PCR System (Applied Biosystems) using SYBR® Premix Ex Taq II (TaKaRa, Dalian, China). Non-template controls were carried out every time for each primer pair to detect nonspecific amplification. Glyceraldehyde-3-phosphate dehydrogenase (GAPDH) was amplified as the internal control. All reactions were run in triplicate. The fold change of mRNA expression was calculated using the 2-ΔΔct method. The detailed information of the primers is given in Table 1.

Sequences and features of primers used for qRT-PCR

Cells of each group were seeded onto glass slides and keep it for 24 hours in 24-well plates. The cells were washed with PBS and fixed with 4% formaldehyde (Solarbio, Beijing, China) for about 20 minutes after the medium was removed. Then the cells were permeabilized with 0.1% Triton X‐100 (Solarbio, Beijing, China) for 15 min and blocked with 3% bovine serum albumin for 1 h at 37°C. Subsequently, YAP1 (1:50; Proteintech, Wuhan, China) antibody (1:50) was added and incubated overnight at 4 °C. The slides were incubated with the secondary antibody (1:50; Proteintech, Wuhan, China) for 1.5 h at 37°C and with DAPI (Beyotime Biotechnology, China) for 15min. Images were obtained using a fluorescent microscopy (BX-51, Olympus Corporation, Tokyo, Japan).

FISH was performed according to the manufacturer's protocols (F01007-00, China Medical Technologies, China). The Red-labeled GLP TERC probe which we need to calculate and Green-labeled control probe CSP 3 probe were obtained from 100 independent nuclei. When the TERC signal value was more than 2, and the CSP 3 signal value equaled to 2, the amplified cells are half-segment.

SPSS 22.0 software was utilized for statistical analyses in this study. Each assay was performed at least 3 times. The data were expressed as mean ± SD and the significance of differences in multiple comparisons was determined by Student's t-test. p<0.05 was considered to be statistically significant.

LKB1 inhibits YAP nuclear localization by the phosphorylation of YAP 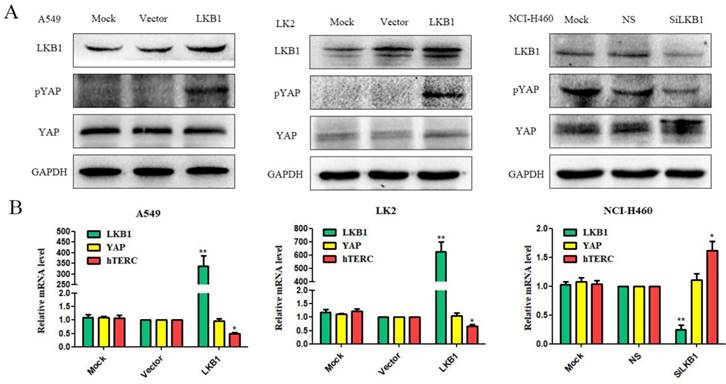 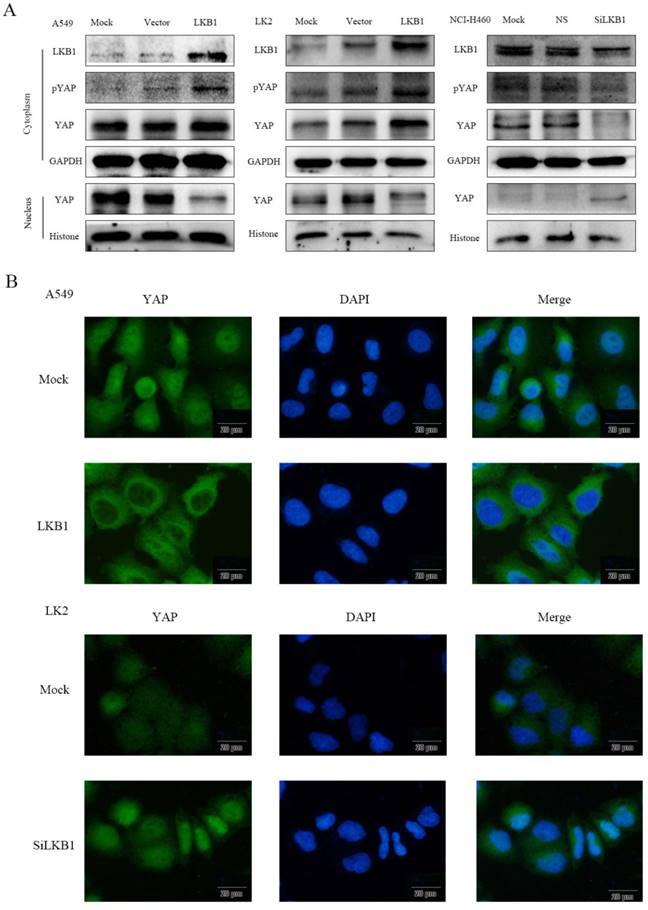 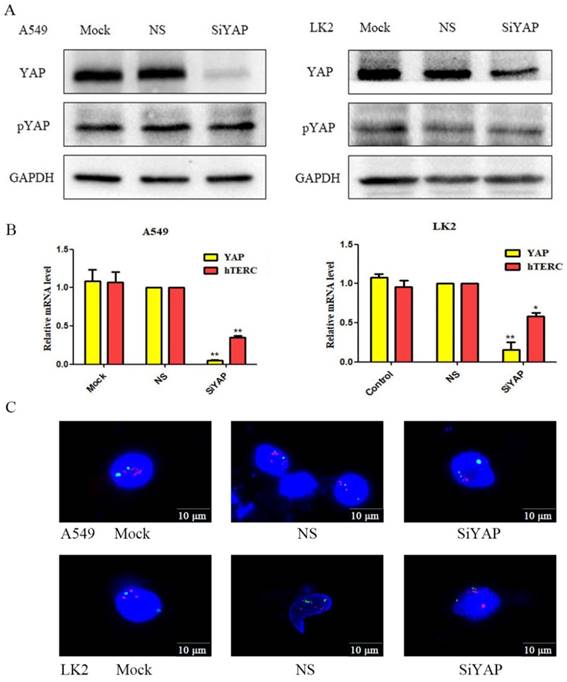 In this study, western blotting and qRT-PCR were used to detect the expression of LKB1, YAP, pYAP and hTERC in lung cancer cells to reveal the relationship between gene regulation, and immunofluorescence was used to analyze the factors affecting the localization of YAP. In our previous work, we found that the expression of LKB1 and hTERT was negatively correlated in bronchial brush cells of lung cancer and benign lesions. However, the regulatory relationship between LKB1 and hTERC has not been reported. This study found that LKB1 could inhibit the expression of hTERC by phosphorylating YAP, which is the continuation and deepening of previous research [16]. LKB1, a critical tumor suppressor gene, can repress YAP activity. YAP is a key effector molecule downstream of Hippo signaling pathway [8]. It regulates signal transduction inside and outside the nucleus through phosphorylation, and acts as a transcription co-activator to regulate the activity of transcription factors [8,9,10].

In conclusion, our results suggest that LKB1 inhibits the expression and amplification of hTERC through the axis of LKB1-pYAP(YAP)-hTERC. LKB1 may be a key regulator driving YAP's nuclear and cytoplasmic shuttle in cells. What other regulators exist between them needs to be further studied in the future. YAP promotes the expression and atypical amplification of hTERC , but whether YAP promotes hTERC expression directly or indirectly, and whether there are other regulatory factors between YAP and hTERC remains to be further studied.

This work was supported by grants from the National Natural Science Foundation of China to Guang-Ping Wu, Grant No.81171650 and 81672082.