Methods: A cohort of 78 stage III-IV nasopharyngeal carcinoma patients was divided into early (n=46) and late (n=32) nutrition intervention groups. The early group of patients received nutritional support at the beginning of CRT, whereas the late group received such a support until development of the side effects, like 50% required oral dietary intake or >10% weight loss. The data were collected and statistically analyzed.

Results: There was no significant difference in baseline clinical characteristics between these two groups, suggesting that no selection bias occurred. Both groups of patients had weight loss at the end of CRT and 3 months thereafter. However, at the later time point, the early group started to regain their weight, while the late group continued to lose weight. At both time points, the early group had a lower percentage of weight loss than the late group. Similar results were also obtained for BMI, albumin, and pre-albumin levels (All p<0.05). Besides, the early group showed a lower rate of advanced mucositis, a lower percentage of patients with more than 3 days RT breaks, fewer days of RT delayed for toxicity, and a lower percentage of patients with unplanned hospitalizations (All p<0.05). A linear correlation was also found between the percentage of weight loss and the number of days of RT delayed.

Nasopharyngeal carcinoma (NPC), the most common cancer originating in the nasopharynx area, is a squamous cell carcinoma or non-keratinizing, undifferentiated type of carcinoma [1, 2]. It is a significant health problem in the world, especially in the Southern China and Southeast Asia [3, 4]. The NPC staging system was developed by the American Joint Committee on Cancer (AJCC) and the International Union Against Cancer (UICC) based on tumor stage, lymph node involvement, and distant metastasis [5, 6]. For the advanced NPC (Stage III/IV), the U.S. National Comprehensive Cancer Network (NCCN) Guidelines recommend CRT adjuvantly and neoadjuvantly as the standard treatment [7, 8]. Recently, the therapeutic advancement, e.g., the intensity-modulated radiotherapy (IMRT), significantly improved survival of patients [9-11]. With CRT treatment, approximately 80% of NPC patents can survive for at least 5 years [12-14].

Malnutrition is an important clinical factor in cancer progression and treatment. It results from a state when food intake fails to provide the energy requirements [15]. Malnutrition is very common in NPC patients because the original tumor site could significantly reduce food intake [16, 17]. Also, the majority of NPC patients have unhealthy habits that worsen the malnutrition, like tobacco smoking and alcohol consumption [18]. Furthermore, CRT frequently exacerbates malnutrition because of its adverse effects, such as alteration of taste, advanced mucositis, fatigue, nausea, vomiting, and so on [19, 20]. Among the CRT side effects, advanced mucositis (Stage III/IV) is the most common cause of severe malnutrition and sometimes, the worsened malnutrition may even disrupt CRT durations [21, 22]. Therefore, in order not to compromise CRT treatment efficacy, nutrition intervention should be applied to maintain the nutritional status of NPC patients with CRT.

This study included 78 NPC patients who received medical treatments between March 2015 and March 2018 in The First Hospital of Jilin University (Jilin, China). The inclusion criteria were 1). Patients were histopathologically diagnosed with III/IV NPC; 2). Patients were aged between 18 and 70 years old; 3). Patients had no significant liver and kidney diseases, heart and lung dysfunctions, or serious endocrine and metabolic diseases to receive initial chemoradiotherapy; and 4). Patients had a Karnofsky Performance Status (KPS) score of 70 or above. This study was approved by the Ethics Committee of The First Hospital of Jilin University and waived for individual informed consent.

All patients were treated with IMRT delivered as five fractions per week. All patients were immobilized in the supine position with a head, neck, and shoulder thermoplastic mask. All patients were scanned with serial 3-mm slices from the vertex through the clavicles. The PTV was constructed automatically based on each volume with an additional 3-mm margin in three dimensions to account for set-up variability. The prescribed radiation dose was 69-74 Gy to PGTVnx, 66-70 Gy to PGTVnd, 60-66 Gy to PTV1, and 50-54 Gy to PTV2, delivered in 30 or 33 fractions. Radiation was delivered once daily, five fractions per week, over 6-6.5weeks for IMRT planning. The dose to OAR was limited on the basis of the RTOG 0225 protocol.

These patients were divided into two groups, i.e., the early (n= 46) and late (n= 32) nutritional intervention groups. The early group of patients received nutritional support (see below for details) at the beginning of CRT (T0), while the late group didn't receive such a support until the side effects were developed, like 50% required oral dietary intake or >10% weight loss. Both groups of patients continuously received such a nutritional support until 3 months after CRT.

The nutritional intervention was initially administered by oral nutrition (a commercial product) and if oral intake was not sufficient to maintain patients' nutritional status, short-term parental nutrition was applied. When patients formed severe oral mucositis causing dysphagia, enteral tube feeding (NGT or PEG) may be utilized.

Clinicopathological data were retrospectively collected from their medical records, like age, sex, weight, BMI, serum albumin and pre-albumin levels, history of tobacco smoking and alcohol consumption, incidence of III/IV mucositis and total radiotherapy dose. The nutritional status, including the body weight, BMI, and serum albumin and pre-albumin, was evaluated in both groups at the end of CRT (T1) and 3 months (T2) after chemoradiotherapy. To evaluate the treatment tolerance, we assessed the incidence of advanced mucositis, radiotherapy interruptions or delay, and unplanned hospitalization during the T1. For hospitalization criteria, patients will be admitted to hospital if the following conditions are presented: duration of III or IV mucositis is more than one week; duration of stage II fatigue is more than one week; weight loss is more than 10%; stage III bone marrow suppression is developed with a fever.

The data were statistically analyzed by using SPSS software (version 22.0; IBM SPSS, Chicago, IL, USA). The distributions of patients' characteristics between the groups were assessed by using Student's t-test for continuous variables and chi-square test or Fisher's exact test for categorical variables. A P<0.05 was considered as statistically significant.

In this cohort of patients, there were 59 males and 19 females with a mean age of 51 years old. 68% smoked tobacco and 27% consumed excessive alcohol. Staging data showed 23 patients at stage T1-2, 55 at T3-4, 66 at N0-2, and 12 at N3. Laboratory data showed a mean of 68 kg body weight, 41.8 g/L of serum albumin level. All of these patients received CRT. As shown in Table 1, there was no difference in these clinicopathological factors between the early (n=46) and late (n=32) groups of patients (p > 0.05), indicating that there was no selection bias in these patients. However, there was a difference in the incidence of III/IV mucositis (p < 0.05). The lower ratio of advanced mucositis in the late group probably explained why this group of patients refused nutrition intervention at the beginning of CRT.

To assess the nutritional status of patients, we recorded changes in body weight, BMI, serum albumin, pre-albumin, and total lymphocyte count, total cholesterol levels in both groups at the end of CRT (T1) and 3 months thereafter (T2). Figure 1A showed that both groups had weight loss at T1, while the early group started to regain the body weight at T2, whereas the late group continued to lose the body weight at T2. Furthermore, the early group had a lower frequency of weight loss than the late group at both T1 and T2 (Figure 2A). Similar results were also shown for the BMI, serum albumin and pre-albumin levels (Figure 1 and 2B-D, p < 0.05). For total lymphocyte count and cholesterol level, the change pattern is similar but no significant difference was observed between the two groups (Supplemental figure).

As shown in Table 2, the early group had a lower rate of advanced mucositis, therapy discontinuation or delay, and unplanned hospitalization at the end of CRT. Moreover, there was a significant linear association of weight loss and the number of days of RT delay in both study populations (r= -0.42; p<0.01). These results demonstrated that the early nutrition intervention was able to increase CRT tolerance possibly through maintenance of nutritional status.

We then compare other adverse events of the CRT between these two groups of patients. However, unlike advanced mucositis, there was no significant difference found in hematology parameters, dermatitis, nausea, vomiting, xerostomia, nephrotoxicity or neurotoxicity (All p > 0.05).

Indeed, our current data are consistent with previous studies, further supporting importance of the nutrition intervention [19, 27, 29]. It has been frequently reported that patients would lose 10% or higher of body weight loss after CRT [30-32]. In the late group of patients in our current study, patients only lost 7.2% of their baseline weight, suggesting the nutrition intervention had the beneficial effect. More importantly, the early group had a significantly lower percentage of changes in body weight, BMI, serum albumin and pre-albumin, indicating that the early nutrition intervention was even more beneficial. Based on this finding, we speculated that an earlier nutrition support could even provide better CRT outcomes. 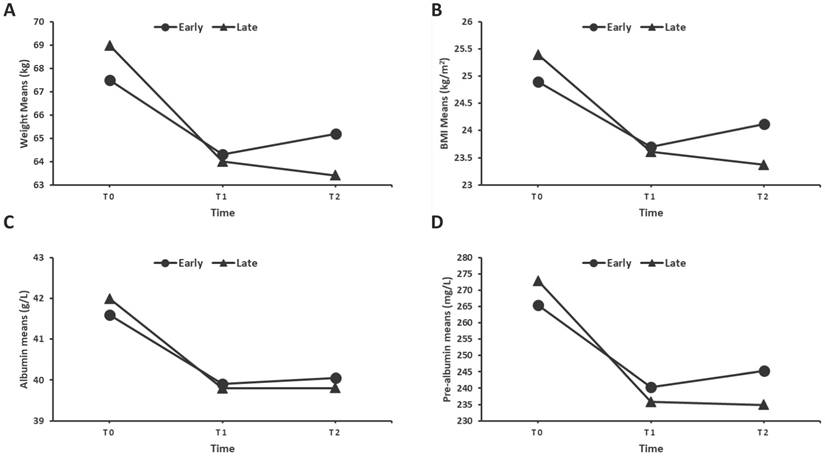 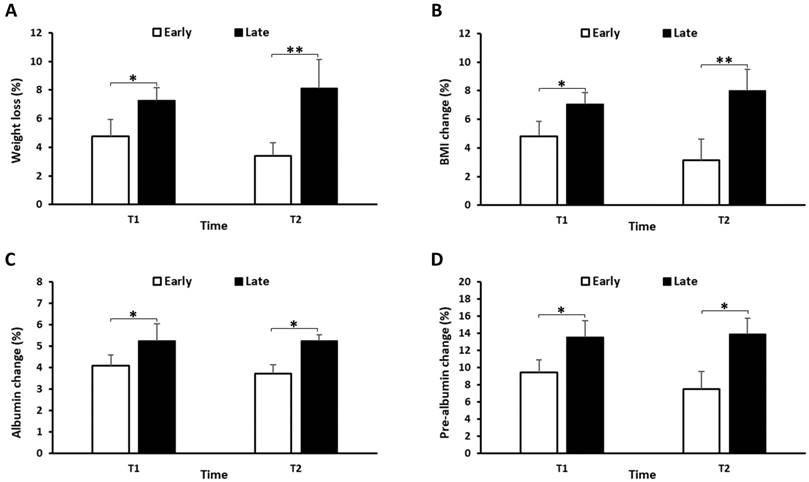 It is also worth mentioning that our current study did have a selection bias as well, i.e., the rate of advanced mucositis was significantly higher in the early group, possibly explaining why this group of patients accepted the early nutrition intervention. Nevertheless, the early group with initially higher rate of advanced mucositis, successfully reversed the result. At the end of CRT, the early group of patients showed a dramatically lower incidence of advanced mucositis compared to that of the late group (13.0% vs 21.9%, p<0.05), implying that the early nutrition intervention benefited patients' oral condition. Since severe mucositis is the most common CRT side effects and could result in CRT interruptions, we compared the rate of patients with RT interruptions, days of RT delayed, and rate of patients with unplanned hospitalizations at the end of CRT. Our results showed that the early group had a lower percentage of more than 3 days RT breaks, fewer days of RT delayed, and unplanned hospitalizations, suggesting that the early nutrition intervention increased CRT tolerance. We also found a significant linear correlation between percentage of weight loss and days of RT delayed, indicating that the early nutrition intervention increased CRT tolerance possibly through maintenance of the nutritional status. However, for other adverse effects than mucositis, we didn't observe any significant difference as shown in Table 3.

Adverse events at the end of CRT. ns: not significant.

Our study does have several limitations: it is a retrospective study and the sample size is relatively small. In the future, we will perform a prospective investigation of early nutritional intervention for different cancer patients during chemoradiotherapy to verify our current data.

The authors would like to thank Xuebo Yan of The UT M. D. Anderson Cancer Center (Houston, TX, USA) for technical assistance.

LM, YX, and XJ designed the project and wrote the paper. LM, JW, RJ, and BW performed experiments and generated data. XX reviewed and edited the manuscript. All authors approved the final manuscript.

15. Hammerlid E, Wirblad B, Sandin C, Mercke C, Edström S, Kaasa S. et al. Malnutrition and food intake in relation to quality of life in head and neck cancer patients. Head & Neck: Journal for the Sciences and Specialties of the Head and Neck. 1998;20:540-8

24. Gillison ML. Current topics in the epidemiology of oral cavity and oropharyngeal cancers. Head & Neck: Journal for the Sciences and Specialties of the Head and Neck. 2007;29:779-92