Increased aerobic glycolysis portends an unfavorable prognosis in thyroid cancer. The metabolic reprogramming likely results from altered mitochondrial activity and may promote cancer progression. Peroxisome proliferator-activated receptor γ coactivator 1α (PGC1α) plays a pivotal role in mitochondrial biogenesis and function. In the present study, we aimed to evaluate the clinicopathological significance of PGC1α expression and the potential effects of PGC1α modulation. Firstly, the expression of PGC1α in thyroid cancer samples was evaluated using western blot analysis and immunohistochemical staining. Compared with normal thyroid tissue, PGC1α expression was downregulated in thyroid cancer. PGC1α-negative papillary cancer was associated with BRAF V600E mutation, large tumor size, extrathyroidal or lymphovascular invasion, lymph node metastasis, and advanced stage. The results were consistent with the analysis of The Cancer Genome Atlas data. PGC1α expression correlated with oxygen consumption in thyroid cancer cells and was inversely related to AKT activity. The biologic relevance of PGC1α was further investigated by gain- and loss-of-function experimental studies. PGC1α overexpression led to augmented oxidative metabolism and accelerated tumor growth, whereas PGC1α knockdown induced a glycolytic phenotype but reduced tumor growth in vivo. In conclusion, PGC1α downregulation is associated with glycolytic metabolism and advanced disease in thyroid cancer. Nonetheless, manipulating PGC1α expression and metabolic phenotype does not necessarily translate into beneficial effects. It suggests that the metabolic phenotype is likely the consequence rather than the cause of disease progression in thyroid cancer.

The phenomenon of high rates of aerobic glycolysis in cancer cells was described as early as in the late 1920s by Otto Warburg. Subsequently, metabolic reprogramming has been found to be one of the core hallmarks of cancer, which might enable cancer cells to survive a hostile microenvironment and sustain rapid growth [1]. The high rate of glucose utilization by such tumors can be visualized clinically by 18fluorine-labeled-fluorodeoxyglucose positron emission tomography/computed tomography (FDG-PET/CT). In differentiated thyroid cancer, FDG uptake has important prognostic implications. Positive FDG-PET/CT scan was associated with a short thyroglobulin doubling time, and patients with FDG-avid lesions might have shorter survival [2, 3]. These observations suggest that a glycolytic state links to aggressive tumor biology of thyroid cancer.

Age is a major determining factor for overall survival in patients with thyroid cancer. We have shown that older age at diagnosis is associated with an upregulation of glycolysis signature in tumor tissue [4]. It is well recognized that mitochondrial alterations are involved in a diverse range of acquired disorders, including aging and neurodegenerative diseases [5]. There is compelling evidence that bioenergetic changes in mitochondria are actively participating in the metabolic reprogramming during tumorigenesis [6]. Among metabolic regulators, peroxisome proliferator-activated receptor γ coactivator 1α (PGC1α) is a transcription factor coactivator which plays a pivotal role in mitochondrial biogenesis and function [7]. Cellular PGC1α is regulated by stress sensors such as AMP-activated protein kinase (AMPK). Experimental studies suggest that PGC1α is also important in the metabolic reprogramming of cancer cells and is aberrantly regulated by several oncogenes and signaling pathways [8].

The study (14MMHIS091e) was approved by the Institutional Review Board of MacKay Memorial Hospital. Consecutive patients who underwent thyroidectomy for thyroid cancer between 2001 and 2012 were randomly selected for tissue analysis. The details of the selection process have been described in our previous study, and the scanned pathologic images were publicly available for automatic quantitative evaluation [10, 11]. The criteria of specific pathologic features were described elsewhere [12, 13]. In the present study, a total of 121 patients with papillary thyroid cancer were included for the PGC1α expression analysis in tumor samples and adjacent normal thyroid tissues. The tumor-node-metastasis (TNM) staging was based on the seventh edition of the American Joint Committee on Cancer staging classification.

The expression level of PGC1α was investigated in paraffin sections using immunohistochemistry with a polyclonal antibody to PGC1α (ab54481; Abcam, Cambridge, UK). Immunohistochemical staining was performed using standard techniques as previously described [14]. We observed that the expression of PGC1α in thyroid follicular cells exhibited characteristic nuclear staining and homogeneous cytoplasmic staining (Figure 1A). Accordingly, the presence of any areas with ≥50% follicular cells showing definitive nuclear staining were considered PGC1α-positive.

The transcriptome sequencing data of primary tumor samples of TCGA papillary thyroid cancer (THCA) dataset were downloaded from the Genomic Data Commons of the National Cancer Institute as previously reported [15]. The PGC1α expression level was measured as log-transformed RNA-Seq by Expectation-Maximization (RSEM) values.

Cell viability and growth were determined by trypan blue exclusion. Cells were harvested, stained with 0.4% trypan blue solution (Sigma-Aldrich), and counted in hemocytometer chambers. For the colony-forming assay, 500 thyroid cancer cells were seeded into six-well plates. After 10-14 days, colonies were stained with 3% crystal violet and counted [16].

PGC1α is downregulation in thyroid cancer

We started with the immunohistochemical analysis of PGC1α expression in papillary thyroid cancer. As shown in Figure 1A, normal thyroid tissues exhibited strong nuclear immunoreactivity for PGC1α with little staining in the intervening stroma. The expression of PGC1α was diminished in some of the papillary thyroid cancers. Western blotting was performed using proteins isolated from additional paired samples, and the results were in agreement with the immunohistochemical data (Figure 1B). PGC1α expression was consistently low in malignant thyroid tissue except that a slight increase in PGC1α expression was observed in some follicular thyroid cancers. Phosphorylated AMPK and phosphorylated AKT levels were overexpressed in the malignant counterparts. 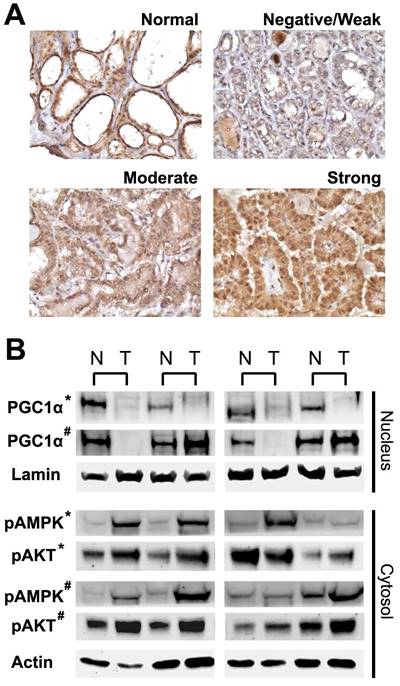 The translational relevance of PGC1α downregulation in thyroid cancer was investigated by examining the clinicopathological correlation. Based on our predefined criteria, about 56% of papillary cancer was interpreted as negative for PGC1α expression. We found that patients with PGC1α-negative papillary cancer had large tumor size, more frequent extrathyroidal or lymphovascular invasion, higher incidence of lymph node metastasis, and more advanced TNM stage (Table 1). Of note, the majority of PGC1α-negative cancer harbored the BRAF V600E mutation.

For external validation, TCGA data were evaluated for the association between PGC1α expression and clinicopathological factors. The level of PGC1α expression in papillary thyroid cancer was lower than that in the matched normal sample (n = 59; median RSEM, 269 versus 1828; Wilcoxon signed-rank P < 0.0001). PGC1α expression was progressively downregulated along with the increasing disease stage or the increasing recurrence risk defined by the American Thyroid Association (Figure 2). The expression of PGC1α tends to further downregulated in the distant metastatic sites than the primary tumor (n = 8; median RSEM, 142 versus 303; P = 0.069). Moreover, tumors harboring the TERT promoter mutation tend to have lower PGC1α expression (P = 0.069), but the marginal difference was lost after propensity score matching for the TNM stage and other clinicopathological parameters (P = 0.54) [21]. Overall, the analysis of TCGA data confirmed our observation that PGC1α expression was downregulated in parallel to disease progression of papillary thyroid cancer.

PGC1α correlates with oxidative metabolism and is upregulated by AKT inhibition

To gain an insight into the therapeutic potential of the restoration of PGC1α expression, K1 and 8505C cells which had low PGC1α expression levels were transfected with a PGC1α-expressing lentivirus vector. As expected, the expression of mitochondrial gene targets of PGC1α involved in oxidative phosphorylation (COX4i and cytochrome c) were upregulated (Figure 4A). Most glycolysis regulators, including glucose transporter (GLUT1), hexokinase 2 (HK2), and pyruvate kinase muscle isozyme 2 (PKM2), were downregulated. Nonetheless, the expression of lactate dehydrogenase (LDHA) was increased along with PGC1α overexpression. Consistent with the role of PGC1α in association with mitochondrial biogenesis, PGC1α-overexpressing thyroid cancer cells showed an increase in MitoTracker red fluorescence, an indicator of mitochondrial mass (Figure 5).

In accordance with the changes in mRNA expression of corresponding genes, PGC1α-overexpressing thyroid cancer cells had an increase in the OCR and ATP levels (Figure 4C and 4E). PGC1α-overexpressing K1 cells had lower glucose consumption (Figure 4D). Furthermore, lactate production was increased following PGC1α overexpression (Figure 4F), consistent with an upregulation of LDHA. Taken together, the restoration of PGC1α expression led to a relatively augmented oxidative metabolism and glycolysis in thyroid cancer cells.

Accompanied by alterations in metabolic phenotype after PGC1α overexpression, the cell growth and clonogenic ability of K1 cells were significantly increased (Figure 4B and 4G). There was no change in growth or colony formation in 8505C cells transfected with a PGC1α-expressing lentivirus vector. Our xenograft tumor model supports the in vitro results. Subcutaneous transplantation of PGC1α-overexpressing K1 cells in nude mice formed a significantly higher tumor burden compared to control cells (Figure 4H).

We further examined the effects of PGC1α knockdown in thyroid cancer cells with relatively high PGC1α expression levels. FTC-133 and ML-1 cells were transfected with PGC1α-targeting siRNA, and the expression of COX4i and cytochrome c was consistently reduced (Figure 6A). MitoTracker fluorescent staining supports a decrease in mitochondrial activity (Figure 7). Interestingly, the expression of all glycolytic genes (GLUT1, HK2, PKM2, and LDHA) was significantly upregulated. Markedly, the OCR and ATP levels were decreased following PGC1α knockdown (Figure 6C and 6E). By contrast, glucose consumption and lactate production were increased (Figure 6D and 6F), consistent with a shift to the glycolytic phenotype. 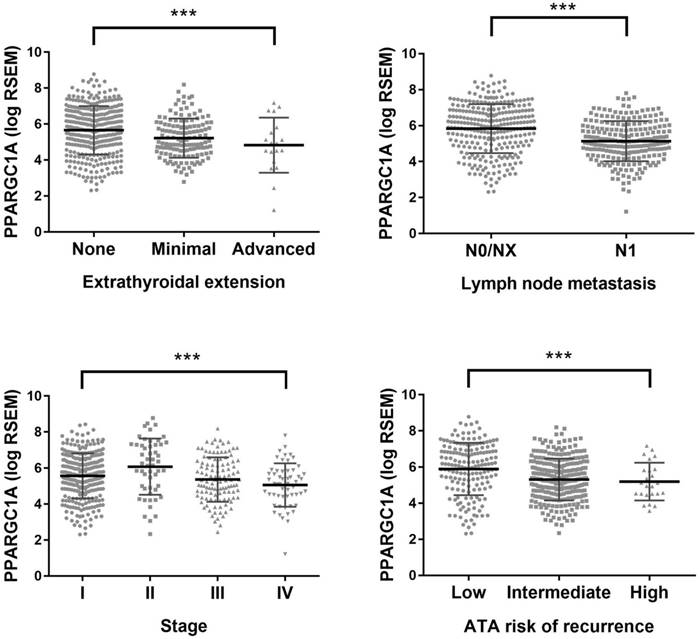 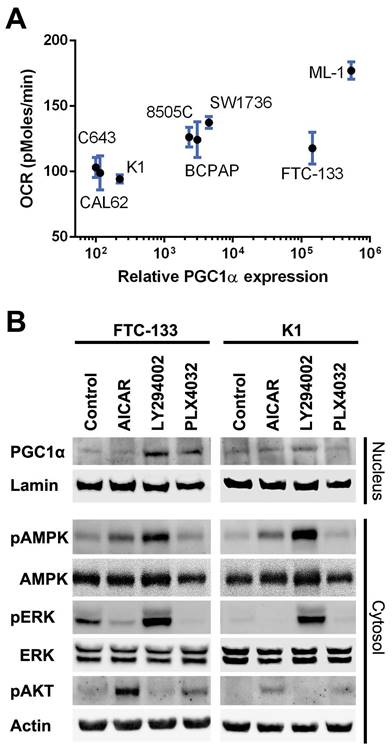 The change in metabolic phenotype after PGC1α knockdown did not enhance the aggressiveness of thyroid cancer cells. On the contrary, the cell growth and clonogenic ability of FTC-133 and ML-1 cells reduced (Figure 6B and 6G). In addition, the xenograft tumor growth in nude mice of FTC-133 cells transfected with PGC1α-targeting siRNA was significantly slower (Figure 6H). Taken together, although PGC1α silencing induced a glycolytic phenotype in thyroid cancer cells, it did not promote cell proliferation or tumor growth.

Energy supply in normal thyrocytes mostly relies on mitochondrial oxidative phosphorylation. In thyroid malignancies, oncogene activation and/or tumor suppressor inactivation leads to a variety of metabolic modifications including an accelerated glycolytic activity [22]. The metabolic ecology may, in turn, support tumor progression [1]. In this regard, BRAF V600E, the most prevalent somatic oncogenic mutation in papillary thyroid cancer, confers a higher likelihood of FDG-PET avidity and is associated with higher standardized uptake values (SUVs) [23]. This is in line with the findings of the present study. We showed that the PGC1α expression was downregulated in advanced disease and was closely related to the occurrence of BRAF V600E mutation. The downregulation of PGC1α in thyroid cancer likely reflects compromised mitochondrial integrity, reduced respiration, and compensatory enhancement in glycolysis during tumor progression. It is consistent with the observed relationship between the FDG-PET avidity and patient outcomes [3]. 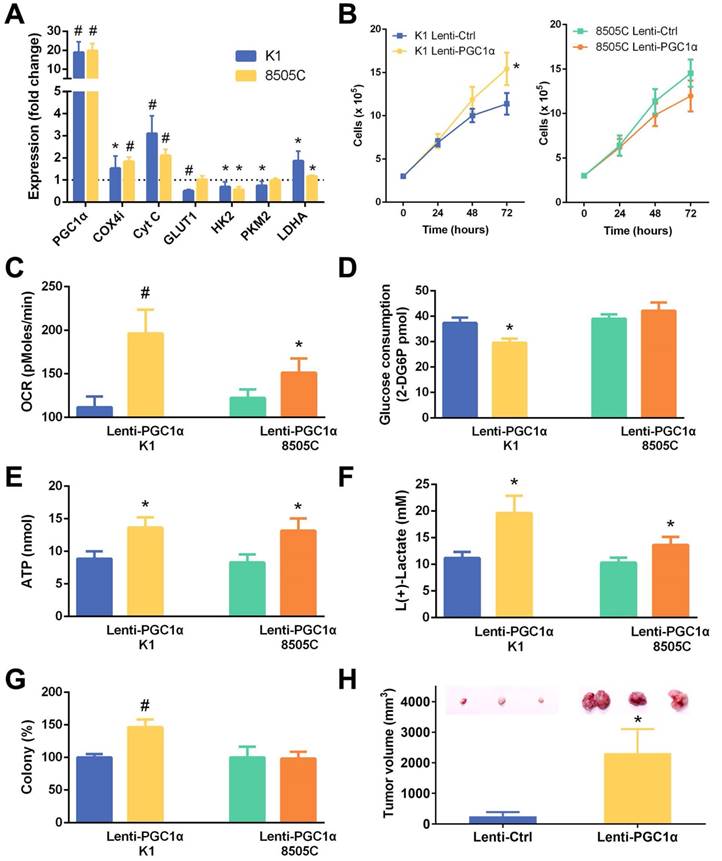 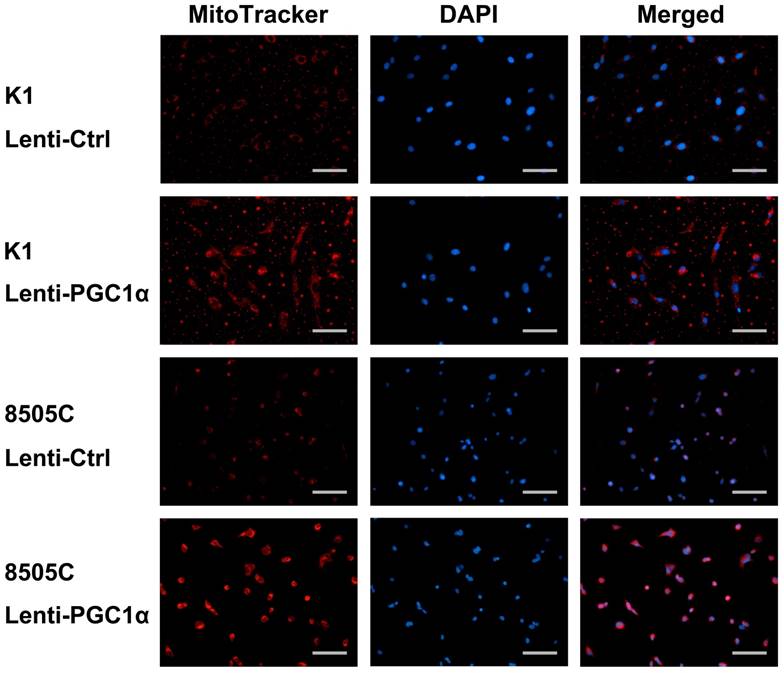 Considering the clinical implications of the glycolytic shift in thyroid cancer, it would be interesting to evaluate the therapeutic potential of manipulating PGC1α expression levels with accompanying changes in metabolic phenotypes. As expected, cells transfected with a PGC1α-expressing vector had increased oxidative metabolism and aerobic glycolysis through the induction of metabolic genes. Strikingly, cell growth and tumor formation of the PGC1α-overexpressing cells in immunocompromised mice were also enhanced. On the other hand, although glycolysis was upregulated following siRNA-mediated silencing of PGC1α, mice injected with PGC1α-knockdown FTC-133 cells showed a significant delay in tumor growth. A reasonable interpretation of our findings is that the metabolic characteristics might be cell-context dependent intrinsic properties acquired during disease progression. In this sense, simply modifying the balance between glycolysis and oxidative metabolism would not translate into beneficial effects.

In conclusion, the expression of PGC1α in thyroid cancer samples is negatively regulated by AKT activity, and the PGC1α expression is reduced at a later stage of the disease or in BRAF-mutant tumors. We observed a positive correlation between the PGC1α expression and oxygen consumption in thyroid cancer cells. PGC1α overexpression augmented oxidative metabolism as well as glycolysis and promoted colony formation and xenograft tumor growth. Silencing PGC1α induced a glycolytic phenotype and delayed the tumor growth. These findings suggest the metabolic phenotype is likely the consequence rather than the cause of disease progression in thyroid cancer. 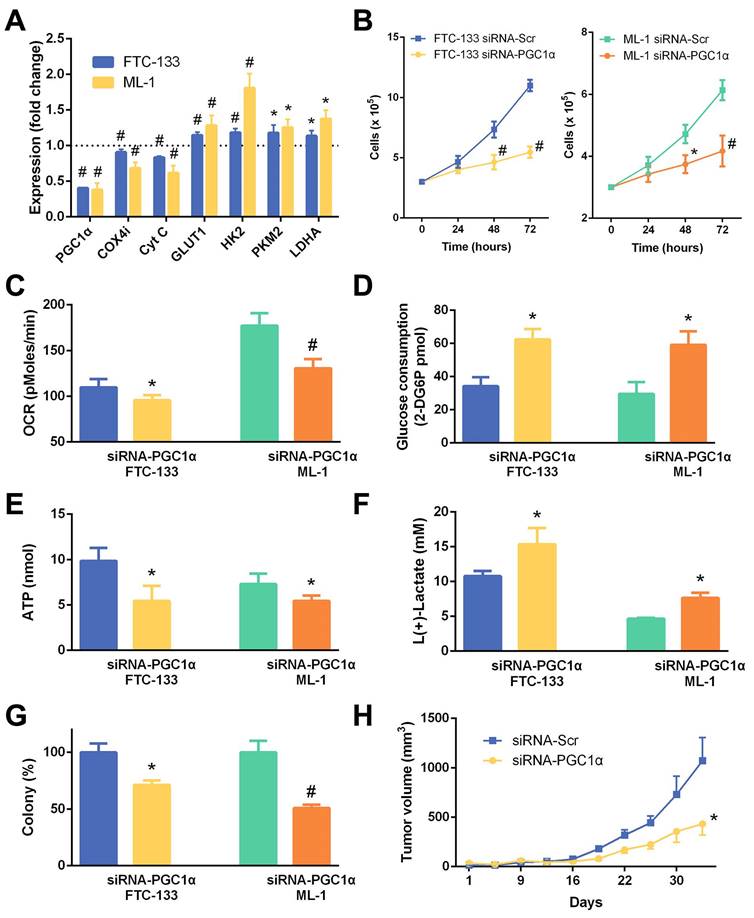 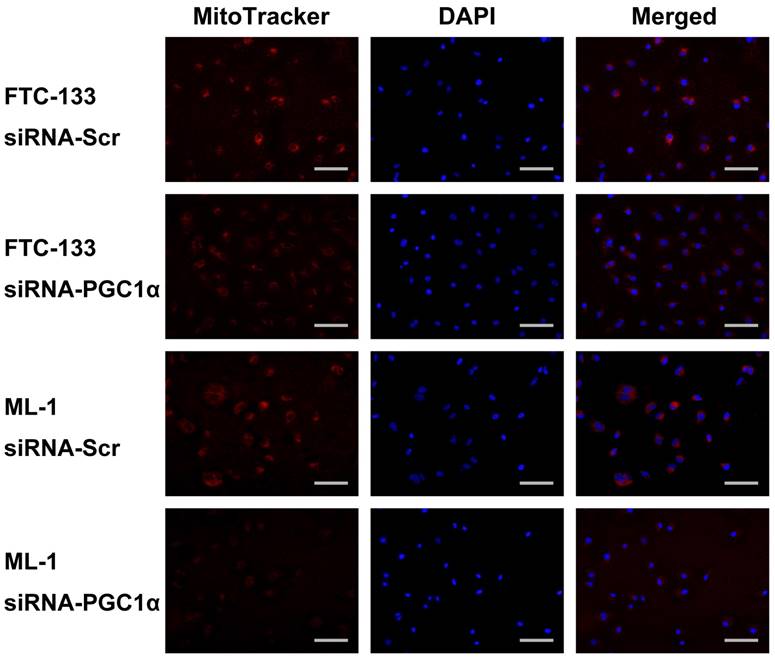 7. Villena JA. New insights into PGC-1 coactivators: redefining their role in the regulation of mitochondrial function and beyond. FEBS J. 2015;282:647-72