The recombination mediated by recombination activating gene (RAG) is not only the dominant mutational process but also the predominant driver of oncogenic genomic rearrangement in acute lymphoblastic leukemia (ALL). It is further responsible for leukemic clonal evolution. In this study, significant RAG1 increase is observed in the subsets of B-ALL patients, and high expression of RAG1 is observed to be correlated with high proliferation markers. IKZF1-encoded protein, IKAROS, directly binds to the RAG1 promoter and regulates RAG1 expression in leukemic cells. CK2 inhibitor by increasing IKAROS activity significantly suppresses RAG1 expression in ALL in an IKAROS-dependent manner. Patients with IKZF1 deletion have significantly higher expression of RAG1 compared to that without IKZF1 deletion. CK2 inhibitor treatment also results in an increase in IKZF1 binding to the RAG1 promoter and suppression of RAG1 expression in primary ALL cells. Taken together, these results demonstrate that RAG1 high expression is associated with high proliferation markers in B-ALL. Our data for the first time proved that RAG1 expression is directly suppressed by IKAROS. Our results also reveal drive oncogenesis of B-ALL is driven by high expression of RAG1 with IKAROS dysfunction together, which have significance in an integrated prognostic model for adult ALL.

The recombination-activating gene 1 (RAG1) is the member of a recombination-activating gene family which play an important role in the rearrangement and recombination of the genes of immunoglobulin and T cell receptor molecules and is critical for the generation of T and B cells. However, the abnormalities in RAG family members are observed quite commonly in lymphoid malignancies [1-7]. The RAG-mediated gene deletions and translocations have been reported in acute lymphoblastic leukemia (ALL) [8-13]. RAG and activation-induced cytidine deaminase (AID) together drive leukemic clonal evolution due to chronic exposure to inflammatory stimuli, parallel to infections noted in children during their childhood [13]. It is also reported that a higher RAG1 mRNA level predicts shorter relapse free survival and overall survival in patients with ALL [13]. These reports suggest RAG1 is involved in the oncogenesis and relapse of ALL.

IKAROS, a kruppel-like zinc finger protein is encoded by the IKZF1 gene, and it plays an essential role for normal hematopoiesis and acts as a tumor suppressor in ALL. The genetic defects of IKZF1 in a single allele are associated with the development of human acute lymphoblastic leukemia, which is characterized by an increased risk of relapses and poorer prognosis. Recently, we reported the global binding profiling of IKAROS in ALL cells and found that IKAROS regulates the expression of gene targets through chromatin remodeling in ALL [14-20]. Our data from chromatin immunoprecipitation followed by sequencing (ChIP-seq) showed IKAROS binding peaks in the promoter region of the genes in multioncogenic pathways. We also observed that CK2 inhibitors increased the tumor suppressor activity of IKAROS and act as a functional activator of IKAROS [14-20]. However, it still remains unclear whether IKAROS regulates RAG1 expression.

Cytogenetics and detection of most common IKZF1 deletion, Ik6 [27], CRLF2 rearrangements [28-30], BCR-ABL fusion gene/Ph chromosome [25, 31], PAX5 mutations [26] and SH2B3 mutations [17] etc. were performed as previously described. The StepOne Plus Real-time PCR system (Applied Biosystem-Thermofisher, Foster, CA, USA) was used for qPCR. Expression values of genes of interest (GOI) were calculated in each sample by a formula derived from a scatter graph of Ct values from serial dilutions of a template standard as described [16, 18, 20, 25]. Expression levels of GOIs were expressed as gene expression value of GOI/18s rRNA by normalized to the housekeeping genes. Subjects were allocated into high or low RAG1expression cohorts (3rd-4th quartiles vs. 1st-2nd quartiles) with a cut-off value determined by SPSS 20[16, 20].

The qPCR for RAG1 expression was similarly performed as above in Nalm6 cells. The results were n presented as fold induction over vector controls after normalized to those obtained with 18sRNA. Primers: 18s RNA, Sense: 5'-GTAACCCGTTGAACCCCATT-3', Antisense: 5'-CCATCCAATCGGTAGTAGCG-3'; RAG1 Sense: 5'-CGAGGAACGTGACCATGGA-3', Anti-sense: 5'-GGCAGTGTTGCAGATGTCACA -3'.

For the qChIP assays, the chromatin was incubated with antibodies against IKAROS [14, 15, 19] or normal rabbit IgG (Abcam) as a control [14, 15, 19, 20]. The enrichment of the ChIP sample was evaluated over input with the qPCR data obtained in three or more replicates, using specific primers in the promoter region of RAG1 (forward: 5'-GCAACCAACCAACTCTGTTCAC-3', reverse: 5'-ACTGGTTTGTTTTGGACTTTCCTT-3'). The relative concentration of the qPCR product was presented as the fold change of the level of DNA-IKAROS samples in comparison to controls.

The promoter of RAG1 was cloned into the pGL4.15 vector (Promega, WI, USA), and transiently expressed in HEK293 cells for luciferase reporter assay. The promega luciferase assay reagents were used to measure the result on the luminometer following the manufacture's instruction [14, 16]. The firefly luciferase activities were expressed as a percentage of pcDNA3.1-IKZF1 transfection-induced luciferase activity versus that of the pcDNA3.1 vector. All transfection for reporter assays were performed independently, in triplicate, at least three times.

The Mann-Whitney U-test was used for evaluation of median differences between the cohorts. Univariate and multivariate Cox models were performed for frequency differences with SPSS version 20.0. Mean values with bars representing the standard error of the mean (SEM) was used for data presentation. The shown data was the representative of 3 independent experiments. Statistical significance was determined by Student t-test for comparison of two groups or analysis of variance (ANOVA) for comparing more than two groups.

Firstly, we detected the RAG1 mRNA expression in 131 newly diagnosed adult B-ALL patients. We found that the RAG1 mRNA levels were significantly higher in patients with B- ALL compared to that in the normal controls (Fig 1). We also examined the RAG1 expression in microarray cohorts and found that RAG1 is highly expressed in the cohort studies of B-ALL patients (Supplemental Fig 1). 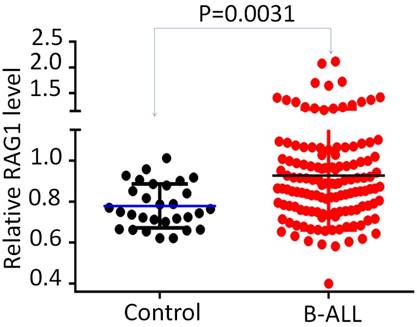 To further address the potential link between the high RAG1 expression and high proliferation of B-ALL cells, we analyzed the motifs of transcription factors in the promoter region of RAG1. As we expected, certain core IKAROS binding motifs (GGGA or GGAA) were identified in the promoter region of RAG1 (Fig 3A). Notably, our chromatin immunoprecipitation followed by sequencing (ChIP-seq) data showed the strong binding peaks for IKZF1 in the RAG1 promoter region in B-ALL cell lines and primary cells from the B-ALL patients (Fig 3B and Supplemental Fig 2)[14, 15]. To further confirm, quantitative ChIP (qChIP) assays were performed and showed significant binding of IKAROS at the RAG1 promoter region in both B-ALL cell line Nalm6 (Fig 3C) and primary cells (Fig 3D). 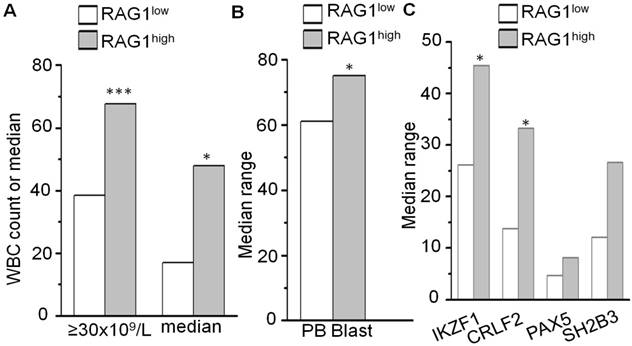 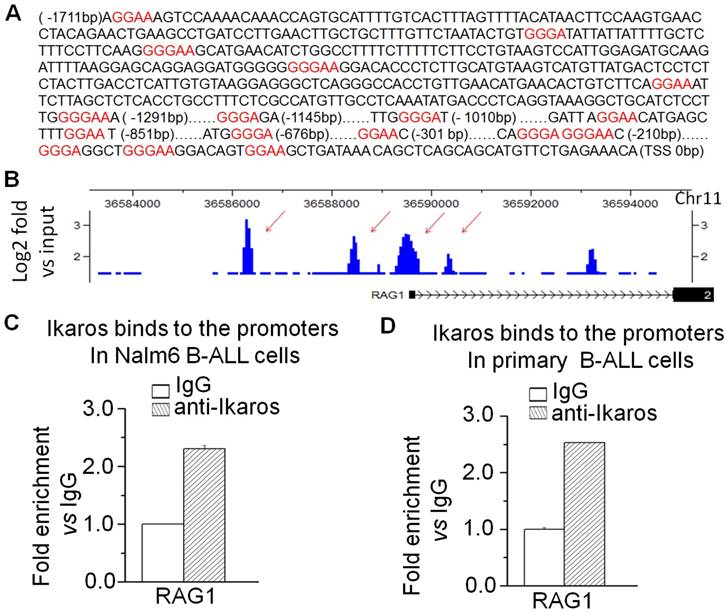 IKAROS suppresses RAG1 expression. (A) The promoter activity of RAG1 promoters measured by luciferase reporter assay following transfection with IKAROS or control vector in HEK293 cells. (B) Effect of expression of IKAROS in Nalm6 cells. The cells were transduced with a vector containing IKAROS as compared to the control vector. (C) qPCR of RAG1 and IKZF1 expression in the Nalm6 cells following IKZF1 shRNA treatment as compared to scramble shRNA cells. Gene expression is evaluated by RT-qPCR using total RNA isolated from the cells transfected with scramble shRNA (siControl) or IKZF1shRNA (siIKZF1) for 2 days. 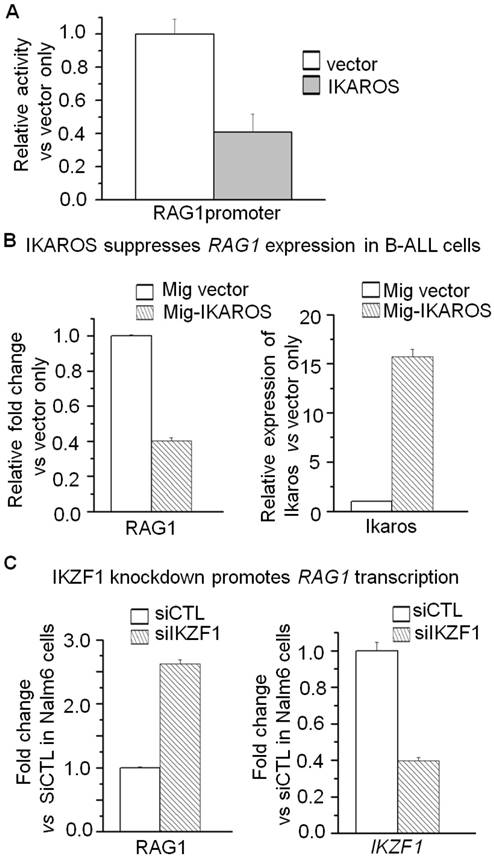 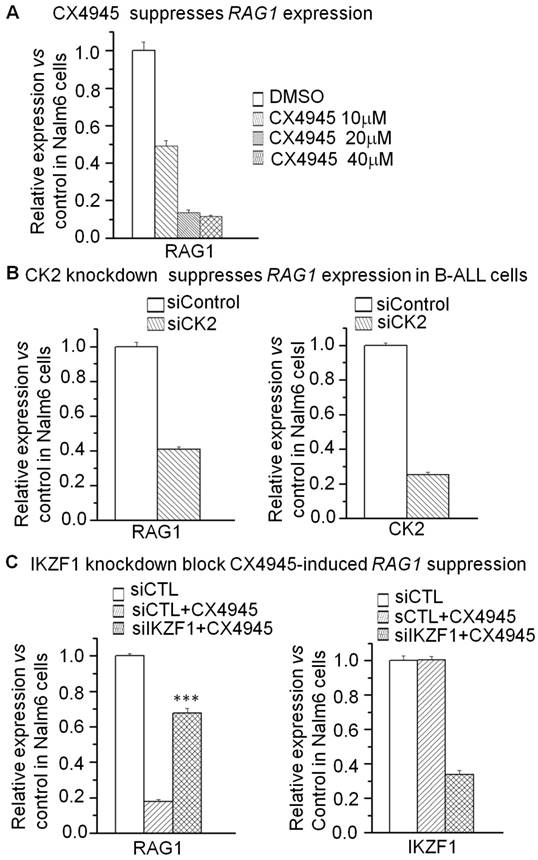 We have shown that CK2 inhibitor (CX4945) suppressed RAG1 expression in Nalm6 cells. To further demonstrate the potential clinical significance, we treated the primary cells from the patients with B-ALL. CX4945 could increase the binding of IKAROS on the RAG1 promoter region in primary B-ALL as compared to untreated controls (Fig 6B). In addition, CX4945 treatment inhibited expression of RAG1 mRNA in a dose-dependent manner in primary B-ALL cells (Fig 6C). These results indicate that IKZF1 binds to the promoter of RAG1 and that treatment with CK2 inhibitors, which can restore IKZF1 tumor suppressor activity, results in suppression of RAG1 expression in primary cells from B-ALL patients.

Correlation of RAG1 high expression with IKZF1 deletion in primary ALL cells. (A)Comparison of RAG1 expression in patients with or without IKZF1 deletion presented as RAG1/18s rRNA. The detection method for Ik6 (the most common IKAROS deletion) was done as our previously reported [23]. (B) CK2 inhibitor-CX4945 increased the IKZF1 binding to the promoters of RAG1 in primary B-ALL cells. (C) Effect of CK2 inhibitor-CX4945 functioning as IKZF1 activator on the expression of RAG1 in primary B-ALL cells with CX4945 treatment for 2 days. 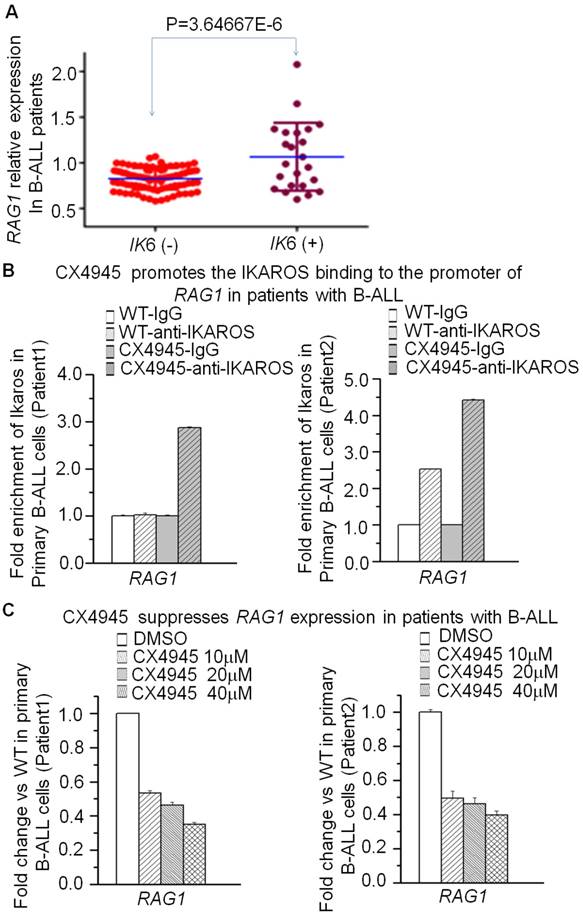 We observed that RAG1 is significantly higher in patients with B-ALL. Higher expression of RAG1 is associated with proliferation markers in B-ALL. IKAROS is crucial for the development of the hematopoietic system and its genetic deletion/mutations have been linked to the development of lymphoid leukemia. In particular, IKAROS functions as a major tumor suppressor involved in human B-cell acute lymphoblastic leukemia. In addition to a genetic defect, we also found that CK2 mediated-phosphorylation of IKAROS is another key reason leading to IKAROS dysfunction in ALL. Here, we found IKAROS directly suppresses RAG1 expression in B-ALL cells; CK2 inhibitor-CX4945 could suppress RAG1 expression by restoring IKAROS function in B-ALL cells. IKZF1 deletion is significantly associated with RAG1 high expression in B-ALL patients. These data reveal that RAG1 high expression together with IKAROS dysfunction may be responsible for the oncogenesis in B-ALL.

It is also reported that RAG-mediated recombination is the predominant driver of oncogenic rearrangement ETV6-RUNX1 in ALL [12] and plays critical roles underlying clonal expansion in pediatric ALL [12, 13]. Particularly RAG complex drives leukemic clonal evolution with repeated exposure to inflammatory stimuli, paralleling chronic infections in childhood under the same conditions [13]. We did observe the RAG1 high expression is associated with a high frequency of CRLF2 mutations in addition to IKZF1 deletion (Supplemental Table 1, Fig 2C). It is reported that both IKZF1 deletion and CRLF2 rearrangement are the drivers of high-risk ALL particularly the Ph-like ALL [17, 23-26]. Thus, these data suggested that high RAG1 expression may be also through oncogenic CRLF2 rearrangement to drive oncogenesis in B-ALL, although the association and underlying mechanisms of RAG activity with CRLF2 rearrangement need to be further determined.

In summary, we for the first time reported RAG1 is a direct target of tumor suppressor gene IKZF1. We found that IKZF1 deletion (characterized by IK6 expression) is significantly correlated with high RAG1 expression. RAG1 is highly expressed and significantly correlated with high proliferation markers in a cohort of adult B-ALL patients. Our data suggested RAG1 high expression work together with IKZF1 deletion may drive the oncogenesis in B-ALL.

The written informed consent from all the patients was obaitned in accordance with the Declaration of Helsinki before enrollment in the study. The Institutional Review Board of the Nanjing Medical University and Zhongda Hospital Southeast University, Nanjing, China approved this study.