External beam radiotherapy (EBRT) has been reported to be effective in palliating painful bone metastases, but the optimal fractions and doses for treating bone metastases from hepatocelluar carcinoma (HCC) are not established. This study aimed to compare toxicity and efficacy for conventional fraction versus hypofraction schedules. From January 2009 through December 2014, 183 patients with HCC bone metastases were randomly assigned to conventional fraction EBRT (Group A) or hypofraction radiotherapy (Group B). Study outcomes were pain relief, response rate and duration, overall survival, and toxicity incidence. Median follow-up time was 9.3 months. Response times were 6.7 ± 3.3 fractions in Group A and 4.1 ± 1.2 fractions in Group B (p <0.001). Pain relief rates were 96.7% and 91.2% in Group A and B, respectively (p=0.116). Time to treatment failure for Group A was significantly longer than Group B (p=0.025). Median overall survival was similar between two groups (p=0.628). Toxicity incidence in both groups was minimal, with no significant differences observed.

An estimated 782,500 new primary liver cancer cases and 745,500 deaths occurred worldwide in 2012, with China alone accounting for about 50% of the total number of cases and deaths.[1] Worldwide, 70-90% of primary liver cancers are hepatocellular carcinomas (HCC). The incidence of bone metastases (BMs) in patients with HCC has increased in recent years, with BMs reported in approximately 20% of patients with HCC [2,3], which may result from advances in primary tumor treatments [4].

HCC BMs are common causes of pain and other significant symptoms that diminish quality of life. Radiation therapy has been reported to provide significant pain relief from symptomatic BMs. In a previous study conducted by our group, 205 patients with HCC BMs received external beam radiotherapy (EBRT), with a complete response observed in 61 (29.8%) patients [5]. Yet the most effective fractionated dose schedule for patients with HCC BMs remains unclear. The Radiation Therapy Oncology Group (RTOG) has previously studied various treatment fractionation regimens for palliation of bone metastases [6,7], and shorter treatments were found to be as effective as longer treatments for achieving pain relief. However, most of patients in these trials were suffering from prostate or breast cancer, and patients treated with a single-dose regimen of 8 Gray (Gy) were reported to have high rates of retreatment. These findings have been confirmed by other studies and meta-analysis [8-10].

To the best of our knowledge, there are few reports available which focus on palliative radiotherapy (RT) for BMs in HCC. Therefore, it is of clinical significance to determine the optimal radiation dosimetry and fractionation regimens for patients in this category. In this prospective randomized controlled study, we compared clinical outcomes for patients with HCC BMs treated with conventional versus hypofractionated radiotherapy. The aims of this investigation were to compare toxicity and efficacy between the conventional fractionation and hypofractionated schedules.

This was a single-center randomized controlled trial comparing conventional fraction radiotherapy with hypofraction radiotherapy. Ethical approval for the study protocol was obtained from the research ethics committee of our hospital. This randomized clinical trial has been registered in a public database. Written informed consent was obtained from each patient prior to enrollment. Study participants were assigned using a computerized randomization table to receive either conventional fraction (Group A) or hypofraction (Group B) radiotherapy. The primary study endpoints were treatment efficacy, toxicity, and side effects. A secondary endpoint was the indication for different kinds of radiotherapy.

Subjects were eligible to participate if they were between 18-85 years old; had a clinical or pathologically confirmed diagnosis of HCC with no other coinciding malignancy; had evidence of bone metastases on CT, magnetic resonance imaging (MRI), or bone scan; and had no prior history of treatment with EBRT for bone metastases. Detailed eligibility and exclusion criteria are presented in Table 1. All subjects had to be able to provide written informed consent for participation and be able to complete pain assessments.

All patients underwent treatment simulation. Gross tumor volume (GTV) and plan target volume (PTV) were determined by CT, MRI, or PET-CT. Radiation fields were determined depending on each patient's metastatic condition. Helical intensity-modulated radiation therapy (IMRT) was adopted for patients with multiple metastases and for patients with metastases adjoining the spinal cord or other distant organs. For these patients, MV-class image-guided skills were used before treatment to account for set-up errors.

Sample size was calculated on the basis on the following assumptions: (1) One-sided alpha = 0.05; (2) Power = 80%; (3) Anticipated response rate = 92%; (4) Non-inferiority margin = 11%; (5) Lost to follow up = 10%; (6) Randomization: 1:1 (A: B). A total of 166 patients are required. Considering 10% of lost to follow-up, the number of patients needed to provide 80% power to reject the null hypothesis that the hypofraction arm is inferior to conventional fraction arm in favor of the alternative hypothesis that the hypofraction arm is non-inferior to the conventional fraction arm are 83 and 83 for hypofraction arm and conventional fraction arm, respectively. Data are presented as the mean ± standard deviation. Patient characteristics were examined using the χ2 test or Fisher exact test. The Kaplan-Meier method with log-rank test was used to compare survival and TTF curves. The Cox proportional hazards regression model was applied to perform univariate and multivariate analyses. All statistical analyses were performed using the Statistical Package for Social Sciences version 19.0 (SPSS Inc, Chicago, IL). A two-sided p-value of less than 0.05 was considered statistically significant in all tests.

183 patients were enrolled in the study between January 2009 and December 2014. The pre-treatment characteristics of all patients are summarized in Table 2. Patient and tumor characteristics were well balanced between the two treatment arms.

Table 3 shows the best response to RT for all patients by group. No statistically significant differences were found between the two treatment groups with regard to best response or overall response rate. The response time for Group B (4.1 ± 1.2 fractions) was significantly less than Group A (6.7 ± 3.3 fractions) (p <0.001).

Group Characteristics of the Study Patients

At the close-out date, six patients were lost to follow-up and 106 had had treatment failure (17 remained alive and 89 had died). The estimated median TTF (95% CI) for all randomized patients was 5.0 months (3.9-6.1 mo) and the estimated percentage without failure at 1 year was 23.3%. The Kaplan-Meier method with log-rank test suggested TTF for Group A was significantly longer than Group B (p=0.025, Fig. 1). 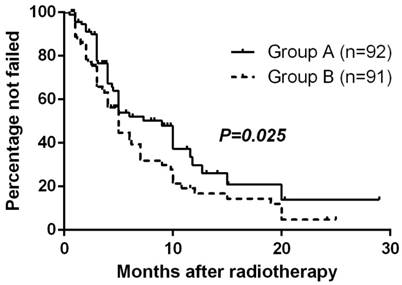 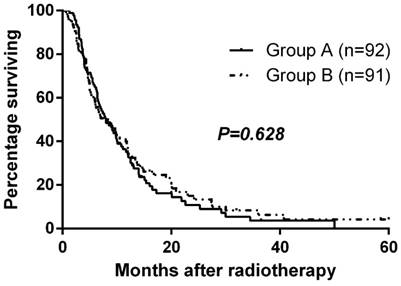 Radiotherapy is an effective, time-efficient, well-tolerated, and cost-effective intervention that is crucial for palliative oncology care [9], yet the optimal fractionated dose scheme for patients with HCC BMs remains unclear. Different radiation schedules in common use have been proposed, namely 30 Gy in 10 fractions [12], 20 Gy in five fractions [13], and a single fraction of 8 Gy [14].

In three large, clinical randomized trials, the Radiation Therapy Oncology Group (RTOG 9714) [15], the Dutch Bone Metastasis Study [16], and the Bone Pain Trial Working Party (BPTWG) [17] have compared single fraction treatment of 8 Gy with 30 Gy in 10 fractions (RTOG 9714), 24 Gy in six fractions, and 20 Gy in five fractions (BPTWG). In the overall response rates, no differences were found between the single-irradiation arm (approximately 64% response) and the protracted radiotherapy arms (67-78% response). While these studies were published a decade ago and include various histologic types, they nonetheless still provide useful reference values. In this study, we compared outcomes following treatment with conventional fractionation versus hypofractionation. Group A received fractions of 2 Gy, while Group B received fractions of 4 Gy. In agreement with previous reports, no statistically significant differences between the two treatment schedules for best response, overall response rates, toxicity incidence, or overall survival. Conventional radiotherapy may obtain a longer duration of pain relief. However, hypofractionated radiotherapy may achieve earlier pain relief compared to conventional radiotherapy. What is more, treatment-related cost was estimated to 240 yuan per fraction, so hypofractionated radiotherapy is quite a cheap one. Given the similar observed efficacy of the two treatment schedules, these results suggest that hypofractionation might be a smarter choice for some patients with shorter predicted survival time, given its advantages in convenience and treatment-related costs. And our results suggested KPS ≤ 80, TB >17.1 umol/L and uncontrolled intrahepatic tumor might be the potential criteria for recruiting patient with shorter survival.

Previous studies of radiotherapy outcomes in patients with BMs from HCC have reported that 73-99.5% of patients obtained overall pain improvement and 17-44% of patients achieved complete pain relief [17,21-23]. The overall response rate of 95.9% in our study was similar to these previous reports. HCC is often complicated by liver failure, and narcotic drugs may induce hepatic coma. Therefore, radiotherapy plays a particularly important role in relieving pain from HCC BMs, by minimizing the use of narcotic drugs for pain relief.

In our study, there were no cases of severe toxicity following treatment. No statistically significant differences were found between the two groups in the incidence of acute gastrointestinal tract reactions, fatigue, or hematologic toxicity. In a randomized controlled trial conducted by the Radiation Therapy Oncology Group (RTOG 9714), the authors reported a significantly lower rate of acute toxicity after treatment with 8 Gy in one fraction compared to 30 Gy in 10 fractions; although, there was no significant difference in late toxicity (e.g., pathologic fractures) [15].

The 1-year survival rate after radiotherapy initiation or the diagnosis of BMs from HCC has been reported to be 13.8-32.4%, with a 5- to 7.4-month median survival [5,22,24-26]. In patients with BMs, significant, unfavorable prognostic factors that have been reported include lower KPS [5,26], higher tumor marker levels [5], uncontrolled intrahepatic tumor [5], tumor stage [22], metastasis to other organs [22], and the presence of ascites [25]. Consistent with previous reports, our results indicated that KPS, intrahepatic tumor control were significant prognostic factors impacting overall survival. GGT (gamma-glutamyltransferase) is borderline significant in multivariate analyses. These prognostic factors may be considered when determining which doses and fractions are appropriate for each patient. Performance status is a significant independent predictor of survival reported for many types of cancer, including unresectable HCC [26]. GGT may induce DNA instability and subsequent oncogenesis, leading to the death of normal liver cells and loss of normal liver function [27].