Objective: Mitochondrial imbalance of division and fusion will lead to uncontrolled cell growth. This study investigated the effects of mitochondrial dynamics regulated by dynamin-related protein 1 (Drp1) on the invasion and metastasis of lung cancer cells at the cellular level.

Methods: Lentivirus-mediated RNAi and gene overexpression vectors containing shDrp1 and Lv-Drp1 were transfected into lung adenocarcinoma cell lines 95D and A549, respectively. An MTT assay was used to assess cell viability and a cell clone assay was used to evaluate the tumorigenic ability of lentivirus-infected cells. Cell invasion and wound healing assays were used to assess cell invasiveness and the migration rate after lentivirus infection. Annexin V-APC staining was used to determine the cell apoptosis rate.

Conclusion: Mitochondrial Drp1 is associated with the proliferation, invasion, and metastasis of lung adenocarcinoma cells. Inhibition of Drp1 expression may contribute to anti-tumor therapy for lung cancer.

Lung cancer is the most common malignant tumor and the leading cause of cancer-related deaths in the world [1]. About two-thirds of patients with lung cancer have lost the opportunity for surgery by the time of the initial diagnosis. Metastasis is the most important biological behavior of cancer and the main cause of death. The mechanism of metastasis involves the adhesion, migration, and movement of cancer cells and the degradation of the extracellular matrix [2]. The metastasis of cancer is quite complex, and many problems remain unclear.

In mammals, mitochondria are the only organelles with genetic material outside the nucleus. Early studies have shown that mitochondria are not only the energy factory of cells but also play a key role in the process of cell apoptosis [3,4]. Many studies, including our previous studies, have shown that mitochondrial DNA (mtDNA) variations (mutations, instability, and increased copy number) play an important role in tumorigenesis, progression, and differentiation [5-8].

Basic studies have shown that the expression of the Drp1 protein in A549 lung adenocarcinoma cells is higher than that in normal airway cells. Drp1 inhibitor mitochondrial division inhibitor (mdivi-1) can inhibit the proliferation of cancer cells [17]. The expression levels of total Drp1 and phosphorylated Drp1 (phosphorylation at Ser-616 enhances Drp1 activity) in lung adenocarcinoma tissue were significantly higher than those in adjacent normal lung tissue [17]. Nevertheless, it is unclear whether the mitochondrial morphological changes regulated by Drp1 are involved in the invasion and metastasis of tumor cells. The aim of this study was to investigate the effects of mitochondrial morphological changes regulated by mitochondrial Drp1 on the proliferation, invasion, and metastasis of tumor cells in vitro.

Cell viability was assessed using the MTT assay to verify the effects of the target gene on cell proliferation. Each group of cells in the logarithmic growth phase was trypsinized, and then resuspended in a complete medium to form a cell suspension, and seeded into a 96-well plate at 2.5 × 103 cells per well, then incubated with 20 μL of 5 mg/mL MTT for 4 h. The culture solution was completely aspirated and 100 μL of dimethyl sulfoxide (Shanghai Trial Chemical Reagent Co., Ltd.) was added. OD value at 490 nm was measured.

A cell cloning assay was used to evaluate the tumorigenic ability of lentivirus-infected cells. Cells were seeded in 6-well culture plates at 5.0 × 102 cells per well, and cultured for 14 days. There were three replicate wells in each group. After fixation by paraformaldehyde for 30-60 min, cells were stained with Giemsa dye solution for 10-20 min. Cells were washed several times with ddH2O and then dried, photographed, and counted to obtain the number of clones. A colony consisted of at least 50 cells.

Apoptosis was detected by an APC Annexin V Apoptosis Detection Kit according to the manufacturer's instructions. In brief, cells in the exponential growth phase were digested with trypsin, resuspended in complete medium, centrifuged at 1300 rpm and the supernatant was then discarded. The cell pellet was washed with 4 °C pre-cooled D-Hanks solution (Shanghai Genechem Co., Ltd.), and once with 1× binding buffer, then centrifuged at 1300 rpm for 3 min. The cell pellet was resuspended in 200 μL of 1× binding buffer, stained with 10 μL of Annexin V-APC, and protected from light for 10-15 min at room temperature.

The invasion assay was performed using Corning BioCoat Matrigel Invasion Chambers according to the manufacturer's instructions. In brief, invasion chambers were removed at -20 °C, placed on a 24-well plate on a sterile operating table and returned to room temperature. Serum-free medium (500 μL) was added to the upper and lower chambers then placed in a 37 °C incubator for 2 h to rehydrate the Matrigel matrix. A serum-free cell suspension containing 105 cells per well was prepared. Cells were stained with Giemsa solution, and invading cells were counted by photographing the membrane under a microscope. 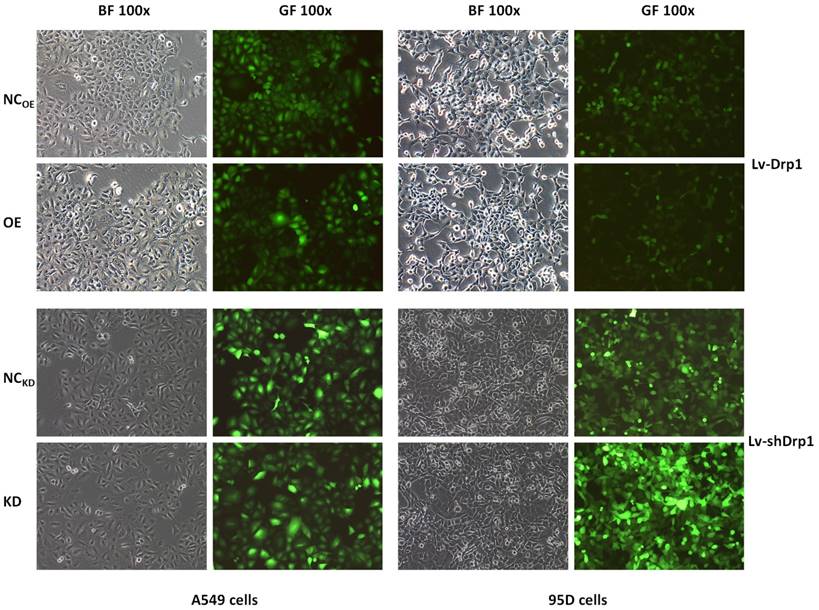 The migration ability of tumor cells after lentivirus infection was observed using a cell wound healing assay. Infected cells (3 × 104) were added to the wells, and the low concentration serum medium was replaced the next day. The central part of the 96-well plate was aligned with a scratch tester and gently pushed upward to form a scratch. The cells were gently rinsed 2-3 times with serum-free medium and cultured in a 5% CO2 incubator at 37 °C. Images were taken under a microscope at 0, 8, and 24 h after migration. The width of the wound at different time points was measured to compare the migration ability of tumor cells.

The proliferation rate of 95D cells in the OE group was significantly higher than that in the control group (NCOE) on the 4th and 5th day (P < 0.05; Fig. 2A, B). After the shDrp1 lentivirus-infected 95D lung cancer cell line was cultured for 5 days, the cell proliferation rate of the KD group was significantly lower than that of the control group (NCKD; P < 0.05; Fig. 3A, B). Similar results were obtained for A549 cells (Fig. 4A, B; Fig. 5A, B). 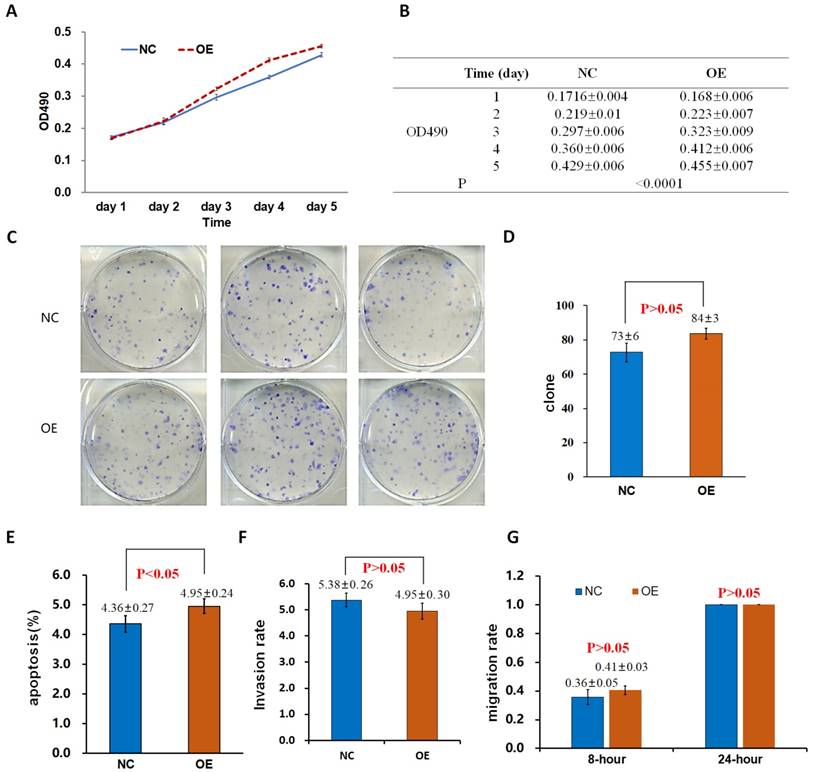 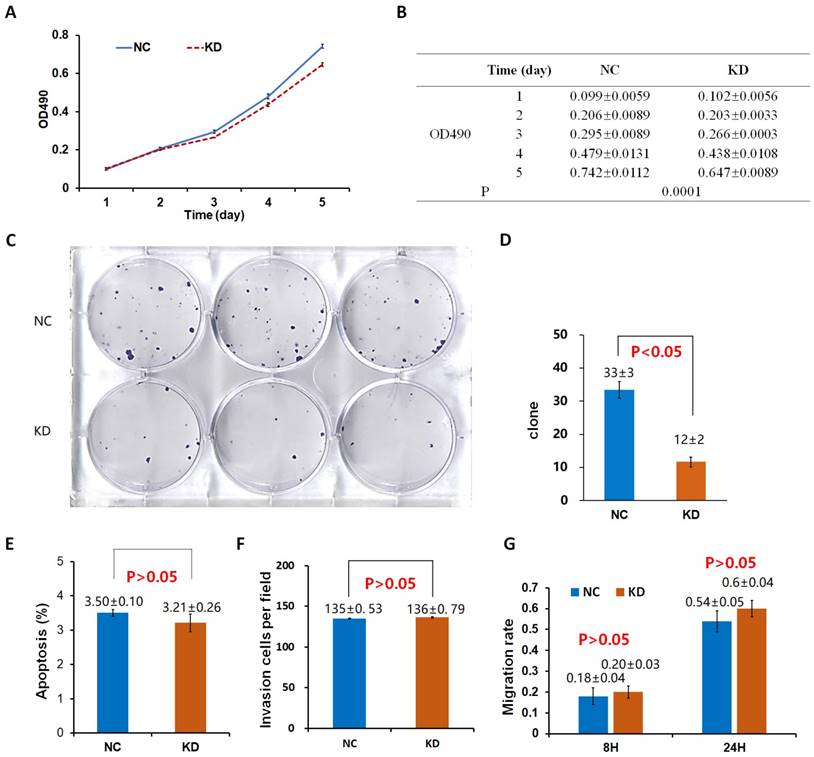 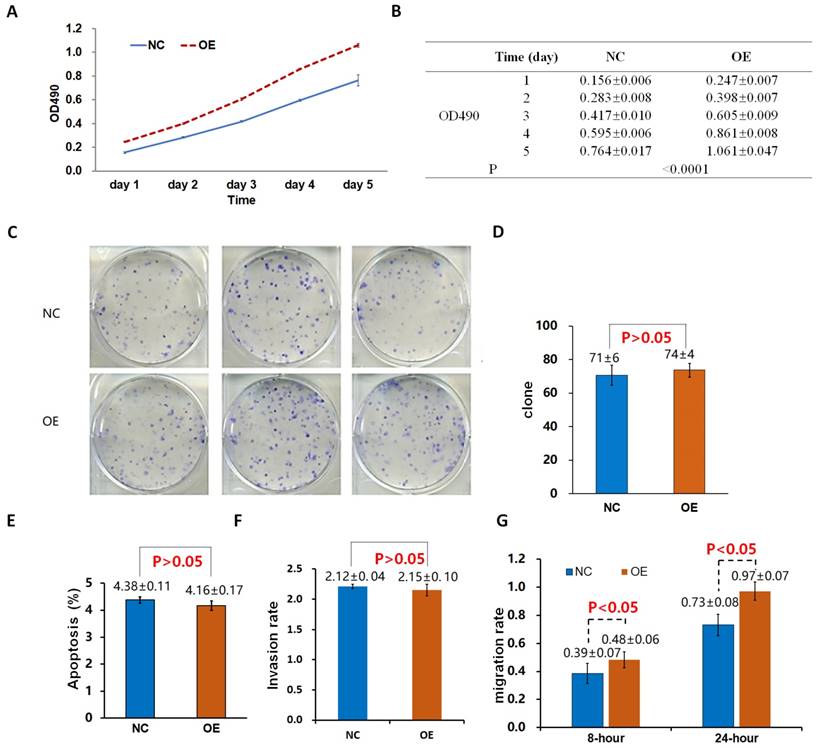 Mitochondrial morphological changes are precisely regulated by multiple proteins [18]. Drp1 is the most important highly conserved guanosine triphosphatase (GTPase) involved in the regulation of mitochondrial fission. The upregulation of Drp1 activity leads to mitochondrial fission, whereas inhibition or downregulation of Drp1 can trigger the formation of a highly intertwined mitochondrial network [19]. In the present study, siRNA-mediated Drp1 knockdown significantly reduced cell proliferation and colony formation in both 95D and A549 cells. In addition, following Drp1 knockdown, the invasion rate and migration rate of A549 cells after 24 h decreased by 25% and 10%, respectively, compared with the control group, whereas the overexpression of Drp1 significantly increased the cell migration rate. These results suggest that the mitochondrial fission protein Drp1 is associated with the proliferation, invasion, and metastasis of lung adenocarcinoma. 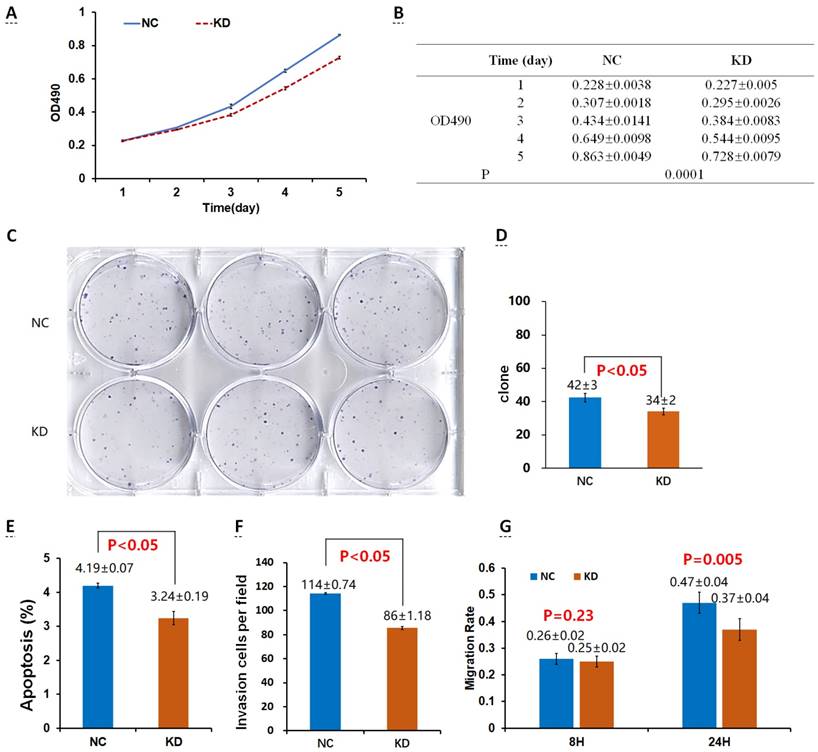 The morphology of mitochondria is an important factor in determining mitochondrial function. Excessive fission and fusion results in the changes of mitochondrial fragmentation and elongation, respectively [17-19]. Mitochondrial fission mediated by Drp1 upregulation is related to the cellular transformation of oncogene RAS. RAS-driven mitochondrial over-fragmentation is critical for cancer metabolism and cell transformation, and knocking down or inhibiting Drp1 can abolish or terminate the transformation [20]. The excessive fission of mitochondria has been found to be associated with carcinogenesis, apoptosis, and proliferation, and even drug resistance [21], in many cancers, such as colorectal cancer [21,23], thyroid cancer [24], and cutaneous squamous cell carcinoma [25]. Our study found that Drp1 knockdown significantly reduced the proliferation and clonal formation of lung adenocarcinoma cells, which is consistent with the findings of Rehman et al. They found that the inhibition of Drp1 expression reduced N-cell xenografts in nude mice and inhibited tumor proliferation [17].

Mitochondrial division plays an important role in the release of apoptosis-promoting factors (proapoptotic factors) into the intermembrane cavities and the intracellular transport of mitochondria mediated by the cytoskeleton. The fused mitochondrial network can dissipate the energy generated by metabolism through the transmission of membrane potential [26]. Inoue-Yamauchi et al. [23] found that siRNA-mediated Drp1 knockdown could promote elongated mitochondria accumulation in human colon cancer cells (HCT116 and SW480 cells) in vitro, and down-regulated Drp1 resulted in an increased cytochrome C (cyt-c) release and a greater than 30% increase in apoptosis rate. The results showed that Drp1 could inhibit the apoptosis of colon cancer cells by regulating the release of cyt-c and the integrity of the mitochondrial membrane. Our study showed that the overexpression or knockdown of Drp1 did not independently induce apoptosis in lung cancer cells because all apoptosis rates were less than 5%. Although the study by Rehman et al. showed that Drp1 knockdown increased the apoptosis rate of lung cancer A549 cells by 3-4 times, the apoptosis rates were all less than 3% [17]. Studies have also shown that Drp1 deletion inhibits mitochondrial fragmentation and cyt-c release induced by apoptotic factors [27,28]. Therefore, how the Drp1 protein participates in the apoptosis of cancer cells needs to be confirmed by further intervention experiments.

The intracellular distribution of mitochondria is a process of movement along microtubules, which is associated with the mitochondrial morphological changes regulated by mitochondrial fission and fusion proteins Drp1 and Opa1 [29]. The mitochondrial network must be split into smaller organelles for transport, and this transport is regulated by motor proteins (or molecular motors) with directional characteristics. Motor proteins, including kinesin and dynein, can convert the chemical energy of ATP high-energy phosphate bonds into mechanical energy, enabling cells to move [30,31]. The mitochondrial network distributed as an electrokinetic complex can transmit the mitochondrial membrane potential produced by proton pumps in the electron respiratory chain. This mechanism is particularly important in dissipating ATP energy generated by cell metabolism [30,32].

There are some limitations to this study. Only the 95D human lung cancer high metastatic cell line and A549 lung adenocarcinoma cell lines were used for in vitro assays. The lack of normal cells, other tumor cells, and xenograft models possibly makes it insufficient to judge the specificity of the in vitro findings. In addition, the detailed mechanisms of the inhibitory effect of Drp1 knockdown on lung cancer cells were not evaluated in this study and need further research in future study.

Our study demonstrates that Drp1 is involved in the regulation of proliferation, invasion, and migration of lung cancer cells in vitro, and inhibiting the signal pathway of Drp1 will contribute to the development of an anti-tumor therapy for lung cancer. However, the underlying mechanisms and clinical applications need further study, and relevant studies are being conducted on the regulatory signal pathway of Drp1.

This study was supported by grants from the National Natural Science Foundation of China (grant no. 81501990).