Renal cell carcinoma (RCC) comprises approximately 1.6% of all new malignancies in Chinese adults for the most recent 3 years [1], and these are primarily renal cell carcinomas, also called renal adenocarcinoma, which occur in the body of the kidney. Kidney cancer incidence rates increased over the past several decades, in part due to incidental diagnoses during abdominal imaging [2]. Surgery, including traditional and laparoscopic (i.e. minimally invasive, performed through very small incisions), is the primary treatment for most RCC patients [3]. Renal cell cancer can often be cured if it is diagnosed and treated when still localized to the kidney and to the immediately surrounding tissue [4]. In addition, the application of prognostic factors can accurately predict prognosis of RCC patients are of dominant interest, not only for patients' individualized risk evaluation but also for the comparison of the results from international clinical multicenter trials [5].

It is evident that the plasminogen-plasmin and coagulation system is a vital component in the biology of neoplastic disease [6, 7]. According the existing literatures, the two parts (fibrinogen and D-dimer) of the plasminogen-plasmin and coagulation system may be related to prognosis in RCC.1) Fibrinogen, a glycoprotein synthesized by hepatocytes with the function of blood coagulation, namely the clotting factors. It is a target molecule at the final step of the coagulation cascade that is converted to fibrin monomers by thrombin and ultimately forms fibrin polymers [8]. A study shows that fibrinogen increases the metastatic potential of circulating tumor cells [9]. And another study shows that preoperative plasma fibrinogen level can be a significant prognostic factor in patients with renal cell carcinoma after surgical treatment [10]. 2) D-dimer is a specific degradation product, after fibrin monomer was crosslinked by activation factor XIII and then was hydrolyzed by fibrinolytic enzyme. D-dimer is a biomarker of specific fibrinolytic process. It is from a kind of crosslinked fibrin clot, what is dissolved by fibrinolytic enzymes. Nowadays, D-dimer has been deemed to a potential biomarker for many diseases [11, 12].

As far as we known, the plasminogen-plasmin and coagulation system are studied infrequently in RCC. In our present study, we retrospectively evaluated the relationships between the fibrinogen, D-dimer and patient survival. In the same time, we sought to determine whether preoperative fibrinogen and D-dimer are prognostic factors. Specially, we stratified all the patients based on these two factors into three cohorts and studied whether the three cohorts have different prognosis or not.

This retrospective analysis included data from 912 consecutive RCC patients who underwent a curative radical or partial nephrectomy at the department of urology in sun yat-sen university cancer center (SYSUCC), Between January 2000 and December 2012. The following items are the inclusion criteria for this research: (i) diagnosed as RCC pathologically; (ii) access to complete clinical data and preoperative blood sampling for D-dimer and fibrinogen levels; (iii) effective and accurate follow-up. Of this data set, the 449 patients were included in our study. All the clinicopathological data were retrieved from the electronic patient records of our center. Informed consent was waived because of the retrospective research of the study and the analysis used anonymous clinical data.

Continuous variables were presented as mean and standard deviations and categorical variables were expressed as frequencies and percentages. To evaluate the best cutoff points of D-dimer and fibrinogen to predict prognosis, we used a validated web-based software [13]. In short, the variable was dichotomized at each possible cutoff point, and Cox proportional hazard models were applied to the variables measured and the survival variable. Survival analysis was executed using the R package “survival.” According to the overall survival status, the optimal cutoff was defined as the point which gave the most significant log-rank cohort split. OS and DFS after surgery were measured by using of Kaplan Meier curves and the log-rank test. Univariate Cox regression analyses were done to compare all the variables and significant prognostic factors identified from the univariate analysis were entered the multivariate Cox regression analyses of survival to test for independence. Hazard ratios (HRs) estimated from the Cox analysis was reported as relative risks with corresponding 95% confidence intervals (CIs). All statistical analyses were performed using SPSS21.0 software (IBM, Armonk, NY) and EmpowerStats software (www.empowerstats.com, X&Y solutions, Inc. Boston MA). All tests were two-sided and a P value <0.05 was considered statistically significant.

Baseline characteristics of all patients (n=449)

To investigate whether the D-dimer and fibrinogen were related to the clinical outcome of RCC patients, univariate and multivariate analyses for OS and DFS were performed. The mean and median follow-up time was 58.71 and 57.72 months. For localized disease, we excluded stage Ⅳ cases resulting in 424 patients with RCC. In our further study, 449 patients were analyzed for OS and 424 were analyzed for DFS. Figure 2 showed the Kaplan-Meier curves for OS and DFS and reveal that high D-dimer and fibrinogen were consistent factors for poor prognosis in RCC patients (P<0.001 for both two tested end points, log-rank test), respectively.

Hazard ratio (HR) for overall survival in dependence of cutoff points for plasma D-dimer (A) and fibrinogen (B). A vertical line designates the chosen cutoff point. The plots were generated using the biostatistical tool, cutoff finder. 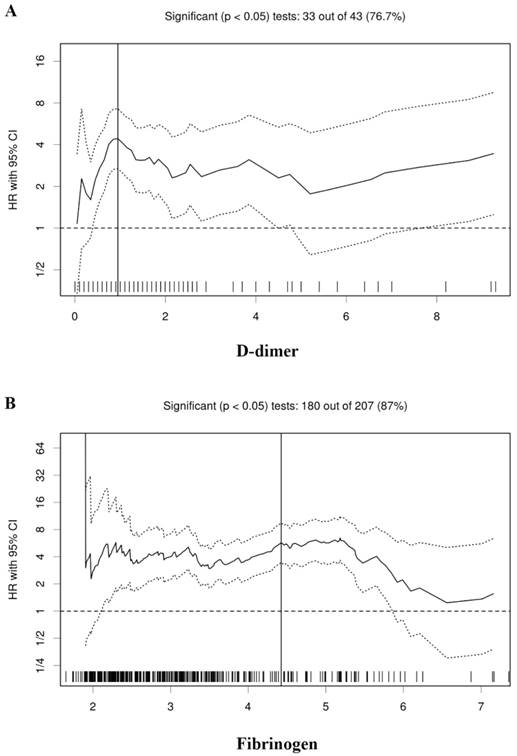 In the present study, we demonstrated that elevated plasma D-dimer or fibrinogen levels were identified as negative prognostic factors for OS and DFS and further research revealed that high and intermediate risk groups were associated with worse OS and PFS of patients with RCC. Despite tremendous development has been made in recent years in terms of genetic, epigenetic and common molecular alterations in RCC [14, 15], pathological examination and traditional clinicopathological prognostic indicators are still the regular diagnostic and prognostic evaluation of RCC. Due to the intricacy of these molecular changes, high costs and the time-consuming preparation, to our best knowledge, little of evidence established how these newly discovered molecular markers influence diagnostic or therapeutic decisions have rendered none of the markers available for routine testing. Regularly measuring blood-based parameters, such as plasma D-dimer and fibrinogen, are rather easy to evaluate without additional laborious efforts for individual risk estimate in preoperative RCC. 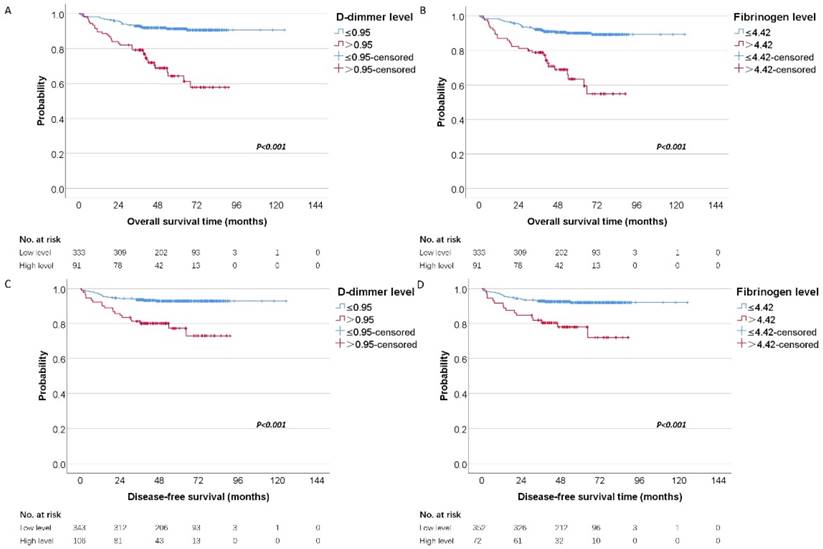 Some researchers showed that preoperative plasma fibrinogen independently predicted poor DFS and cancer-specific survival (CSS), whereas D-dimer only had negative independent prognostic value on OS [8]. Other study demonstrated preoperative plasma fibrinogen was an independent predictor of distant metastasis and poor prognosis for RCC patients and they did not analyzed the prognostic value of D-dimer levels [16]. However, in our study we found elevated D-dimer was associated with poor DFS and OS. The differences in prior studies can be explained by several factors, including the number of patients that 449 patients were enrolled in our study and 128 were in the research of Erdem, S. et al. [8], heterogeneity in the race in the populations studied, the latter being the most critical aspect in calculating the cutoff value. We used the validated web-based software Cutoff Finder which determined a prognostic cutoff point was to optimize the significance of the split in the Kaplan-Meier plot [13].

Fibrinogen is synthesized in the liver, and its level is affected by in vivo infection or inflammation [17]. Fibrinogen converted to insoluble fibrin by activated thrombin significantly affects blood clotting, fibrinolysis, inflammatory response, wound healing and neoplasia [18]. Pretherapeutic plasma fibrinogen levels have been associated with the clinical outcome of patients with various cancers, including urothelial, colorectal, ovarian, and lung cancer [19-22]. The molecular mechanisms underlying the relationships between high plasma fibrinogen and worse survival of patients with RCC have not been fully elucidated [23]. However, several possible mechanisms support the observations. This coagulation cascade could be activated by procoagulant activities, which many tumor cells exhibit and that are implicated in the promotion of haematogenous metastasis. Palumbo et al. [9] reported that fibrinogen facilitated tumor stroma formation and promoted the sustained adhesion of circulating tumor cells in the microvasculature, inducing tumor progression and dissemination. Moreover, elevated fibrinogen may protect tumor cell from host's immune defense system. Gunji and Gorelik [24] proposed that fibrin deposition on tumor cells may protect the tumor cell from natural killer cells' cytotoxicity during tumor migration through the blood stream. Subsequently, Zheng et al. [25] also reported that fibrinogen could activate tumor cell adhesion with platelets, forming a dense fibrin layer around the tumor cell that can protect it from the lethal interaction with natural killer cells in the presence of thrombin. Other researchers also suggested that the fibrin matrix may form stromal tissue that provides a nutrient and gas channel for malignant cells [26, 27]. For the relationship between D-dimer and tumor progression, the most probable reason is that the abnormal activation of the coagulation-fibrinolysis system. The coagulation-fibrinolysis system is activated abnormally, and it results in promoting tumor growth, invasion, metastasis and angiogenesis [28]. Most important of all, abnormal activation of coagulation-fibrinolysis system is reflected by elevated plasma D-dimer level. Our results also support the preoperative elevated D-dimer and fibrinogen levels are as negative prognostic factors for RCC patients.

Survival of patients with these three cohorts (low risk, intermediate risk and high risk). Kaplan-Meier estimates of (A) overall survival and disease-free survival (B) according to different risk groups. Meanwhile, the 1-year, 3-year and 5-year survival curves were shown for OS (C, E, G) and DFS (D, F, H). 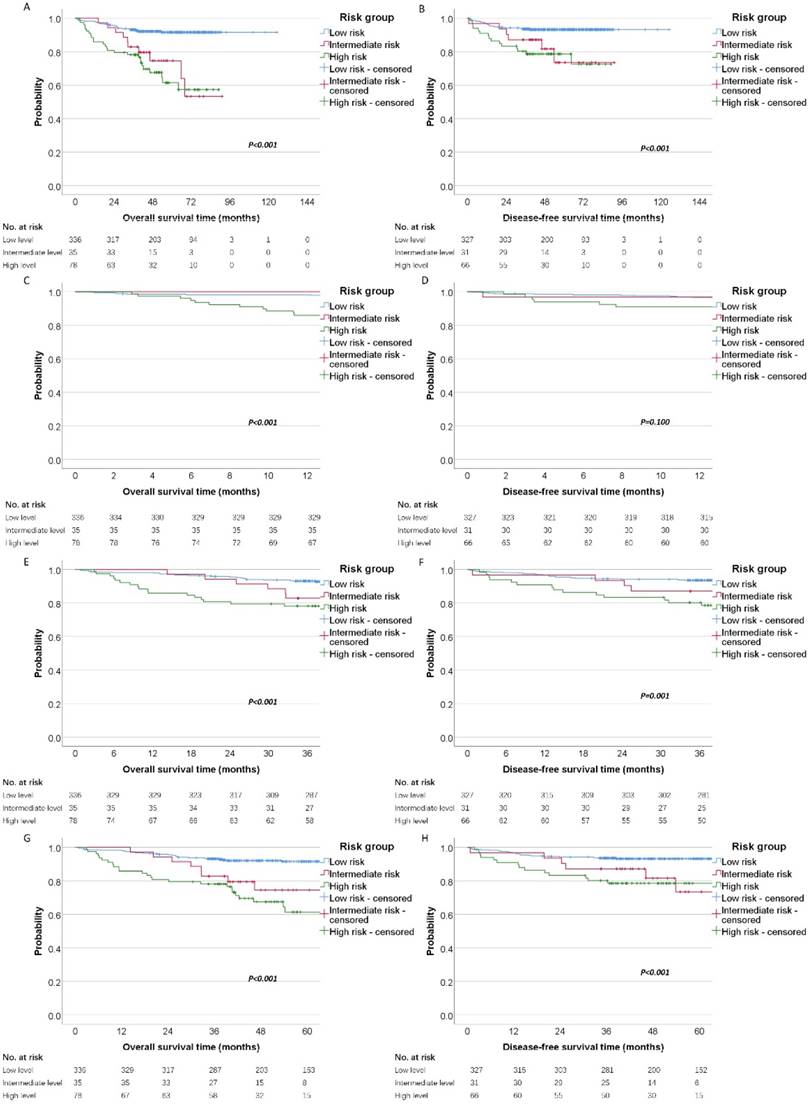 Our results indicate that the high and intermediate risk may inform frequency of surveillance. Patients with high risk should be close follow-up. Furthermore, according to the different year survival rate for DFS and OS, when the plasma D-dimer or fibrinogen was higher than the cutoff value, the worse trend of survival status was being seen. Given our results and the data from previous basic studies, increased coagulation and fibrinolytic activities appear to be associated with increased risks of tumor progression and metastasis among patients with RCC. Concentrations of D-dimer and fibrinogen before surgery may also offer a useful marker of recurrence and metastasis in RCC patients following resection. Furthermore, functional inhibition of fibrinogen and other coagulation factors might represent novel strategies for treating RCC. Further investigations are needed to clarify the relationships among circulating coagulation and angiogenic factors in neoplastic tissues.

As with all retrospective studies, limitations of our study remain some limitations. Firstly, our outcomes originated from retrospective data. Secondly, the study cohort was small, despite being relatively large compared to other such investigations of RCC patients. Nonetheless, even considering these limitations, our data clearly indicate that increased preoperative D-dimer and fibrinogen might represent independent prognostic factors for OS and DFS in RCC patients.

In conclusion, preoperatively elevated D-dimer and fibrinogen seems to represent independent predictors with respect to patients' OS and DFS in RCC. Combining both plasma fibrinogen and D-dimer can improve the prognostic accuracy and act as a select criterion for risk factor-stratified patient management in RCC.

The institutional review board of SYSUCC approved the study. Informed consent was waived because of the retrospective research of the study and the analysis used anonymous clinical data.

Key raw data were uploaded onto the Research Data Deposit public platform (RDD), with the approval number of RDDA2019001063.

This study was supported by grants from National Natural Science Foundation of China (Grant No. 81202013); Medical Scientific Research Foundation of Guangdong Province, China (Grant No. B2012131). Guangdong science and Technology Department Project (Grant No.2017A020215150). The funders had no role in study design, data collection and analysis, decision to publish, or preparation of the manuscript.