Synaptotagmin12 (SYT12) has been well characterized as the regulator of transmitter release in the nervous system, however the relevance and molecular mechanisms of SYT12 in oral squamous cell carcinoma (OSCC) are not understood. In the current study, we investigated the expression of SYT12 and its molecular biological functions in OSCC by quantitative reverse transcriptase polymerase chain reaction, immunoblot analysis, and immunohistochemistry. SYT12 were up-regulated significantly in OSCC-derived cell lines and primary OSCC tissue compared with the normal counterparts (P<0.05) and the SYT12 expression levels were correlated significantly with clinical indicators, such as the primary tumoral size, lymph node metastasis, and TNM stage (P<0.05). SYT12 knockdown OSCC cells showed depressed cellular proliferation, migration, and invasion with cell cycle arrest at G1 phase. Surprisingly, we found increased calcium/calmodulin-dependent protein kinase 2 (CAMK2) inhibitor 1 (CAMK2N1) and decreased CAMK2-phosphorylation in the knockdown cells. Furthermore, treatment with L-3, 4-dihydroxyphenylalanine (L-dopa), a drug approved for Parkinson's disease, led to down-regulation of SYT12 and similar phenotypes to SYT12 knockdown cells. Taken together, we concluded that SYT12 plays a significant role in OSCC progression via CAMK2N1 and CAMK2, and that L-dopa would be a new drug for OSCC treatment through the SYT12 expression.

Oral cancer is the sixth most prevalent form of cancer [1]. Oral squamous cell carcinomas (OSCCs), comprising about 90% of all oral cancer [2], are the highest morbidity of all head and neck cancers [3]. More than 500,000 new cases and 300,000 deaths annually were reported [4]. Although great progress has been made for the treatment and diagnosis, the 5-year survival rates for patients with OSCCs remain unchanged at 50% to 55% from nearly 5 decades ago [5]. Therefore, understanding the molecular mechanisms underlying OSCC development and progression is necessary for improving the prognoses.

Synaptotagmins (SYTs) are membrane proteins comprised of a short N-terminal noncytoplasmic sequence, a single transmembrane region, a linker sequence of varying lengths, and two C2 domains. The SYTs were discovered because they are the Ca2+ sensor for neurotransmitter release in presynaptic nerve terminals, and SYT1 was identified first [6]. Eight of these SYTs have C2 domains that bind to Ca2+ (SYT1-3, 5-7, 9, and 10) while the other eight do not (Syt4, 8, and 11-16) [7]. The SYT12 gene encodes a family of proteins involved in regulating transmitter release in the nervous system [8,9].

A recent study reported that SYT12 overexpression was correlated with metastasis and SYT12 was a biomarker that tended to predict greater disease progression in patients with papillary thyroid cancer [10]. However, the molecular biologic role of SYT12 in cancer remains unknown. In the current study, we explain for the first time the novel molecular mechanism of SYT12 in OSCCs and evaluate a new candidate for medical treatment of OSCCs.

The ethical committee of the Graduate School of Medicine, Chiba University, approved the research protocol (protocol number 680). All patients provided written informed consent before inclusion in the study.

Immunoblotting was performed as previously reported [15,19] with each appropriate antibody mentioned previously.

IHC and calculation of the IHC score were performed as described previously [15,19-21], with appropriate antibody, anti-SYT12 (1:100 dilution), at 4°C. SYT12 was classified as positive and negative using the median score of all tumors as the cut-off points [22].

To determine the appropriate concentration of L-dopa for OSCC cells, we performed the MTS assay, qRT-PCR, and immunoblotting. We then evaluate whether L-dopa affected the cellular proliferation and cell cycle. The cells were treated with L-dopa (50 µM) or dimethylsulfoxide as controls.

Each experiment was repeated at least three times, and all data are presented as the mean ± standard error of the mean. Statistical differences were analyzed using Fisher's exact test and a two-tailed, unpaired Student's t-test with Welch's correction for unequal variances using the BellCurve for Excel (Social Survey Research Information Co., Ltd.). P < 0.05 was considered statistically significant.

To investigate the status of the SYT12 expression as a cancer-related gene, we first conducted qRT-PCR and immunoblot analysis with 11 OSCC-derived cell lines and HNOKs. SYT12 mRNA expression was up-regulated significantly (P < 0.05) in OSCC-derived cell lines other than Ho-1-U-1 compared with the HNOKs (Fig. 1A). Fig. 1B shows representative results of immunoblot analysis. The SYT12 protein level also increased in all OSCC cell lines compared with the HNOKs (Fig. 1B).

We evaluated the SYT12 expression in primary OSCCs by IHC and the IHC scoring system [22,27,31]. In oral normal tissues, the SYT12 IHC scores ranged from 8.1 to 134.2 (median, 43.0), while in OSCCs the scores ranged from 80.3 to 219.0 (median, 170.2). These IHC scores in primary OSCCs were significantly (P < 0.05) higher than in normal oral tissues (Fig. 1C). Intense cytoplasmic and cell membrane staining was seen for SYT12, whereas the normal oral tissues showed negative staining. Representative IHC figures for SYT12 staining are shown (×200 magnification) (Fig. 1D). In the clinical classifications, SYT12-positive OSCCs (IHC scores > median, 170.2) were associated significantly (P < 0.05) with tumor size, regional lymph node metastasis, and the TNM stage of the OSCCs (Table 1).

HSC-3 and SAS were subjected to knockdown experiments because they had higher expression levels among the OSCC cell lines. We transfected shSYT12 and shMock vectors into the cells. To investigate the efficiency of the transfection, we performed qRT-PCR and immunoblot analysis. The SYT12 mRNA and protein expression levels in the shSYT12 cells decreased significantly (P < 0.05) compared with the shMock cells (Fig. 2A, B). 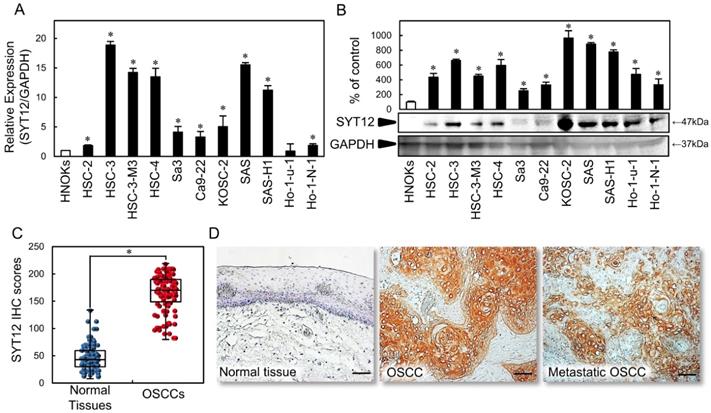 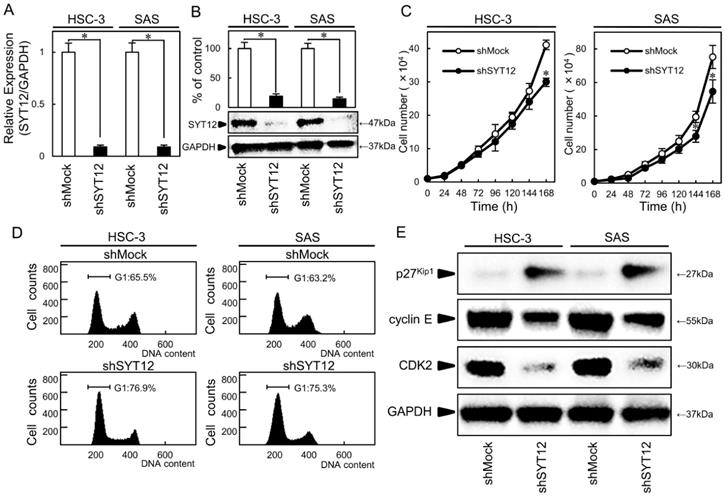 Correlation between SYT12 expression and clinical classification in OSCCs.

Effect of shSYT12 cells on cellular growth and cell cycle

We detected the SYT12 inhibitor, L-dopa, using Ingenuity Pathway Analysis. To investigate the efficiency of L-dopa for OSCC cells (HSC-3, SAS), we performed an MTS assay, which showed significantly (P<0.05) decreased cellular viability above L-dopa concentrations of 200 µM in a concentration-dependent manner (Fig. 4A). The inhibitory concentration 50s (IC50) for L-dopa in the HSC-3 and SAS cell lines were 259 nM and 196 nM, respectively. To verify the inhibitory effect of L-dopa on SYT12, the SYT12 expression was examined after treatment which various concentrations of L-dopa, by qRT-PCR and immunoblot analysis. L-dopa significantly (P<0.05) inhibited the SYT12 mRNA and protein expression levels above concentrations of 50 µM in both cells compared with the control cells (Fig. 4B, C). Cellular growth of the L-dopa-treated cells were significantly (P < 0.05) lower than the control cells at 144 h (Fig. 4D). Cell cycle analysis showed that the percentage of the L-dopa-treated cells at the G1 phase was significantly (P < 0.05) higher than the control cells (Fig. 4E). The addition, L-dopa-treated cells showed that the p27Kip1 protein expression levels were up-regulated and the cyclin E and CDK2 levels were down-regulated compared with the control cells (Fig. 4F). These results indicated that L-dopa may regulate critical functions associated with tumoral growth through down-regulation of SYT12.

Previous studies have shown that the SYT family genes regulate proliferation, invasion, and metastasis in several cancer cells in addition to their roles in neuronal cells [32-35]. Of SYT family, SYT12 is detected as a biomarker of papillary thyroid cancer [10], but the molecular biologic function of SYT12 in other cancer cells and the interactions between SYT12 and cancer-associated signaling pathways remain unknown. To identify the SYT12-related genes, we conducted PCR array analysis using SYT12 knockdown cells and found that SYT12 affects the expression of CAMK2N1, inhibitor type1 of CAMK2, which is a known potent modulator of tumorigenesis [36]. CAMK2N1 expression has tumor-suppressing roles, such as depressed cell proliferation and cell cycle arrest in certain cancers [37-39]. Actually, SYT12 knockdown cells showed significant overexpression of CAMK2N1 (Fig. 3C), suggesting that down-regulation of SYT12 suppressed tumoral growth with cell cycle arrest by CAMK2N1 overexpression. CAMK2 is involved in controlling a range of cellular processes, including synaptic plasticity and memory consolidation [40,41], vascular smooth muscle polarization [42], and cellular proliferation [43]. Moreover, several studies also suggest that CAMK2 regulates metastasis in several cancers [44-46]. The biologic properties of CAMK2 are controlled by multisite phosphorylations; when intracellular calcium levels rise, calcium binds to calmodulin, which activates CAMK2 and leads to self-phosphorylation of CAMK2 at T286 [47,48]. Therefore, SYT12 may activate CAMK2 by decreased CAMK2N1 and increasing the intracellular calcium concentration in OSCCs, as a result, they promote the OSCC progression. 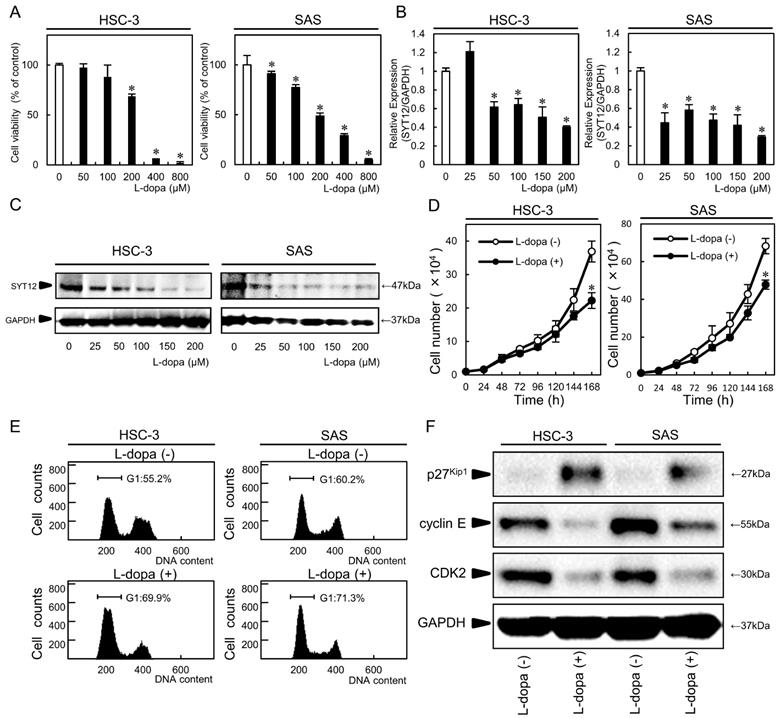 L-dopa is used widely to increase dopamine concentrations in the treatment of Parkinson's disease with a dopa decarboxylase inhibitor, such as carbidopa and benserazide, which inhibit aromatic amino acid decarboxylase, thus preventing the conversion of L-dopa into dopamine [49]. L-dopa was recently reported to suppress cellular growth via down-regulation of prolactin-mediated JAK2/STAT5A in breast cancer cells [50], and carbidopa was reported to be an aryl hydrocarbon receptor agonist and to suppress the growth of pancreatic cancer [51]. However, the role of L-dopa in oral cancer remains unknown. In the current study, we revealed for the first time that L-dopa led to down-regulation of SYT12 and decreased cellular proliferation by the cell cycle arrest at the G1 phase via p27Kip1.

In conclusion, we present here that SYT12 plays a significant role in OSCC progression via CAMK2N1 and CAMK2, and that L-dopa would be a new drug for OSCC treatment through the SYT12 expression.

We thank Lynda C. Charters for editing this manuscript. The authors received no financial support.

47. Skelding KA, Rostas JAP. Regulation of CaMKII In vivo: The Importance of Targeting and the Intracellular Microenvironment. Neurochem Res. 2009;34:1792-804