Materials and Methods: Between January 2005 and November 2014, 207 lung cancer patients who had been treated with first-line palliative chemotherapy were enrolled. Renal function was assessed during every cycle of chemotherapy. AKI was defined based on changes in serum creatinine levels as described in the Kidney Disease: Improving Global Outcomes guidelines. Clinical outcomes were evaluated depending on AKI occurrence during the first-line chemotherapy.

Acute kidney injury (AKI) is a commonly encountered complication in cancer patients, and it can interrupt cancer therapy and increase patient morbidity and mortality [1]. Cancer patients may be at increased risk of AKI owing to malignant infiltration, tumor lysis syndrome, urinary tract obstruction, sepsis, radiotherapy, or use of nephrotoxic drugs [2, 3]. In addition, common comorbidities to cancer such as chronic kidney disease, congestive heart failure, hypertension, diabetes, and liver disease may increase the risk of AKI [4-6]. Furthermore, cancer therapy is becoming more common in elderly patients, a subpopulation that is particularly vulnerable to the adverse nephrotoxic effects of many drugs as well as to the use of intravenous radiocontrast agents [7]. AKI can preclude optimal management of malignancy as changes in chemotherapeutic drug pharmacokinetics related to renal dysfunction may result in under-dosing, with a decreased chance of achieving remission, or in over-dosing, with an increased risk of toxicity [8]. There are several direct or indirect risk factors for AKI development during palliative chemotherapy in advanced non-small cell lung cancer (NSCLC) and extensive-stage small cell lung cancer (SCLC). The reference chemotherapeutic regimen for lung cancer is a double combination of a platinum compound (cisplatin or carboplatin) with gemcitabine, vinorelbine, or taxanes (paclitaxel or docetaxel) [9], and AKI occurs in 20%-30% of patients treated with these drugs [10]. Risk factors that are known to increase the risk of cisplatin-induced nephrotoxicity include genetic variation, race, sex, age, comorbidity, and smoking [11].

This is retrospective cohort study of adult patients who had undergone first-line palliative chemotherapy for the treatment of lung cancer from January 2005 to November 2014 at Chung-Ang University Hospital, Seoul, South Korea. A total of 255 patients were reviewed and 207 were enrolled in the study.

The inclusion criteria were as follows: (1) diagnosis of advanced non-small cell lung cancer (NSCLC, stage IIIB-stage IV) or extensive-stage small cell lung cancer (SCLC ED); SCLC ED means stage IV (T any, N any, M1a/b) or T3-4 cancer caused by multiple lung nodules that are too extensive or have tumor/nodal volume that is too large to be encompassed in a tolerable radiation plan [12]; (2) administration of first-line palliative chemotherapy; and (3) availability of baseline serum creatinine values. Patients were excluded if they (1) received epidermal growth factor receptor tyrosine kinase inhibitors (gefitinib, erlotinib) and anaplastic lymphoma kinase inhibitor (crizotinib); (2) received concurrent chemoradiotherapy or chemotherapy followed by radiotherapy; (3) had an Eastern Cooperative Oncology Group (ECOG) score ≥ 3; or (4) had received previous adjuvant chemotherapy within the past 6 months.

The estimated glomerular filtration rate (eGFR, mL/min/1.73 m2) was calculated using the Chronic Kidney Disease Epidemiology (CKD-EPI) equation [13, 14]. eGFR was evaluated before initiating each palliative chemotherapy cycle, after the last chemotherapy cycle, and every 6 months during the follow-up period. AKI was defined based on changes in serum creatinine (SCr) levels as described in the Kidney Disease: Improving Global Outcomes (KDIGO) guidelines. AKI was defined as an absolute increase in SCr level by ≥0.3 mg/dL within 48 hours, and/or an increase of more than 1.5-fold from the baseline SCr level within 7 days. The severity of AKI was classified into three stages as follows: AKI stage 1, a 1.5-1.9-fold increase in SCr levels from baseline or an increase by ≥0.3 mg/dL within 48 hours; AKI stage 2, a 2.0-2.9-fold increase in SCr levels from baseline; and AKI stage 3, >3-fold increase in SCr levels from baseline or SCr level of ≥4.0 mg/dL or initiation of renal replacement therapy [15]. In this study, urine output criteria were not considered because of the inaccuracy of the data being collected retrospectively. Complete recovery was defined as the absence of AKI, and incomplete recovery as persistent AKI with a decrease in AKI stage compared with their maximal AKI stage. A persistent increase in absolute SCr of ≥0.3 mg/dL or ≥1.5-fold from the baseline SCr level was also considered as incomplete recovery [15]. For each AKI event, possible causes or associated factors were retrospectively evaluated. Renal outcomes after the events were divided as follows: complete recovery from the AKI; progression to chronic kidney disease (CKD); end-stage renal disease (ESRD); or death with functioning kidney. AKI occurrence was evaluated during first-line palliative chemotherapy.

Other Definitions and Grouping

Relative dose intensity (RDI) was defined as the ratio of the delivered dose of a single drug (or of several drugs in a combination chemotherapy regimen) to the planned dose of the drug [8]. Time to treatment failure (TTF) was defined as the duration from the first day of first-line palliative chemotherapy to discontinuation of treatment for any reason, including disease progression, treatment toxicity, patient's refusal, or death. Progression-free survival (PFS) was the duration from the first day of first-line palliative chemotherapy to disease progression or death. Overall survival (OS) was defined as duration from the first day of first-line palliative chemotherapy to death from any cause. Early cycle was defined as within two cycles of chemotherapy, late cycle was defined as three or more cycles of chemotherapy. To identify the risk factors potentially associated with the occurrence of AKI during chemotherapy, we examined the relationship between AKI incidence and the following CKD risk factors: old age (≥70 years), diabetes mellitus, hypertension, and smoking [16]. We also assessed the following potential risk factors: sex, ECOG 0-1 vs. 2, cisplatin use, and the number of chemotherapy cycles conducted [17-19]. We accepted general management for AKI prevention. To increase the renal excretion of cisplatin, fluid therapy was uniformly conducted with normal saline. Normal saline was administered at a rate of 500 mL/hr and separately 1 L normal saline before and after cisplatin, and simultaneously 20% mannitol 70 mL was administered after cisplatin administration [20, 21].

We evaluated AKI incidence during first-line palliative chemotherapy, TTF, PFS, OS, risk factors, and therapeutic compliance according to the occurrence of AKI. Each end point was measured at the beginning of every chemotherapy cycle. The objective response rate (ORR) was assessed by the Response Evaluation Criteria In Solid Tumors (RECIST) 1.1.

All statistical analyses were performed using the SPSS 19 (SPSS Inc., Chicago, IL, USA) software package. Differences in categorical variables between the two groups were determined by Chi-square test. Differences in continuous variables between the two groups were compared using Student's t-test. Categorical data are expressed as percentages, and continuous variables are expressed as means ± standard deviation or median (range). For all tests, a P value (two-tailed) of <0.05 was considered statistically significant.

The logistic regression model was used to identify independent risk factors of AKI by calculating odds ratios (ORs) and 95% confidence intervals (CIs). Univariate analyses were performed with variables, such age (<70 of age or ≥70 years of age), sex, cancer stage, performance status, response, smoking, co-morbidity, and cisplatin use. In addition, multivariate analysis was conducted using logistic regression models for variables with a P value <0.1 in the univariate analysis including achievement of response, chemotherapy cycle, and smoking.

The Institutional Review Board of the Chung-Ang University College of Medicine (C2015003) approved the study. The requirement of informed consent was waived as the study was based on the retrospective analyses of existing administrative and clinical data. 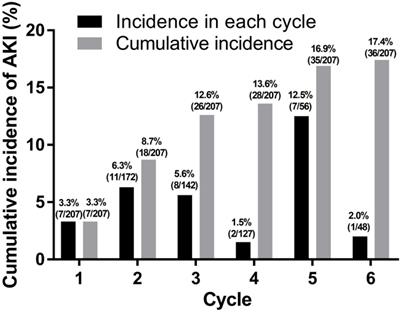 aCKD by history taking is based on patients' awareness of having CKD, and CKD by eGFR is based on the calculated CKD-EPI eGFR < 60 ml/min/1.73 m2.

Univariate and multivariate analyses of factors associated with AKI incidence during chemotherapy (N=207).

None of the 36 patients with AKI required chemotherapy dose reduction or chemotherapy delay due to AKI. Among the patients with AKI, chemotherapy was discontinued due to disease progression in 25 patients and toxicity in 6 patients. The causes of toxicity were neutropenia, arrhythmia, pneumonia, anorexia, and cerebral infarction. Additionally, one patient required a change in regimen from cisplatin to carboplatin because of the development of AKI.

Renal Outcomes of AKI during Chemotherapy

Previous studies have demonstrated that old age (≥70 years), female sex, current smoking, cardiovascular diseases (hypertension and ischemic heart disease), and diabetes mellitus increase the risk of AKI in lung cancer patients [18, 22, 24]. In this study, the occurrence of AKI was only associated with the number of chemotherapy cycles administered. Age, combination chemotherapy, and comorbidities did not affect the occurrence of AKI during chemotherapy. Most of the elderly patients developed mild AKI, but continued receiving chemotherapy.

A previous study reported that a cumulative exposure to cisplatin can cause acute tubular necrosis and may lead to glomerular damage [5]. In another study, nephrotoxicity developed in 28-36% patients who received a single dose (50 mg/m2) of cisplatin [25]. In our study, nephrotoxicity was found in 18.9% of patients who received cisplatin-based combination chemotherapy; moreover, the odds ratio of developing AKI increased by 1.61 times with an increase in a single cycle of chemotherapy.

TTF was significantly longer in the AKI group than in the non-AKI group; however, PFS and OS was not different between the two groups. The reason for the discrepancy between TTF and PFS is likely that AKI that developed in the early cycles of the first-line chemotherapy was mild and reversible, and the chemotherapy could be continued in most cases; conversely, AKI developed in the late cycles of the first-line chemotherapy was caused by long-term chemotherapy. Furthermore, these patients had better ORR and DCR than those in the non-AKI group. This result may imply that treatment-induced AKI is associated with properly conducted chemotherapy and favorable outcomes in lung cancer patients. Another possible reason is that the non-AKI group had a higher number of patients refusing treatment. Therefore, the duration of AKI development did not affect survival.

We assessed the occurrence of AKI according to the KDIGO AKI definition. This could have been the cause of disparity between the retrospective AKI diagnosis and detection of AKI at that time point by the physician. There was a tendency of delayed AKI detection, especially for mild AKI (Stage 1). Patients who developed stage 1 AKI were usually prescribed the same chemotherapeutic agents with the same doses until more severe AKI or persistent renal function deterioration developed. Occurrence of stage 1 AKI with normal renal function could remain easily undetected, especially when the increased serum creatinine level was also within the normal range. It could be also related to the positive outcome of TTF in the AKI group. The difference between PFS and TTF in the non-AKI group was attributable to other causes except disease progression. The most common cause of discontinued chemotherapy in the non-AKI group was patient's refusal (33 patients). Eighteen patients discontinued chemotherapy due to toxicity from causes other than AKI, and 13 patients discontinued chemotherapy due to physician reluctance. For the above reasons, the response could not be evaluated in 20.5% patients in the non-AKI group.

This study had some limitations. The study has a retrospective design, associations could only be inferred. There could be inevitable biases due to patient selection, follow-up, or interpretation of the outcomes. The AKI group received more cycles of chemotherapy because the AKI events mostly were mild and reversible or possibly because compliance of the AKI group was better than that of the others. Therefore, we concluded that physicians should be more careful about assessing the AKI events. Despite the limitations, we strictly defined AKI according to the latest guidelines. In addition, our study examined the relation between AKI and its risk factors, clinical outcomes, and prognosis during chemotherapy. Our results are meaningful because we focused on the occurrence and prognosis of AKI itself as well as that of cancer-related outcomes.

7. Salahudeen AK, Bonventre JV. Onconephrology: the latest frontier in the war against kidney disease. Journal of the American Society of Nephrology: JASN. 2013;24:26-30