Macrophages on the Peritoneum are involved in Gastric Cancer Peritoneal Metastasis

Gastric cancer (GC), one of the most common cancers worldwide, marks the 4th most common rank of prevalence and the 2nd highest rate of cancer-related mortality [1-4]. The prognosis of GC patients is poor, whose 5-year survival rate is less than 20%, despite radical surgery can be applied to those with the early stages of the disease [5-7]. Even received an R0 (no residue tumor) radical resection, GC patients still have a relatively high risk of recurrence. A retrospective analysis for GC patients in the United States showed that 42% of GC patients undergoing an R0 resection had at least one recurrent event after surgery, among whom 76% were detected within 2 years after surgery [8]. In patients with recurrent GC, 29% have peritoneal metastasis, which represents the most prevalent pattern of relapse [9].

Peritoneal metastasis of GC is one of the incurable factors [10]. A fraction of GC patients are diagnosed with peritoneal dissemination before or during the operation, despite an increased number of early GC patients are being detected by a routine screening program [7]. A Japanese cohort [9] demonstrated that the peritoneum was the most frequent site of post-operative recurrence. The outcome of GC peritoneal metastasis patients is extremely poor, whose median overall survival was reported to be only 3.1 months if left untreated [11]. Although strategies for GC peritoneal spread have been developed, such as peritoneal cytoreductive surgery plus local or systemic chemotherapy [12], the outcome remains pessimistic. More importantly, molecular mechanisms of GC peritoneal metastasis are poorly understood.

As another half of cancer, cancer stromal cells play an important role during tumor initiation and progression [13, 14]. Cancer-related inflammation is an imperative component of the cancer stroma [13, 15-17], where tumor-associated macrophages (TAM) are critical for supporting tumor growth and metastasis [18, 19]. Published clinical data have demonstrated that the abundance of TAM is negatively related to the prognosis in prostate, ovarian and cervical cancer patients, but the data for GC are contradictory [20]. TAM support tumor growth and progression by releasing growth factors, proteolytic enzymes, cytokines, chemokines, and other mediators, which are critical for angiogenesis and tumor metastasis [19, 21]. However, the above-mentioned mechanisms of TAM have not been tested in the context of GC peritoneal metastasis.

Although TAM have been shown to be supportive for tumor aggression during GC angiogenesis [22], the relationship of TAM and GC peritoneal metastasis remains to be unappreciated. Therefore, the current study aimed to test the hypothesis that TAM could have supportive effects during the process of GC peritoneal metastasis. We demonstrate here that macrophages in the peritoneum rather than the primary tumor site play a critical role in supporting metastatic tumor cells to develop by producing EGF and VEGF.

Between October 2010 and August 2013, patients who were diagnosed with GC and received surgery as the initial treatment in our department were enrolled in this study. All patients obtained the histological confirmation of gastric adenocarcinoma and computerized tomography (CT) scan assessments of negative remote metastasis before surgery. The criteria for recruitment of patients with peritoneal metastasis was that a clear peritoneal lesion could be removed for histological diagnosis, which was subsequently verified to be metastatic cancer; whereas the criteria for non-peritoneal metastasis were: (1) no obvious peritoneal spread was observed during surgery; (2) no ascites, and the peritoneal lavage led to a negative cytological result; (3) frozen sections for suspect lesions of the peritoneum showed no evidence of metastasis; and (4) patients had more than 2 years of cancer-free survival after surgery. In order to make recruited patients comparable between groups, only patients with the subserosa invasion (T3) were involved in this cohort. The disease stages of gastric cancer in this cohort were classified according to the Japanese Classification of Gastric Carcinoma--3rd English Edition [23]. The characteristics of patients have been summarized in Table 1. All patients were followed up until death or up to 5 years after surgery.

Surgically resected samples, including the primary tumors, surgical margins, suspicious peritoneal metastatic lesions, normal peritoneal tissue adjacent to the corresponding possible peritoneal metastasis, and a biopsy from the pouch of Douglas, were collected immediately after removal, fixed with formalin and subsequently embedded with paraffin. All specimens were cut with 4- to 6-μm of thickness and stained with hematoxylin and eosin. The histological diagnosis and grade were performed according to the Japanese Classification of Gastric Carcinoma-- 3rd English Edition [23].

Consecutive 4- to 6-μm sections were cut from each specimen and stained with the corresponding primary antibodies. The primary antibodies used in this study included CD68 (a marker for macrophages), CD163 (a marker for M2 macrophages), CD34 (a marker for progenitor endothelial cells as well as neo-angiogenesis [24]), epidermal growth factor (EGF), and vascular endothelial growth factor (VEGF). Information regarding manufacturers and titration of antibodies was listed in Table 2. Corresponding isotype control antibodies were served as background staining. Slides were assessed by two pathologists blindly on a multi-headed microscope, using a similar approach published previously [25]. The numbers of CD68-, CD163-, and CD34-positive cells per 400

The peritoneal lavage was obtained from a fraction of patients in our cohort (20 patients without peritoneal metastasis, and 20 with metastasis), according to a published paper [26]. Biopsy samples of the pouch of Douglas were dissociated to achieve single-cell suspensions. Cells were incubated with FC blockers (eBioscience, Thermo Fisher Scientific, Waltham, MA, USA) before incubation with targeted antibodies. Macrophages were defined as CD45+CD68+ (florescence-conjugated antibodies, PE and FITC, respectively; both from eBioscience). Intracellular staining of EGF and VEGE were performed by using the corresponding fluorescence APC-conjugated antibodies (eBioscience) and a permeabilization-fixation kit (eBioscience). The titrations of antibodies were used based on the manufacturer's instructions. A total of 10,000 cells was applied using an Original Attune Flow cytometer (Applied Biosystems, Foster City, CA, USA). The data were analyzed by Kaluza software 1.3 (Beckman Coulter, Brea, CA, USA). The proportions of CD45+CD68+EGF+ cells in CD45+ cells and CD45+CD68+VEGF+ cells in CD45+ cells were calculated and compared between patients with and without peritoneal metastasis.

Data were analyzed using GraphPad Prism 6 (GraphPad Software, San Diego, CA, USA). The equality of comparisons between proportions was analyzed using Fisher's exact test. The numbers of CD68-, CD163- and CD34-positive cells were presented as mean±SEM (the standard error of means) and examined with the Student t test. The rank data was analyzed by Spearman correlation tests. Non-parametric parameters were compared by the Mann-Whitney U test. Kaplan-Meier survival curves were created and compared by the log-rank statistic. The significance level of the analysis was set to a p value of less than 0.05. 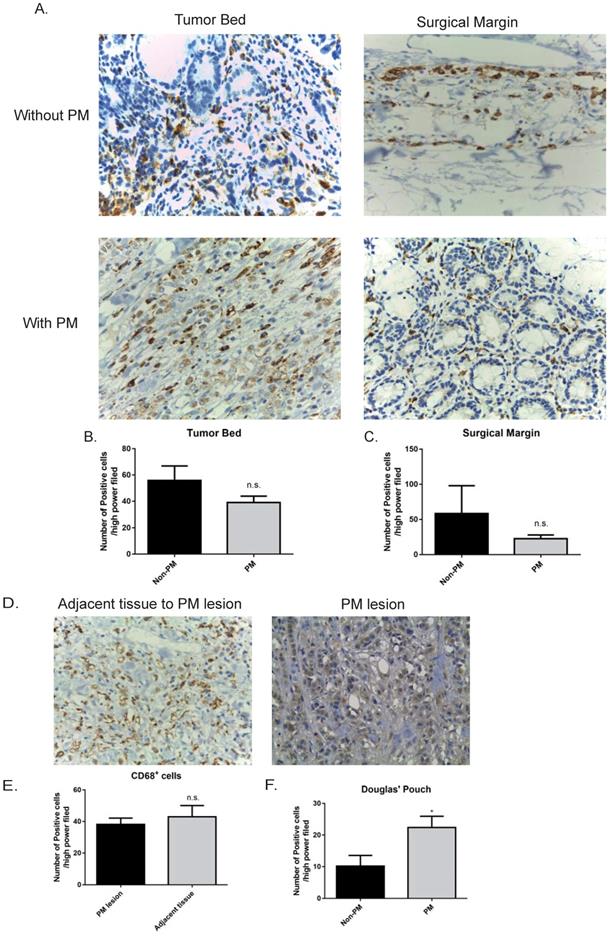 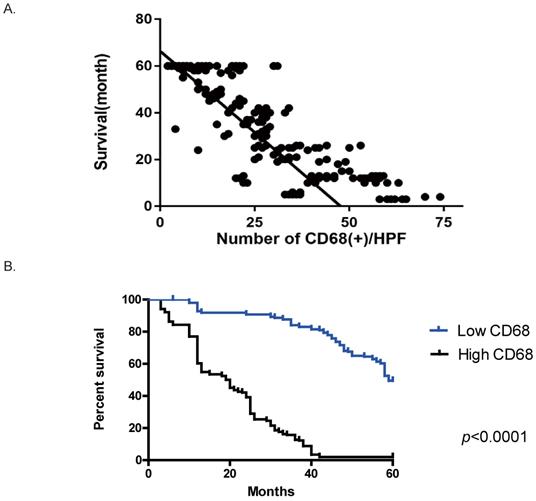 We also observed the correlation between the abundance of macrophages and the prognosis of GC patients. In our cohort, no correlation was seen between the number of macrophage in the primary sites or surgical margins and the outcome (data not shown). However, with respect to the correlation between CD68+ macrophages in the Pouch of Douglas and metastasis, the number of CD68+ cells on peritoneum was correlated with a poor prognosis. Patients harboring a higher number of CD68+ cells on peritoneum had a worse outcome (Figure 2 A, r= -0.84, 95% confidence interval (CI) [-0.8666, -0.8085], R2=0.7055, p<0.0001). We divided our cohort into two groups according to the median of CD68+ cells/HPF in the Pouch of Douglas across the entire cohort (24.95/HPF), which were the low CD68 group (<25/HPF) and the high CD68 group (≥25/HPF). As shown in Figure 2 B, the high CD68 group had a shorter postoperative overall survival compared to the low CD68 group (p=0.0112). These results suggest that the number of CD68+ cells on GC patients' peritoneum is a predictive parameter for the overall survival. 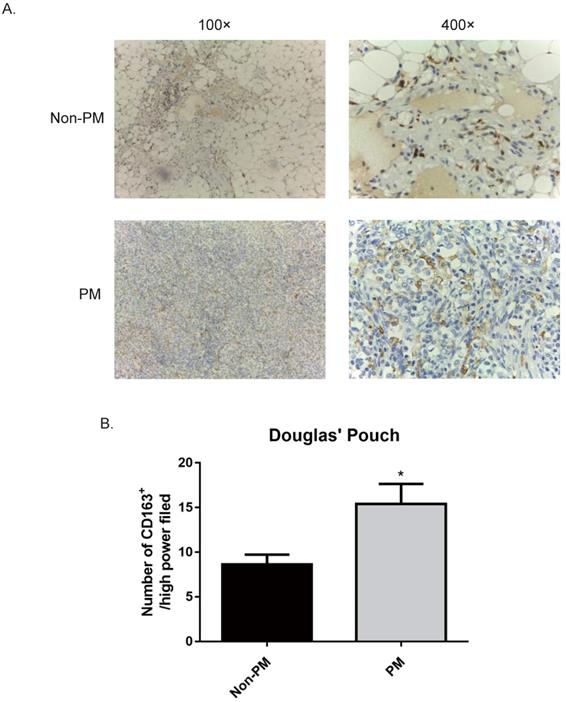 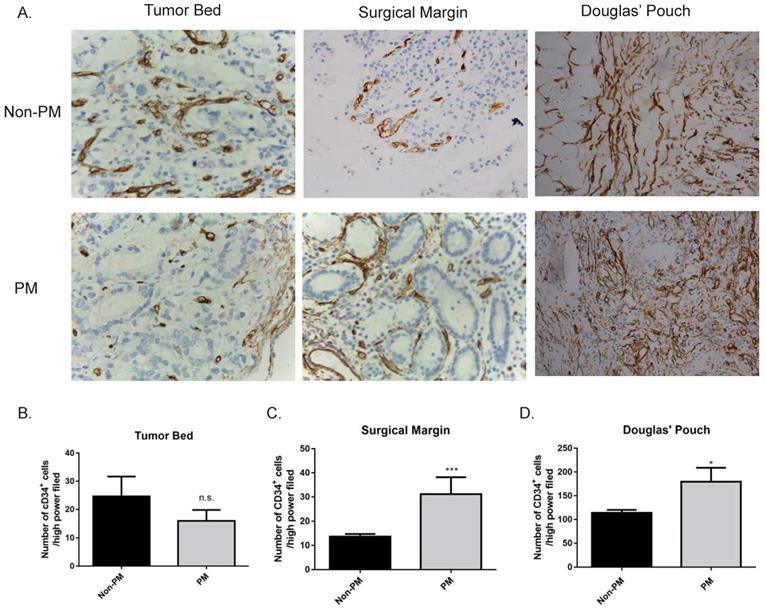 Since the relationship between cancer and inflammation has been described by Virchow in the 19th century, an increasing number of studies have been performed for the functions of inflammation in cancer development [31, 32]. However, less is known about the inflammation caused by cancer—cancer-related inflammation [13, 15]. The cancer is composed of two parts—tumor cells and stromal cells. Tumor cells have gained so much attention and interest from medical doctors and researchers, but recently accumulating evidence demonstrates that cancer-related inflammation supports the development of cancer in various ways. Many components of cancer-related inflammation, including cytokines, chemokines, growth factors and immune cells, play supportive roles to cancer cells. Cancer cells can also recruit leukocytes to the tumor microenvironment in a selective way to choose suitable types of leukocytes for tumor growth. Thus, tumor cells and immune cells built an environment for a mutual interest. 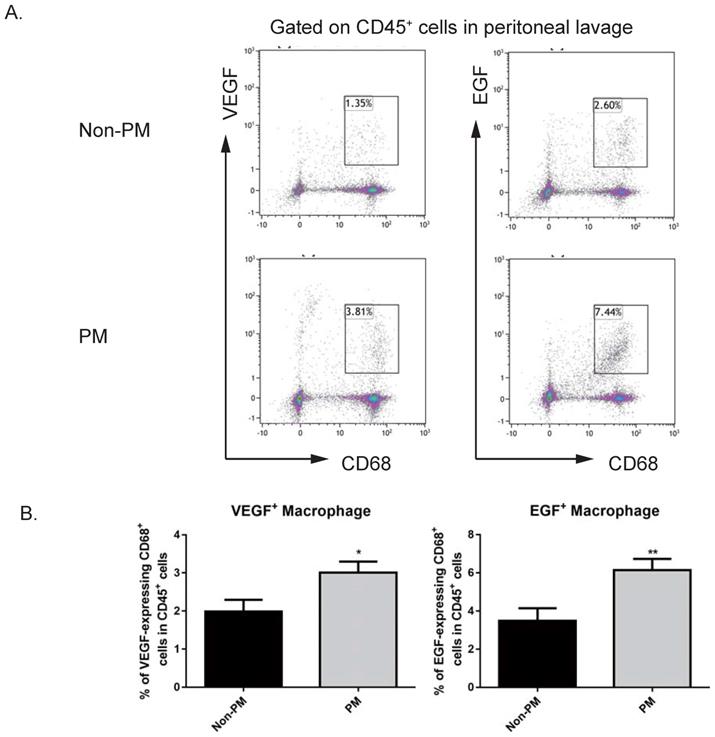 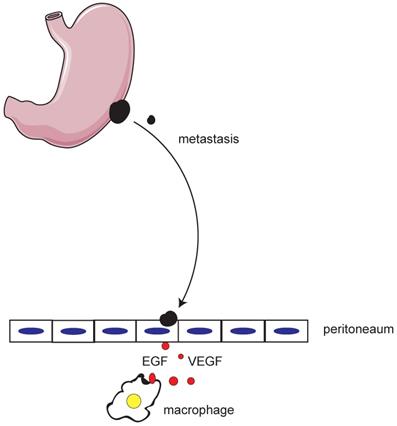 This study was supported by Funding of Department of Education of Heilongjiang Province (to Dr. H. Song, Funding Number: 12541458). The funders did not have any roles in the experimental design, data collection and analysis, decision to publish, or manuscript preparation.

Dr. H. Song was supported by Funding of Department of Education of Heilongjiang Province. Other authors declare no conflict of interest.

14. Vannucci L. Stroma as an Active Player in the Development of the Tumor Microenvironment. Cancer Microenviron. 2015;8:159-66