Surgery combined with chemotherapy/radiotherapy is recommended for early stage small cell lung cancer (SCLC); however, the role of surgery in the multimodality treatment of advanced disease remains controversial. The clinical data of patients between 2000 and 2015 were obtained from the Surveillance, Epidemiology, and End Results database. The surgery group included 998 patients with stage IIB-IIIC. A matched non-surgery group (n = 2994) was generated by propensity score matching. The Kaplan-Meier method and log-rank tests were used for survival analyses. Univariate and multivariate analyses were used to identify significant prognostic factors. After matching, there were no significant differences between the two groups in race, age, sex, T classification, N classification, TNM stage, marital status, primary sites, and origin record NAACCR Hispanic Identification Algorithm (NHIA). The surgery group showed better overall survival and cancer-specific survival than the non-surgery group. Univariate and multivariate analyses showed that therapy methods, age, sex, T classification, and N classification were independent prognostic predictors for stage IIB-IIIC SCLC (all P < 0.05). Stratified analyses showed that survival outcomes favored surgery in any age groups, men and women, any T classification except T3, and N0-2 but not N3 compared with non-surgical treatment. The survival differences favored surgery in stage IIB and IIIA SCLC, although they were not significant in stage IIB and IIIC SCLC. Therefore, surgery was associated with improved survival in stage IIB and IIIA SCLC, but not in stage IIIB and IIIC SCLC.

Small cell lung cancer (SCLC) accounts for approximately 15% of new lung cancer cases annually. It is a virulent, rapidly growing, early metastasizing, and highly invasive cancer with a 5-year survival rate of < 7% 1, 2. Most of patients with SCLC already have regional or distant spread at diagnosis 3. Despite recent advances in the treatment of SCLC, patient survival only shows a slight improvement 4.

Currently, chemotherapy and radiotherapy are the standard treatments for patients with SCLC, and they have provided patients a chance to prolong their survival 5. Surgical treatment is only considered to be limited as an option for early stage SCLC according to recent consensus. The NCCN guidelines version 2 (2018) suggest that patients with SCLC at a stage higher than T1-2 with N0 do not benefit from surgery 6. However, reports show that surgery can significantly improve survival outcomes in SCLC patients and should be considered in the management of SCLC at stages higher than T1-2 with N0 7.

The data of patients with SCLC are shown in Figure 1A. Briefly, patients with SCLC (ICD-O-3 8041/3, 8043/3, 8044/3, 8045/3) were recruited between 2000 and 2015. The labeled primary sites were limited to C34.1-upper lobe, lung, C34.2-middle lobe, lung, C34.3-lower lobe, lung, and C34.8-Overlapping lesion of lung, C34.9-lung, NOS. The old version of tumor TNM stage was converted to the new AJCC TNM stage manually. The inclusion criteria were as follows: (1) Patients with stage IIB-IIIC disease; and (2) patients treated with chemotherapy or radiotherapy or both. The exclusion criteria were as follows: (1) Patients diagnosed with stage I, IIA, and IV SCLC; (2) patients who did not receive chemotherapy/radiotherapy or surgery; (3) patients who underwent surgical treatment alone. After selection, all patients enrolled in the study were divided into a surgery group and a non-surgery (chemotherapy/radiotherapy) group according to the mode of therapy.

Statistical analyses were performed using IBM SPSS Statistics 24.0 (IBM, Inc., Armonk, NY) and R version 3.5.1 (R Foundation for Statistical Computing, Vienna, Austria). Before and after matching, the characteristics between the two groups were compared using chi-square tests. A standardized difference less than 10% was acceptable to evaluate the balance of covariates before and after matching. The overall survival (OS) and the cause-specific survival (CSS) were estimated by the Kaplan-Meier method, and log-rank tests were used to analyze differences between curves. Univariate and multivariate Cox regression analyses were used to identify significant prognostic factors. Two-sided P values < 0.05 were considered statistically significant.

Ethics approval was exempted by the Ethics Committee of Zhongshan Hospital of Fudan University (Shanghai, China), as the SEER is a publicly available database, and data extracted from SEER were identified as nonhuman study.

There were 85462 patients with SCLC in the SEER database between 2000 and 2015. After rigorous selection, 998 patients with stage IIB-IIIC SCLC who underwent surgery combined with chemotherapy or radiotherapy or both were included in the surgery group, and 17467 patients who only received chemotherapy or radiotherapy or both were included in the non-surgery group. After matching based on propensity scores, 2994 patients were selected and enrolled in the non-surgery group (Figure 1A). As shown in Table 1, compared to the patients who received non-surgical treatment, the patients who received surgery were more likely to be white and married, were more easily to develop tumors located in lower lobe, and had a higher tumor T classification, N classification and TNM stage (all P < 0.05). After matching, there were no significant differences between the two groups in terms of age, sex, race, origin record NHIA, marital status, primary sites, TNM stage, T classification, and N classification (all P > 0.05; Figure 1B).

The 1, 2, and 3-year OS rates and CSS rates of patents with stage IIB-IIIC SCLC in the two groups were shown in Table 2. Generally, patients in the surgery group had better OS and CSS rates than those in the non-surgery group (P < 0.001; Figure 2A and B). Competing risk model analysis showed that the patients who received non-surgical treatment had a higher risk of cause-specific death from SCLC (P < 0.001), and there was no significant difference in the probabilities of other causes of death (P = 0.777; Figure 2C).

Patient characteristics before and after matching

Flow chart of the selection of cases and controls (A); Standardized differences of baseline variables before and after propensity score matching (B). 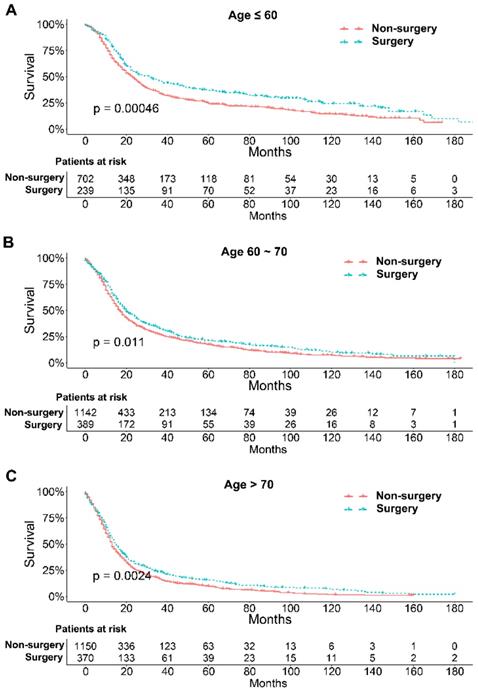 Previously, a large of studies including prospective and retrospective analyses focused on the treatment for NSCLC 8-15, because NSCLC accounted for 85% of lung cancer cases 16. It has been reported that surgery combined with chemotherapy/radiotherapy may improve the survival of the patients with advanced NSCLC 9, 15. For SCLC, the standard of care is chemotherapy and radiotherapy, even for limited disease 17. The role of surgery in the treatment of advanced SCLC is controversy 18-20. Several studies examined the role of surgery in the SCLC patients 21-23, but few studies solved the problem of potential selection biases in the analyses. In the present study, we used the PSM method to eliminate the selection bias by matching factors between the two groups, including age, sex, race, primary sites, T classification, N classification, TNM stage, marital status at the time of diagnosis, and origin record NIHA, and investigated the role of surgery in the chemotherapy/radiotherapy-based multimodality treatment of patients with stage IIB-IIIC SCLC. To our knowledge, it is the first time to use PSM method to eliminate the patient selection bias among the baseline variables of the two groups to investigate the role of surgery in the treatment for advanced SCLC. In addition, we used the competing risk model to distinguish cancer-specific death from death from other causes. No significant difference was found in the probabilities of other causes of death. These processes resulted in a more accurate comparison of survival outcomes between the two groups.

SCLC is a disease with a grave prognosis. In the present study, the 1, 2, and 3-year OS rates of patients with stage IIB-IIIC SCLC were 62.4%, 36.7%%, and 26.7%, respectively, which was consistent with the results of the study by Eberhardt et al. 24. Although surgery offers lung cancer patients the best chance of long-term survival, surgery alone is not sufficient, even for early stage SCLC. Analysis of the National Cancer DataBase indicated that patients with early SCLC who received surgery alone had a lower survival than those who received surgery combined with chemotherapy 25. A retrospective review by Szczesny et al. showed that surgery alone was associated with lower 5-year survival rates than a multidisciplinary approach for very limited disease 20. Furthermore, reports show that chemotherapy/radiotherapy may be effective and could decrease the risk of recurrence in SCLC, and could provide a survival benefit to patients 26, 27. However, chemotherapy/radiotherapy alone is associated with poor prognosis when compared with surgery with adjuvant therapy for early stage SCLC 28, 29. These results support an increased role of surgery in the multimodality treatment of SCLC, and the combination of surgery with chemotherapy/radiotherapy could be beneficial in patients with early stage SCLC. Increasing evidence indicates that multimodality treatment including surgical resection is associated with better survival than chemotherapy/radiotherapy alone 18, 30, 31. The treatment, namely surgery combined with adjuvant chemotherapy/radiotherapy, has a 5-year survival of approximately 40% -70% for limited-stage SCLC patients 26, 32.

In the past, surgery was only recommended for early stage SCLC 18, as it has little beneficial effects in patients with advanced disease. However, studies favor surgical intervention in patients with stage III SCLC. Shepherd et al. 33 showed that stage II (T1N1, T2N1) and stage III (any T3 or T1-2N2) SCLC patients who underwent surgery and adjuvant chemotherapy had a median survival of 72 weeks and 65 weeks, and projected 5-year survival rates of 24.5% and 24%, respectively. Eberhardt et al. 34 showed that the addition of surgery to multimodality treatment provided significant long-term survival, even in locally advanced patients with stage IIB/IIIA SCLC. Tsuchiya et al. 32 and Combs et al. 23 also reported comparable results. In the present study, OS and CSS were better in patients with stage IIB-IIIC SCLC in the surgery group than in those in non-surgery group, indicating that the inclusion of surgery in the multimodality treatment is beneficial for longer survival.

The present study had several limitations. First, the information available in the SEER database regarding chemotherapy and radiotherapy for SCLC was limited, and we were unable to obtain specific information regarding chemotherapy drugs, radiotherapy dose, and the treatment course. Second, the tumor differentiation in most cases in the non-surgery group was unknown, and the impact of tumor differentiation on survival outcomes could not be analyzed. Third, certain patients were excluded because of incomplete or inaccurate clinical information, which may lead to potential selection bias.

The present study demonstrated that the combination of surgery with chemotherapy/radiotherapy was associated with better survival outcomes than conventional chemotherapy/radiotherapy alone in stage IIB and IIIA SCLC, but not in stage IIIB and IIIC SCLC. However, surgical resection was not associated with improved survival outcomes in the management of T3 classification and N3 classification.

We thank International Science Editing (http://www.internationalscienceediting.com) for editing this manuscript.

22. Weksler B, Nason KS, Shende M, Landreneau RJ, Pennathur A. Surgical resection should be considered for stage I and II small cell carcinoma of the lung. Ann Thorac Surg. 2012;94:889-93