Methods: We analyzed 216 patients with mPCa who underwent ADT between January 2006 and December 2015 at the First Affiliated Hospital of Fujian Medical University. Univariate and multivariate Cox regression analysis were used to explore the risk factors for progression to CRPC. Kaplan-Meier analysis and log-rank test were used to evaluate the difference in progression-free survival (PFS).

Recently, prostate cancer (PCa) has become one of the most common malignant tumors in western countries [1-3]. The incidence of PCa in China has increased in recent years [4]. Patients with bone or visceral metastasis can be diagnosed with metastatic PCa (mPCa) [5].

Patients with mPCa usually have no opportunity to undergo radical treatment. Instead, androgen deprivation therapy (ADT) works as the first-line treatment to prevent progression to castration-resistant PCa (CRPC)[6]. However, patients who undergo ADT inevitably show progression to CRPC [7]. Patients with CRPC have poor prognosis and unsatisfactory therapeutic effects.

We retrospectively reviewed the clinical data of mPCa patients between January 2006 and December 2015. The regiments of patients received ADT in this study were luteinizing hormone-releasing hormone agonists (LHRH-A) accompanied with an anti-androgen until progression to CRPC or at the end of follow-up time. The inclusion criteria were as follows: patients diagnosed with pathologically confirmed PCa and have positive findings of bone or visceral metastasis. The exclusion criteria were as follows: patients with other cancer, treated with 5α-reductase inhibitors within 6 months, received chemotherapy or radiotherapy during the follow-up time, or without whole course intervention of ADT were excluded in this study. Age, body mass index, prostate-specific antigen (PSA) baseline level, Gleason score and Gleason grade group were recorded in a database, as well as the level of alkaline phosphatase, lactate dehydrogenase and hemoglobin. Gleason score was subject to pathological diagnosis by prostate biopsy. Patients were divided into 5 groups according to the Gleason grade group system devised in 2014 by the International Society of Urological Pathology [8]: Grade group 1, Gleason score ≤6; Grade group 2, Gleason score 3+4=7; Grade group 3, Gleason score 4+3=7; Grade group 4, Gleason score 8; and grade group 5, Gleason score ≥9. Bone and visceral metastasis were diagnosed by bone emission computed tomography, magnetic resonance imaging of the pelvis, and computed tomography of the chest and abdomen. All patients received ADT regularly.

The duration of response to ADT in each patient was determined by the detection of serum PSA levels every 3 months. PSA nadir (nPSA) and time to PSA nadir (TTN) were recorded during follow-up. nPSA was classified as ≤0.2 ng/ml or >0.2 ng/ml, and TTN as <6 months or ≥6 months, based on previously published studies [9-11]. The progression to CRPC was defined as castrate serum testosterone <50 ng/dl or 1.7 nmol/l, in addition to either biochemical progression (3 consecutive rises in PSA 1 week apart, resulting in 50% increases over the nadir, with PSA >2 ng/ml), or radiological progression, based on the 2017 European Association of Urology guidelines [12, 13]. 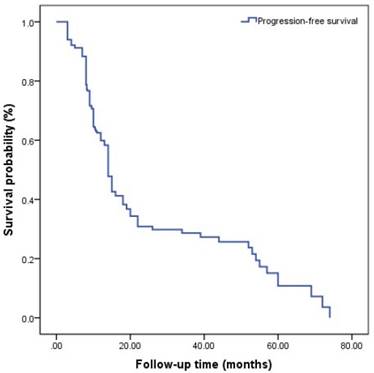 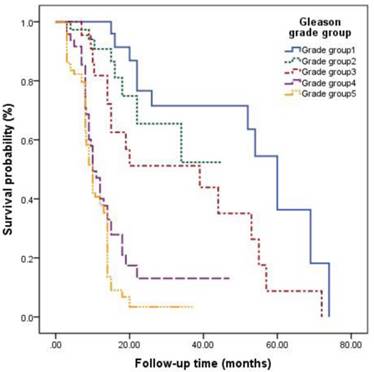 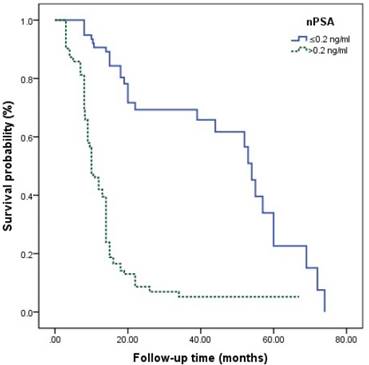 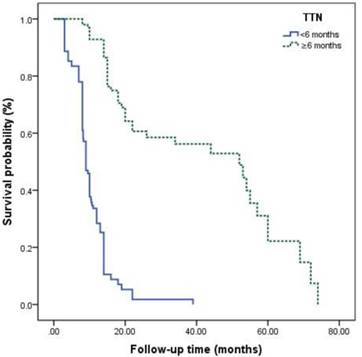 For PCa, PSA is a widely used serological index in diagnosis, evaluation of therapeutic effect and prediction of prognosis [17-19]. Nayyar et al.[11] reported that higher PSA baseline level was associated with poorer therapeutic effect of ADT and shorter time to progression to CRCP. However, Yamamoto et al. [20] demonstrated that patients with PSA baseline level <10 ng/ml had poorer therapeutic effect than those with ≥10 ng/ml. Some previous studies also showed that PSA baseline level cannot work as a predictor for prognosis, which was supported by the present study [21, 22]. Recently, it was shown that nPSA and TTN seem to have better efficacy for prediction of prognosis than PSA baseline level has. Choueiri et al. [9] reported that TTN <6 months and nPSA >0.2 ng/ml predicted shorter overall survival in patients who had hormone-sensitive mPCa treated with ADT. A retrospective study about ADT for PCa or mPCa by Ji et al. [21] indicated that TTN ≤9 months and nPSA <0.03 ng/ml were significantly connected with an increased risk of progression to CRPC. Kuo et al. [23] reported a significant relationship between a longer time to PSA rise during the first off-treatment interval and a longer time to CRPC progression in patients treated with ADT. Besides, nPSA and TTN seem to work as predictors for prognosis in chemotherapy for CRPC [23]. It is generally considered that a rapid decline of PSA indicates a higher proportion of PCa cell death and, therefore, higher survival [24]. However, this is not consistent with what mentioned above. The underlying mechanisms are still unclear. It is possible that a rapid decrease of PSA might reflect down-regulation of PSA expression of hormone-sensitive PCa cells, which are regulated by androgens via the androgen receptor pathway [25]. Another possibility is that rapid removal of hormone-sensitive PCa cells might induce an environment that is conducive to the growth of CRPC cells [25]. Besides, a high nPSA means that many cancer cells develop into castration-resistant cells and survive ADT. Thus, more attention must be paid to patients with higher nPSA and shorter TTN for early identification of progression to CRPC.

Distant metastasis has been found in >80% of patients who died of PCa[2]. PCa usually tends to spread to axial bone rather than limb bone or viscera [26]. Rigaud et al. [26] reported that patients with axial bone metastasis have better survival than those with limb bone or visceral metastases. In addition, several studies have revealed that the presence of greater bone metastasis before ADT initiation results in earlier progression to CRPC [27].

The present study had several limitations. First, this was a retrospective analysis performed at a single institution, which restricts the application and generalization of our findings. We did not evaluate other biomarkers of androgen receptors because of technological limitations. Second, the univariate analysis revealed that limb bone metastasis, visceral metastasis and level of alkaline phosphatase might predict the progression to CRPC in patients with mPCa treated with ADT. However, multivariate analysis demonstrated opposite conclusions compared with univariate analysis. Third, multivariate analysis is more reliable than univariate analysis when considering the interaction among confounding factors. For instance, when compared to the studies of Rigaud [26] and Howard [27], patients included in this study have higher Gleason grade group, which possibly reduces the effects of bone metastasis and visceral metastasis towards the results. Finally, bias resulting from small sample size, relatively short follow-up time, and patient imposed selection are usually inevitable. Therefore, further study should be conducted to validate these conclusions.

In conclusion, this study demonstrated that higher Gleason grade group, higher nPSA, and shorter TTN were associated with higher risk of progression to CRPC in patients with mPCa. Further studies are needed to confirm these conclusions.

Patients with CRPC have poor prognosis and unsatisfactory therapeutic effects. This study demonstrated that Gleason grade group, nPSA and TTN were risk factors for progression to CRPC. Patients with higher Gleason grade group, higher nPSA and shorter TTN have shorter PFS and higher risk of progression to CRPC after ADT. Further studies are needed to confirm these conclusions.

All data generated or analyzed during this study are included in this published article.

This study was approved by the Ethics Committee of the First Affiliated Hospital of Fujian Medical University (Fuzhou, Fujian, China). All patients signed informed consent forms before they received ADT.