Background: The prognosis of pancreatic ductal adenocarcinoma (PDAC) remains poor. Open distal pancreatosplenectomy (ODPS) is prevalent in the patients of early PDAC located in pancreatic body or tail. However, the models for relapse or survival prediction in those patients are still limited. Postoperative neutrophil-to-lymphocyte rate (poNLR), a novel inflammation-based score, has been formulated to analyze the prognostic significance in PDAC patients with ODPS. Therefore, this study aims to generate a valuable prognostic nomogram for PDAC following ODPS.

Results: The optimal cut-off value of poNLR for assessing OS determined by X-tile program was 14.1. Higher poNLR was associated with higher postoperative neutrophil (poNeutrophil), lower postoperative lymphocyte (poLymphocyte), lower preoperative lymphocyte-to-monocyte rate (preLMR) and higher △NLR (postoperative-preoperative NLR). In the univariate and multivariate analysis, poNLR was identified as an independent prognostic indicator for OS and RFS (P=0.044 and 0.028, respectively) and patients with higher poNLR level were probable to have shorter OS and RFS. Compared with the TNM staging system of the AJCC 8th edition, the nomogram comprising of poNLR and AJCC 8th edition exhibited superior predictive accuracy for OS and RFS.

Conclusions: poNLR can be a proven, inexpensive and novel survival predictor of PDAC patients with ODPS. One more advanced and accurate predictive model will be achieved to assist in risk stratification via the incorporation of poNLR into nomograms.

Some evidences have verified the value of systematic inflammation response in predicting the progression of malignant cancers and survival of patients, which has received considerable interest owing to its simplicity, convenience and inexpensiveness3. Numerous studies have showed that the increased preoperative neutrophil-to-lymphocyte ratio (preNLR) owns a dominant prognostic value in several diseases, such as gastric, colorectal, hepatocellular, pancreatic, lung cancer and so on4-9 . In addition, amounts of studies have showed the prognostic value of preNLR in localized or advanced pancreatic cancer, and an elevated preNLR was significantly correlated to shorter survival or PDAC occurrence4, 10-12. The cut-off value of preNLR as previously literatures reported was around 2.0-5.04, 13, 14. However, few studies reported prognostic value of elevated NLR in ODPS patients. In particular, most studies focused on preNLR as a predictor of survival in PDAC, while no study assessed the correlation between postoperative neutrophil-to-lymphocyte ratio (poNLR) and prognosis after ODPS for PDAC. The poNLR may better reflect the prognosis-related systemic immune response and the stress suffering from surgery according to several recent reports15-18.

Taken together, we logically hypothesized that a novel inflammatory biomarker, poNLR, can predict the survival outcome after ODPS for PDAC. We dug into the connections between prognostic significance of poNLR and clinicopathological characteristics in PDAC undergoing ODPS to evaluate its values in prediction of overall survival (OS) and relapse free survival (RFS). Additionally, an innovative prognostic nomogram model incorporating poNLR and AJCC 8th staging system was formulated to predict the prognosis.

We retrospectively collected and analyzed 97 PDAC patients from March 2012 to March 2016 who underwent ODPS at Zhongshan Hospital, Fudan University. All the patients had received the optimal chemotherapy was provided by multiple disciplinary teams by synthesizing the patients' tumor burden, physical and financial condition; The inclusion and exclusion criteria were as follows: (1) patients who underwent ODPS and confirmed as PDAC by exactly pathological diagnosis, and without unknown origins or distant metastasis;(2) no preoperative anti-inflammatory or anti-cancer treatments; (3) no concurrence or history of other malignant cancers; (4) no evidence of preoperative infection, hematological or inflammatory diseases; (5) sufficient clinicopathological and follow-up data. The protocol of this study was approved by the Clinical Research Ethic Committee of Zhongshan Hospital, Fudan University and all informed consents were obtained.

Conventional clinicopathological parameters were examined within preoperative 3 days, while blood routine test and biochemical test were also examined within postoperative one day routinely, such as preoperative CA19-9 (preCA19-9), CEA (preCEA), monocyte (preMonocyte) and preoperative or postoperative neutrophil (preNeutrophil or poNeutrophil), lymphocyte (preLymphocyte or poLymphocyte), albumin (preALB or poALB), alanine aminotransferase (preALT or poALT), gamma-glutamyltransferase (preGGT or poGGT) and lactate dehydrogenase (preLDH or poLDH). The clinical tumor stage for each patient was evaluated by postoperative histopathological examination and clinical assessment in accordance with the AJCC 8th staging system. Data were obtained from hospital record system. The NLR was calculated by dividing the blood neutrophil counts by the blood lymphocyte counts and △NLR was calculated by subtracting preNLR from poNLR.

Postoperative follow-up schedules were carried out with all patients according to the NCCN Clinical Practice Guidelines, including physical, laboratory and radiological examinations. In detail, blood routine and biochemical tests, and tumor biomarkers were examined quarterly within first 2 years, biannually within next 3 years, and yearly thereafter. Patients routinely underwent enhanced abdominal computed tomography (CT) scans or magnetic resonance imaging (MRI) in every 6 months. In addition, all patients were followed up via telephone call and the last follow-up work was finished on December 30, 2016. The OS was defined as the period between surgery and December 2016 or death and the date of surgery to tumor relapse or December 2016 was considered as RFS.

According to whole criteria above, 97 patients with ODPS were finally collected. The detailed clinical and pathological characteristics were displayed in Table 1. Fifty-two males and forty-five females consisted of the gender distribution. The population's median age was 64 (ranging between 35 and 81) years. The median OS and RFS was 17 months (ranges, 6-78 months) and 10 months (ranges, 1-72 months), respectively. Furthermore, 1-, 2- and 3-year OS rates were 68.4%, 30.7% and 14.8% respectively, while 1- and 2-year RFS rates were 37.1% and 14.0% respectively. Among these patients, 29 patients suffered from well or moderate pathological differentiation, whereas 68 patients were observed in poor differentiation. From the AJCC 8th staging system, number of patients of I, II A, II B and III stage was 24, 31, 25 and 17 respectively.

Identification of the optimal cut-off value for poNLR

The median poNLR of the collected population was 13.8 (ranges: 1.8-31.9). Using X-tile program, a biostatistical tool, we further determined 14.1 as an optimal cut-off value of poNLR for survival analysis (Figure 1), as well as other inflammation-based scores displayed in Table 1, such as albumin-to-gamma glutamyltransferase ratio (AGR), lymphocyte-to-monocyte ratio (LMR), albumin-to-lactate dehydrogenase ratio (ALR) and △NLR. Thus, we divided the cohort into two groups in line accordance with the poNLR (poNLR>14.1 as a high-risk group and poNLR≤14.1 as a low-risk group).

Clinicopathological characteristics of patients with PDAC: univariate and multivariate analysis.

X-tile analysis of OS. The optimal cut-off value with dichotomies for poNLR was 14.1 (A, B, C). OS, overall survival; poNLR, postoperative neutrophil-to-lymphocyte rate.

Correlation between poNLR and clinicopathologic characteristics in PDAC with ODPS

Association of poNLR with OS and RFS for PDAC with ODPS

Correlation between poNLR and clinicopathological variables of patients with PDAC.

Calibration curves for probability of OS at 1, 2, 3 years (Figure 4A-4C) and RFS at 1, 2 years (Figure 4D-4E) after ODPS showed excellent consistency between nomogram-prediction and actual observation.

Discriminatory capabilities of nomogram and independent prognostic factors in patients with PDAC: C-indices in OS and RFS prediction.

Kaplan-Meier survival curves for OS and RFS of PDAC patients with ODPS according to poNLR levels. Patients of PDAC with poNLR more than 14.1 were inclined to significantly poorer OS (A) and RFS (B). The P-values were analyzed by the log-rank test. OS, overall survival; RFS, relapse free survival; PDAC, pancreatic ductal adenocarcinoma; ODPS, open distal pancreatosplenectomy; poNLR, postoperative neutrophil-to-lymphocyte rate. 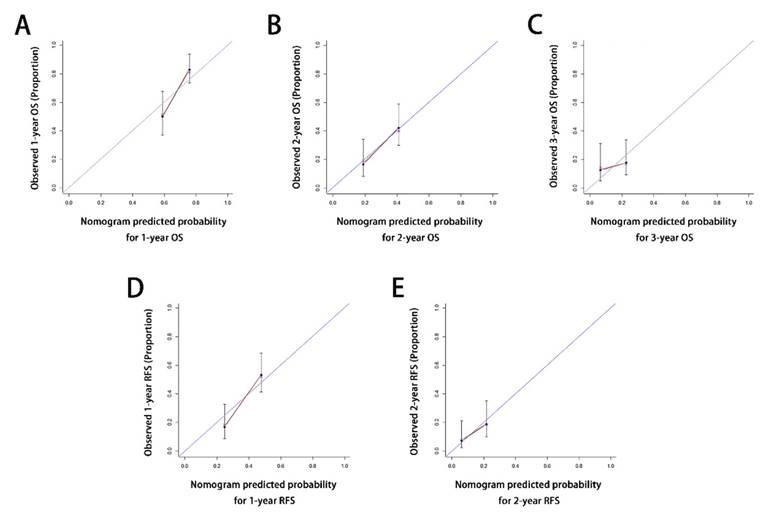 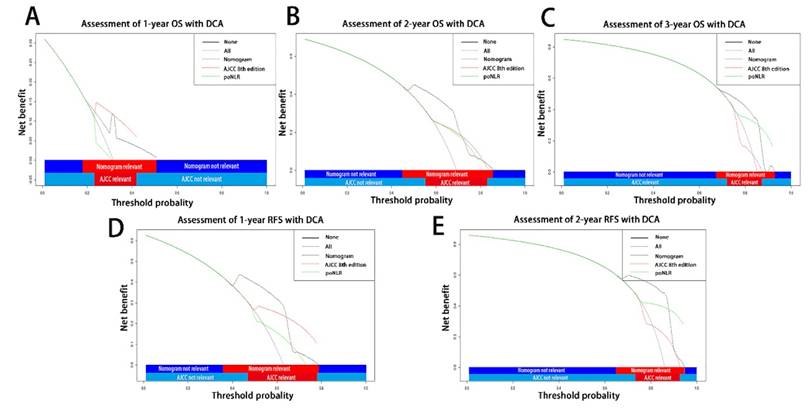 Among this study, patients of PDAC operated with ODPS were analyzed. To our knowledge, we formulated poNLR, a convenient and original inflammation-based score constituting neutrophil and lymphocyte counts, as a precise predictor in PDAC patients undergoing ODPS. In analysis with the clinicopathological characteristics, patients with higher poNLR (>14.1) had higher poNeutrophil counts as well as lower poLymphocyte counts. In addition, they also had correlations with △NLR and preLMR level. Next, significant associations were found between poNLR and OS or RFS according to univariate and multivariate analysis. Furthermore, nomograms containing poNLR and AJCC 8th staging system validated by calibrations and DCA manifested improved prediction power in contrast to AJCC 8th staging system alone.

The aforementioned results imply that the risk of cancer-related relapse or death increases after ODPS with the elevation in postoperative day one NLR. It is gradually accepted that there is a very strong link between systemic inflammation and development of PDAC21. The blood parameters reflect the anti-factor and promoting-factor of inflammatory response and immune response to the cancer16. Our previous study had investigated the changes of microenvironment in PDAC, which showed the prognosis-related changes of regulatory T cells and CD8+ T cells22. Our present research indicated that elevated poNLR was an independent predictive factor to the prognosis of PDAC undergoing ODPS. Balkwill F et al.23 believed that inflammation could drive cancer progression rather than suppress the tumorigenesis or metastasis. The active inflammation concluded as a bad prognosis to patients with cancers. It was proposed that tumor cells stimulated neutrophils by secreting interleukin-8, which dissolved extracellular matrix to help tumor cells traverse across the vasculature and spread to a wider space24. Besides that, neutrophils could promote tumor growth by inflammatory markers like vascular endothelial growth factor (VEGF), proteases, NF-kB25. Just as the membrane transports of serum electrolytes, when the serum concentration reached to an aberrant level, the intrinsic balance would disrupt. So postoperative day one higher neutrophil counts may immediately change the latent microenvironment of cancer, which contributed to the recurrence and progression26.

In ODPS procedure, splenectomy and the surgical trauma contributing to the alternation of peripheral blood parameters should be taken into consideration. Exstirpation of the spleen makes unignorable changes in immune status. The neutrophils' proportion and absolute counts increase, whereas the lymphocytes' proportion and absolute counts are not significantly changing or even decrease27, 28. All these may lead to an increasing ratio of the poNLR. Simultaneously, we determined the optimal cut-off value of poNLR as 14.1. Although Stotz M et al.29 reported that preNLR≥5 was selected as threshold for distinguish the high/low-risk group in pancreatic cancer, our study failed in obtaining the optimal cut-off value of preNLR and △NLR could not be an independent predictor through univariate and multivariate analysis. In addition, comparing with preNLR which may indicate tumor progress, the poNLR was appropriate to provide more precise systemic condition of post-operation like connective tissue disorders, frequently physical examination or mental stress16. We also found that preLMR had a significantly correlation with poNLR, which was consistent with the previous studies that verified high preMonocyte counts and low preLMR level could predict a poor prognosis in PDAC30. Combining with our study, we speculated that there were potential relationships between monocytes and neutrophils in the PDAC microenvironment31.

There were still several limitations in our study. Firstly, this remained as a single-center retrospective study essentially, potential bails must be considered, and a multicenter and large-scale validation group was needed. Secondly, patients undergoing ODPS procedure may have differential surgical trauma because of different physical conditions and surgeons' operations.

In conclusion, this study verified the links between high poNLR and poor prognosis. The poNLR, deriving from inexpensive and easy-accessible clinical routine blood tests, could be a quite effective predictor for PDAC with ODPS. Moreover, the established nomograms integrating poNLR and AJCC 8th staging system provided higher predictive accuracy. However, because of the limitations, further studies were warranted to authenticate our findings.

The abstract of this paper was presented as a poster presentation at the Pancreas 2018 Conference in Johns Hopkins Hospital, Baltimore, MD, USA. The poster's abstract was published in “Poster Abstracts” in Annals of Pancreatic Cancer (DOI:10.21037/apc.2018.AB069).

This study was granted by Shanghai Pujiang Program (No.16PJD013) and Science and Technology Commission of Shanghai Municipality (No.11JC1402502).

All data used and analyzed in this study is available from the correspondence upon reasonable request.

Ethical approval and consent to participate

The protocol of this study was approved by the Clinical Research Ethic Committee of Zhongshan Hospital, Fudan University. All informed consents were obtained from patients.