Background: Our previous studies showed that tetraspanin CD151 was implicated in the progression of hepatocellular carcinoma (HCC), mainly depending on the formation of functional complexes with molecular partners, including Mortalin. In this study, we investigate the role of mortalin in CD151-depedent progression of HCCs.

Results: Expression of Mortalin in HCC cells was positive related to their metastatic ability and its tendency was in line with the expression of CD151. Immunofluorescent staining showed that Mortalin was located in cytoplasm, while positive staining for CD151 was observed in cytoplasm and membrane of HCC cells. co-IP revealed that Mortalin formed a complex with CD151. Down-regulation of Mortalin induced a moderate decreased CD151 protein, but not CD151 mRNA, while inhibition of CD151 did not influence the expression of Mortalin at the level of both protein and mRNA. Interference of Mortalin significantly inhibited the invasion and migration of HCC cells with high CD151 expression and partially restored the invasion and migration of HCC cells induced by CD151 over-expression. Clinically, high Mortalin expression correlated with malignant phenotype of HCC, such as microvascular invasion (p=0.017) and tumor diameter (p=0.001). HCC patients expressing high Mortalin were tend to have higher expression of CD151. HCC patients expressing high level of CD151 showed the poorer prognosis in a Mortalin-dependent manner.

Conclusions: Mortalin maybe stabilize of the structure of CD151-dependent tetraspanin-enriched microdomains and implicate in the progression of HCC.

As one of the most important member of the transmembrane 4 superfamily (TM4SF), it is well documented that tetraspanin CD151 is expressed in a wide range of normal cells such as endothelial cells and platelets, and involves in several physiological processes, such cell adhesion, motility, activation and proliferation [1]. Recent evidences have recorded that CD151 frequently overexpresses in malignant tumor tissues, including hepatocellular carcinoma (HCC) [2], gallbladder carcinoma [3], breast cancer [4] and ovarian cancer [5], and acts as a “driver” in tumor progression through formation of tetraspanin CD151-enriched microdomains [2]. Moreover, it is crucial for the function of CD151 to keep the structural stability of tetraspanin-enriched microdomains (TEM) [6]. Our serial studies showed that CD151 involved in several pathological processes, including invasive ability, tumor neoangiogenesis and epithelial-mesenchymal transition (EMT), and then accelerated the invasion and metastasis in HCC [2, 7, 8]. Based on the combination co-immunoprecipitation (Co-IP) with two-dimensional liquid chromatography coupled with tandem mass spectrometry (2D-LC-MS/MS), our results revealed that CD151 played the crucial role in the progression of HCC through formation of tetraspanin CD151 network with molecular partners, such as Mortalin, integrins α6β1 and c-Met [9]. Moreover, the role of CD151 was influenced by its partner, and disassociation of tetraspanin CD151/integrins α6β1 using targeted monoclonal antibody (generated in our group) could inhibit the mobility and invasion of HCC cells in vitro [10, 11]. Therefore, to explore the mechanism that keeps the structural stability of tetraspanin CD151 network is of significance for further disclosing the role of CD151 in HCC cells.

HCC is one of the most malignancies and ranks as the third most common cause of cancer-related mortality in the world [12, 13]. The dismal outcome mainly contributes to highly metastatic ability of HCC cells [14]. Therefore, it is considerable significance to disclose the role and molecular mechanism of key gene in the progression of HCC. Mortalin (also named as HSPA9, mthsp70, PBP74, Grp75) is a highly conserved molecular chaperone in the heat shock protein (HSP) 70 family [15]. Mortalin is expressed in all cell types and tissues and performs cytoprotective functions by unfolding of proteins outside mitochondria and unidirectional translocation across mitochondrial membranes, and completes import by acting as an ATP-driven motor. Its function is induced by stress stimulus, such as ionizing radiation, glucose deprivation, calcium ionophore, ozone and hyperthyroidism [16]. Recent studies reported that many of the human transformed cells and tumor cells including HCCs, had a high level of Mortalin expression [17]. Overexpression of Mortalin was inclined to support the malignancy of carcinoma cells. However, the role and mechanism of Mortalin in HCC remain largely elusive.

The protein interaction between Mortalin and CD151 was investigated in HCCLM3 cells using co-immunoprecipitation as described in our previous study [11]. The primary antibodies rabbit anti-human Mortalin monocolonal antibody (Cell Signaling Technology) and mouse anti-human CD151 monoclonal antibody (produced by our team) were used at 1:1000 dilutions. IgG was used as control.

187 cases of HCC tumor specimens were collected as previously described [2]. Detailed clinicopathological characteristics were listed in Table 1. Follow up procedures were consistent with our previous study [8].

TMA was constructed as described previously [2, 19]. The monoclonal mouse anti-human CD151 (1:200, established by our team) and rabbit anti-human Mortalin antibody (1:100, Cell Signaling Technology) antibodies were used to detect the expression of CD151 and Mortalin, respectively, based on a two-step protocol as previously described [8]. The density of positive staining of CD151 and Mortalin was measured as described elsewhere [8, 20].

The immunofluorescence was performed according to our previous study [2].

Statistical analysis was done with SPSS 16.0 software (SPSS, Chicago, IL). Student's t test was used for comparisons between groups. Categorical data were analyzed by the chi-square tests. Kaplan-Meier method and the log-rank test were used to assay the survival rates. p<0.05 was set as significant difference.

Mortalin forms a complex with CD151 in HCC cells

Here, we further investigated the implication of the CD151/Mortalin expression in a clinical setting including 187 cases of HCCs. After identification of primary HCC using hematoxylin-eosin staining (Figure 3A), we stained for CD151 and Mortalin in tissue microarray (TMA) slides using immunohistochemistry. Immunoreactivity of CD151 protein was located on the cell membranes and its intensity in tumor tissues was stronger than that in paratumoral tissues (Figure 3B). Positive Mortalin was expressed in the cytoplasm in a diffuse or granular pattern and its intensity in tumor samples was much stronger than that in paratumoral samples (Figure 3C). Next, we classified the whole cohort of patients into Mortalinhigh and Mortalinlow subgroup according to Mortalin expression and analyzed the relationship between Mortalin expression and clinical characteristics. Our results revealed that expression of Mortalin was positively correlated with microvascular invasion (p=0.017) and tumor diameter (p=0.001). However, other clinical characteristics, including age, sex, serum alpha fetoprotein, Child-Pugh score, tumor number, tumor capsulation and differentiation were not directly related to the expression of Mortalin. As described in our previous study, high level of CD151 was significantly related to tumor size (>5cm) (p=0.007) and vascular invasion (p=0.003) (Table 1).

Mortalin formed a complex with CD151 in HCCs. A. Co-IP assay showed Mortalin formed a complex with CD151 in HCC cells. B. Immunofluorescence showed colocalization of CD151 and Mortalin in HCCLM3 cells (original magnification, ×400). C. Inhibition of Mortalin in HCC cells induced moderately decreased expression of CD151 protein, rather than CD151 mRNA. Downregulation of CD151 did not influence in the expression of Mortalin at the level of protein and mRNA. 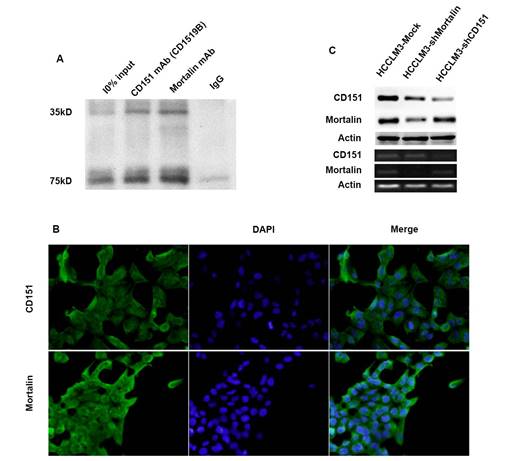 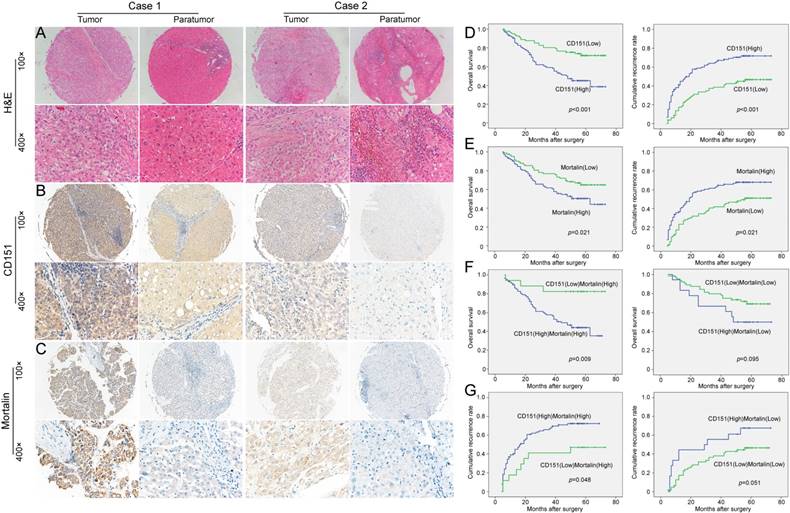 Univariate and multivariate analyses of factors associated with overall survival.

Then, we investigated the clinical implication of Mortalin/CD151 in the prognosis of HCC patients. In line with our previous results, present study also showed that CD151 expression was inversely related to the poor prognosis of HCC (Figure 3D). The OS rate of the Mortalinlow group was higher than those in the Mortalinhigh group (66.3% versus 51%). The cumulative recurrence rates of the Mortalinhigh group was significantly higher than that of the low level of Mortalin group (66.3% versus 49.4%, Figure 3E). Given the role of Mortalin in the stability of CD151 protein, we investigated the clinical implication of CD151 expression in the subgroup with different level of Mortalin. Interestingly, among Mortalinhigh subgroup of HCC patients, HCC patients with CD151high had shorter OS and higher cumulative recurrence rates than those with CD151low (Figure 3F and G). However, in Mortalinlow subgroup of HCC patients, CD151 expression did not exert on the prognosis (Figure 3F and G). These data also support the notion that Mortalin probably prevent from degradation of CD151 protein and involve in the progression of HCCs. A Cox proportional hazards model showed CD151 was an independent prognostic indicator for OS (p=0.011) and cumulative recurrence (p=0.002) (Table 2 and 3). While Mortalin was an independent prognostic indicator for cumulative recurrence (p=0.046) (Table 3). When CD151/Mortalin was adopted as a covariate, we found that CD151/Mortalin was also an independent prognostic predictor for cumulative recurrence (p=0.021) (Table 3).

In present study, our results revealed that high metastatic HCC cells tend to express high level of Mortalin. Interference of Mortalin significantly inhibited the invasion and migration of HCC cells. Clinically, HCC patients with Mortalin overexpression had poor prognosis. Therefore, we conclude that Mortalin does play an important role in in the progression of HCC.

A more interesting result from our study is that Mortalin could form a complex with CD151 and prevent from destabilization of CD151-depedent TEM and involve in the progression of HCC. TEM was considered as a function unit for tetraspanin family, and its stability is a requisite for the role of tetraspanin CD151 related to the invasion and metastasis in malignant tumors, including HCC [2]. In our study, high metastatic HCC cells express high level of Mortalin and CD151. Mortalin formed a complex with CD151 in HCC cells. Importantly, down-regulation of Mortalin induced a moderate decreased CD151 protein, but not CD151 mRNA, while inhibition of CD151 did not influence the expression of Mortalin. Moreover, upregulation of CD151 expression in HCC cells partially restored the ability of invasion and migration of HCC cells induced by interference of Mortalin. More importantly, HCC patients with CD151 overexpression had poor prognosis, to a large extent, depending on high Mortalin expression in tumor tissues. These data support our notion that Mortalin stabilize CD151-depedent TEM and involve in the progression of HCC. Mortalin exists in multiple subcellular sites of cell, including the mitochondrion, plasma membrane, endoplasmic reticulum, cytosol, and nucleus. It may serve as safeguards to maintain homeostasis and integrity of protein interactions and play a vital role in multiple processes of cell, such as stress response, intracellular trafficking, cell proliferation, and differentiation [21]. Recent studies have focused on the role of Mortalin in carcinogenesis and tumor progression. Mortalin could efficiently protect cancer cells from endogenous and exogenous oxidative stress [22]. Mortalin also inactivated tumor suppressor protein p53 functions and activated telomerase and heterogeneous ribonucleoprotein K (hnRNP-K) proteins, thus promoting carcinogenesis and tumor metastasis [23]. Starenki D et al [24] reported that mortalin was upregulated in human medullary thyroid carcinoma (MTC) tissues and its depletion robustly induces cell death and growth arrest by inducing transient extracellular signal-regulated kinase (MEK/ERK) activation and altering mitochondrial bioenergetics. Chen J et al [17] also found that the overexpression of Mortalin was correlated with the metastatic phenotype of HCC cells and promoted the progression by induction of the EMT. In our serial studies, CD151 was validated as a key gene related to the invasiveness and metastasis of HCC. CD151 could form a complex with integrin α6β1 and c-Met and involved in several pathological processes, such invasiveness, neoangiogenesis and EMT [2, 8]. The function of CD151 depends on the stability of TEM. Our study also confirmed that CD151 antibody targeting the CD151-integrin α6β1 binding domain could disassociate the TEM and inhibit the function of CD151 [9]. Therefore, as one of the molecular chaperones of CD151, Mortalin efficiently stabilized the CD151-depended TEM. Certainly, our study has some limitation as well. For example, the binding site of CD151/Mortalin need to be uncovered.