Background: This meta-analysis aimed to explore if immunotherapy or chemotherapy alone or in combination is a better first line treatment strategy for advanced non-small cell lung cancer (NSCLC) patients.

Conclusions: Our meta-analysis showed the superiority of combination therapy over monotherapy with chemotherapeutic agents in terms of tumor response, and long-term survival, but with an increased the 3 - 5 grade toxicity. And immune-checkpoint inhibitors alone showed similar tumor response, toxicity and long-term outcomes compared to platinum-based chemotherapy in selected patients.

Lung cancer is one of the most lethal diseases and has become the leading cause of cancer related deaths [1, 2]. Non-small cell lung cancer (NSCLC) is the largest subtype of lung cancer, comprising approximately 85% cases [3, 4]. The first-line treatment strategy for advanced NSCLC is based on the expression of oncogenic aberrations, such as epidermal growth factor receptor gene (EGFR), anaplastic lymphoma kinase gene (ALK), and orphan receptor tyrosine kinase (ROS) [1, 5]. However, most patients with NSCLC do not harbor these genetic aberrations; thus, cytotoxic chemotherapy is still the first-line treatment for such patients [6, 7]. Chemotherapy alone is associated with a median overall survival (OS) of 8 - 10 months, progression-free survival (PFS) of 4 - 6 months, and objective tumor response rates of 25 - 35% [8]. Moreover, the toxic effects of platinum-based chemotherapy are a concern for both clinicians and patients, as these severely impair quality of life [9]. Therefore, developing new agents with better effectiveness and less toxicity is crucial.

Drugs interrupting immune checkpoints, such as anti-cytotoxic T-lymphocyte-associated protein 4 (CTLA-4), anti-programmed cell death protein 1 (PD-1), anti-programmed cell death-ligand 1 (PD-L1), and others, can enhance anti-tumor immunity and mediate durable cancer regressions [10, 11]. Previous studies have demonstrated promising therapeutic value of immune checkpoint inhibitors as these lead to improved tumor responses, prolonged long-term survival, and less toxicity for patients with metastatic NSCLC who had progressed during or after platinum-based chemotherapy [11-16]. However, patients with advanced NSCLC usually undergo rapid deterioration during the first course of treatment, and less than half of these patients receive second-line therapy [17].

Over time several studies exploring the safety and efficacy of immunotherapy as the first-line treatment strategy for advanced NSCLC have been published [18-32]. Due to the availability of a wide range of immunotherapeutic agents and distinct treatment strategies, there is no unanimous conclusion about the therapeutic status of immunotherapy in the management of naïve NSCLC patients. Thus, we performed this meta-analysis of randomized controlled clinical trials (RCTs), which included patients with locally advanced NSCLC with metastasis, to ascertain whether immune checkpoint agents alone or in combination with chemotherapy improve survival outcomes in NSCLC patients who received chemotherapy alone as a first-line treatment.

Electronic databases including Google Scholar, PMC, PubMed, EMBASE, Scopus, and the major conference proceedings (the American Society of Clinical Oncology and the European Society for Medical Oncology) were searched by two authors (Chen and Zhou) independently for RCTs published between 1st January, 2010 and 1st June, 2019. The following medical subject heading (MeSH) terms were used: (1) "non-small cell lung cancer or NSCLC"; (2) "nivolumab or pembrolizumab or atezolizumab or ipilimumab or durvalumab"; (3) "PD-1 or PD-L1 or CTLA-4 or immune checkpoint inhibitor"; (4) "Randomized Controlled Trial or RCT". All potentially eligible and relevant clinical studies were manually retrieved and examined. Studies that met the following criteria were included in this meta-analysis: (a) RCTs; (b) studies comparing the combination of immune therapy and chemotherapy with chemotherapy alone in the treatment of advanced treatment-naive NSCLC patients; and (c) studies comparing immune therapy alone with chemotherapy alone in the treatment of advanced treatment-naive NSCLC patients. Non-randomized controlled trials, or studies unrelated to the first-line immune therapy, were excluded. Ultimately, 14 RCTs were included for quantitative analysis (Fig. 1). Any disagreements about the processes of study selection, data extraction, and methodological quality assessment were resolved by discussion and consensus with an independent expert (Zhuang).

The following information from the eligible studies were extracted by two authors (Tang and Chen) independently: year of publication, number of included patients, treatment regimen, and clinical outcomes. Clinical outcome measures included tumor response, long-term survival [progression-free survival (PFS) and overall survival (OS)], and the toxicity (3-5 grade toxicity and toxicity leading to discontinuation of treatment). Tumor response was stratified as objective responders who obtained a complete or partial response and as non-responders who experienced a stable or progressive disease according to the Response Evaluation Criteria in Solid Tumors (RECIST) version 1.1 [33].

Two authors (Chen and Zhou) independently assessed the methodological quality of the eligible studies according to the Cochrane Collaboration guidelines v5.1.0 [34].

All statistical analyses were performed using Stata12.0 software (Stata Corporation, College Station, TX, USA). Risk ratios (RRs) and hazard ratios (HRs) with 95% confidence intervals (CIs) were calculated for dichotomous data. Heterogeneity among these included studies was evaluated using I2 statistics, where an I2 value > 50% was defined as substantial heterogeneity according to the Cochrane Collaboration guidelines v5.1.0 [34]. When I2 was < 50%, the fixed-effects model was used to assess outcomes; otherwise, the random-effects model were preferred. Sensitivity analysis using both fixed and random-effect models for the same data was conducted to confirm the robustness and reliability of the results.

The database search retrieved 5220 records. After deleting duplicate results, a total of 3410 abstracts were screened for eligibility, and 42 clinical trials were considered potentially eligible for inclusion based on titles and abstract review. After retrieving and further analyzing the full-text of these studies, another 28 studies were excluded; the remaining 14 studies [18-32] were finally included in the meta-analysis (Fig. 1). These 14 RCTs included a total of 8,081 patients: 4,391 patients had been administered immunotherapy alone or combination of chemotherapy and immunotherapy, and the remaining the 3,690 patients had been administered platinum-based chemotherapy alone. The characteristics of all 14 included studies are shown in Table 1. Among these 14 included studies, ten RCTs had compared combination of checkpoint inhibitor and chemotherapy with chemotherapy alone [18-26, 31, 32]. The other four RCTs had compared checkpoint inhibitor alone with chemotherapy alone [27-30]. 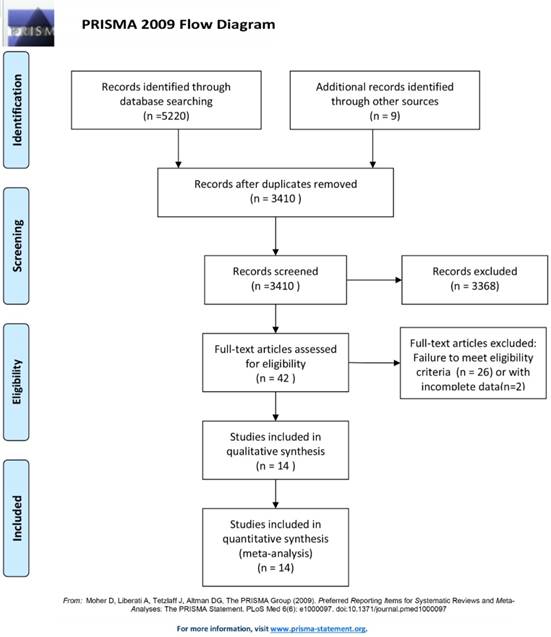 Summary of 14 randomized controlled trials included in the meta-analysis.

The methodological quality of the eligible studies is shown in Figure 6. All studies were assessed as level A. The sensitivity analyses showed robustness and reliability of our results. 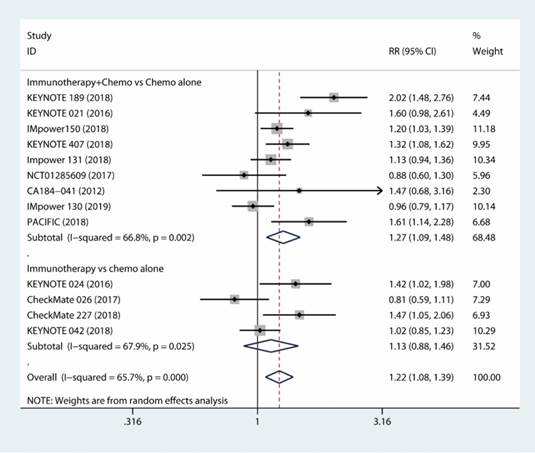 Subgroup analysis of patients with PD-L1 tumor-expression level < 1% in combination therapy versus chemotherapy alone. Forest plots of progress free survival (A) and overall survival (B).

Risk of bias of the included trials.

Numerous limitations of these trials may hinder the fairness of this meta-analysis. Since only 14 RCTs were included in this meta-analysis, the results were underpowered. Furthermore, the HRs and corresponding 95% CIs were mainly extracted from the original studies without access to individualized data, which might have contributed to reporting bias. High heterogeneity was observed among the included studies, which may have decreased the strength of our meta-analysis. The high heterogeneity may be explained by the following: First, different immune checkpoint inhibitor regimens were used in different studies. Second, inclusion criteria differed among the included studies. Third, different treatment strategies had been used among studies.

The results of this meta-analysis demonstrated the superiority of combined immunotherapy with chemotherapy over chemotherapy alone in terms of tumor response and long-term survival as a first-line treatment strategy for advanced NSCLC patients but with higher rate of 3 - 5 grade toxicity. And immune-checkpoint inhibitors alone showed similar tumor response, toxicity and long-term outcomes compared to platinum-based chemotherapy in selected patients.

The present study was funded by the Human Provincial Science and Technology Department (2017JJ2345) and the National Natural Science Foundation of China (No. 81673516).