Materials and Methods: We analyzed 1,619 patients with stage I-III LCNEC, identified from the Surveillance, Epidemiology, and End Results database, diagnosed from 2000 to 2013. The Kaplan-Meier analysis and the Cox proportional hazard model were used to study patient prognosis.

The diagnosis of LCNEC requires assessing both morphology and neuroendocrine differentiation by IHC [8-10]. In the current WHO classification, some of the features used to classify a tumor as LCNEC overlap with those applied for SCLC, NSCLC, and carcinoids [11]. As LCNEC is a very rare disease, difficult to diagnose and treat, only few data are available, and clinical trials are difficult to be performed. To date, optimal clinical management has not been established [12, 13]. Surgery is generally the first choice for early-stage patients [14], as several studies have reported that LCNEC patients can benefit from early surgical interventions, achieving satisfactory results [15-18]. However, many people with pulmonary LCNEC have a high incidence of recurrence after surgery, even when performed for early-stage disease. There is evidence that chemotherapy is an effective method for preventing disease relapse [19-21]. Moreover, molecular subtypes of pulmonary LCNEC can predict the outcome of chemotherapy [22]. Nevertheless, data on radiotherapy in pulmonary LCNEC patients are limited [23, 24]. The role of radiotherapy in LCNEC remains unclear, and further research is necessary to establish its effectiveness [12].

To further investigate the influence of surgery and radiotherapy on prognosis and, in particular, to identify the optimal therapeutic method for patients with pulmonary LCNEC, we acquired data from the Surveillance, Epidemiology, and End Results (SEER) database and performed a retrospective analysis.

Our study sample consisted of 1,619 patients, with exfoliative cytologically and histologically confirmed American Joint Committee on Cancer (AJCC) stage I-Ⅲ LCNEC, diagnosed from 2000 to 2013. The histology codes were identified according to International Classification of Diseases for Oncology (3rd Edition, ICD-O-3, 8013). Included patients were from SEER code 8013/3 (large-cell neuroendocrine carcinoma), and morphology site “lung and bronchus”. Patients with undefined nodal status or M1 disease were excluded. In addition, we also excluded patients with unknown race, tumor size, surgery/surgery type, or survival months. Data of interest on therapeutic methods included type of surgery and radiotherapy administration. Chemotherapy details were not available. We assumed that almost all these patients received systemic therapy.

The primary outcomes of this study were overall survival (OS) and lung cancer-specific survival (LCSS). OS and LCSS were analyzed using Cox regression. Kaplan-Meier analysis with the log-rank test was used to estimate OS and LCSS, and generate survival curves to compare patients who underwent surgery or received radiotherapy with those who did not [25]. Univariate analysis and multivariate analyses were carried out by the Cox proportional hazard model. Moreover, the multivariate Cox regression analysis included covariates that were significant in the univariate analysis, to determine which factors significantly influenced survival. A two-sided P-value < 0.05 was considered statistically significant. All data were analyzed using the SPSS software package, version 20.0 (IBM, SPSS Statistics, Chicago, IL).

Effect of surgery on survival

Effect of radiotherapy on survival

Characteristics of Patients with Stage I to III Large-Cell Neuroendocrine Carcinoma (n=1,619) 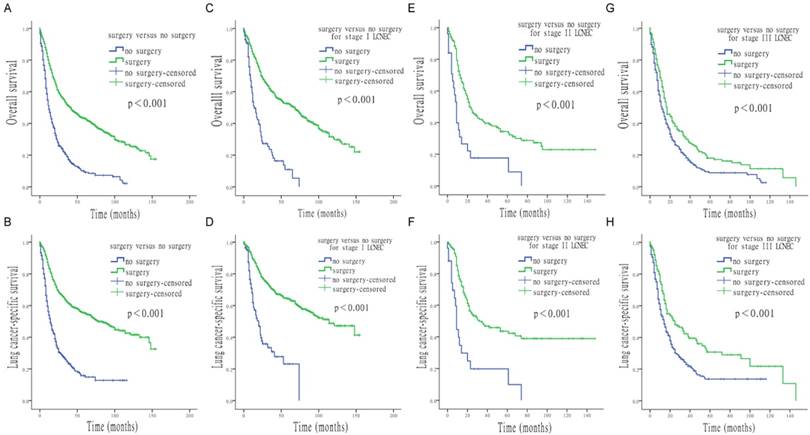 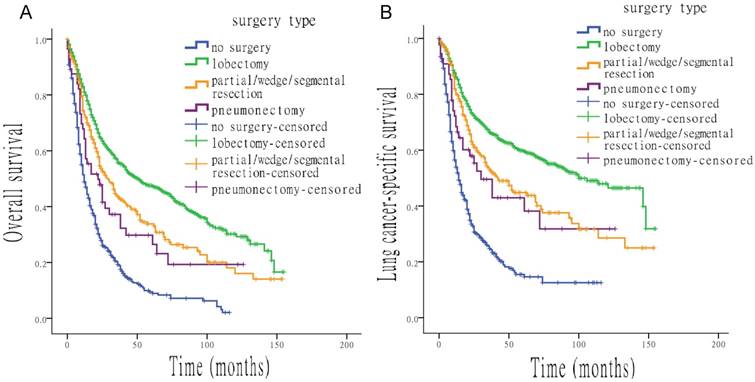 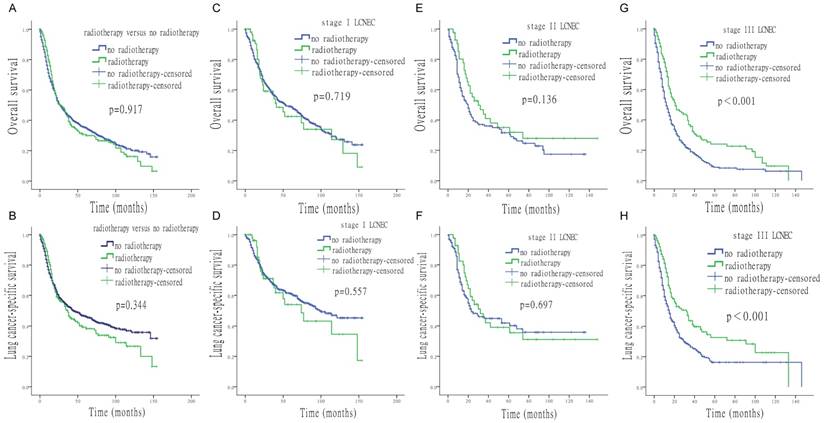 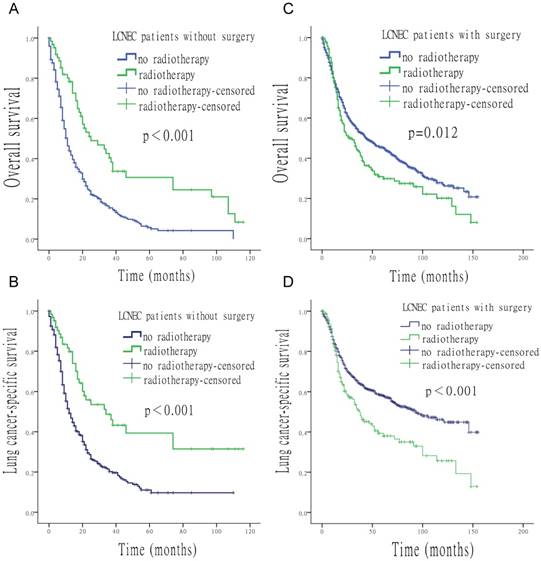 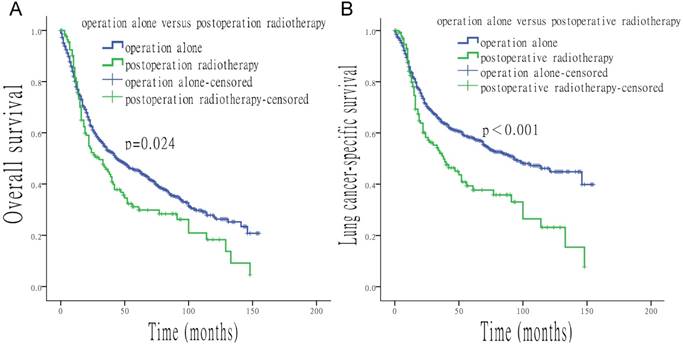 Table 3 shows that increased age, male patients, radiotherapy, and stage II or III at diagnosis, were all significant risk factors for LCNEC (all p < 0.05). Surgery was significantly associated with a favorable prognosis for LCNEC patients (p < 0.05). Primary site was not a prognostic factor for LCNEC (p > 0.05).

Recently, several studies support surgical resection for patients with early-stage LCNEC. For example, Zacharias et al. [16] found that patients treated via complete resection after systematic nodal dissection had longer survival time than previously described. Grand et al. [17] reported that surgical resection improved survival in about one third of patients. Roesel et al. [15] found that surgical treatment can achieve satisfactory results in early stages pulmonary LCNEC. The overall 1-, 3- and 5-year survival rates for the surgery group were 83.7%, 63.2%, and 53.8%, respectively. Our findings are in agreement with these retrospective studies. Data on effectiveness of radiotherapy in pulmonary LCNEC are limited. Rieber et al. [23] conducted a retrospective analysis to investigate treatment outcome following multimodal treatment in 70 patients with LCNEC. In patients with incompletely resection and postoperative radiotherapy, 2- and 5-year survival rates were 50 and 30%, respectively. The authors concluded that the administration of radiotherapy contributes to acceptable results of multimodal treatment regimes. Prelaj et al. [24] showed that patients undergoing thoracic radiotherapy had higher mPFS and mOS (12.5 vs. 5 months, p = 0.02 and 28.3 vs. 5 months, p = 0.004). Nevertheless, further research is needed to assess the effectiveness of radiotherapy in patients with pulmonary LCNEC.

The present retrospective study has some limitations. On the one hand, several clinical data were not available in the SEER database. For example, low grade (G1/G2) "LCNEC" and carcinoma with unknown Grading were not excluded, due to the limitation of SEER database. Specifically, we were unable to obtain chemotherapy data, which is important for prognosis evaluation. In addition, information about scope and dose of radiation was also lacking. Lastly, we could not evaluate positive or negative surgical margins. On the other hand, inherent selection bias is inevitable in a retrospective study.

LCNEC is an aggressive and rare tumor, with generally poor prognosis. Nevertheless, our results indicate that Lobectomy seems to be the optimal treatment for patients with LCNEC in the early stages (I-II). For stage III LCNEC patients, radiotherapy could potentially have a positive effect on survival time, especially for patients unsuitable for surgical resection. However, we do not recommend the use of radiotherapy in patients undergoing surgery, based on our results, it may reduce survival time.

The datasets generated and/or analysed during the current study are available in the [Surveillance, Epidemiology, and End Results database], [https://seer.cancer.gov/data/].

YZJ and HCS conceived and designed the study. LC, YGC and XFZ collected clinical data and performed the statistical analysis. LC, XFZ and KYC performed the research and wrote the paper. All authors read and approved the final manuscript.