Emerging evidence revealed the critical role of systematic inflammation in pancreatic ductal adenocarcinoma (PDAC). In the present study, we reviewed the records of 279 patients with advanced PDAC. Among them, 147 cases were used as the training cohort and another 132 as the validation cohort. In the training cohort, distant metastasis, carbohydrate antigen 19-9 (CA19-9), Glasgow prognostic score (GPS), neutrophil-to-lymphocyte ratio (NLR), and lymphocyte-to-monocyte ratio (LMR) were independent prognostic factors in Cox regression. A nomogram based on these factors was generated to predict median survival time and survival probabilities at 6, 12, and 18 months. The nomogram showed a better discriminatory ability than the American Joint Committee on Cancer (AJCC) TNM staging (C-index: 0.727 vs. 0.610). In the validation cohort, a nomogram composed of the same variables also showed a high discriminatory ability (C-index: 0.784). In the low-risk group with a nomogram total point (NTP) value of more than 175, patients receiving combination therapy showed better prognosis than those receiving monotherapy (P=0.015). In conclusion, the nomogram based on inflammatory biomarkers can serve as useful prognostic tool for advanced PDAC. In addition, patients with high NTP can greater benefit from combination chemotherapy than monotherapy.

PDAC is a “silent killer” worldwide with an extremely poor prognosis[1]. Most patients with PDAC are asymptomatic and approximately 80% of PDAC cases are diagnosed at a locally advanced or metastatic stage[2]. Although there have been gradual improvements in diagnostic approaches and treatment, such as FOLFIRINOX, the prognosis of PDAC remains dismal[3]. Such condition calls for an urgent need to better discriminate overall survival (OS) at diagnosis to provide valuable information for precise decision-making. Thus, it is of vital importance to identify reliable prognostic models that can be used in clinical practice.

The host immune system is crucial in the pathophysiology of PDAC[4]. Recent reports revealed complex interactions between cancer cells and immune cells, which can regulate tumor growth, progression, metastasis, and angiogenesis[5]. Moreover, inflammatory biomarkers, such as C-reactive protein (CRP), albumin, GPS, NLR, LMR, and platelet-to-lymphocyte ratio (PLR) can serve as prognostic factors for OS in pancreatic cancer[6-11]. Most of these biomarkers were evaluated separately and debate continues about the accuracy and validity of predicting prognosis with single parameters.

Staging based on the tumor, node, and metastasis system is the most widely used tool for routine prognostication and treatment of PDAC. However, other factors such as patients' performance status and nutritional status also affect the prognosis of PDAC, which may cause large variations in clinical outcome in patients with the same TNM stage. Such limitations of the AJCC TNM staging system may lead to inaccurate predictions of prognosis and inappropriate treatment strategies in clinical practice.

Nomograms are simple graphical tools integrating diverse variables for determining personalized medicine[12]. They have been commonly used to estimate prognosis in various tumors. Thus, the aim of this study was to investigate the prognostic and predictive value of a nomogram based on inflammatory biomarkers and compare it with the AJCC TNM staging system.

Fifteen clinical variables including patients' demographics, medical treatment records, pathological reports, and pretreatment laboratory data were collected for analysis (Table S1). The GPS was determined as follows: patients with high CRP levels (>10 mg/L) and low albumin levels (<35 g/L) were scored 2, those with either abnormality were given a score of 1, and those without any abnormal values were given a score of 0[16].

Statistical analyses were conducted with R 3.3.1 software (Institute for Statistics and Mathematics, Vienna, Austria) and SPSS statistical software (version 21.0, SPSS Inc, IBM, Armonk, NY, USA). The optimal cutoff values of NLR, LMR and PLR were identified by generating receiver operating characteristics (ROC) curves[17]. Chi-square test for trend was used to evaluate the relationship between GPS and clinicopathological characteristics. The correlations between NLR, LMR, PLR, and clinicopathological characteristics were assessed by Chi-square test and Continuity Correction. OS was defined as the date from chemotherapy initiation to the date of death for any reason or censored on the last follow-up visit. In the training cohort, independent prognostic factors for OS were investigated using the Cox regression model. These prognostic factors were further used to generate the nomogram. The discrimination of the nomogram was evaluated by the C-index[18]. In addition, the calibration plot was used to assess the probability of concordance between predicted survival with actual survival. The stratification of OS via NTP was demonstrated by Kaplan-Meier analysis. We confirmed the superiority of the nomogram over AJCC TNM staging system by calculating the C-index of both. We demonstrated heterogeneity within the AJCC staging system predictions by generating a histogram of nomogram-predicted probability. The discriminatory ability of the nomogram was also externally validated by the validation cohort. Two-sided P<0.05 was considered statistically significant in all tests.

Comparison of OS stratified by GPS, NLR, LMR and PLR

Establishment and validation of the nomogram

A nomogram was constructed based on these prognostic factors in the training cohort (Figure 2). This nomogram could predict patients' median survival time and survival probabilities at 6, 12 and 18 months. The Harrell's C-index of the nomogram was 0.727. After adjustment by bootstrapping with 1,000 re-samples, the calibration plots, which showed concordance between the actual and the ideal survival predictions, were demonstrated for 6-month, 12-month and 18-month survival (Figure 3). Meanwhile, a nomogram composed of the same variables in the external validation cohort also showed a good discriminatory ability (C-index: 0.784).

Comparison of baseline characteristics according to GPS, NLR, LMR and PLR

Univariate analysis of factors for OS in patients with advanced PDAC

Multivariate analysis of prognostic factors for OS in patients with advanced PDAC. 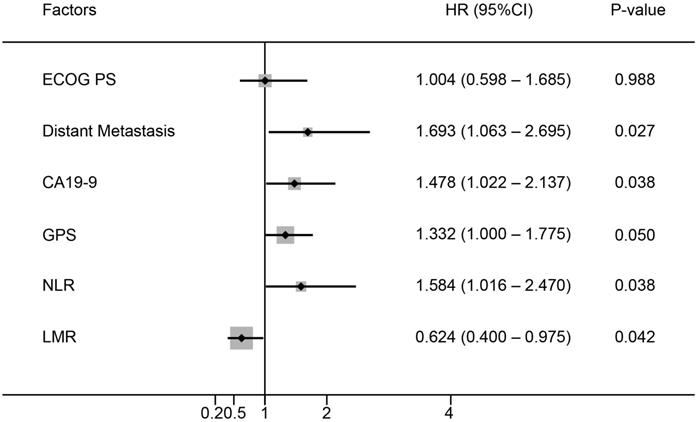 Prognostic nomogram for predicting 6-, 12- and 18-month OS probability based on distant metastasis, CA19-9 level, LMR, NLR and GPS in patients with advanced PDAC. 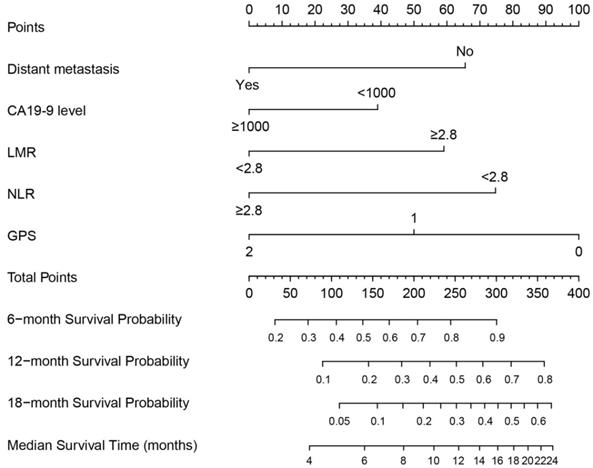 Calibration curves of the nomogram for predicting survival probabilities at 6 (A), 12 (B), and 18 (C) months. The diagonal line: the ideal calibrated model. Black line: actual calibration. Circles: median. X: mean. 95% CIs are depicted for each point along the calibration curve.

The seventh edition AJCC TNM system uses tumor, lymph node and metastasis for grouping but is without precise discriminatory ability for advanced pancreatic cancer. We developed a histogram of nomogram-predicted probability of 12-month survival for stages III and IV. Notably, even for the same TNM stage, there was considerable heterogeneity in the nomogram-predicted probabilities (Figure 5). In addition, the nomogram composed of both clinicopathological characteristics and inflammatory biomarkers showed a better discriminatory ability than AJCC TNM system (C-index: 0.727 vs. 0.610).

Comparisons of nomogram predictions with that of AJCC TNM staging groupings. 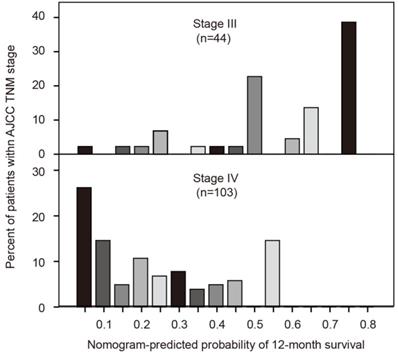 PDAC is a lethal disease and its prognosis is affected by a variety of factors including the host immune system. Currently, the TNM staging system remains the gold standard in oncology for both diagnosis and prognostication[19]. However, the system has several limitations and is unable to integrate tumor, nodes, and metastases as continuous variables without incorporating variables that affect prognosis such as inflammatory biomarkers[12]. For advanced PDAC, the TNM staging system only depends on distant metastasis to dichotomise patients into stage III or IV, resulting in poor discrimination and making it difficult for clinicians to determine a precise treatment course. Thus, we investigated whether a nomogram based on inflammatory biomarkers could predict survival for PDAC more accurately.

Nomograms are user-friendly graphical tools that incorporate diverse prognostic variables into prognosis. Currently, nomograms are progressively being used in estimating prognosis in oncology and in the move towards personalized medicine. Using nomograms, cancer patients can be evaluated and stratified in clinical trials to ensure well-balanced arms. Several nomograms have been developed for pancreatic cancer. In 2004, Brennan et al. first constructed a nomogram to predict survival probabilities in patients who underwent resection for PDAC and made it available online[20]. An external validation by Ferrone et al. in 2005 further proved the prognostic value of nomogram[21]. Because these two studies mainly focused on patients with resectable PDAC, Hamada et al. found that nomograms could provide valuable information for tailored decision-making early after the diagnosis of nonresectable pancreatic cancer[22]. In addition, on the basis of the largest phase III clinical trial of locally advanced pancreatic cancer, Vernerey et al. developed and validated a prognostic nomogram and a score for OS in locally advanced pancreatic cancer[23]. However, none of these nomograms were composed of classical inflammatory biomarkers while the fact that systematic inflammation can affect cancer patients' prognosis has long been recognized.

In clinical practice, only a few indexes, such as ECOG PS, can be used to determine whether patients with advanced PDAC should receive monotherapy or combination therapy. However, these indexes only revealed one aspect of patients while the final effect of chemotherapy can be affected by various factors such as nutritional status, immune function of patients and the biological characteristics of cancer. In our current study, we found that, in the low-risk group (NTP>175) rather than the high-risk group (NTP≤175), patients receiving combination therapy showed better prognosis than those receiving monotherapy (median OS 13.5 vs. 10.0 months, P=0.015). Because the nomogram included distant metastasis, CA 19-9 level, LMR, NLR and GPS, which could comprehensively reveal nutritional status and immune function of patients, as well as the biological characteristics of cancer, such a result suggested that patients with better nutritional status, immune function, and a less invasive tumor may benefit more from combination therapy.

As previous studies reported, we also found that the nomogram composed of both clinicopathological characteristics and inflammatory biomarkers showed a better discriminatory ability than the AJCC TNM system. The Harrell's C-index of AJCC TNM staging was 0.610 in our research, which was similar to that of other reports (Brennan et al., 0.56; Ferrone et al., 0.59; and Hamada et al., 0.612)[20-22]. However, the present nomogram demonstrated a better discriminatory ability (Harrell's C-index, 0.727), which was slightly higher than previously reported nomograms in pancreatic cancer (Brennan et al., 0.64; Ferrone et al., 0.62; Hamada et al., 0.686; and Vernerey et al., 0.68)[20-23]. This indicated that the addition of inflammatory biomarkers to the nomogram may increase its discriminatory performance. Figure 5 also demonstrates the considerable heterogeneity within AJCC TNM stages III and IV. Thus, for pancreatic cancer patients with the same TNM stage, physicians can more precisely predict prognosis and adopt more individualized management.

Several limitations should be addressed in this study. First, the study was limited by its retrospective design and a rather small population size. Second, there was a large degree of heterogeneity in the chemotherapy regimens received by patients, which may affect the robustness of the results. In addition, other factors that may influence survival such as tumor size were not included in this model. Therefore, further prospective studies with large sample sizes and external validation are needed to validate the prognostic value of nomograms composed of inflammatory biomarkers in PDAC.

In conclusion, a nomogram based on inflammatory biomarkers can serve as useful prognostic tool for advanced PDAC. In addition, patients with high NTP can benefit more from combination chemotherapy than monochemotherapy.