Currently, cancer has become a major threat to human health with increasing mortality. Many cancer patients are in an advanced stage, and few of them are cured by operations. Chemotherapy, as the main treatment for middle-late cancers, can significantly enhance survival rates. However, drug resistance is a major obstacle to the success of cancer chemotherapies. Many studies have focused on finding effective therapeutic targets for cancer drug resistance. LncRNAs, which were previously regarded as transcriptional noise, have been found to be associated with gene expression regulation concerning drug resistance [1]. In addition, lncRNAs are also involved in cell proliferation, differentiation and tumor development.

It is widely accepted that only 2% of the human genome participates in protein coding, while the remaining 98% is transcribed into noncoding RNAs (ncRNAs) [2, 3], which can be classified as small ncRNAs and lncRNAs based on their size. Small ncRNAs are those smaller than 200 nucleotides, such as microRNA (miRNA) and small interfering RNA (siRNA). LncRNAs are larger than 200 nucleotides and lack the important open reading frames [4]. LncRNAs are mostly distributed in the nucleus and are highly similar to protein-coding RNAs in the aspects of synthesis and processing. The similarity is attributable to the fact that Polymerase II also transcribes lncRNAs, which generally have fewer exons and lower expression levels than mRNAs. In addition, lncRNAs are more cell type specific and less conserved than mRNAs. Most lncRNAs contain a proximal promoter sequence, intronic or exonic sequences, and a secondary RNA structure [5].

The diversity of lncRNAs suggests potential multifunctions associated with normal physiological processes in cells. It has been reported that lncRNAs play a significant role in many life activities, such as dosage compensation effect, cell cycle regulation, epigenetic regulation and cell differentiation regulation [6]. Moreover, lncRNAs at different locations have different functions. For example, nuclear lncRNAs take part in transcriptional regulation, RNA processing and chromatin interaction [7]. Cytoplasmic lncRNAs are involved in the stability and translation of mRNAs and affect cell signaling [8].

Exploring the drug-resistant mechanisms and functions of lncRNAs in cancers has become a heavily researched subject in the bioscience field. It has been confirmed that ectopic expression of lncRNAs can result in malignant transformation and some common cancers, such as breast cancer, liver cancer and lung cancer, by interacting with DNA, RNA, and protein. However, although thousands of lncRNAs have been identified, their relationship with cancer drug resistance requires further research. In this review, we summarize the recent progress in research examining the role of lncRNAs in the drug resistance of cancer, including their mechanisms and functions, and discuss the future prospects of using lncRNAs as potential targets for cancer therapy.

LncRNAPVT1 was found to be highly expressed in tissues of cisplatin-resistant patients with gastric cancer. In addition, the results of qRT-PCR analysis and western blotting show that PVT1 upregulates the expression of MDR1, MRP, mTOR and HIF-1α, which promotes the development of MDR and suggests a potential target in gastric cancer therapy [17].

LncRNA BC087858 induces NSCLC resistance to EGFR-TKIS by a non-T790M mutation and activates the PI3K/AKT and MEK/ERK pathways and EMT [19]. LncRNA BC087858 knockout restored the sensitivity to gefitinib and suppressed the activation of the PI3K/AKT and MEK/ERK pathways and EMT by promoting the expression of ZEB1 and snails. At the same time, UCA1 expression was significantly upregulated in lung cancer patients with gefitinib resistance [20]. Furthermore, overexpression of UCA1 was associated with shorter survival in lung cancer. By activating the AKT/mTOR pathway and EMT, mTOR effectively changes the expression of UCA1, which restored gefitinib sensitivity in acquired resistance cells with non-T790M mutations.

Mutation is a non-negligible resistance mechanism. However, the relationship between lncRNA and mutations in drug resistance remains to be discovered.

DNA damage repair and warding off cell death induce cell cycle arrest, which allows repairing the damage. The mammalian cell cycle is precisely controlled by cyclin-dependent kinases (CDKs) and related pathways, such as the pRB and p53 pathways. In cancer, cell cycle arrest is disrupted by gain- and loss-of-function mutations, such as in p53 [21]. Recent studies have shown that many lncRNAs are involved in the regulation of key regulators of the cell cycle, such as cyclins, CDKs, CDK inhibitors, pRB and p53 [22]. These lncRNAs play a role in epigenetic regulation, transcription factor regulation, posttranscriptional regulation and protein scaffolding. These lncRNAs control the levels of cell cycle regulators through a variety of mechanisms, possibly providing diversity and reliability for the general cell cycle.

Current research indicates that CDKs can regulate cell cycle, cell proliferation and apoptosis, and other biological processes, but few studies have investigated CDK-related cell cycle arrest and drug resistance. CDKs and their associated pathways (pRB and p53) may represent a potential research direction in the field of drug resistance.

Interestingly, blocking CDK can induce cell cycle arrest, which reduces the curative effect of chemotherapy. It has been reported that inhibiting lncRNA NONHSAT028712 significantly reduces CDK2 mRNA levels and induces cell cycle arrest in G1 phase. In addition, receptor tyrosine kinase (RTK)/RAS signaling and cyclin E1 play important roles in CDK2 inhibitor resistance by activating E2F and ETS [23]. It can be inferred that the ETS factor ETV5 may be the downstream target of E2F.

Epithelial-mesenchymal transition (EMT) is a process in which epithelial cells are connected to the basement membrane, lose their polarity and intercellular adhesion ability, and ultimately become ectomesenchymal cells. This change in biological characteristics enables cells to migrate and invade. It is widely accepted that EMT is essential for stemness, tumor progression, metastasis and drug resistance. Chemotherapy has been shown to be a main inducer of EMT, eventually leading to secondary resistance in cancer cells. It has also been reported that lncRNA MALAT1 increases oxaliplatin resistance in CRC by promoting EMT [24, 25]. Suppressing the expression of lncRNA SLC25A25-AS1 promotes EMT and drug resistance in CRC [26]. This effect indicates that the curative effect of chemotherapy can also be enhanced by upregulating certain lncRNAs.

Autophagy is the main cause of chemotherapeutic failure in non-small-cell lung cancer (NSCLC) and can be regulated by lncRNAs. For example, lncRNA XIST significantly decreases autophagy by regulating ATG7, which indicates that XIST may be a potential target for cisplatin chemotherapy of NSCLC. In addition, the XIST/miR-17/autophagy pathway may also be a promising target [32]. Besides, lncRNA AC023115.3 suppresses drug resistance in glioblastoma by inhibiting autophagy [33].

Autophagy has dual characteristics of tumor suppressor and carcinogen and is regulated by various signaling pathways, such as PI3K-Akt-m TOR, Beclin1, BCL-2, Ras and p53. A recent study showed that the overexpression of lncRNA HOTAIR increases drug resistance in NSCLC by promoting autophagy through inhibiting the phosphorylation of ULK1. Similarly, upregulating lncRNA CASC2 can sensitize glioma to the cytotoxicity of temozolomide by suppressing autophagy [34]. However, lncRNA XIST increases chemotherapy resistance in NSCLC cells by inhibiting autophagy [32]. In addition, lncRNA HULC induces autophagy in HCC by stabilizing silent information regulator 1 (Sirt1). As a result, this lncRNA enhances drug resistance to three anti-cancer drugs: oxaliplatin, pirarubicin and 5-FU. It is also revealed that the drug resistance in HCC can be increased through the HULC/USP22/Sirt1/protective autophagy pathway [35]. 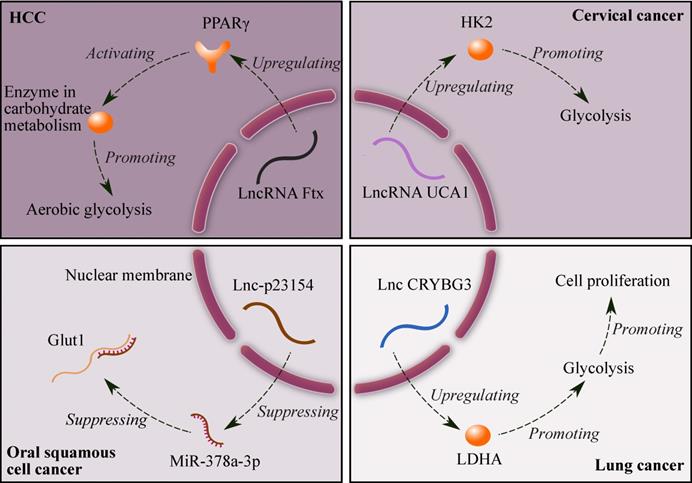 Besides, lncRNA MEG3 regulates cisplatin (DDP) resistance in NSCLC by acting as a competing endogenous RNA. MEG3 can interact with miR-21-5p directly and decrease its expression, and miR-21-5p can significantly eliminate the effects of MEG3 on DDP resistance by regulating cell proliferation and apoptosis. Moreover, SOX7 is a direct target for MEG3 and miR-21-5p and upregulating the miR-21-5p/SOX7 axis can reverse the pro-proliferative and anti-apoptotic effects induced by knocking out MEG3. This finding helps to elucidate the molecular mechanism of DDP resistance associated with MEG3 in NSCLC [41].

The overexpression of H19 can increase methotrexate resistance in colorectal cancer by inducing EMT. In addition, lncRNA PVT1 promotes EMT by upregulating the expression of the transcription factor Twist1 through the sponge effect [43].

Microenvironmental changes can lead to drug resistance in cancers. It was found that the large oxygen consumption of cancer cells causes hypoxic microenvironments in solid tumors. Therefore, cancer cells switch to anaerobic respiration, which results in persistent acidic microenvironments. Hypoxic and acidic microenvironments can lead to genetic instability and activate signaling pathways [44]. Emerging evidence shows that exosomes affect tumor-associated pathways in microenvironments, including angiogenesis, cancer stemness, cell metastasis and EMT driven by hypoxia [45]. For example, as shown in Fig. 2 (A1~A4), exosomes secrete proteins and mRNAs, which induce a desmoplastic reaction (DR) and promote fibroblast growth. As a result, the circulation of anticancer drugs is blocked, and drug resistance is acquired. Furthermore, since tumor nodes are often not close to capillaries, tumor microenvironments are limited in oxygen and essential nutrients. This limitation upregulates autophagy and suppresses cell proliferation, which may contribute to the resistance to cycle-active anticancer drugs.

The expression of lncRNA LET is suppressed in urinary bladder cancer (UBC) after gemcitabine treatment. The overexpression of TGFβ1 and a low level of lncRNA LET and miR-145 can predict poor prognosis. TGFβ1 also promotes gemcitabine resistance by downregulating the signaling of the LET/NF90/miR-145 axis. In addition, TGFβ1 can increase drug resistance in UBC by promoting cancer stemness [47]. 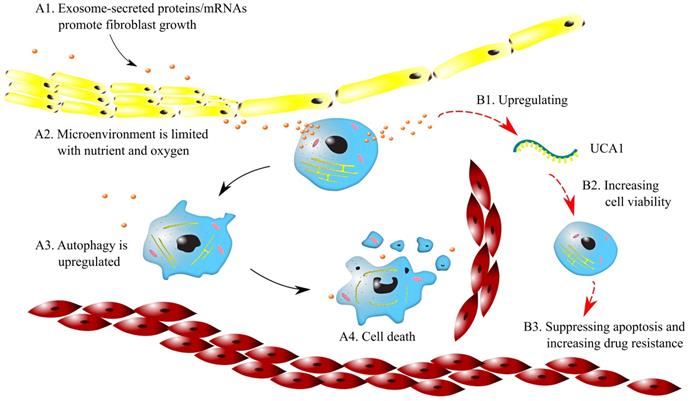 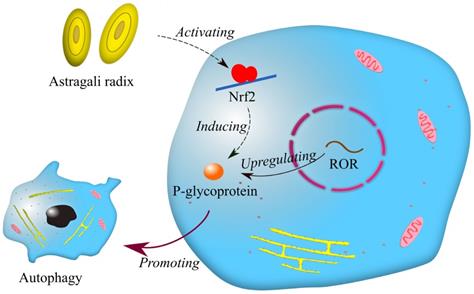 In the last ten years, extracts from Chinese herbal plants, as a natural addition, have been commonly employed in the development of new anti-cancer drugs because of their mildness and effectiveness. It has been reported that p-glycoprotein is associated with multidrug resistance in breast cancer [52]. Afterwards, Li et al. found that lncRNA ROR increases the expression of p-glycoprotein, and p-glycoprotein is involved in drug resistance in breast cancer by promoting autophagy [53]. Interestingly, a recent report showed that astragali radix promotes the expression of p-glycoprotein by activating Nrf2 [54]. It can be inferred that astragali radix may be related to lncRNA ROR in drug resistance of breast cancer (Fig. 3). Astragali radix is a famous Chinese herbal medicine widely used in traditional Chinese medicine prescriptions. Although it was previously believed that traditional Chinese medicine had little effect on treating cancers, it is now reasonable to think that traditional Chinese medicine may benefit cancer therapy by regulating drug resistance.

This review summarizes the drug-resistance mechanisms of lncRNAs in cancers. The review contains not only the typical mechanisms, that is, drug efflux, mutations of drug targets, arresting cell cycle, EMT, autophagy and apoptosis, but also newly discovered mechanisms, including glycolmetabolism, microenvironmental changes, cancer stemness, genetic modification and Chinese herbal medicines. Obtained data indicate that lncRNAs are involved in cancer drug resistance by regulating some intermediate regulatory factors. In addition, this review lists many lncRNAs that have recently been found to be related to cancers and their regulatory pathways. The functions of lncRNAs in cancer drug resistance are described in detail according to cancer types. A certain lncRNA can regulate the drug resistance of multiple cancers, and a certain kind of cancer can be associated with several lncRNAs. Finally, the overexpression of most lncRNAs enhances drug resistance in cancers, while a few of them can sensitize the cells to anticancer drugs. This effect demonstrates the functional diversity of lncRNAs, which requires further research. In addition, it is necessary to further elucidate the functions of more lncRNAs in cancer drug resistance and their mechanisms, which will provide more targets for cancer therapies.

Although many studies have focused on the functions and mechanisms of lncRNAs in cancer drug resistance, a large proportion of them remain unrevealed and warrant further investigation. Future drugs for cancer chemotherapies can be combinations of existing anticancer drugs and drugs targeting lncRNAs related to drug resistance. Besides, we anticipate that some studies can be conducted to identify the basic drug-resistant mechanisms associated with lncRNAs, which may provide some common targets for cancer therapies. Moreover, the finding that astragali radix is involved in cancer drug resistance may lead to more research on the relations of traditional Chinese medicines and the drug resistance related to lncRNAs.

This work was supported by the National Natural Science Foundation of China (No.81572281 and No.81702278). And we also thank Dr. Suiyu Chen for the helpful discussion.