Objective: The purpose of this study was to investigate multigene panel markers to predict long-term survival in patients with colon cancer.

Methods and materials: GSE39582 was randomly divided into a training set and a validation set, while TCGA-COAD and GSE17536 were treated as two independent validation cohorts. Survival-associated genes were included in elastic net penalized Cox proportional hazards regression (ENCPH) model. Based on the results of the ENCPH, a multigene panel was constructed. We evaluated predictive performance of the multigene panel by univariate and multivariate survival analysis, and time-dependent ROC analysis.

Colon cancer is one of the common malignant tumors that seriously endanger human health [1]. Due to the ageing of the population, lifestyle changes, and advances in diagnostic techniques, approximately 1.4 million new cases of colon cancer are diagnosed and 690,000 colon cancer related deaths are recorded each year [2]. Surgery, cryosurgery, radiation therapy, chemotherapy, and targeted therapy are well established management for colon cancer [3, 4]. Pathological stage is widely accepted to the key determinant of the prognosis and treatment of patients with colon cancer [3, 5]. Although surgery can treat nearly 50% of early stage colon cancer, the vast majority will relapse and often lead to death [5, 6]. Postoperative managements are widely recommended for patients with advanced stage colon cancer[7]. Chemotherapy, which often uses different drugs or drug combinations to inhibit the proliferation of tumor cells, is often used after surgical treatment and inevitably injures normal cells while killing tumor cells owning to its non-target effect [5, 8-10]. Therefore, in addition to well established pathological stage, identification of novel biomarkers related with the genetics heterogeneity of colon cancer might help the prognostication stratification and treatment individualization.

At first, we identified overall survival (OS) associated genes (genes at P value less than 0.0001) in the discovery set (GSE39582) using univariate Cox proportional hazards regression (CPH) model[16]. Then, the discovery set was divided into two subgroups as mentioned above. In the training set, elastic net regularized CPH (ENCPH) model was performed. To fit the optimal model, we performed 10-fold cross-validation to tune the two hyperparameters α and λ. After that, we built a multigene-based prognostication combination on the basis of the fitted ENCPH [17].

Assessment of the prognostication performance of the multigene signature

Development and validation of a multigene containing nomogram

Nomogram, which included several lines corresponding to certain clinical parameters, was widely used to predict the survival probability of patients in clinical settings [19]. Thus, we tried to construct the multigene containing nomogram by including the age, gender, TNM stage, tumor location, and the multigene panel. The nomogram was formed, validated with 1000 bootstrapping internally and externally, and calibrated at 3-year and 5-year using the R package “rms”. Decision curve analysis (DCA) analysis was conducted to assess the clinical application prospects of the Multigene panel in the training set [20].

C-index, also known as concordance” statistic or C-statistic, is a measure of goodness of fit for survival outcomes in a CPH model, and higher C-index means higher predictive ability[21]. Therefore, to further confirm the performance of our multigene panel, we compared the C-indexes, calculated by using the R package “survcomp [22]” , with a total of 10 biomarkers reported by others [23-33]. Student T test was used to compare C-indexes between two groups.

Finally, we performed GSEA[34] to analyze the molecular bases that related with function of the multigene panel on the survival of colon cancer patients. “c5.bp.v6.2.symbols” and “c2.cp.kegg.v6.2.symbols” was used to perform Gene Ontology (GO) and Kyoto Encyclopedia of Genes and Genomes (KEGG) enrichment analysis, respectively. Colon samples in the training set were classified into significantly different risk groups based on the cutoff mention above. Any gene set enriched with P value less than 0.05 and false discovery rate less than 0.25 were regarded as significantly enriched.

After univariate CPH analysis, a total of 92 genes were shown to significantly (P<0.0001) associated the overall survival patients in the GSE39582 cohort. We included the 92 survival associated genes into the ENCPH model fitted with the optimal hyperparameter (alpha=0.078, lambda=5.3734) calculated through 10-fold cross-validation (supplementary figure s1), According to the result of feature selection, MYB (MYB proto-oncogene, transcription factor), MSLN(mesothelin), INHBB (inhibin subunit beta B), DCBLD2 (discoidin, CUB and LCCL domain containing 2), MAP1B (microtubule-associated protein 1B), PRELID2 (PRELI domain containing 2), and SH3RF2 (SH3 domain containing ring finger 2) were finally used to build multigene panel for predicting the survival of colon cancer patients. The risk score of each colon cancer patients were estimated based on the coefficients and the expression levels of these genes (supplementary table s4). Then, patients in the four cohorts were categorized into significantly risk group based on the optimal cutoff value on the basis of the results of time-dependent ROC analysis (the cutoff values were 1, 0.999, 0.063 and -0.001 in the training set, test set, TCGA-COAD, and GSE17536, respectively).

Prediction value of the multigene panel

Clinical application of the multigene panel

In order to transform our multigene panel into clinical application, we integrated patient age, gender, TNM stage, and tumor location, and the multigene panel to build a nomogram that predicted the 3-year survival probability and 5-year survival probability of colon cancer patients. In the nomogram, each variable corresponds to a score on the Points line, and the sum of the scores corresponding to all variables also has a score on the “Total points” line, then, then 3-year survival probability and 5-year probability of a patient can be estimated by his score on the “Total points” line (figure 3A). The calibration plot closely resembled the ideal diagonal curve at 3-year and 5-year (figure 3B and figure 3C). The C-indexes for internally validation and externally validation of the nomogram were 0.715 and 0.726, suggesting that the performance of the nomogram was reliable. Moreover, we have performed decision curve analysis (DCA) of the nomogram, as shown in figure 4, the multigene containing nomogram performed better at the threshold probability ranging from 3% to 77%. 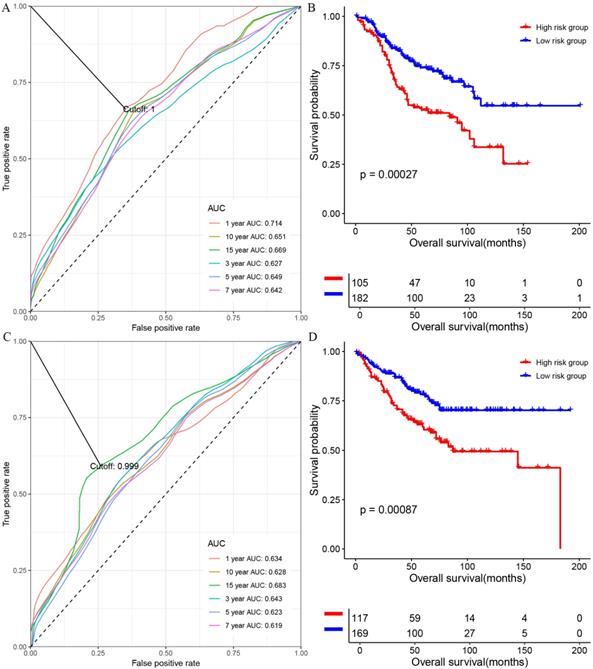 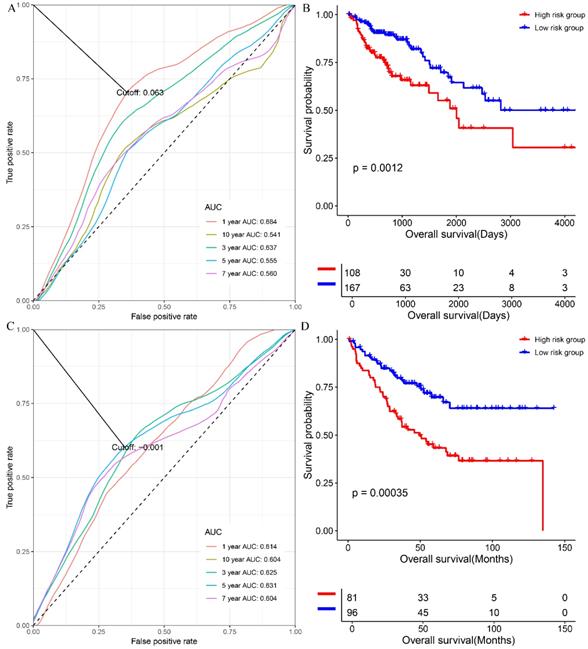 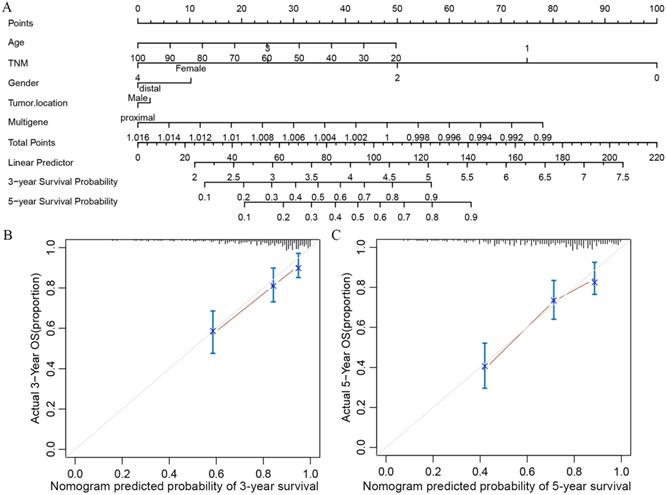 Decision curve analysis of the clinical use of the multigene based nomogram. 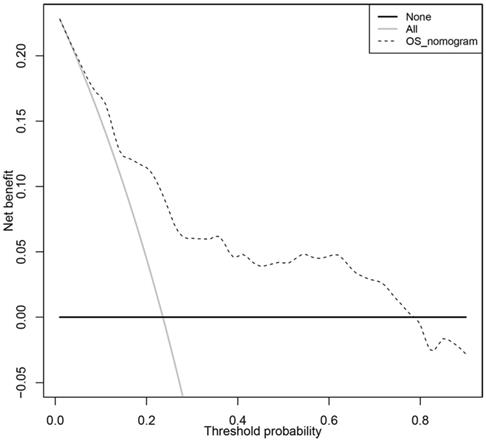 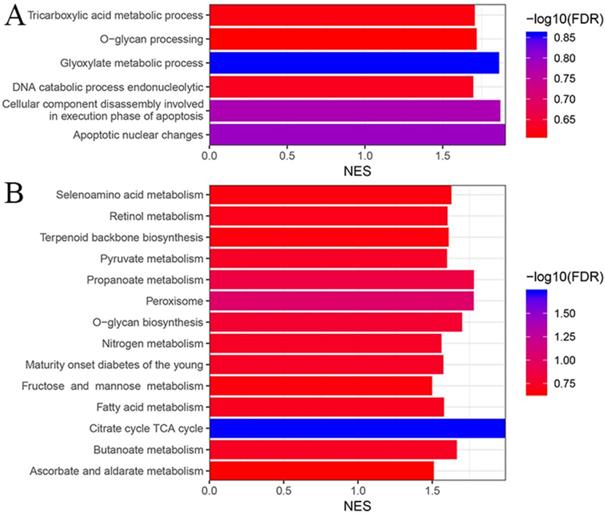 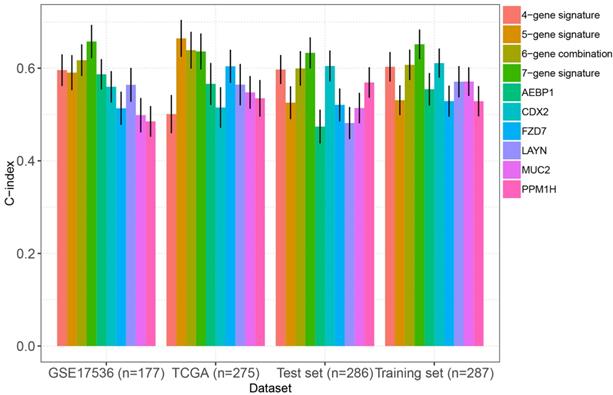 In the present study, we tried to develop a combination of multigene biomarkers (MYB, MSLN, INHBB, DCBLD2, MAP1B, PRELID2, and SH3RF2) by using ENCPH model. The assessment of the prognostication value of the multigene panel was performed on a total of 1,025 colon cancer patients (One training set, one internally validation set, and two externally validation cohorts), and the results of time-dependent ROC analysis and KM curves suggested that the multigene panel could stratified colon patients into notably different risk groups, and the results multivariable CPH model indicated that the multigene panel was an independent predictor for the OS and RFS/DFS of patients with colon cancer.

Actually, among the 7 genes included, several have been reported to be involved in the pathogenesis of colon cancer. Activation of MYB could induce colon tumorigenesis [35], and it was also selected as a target for antineoplastic therapy[36]. MSLN had been accepted to be a candidate biomarker in colon cancer [37]. Qian Z et al. demonstrated that INHBB predicted worse survival rates in patients with colorectal cancer[38] DCBLD2 was also identified as one of survival markers genes in colon cancer through consistent transcriptomic profiling by Martinez-Romero J et al.[26]. Gylfe AE et al. performed exome sequencing on a total of 25 colorectal cancer and corresponding healthy colon tissues, demonstrating that MAP1B was one of the candidate oncogene in patients with colon cancer [39]. Kim TW et al. demonstrated that SH3RF2 was significantly increased in colon cancer cells, and higher expression of SH3RH2 was associated with progression, early relapse and poor survival [40]. Thus, we have reasons to believe that the prognosis performance of the multigene panel was reliable.

As stated above, nomogram has been widely used in clinical settings, especially in the prediction and evaluation of survival of cancer patients with its easy-to-understand. Our nomogram integrated multigene, patient age, gender, TNM staging, and tumor location, which allowed clinicians to intuitively predict 3-year and 5-year survival rates of colon patients based on these clinical parameters. At the same time, internal and external verification results showed that both C-indexes for nomogram exceeded 0.7, which guaranteed the accuracy and reliability of nomogram prediction performance.

This study included three independent colon cancer studies. However, owning to the clinical information of patients reported in different studies was inconsistent; the variables included multivariable analysis was not the same as each other. For example, in GSE39582, we included age, gender, tumor location, TNM staging, and multigene panel. However, in TCGA-COAD cohort, we included age, gender, tissue type, and preoperative CEA levels. This might cause the results to be biased to some extent. Therefore, cautions should be reserved when interpreting the prognosis roles of the multigene panel and the nomogram.

15. Harr B, Schlotterer C. Comparison of algorithms for the analysis of Affymetrix microarray data as evaluated by co-expression of genes in known operons. Nucleic Acids Res. 2006;34:e8