The coiled-coil-helix-coiled-coil-helix domain containing 2 (CHCHD2) is overexpressed in several types of cancer. This study aimed to investigate the role of CHCHD2 in hepatocellular carcinoma (HCC). The expression of CHCHD2 in HCC and non-tumorous tissues was detected by immunohistochemistry and Western blot analysis, and the correlation between CHCHD2 expression and clinicopathological features of HCC was analyzed. Furthermore, the proliferation, apoptosis and migration of HepG2 cells with CHCHD2 knockdown were examined. We found that CHCHD2 was upregulated in HCC tissues, and high CHCHD2 expression was associated with poor differentiation, lymph node metastasis, local tissue invasion, high TNM grade of HCC and poor patient survival. Depletion of CHCHD2 led to significantly reduced cell proliferation, increased apoptosis and diminished migratory capacity in HepG2 cells. In addition, HCC tissues had high expression of CD105, a microvessel marker, and HepG2 cells depleted of CHCHD2 had low CD105 expression. In conclusion, CHCHD2 may play an oncogenic role in HCC via promoting tumor cell growth and migration while preventing apoptosis. CHCHD2 is a potential biomarker for poor outcome of HCC patients.

Hepatocellular carcinoma (HCC) is the most common aggressive hepatic cancer and ranks the fifth most prevalent malignancy worldwide [1,2]. HCC is also one of the most commonly diagnosed cancers in China, accounting for 50% of liver cancer cases and death [2]. The mortality of HCC is mainly due to spread via the lymphatic and blood system as a result of late-stage detection [3,4]. Therefore, it is urgent to further understand the underlying mechanisms of HCC development and progression and identify novel targets for developing therapeutic strategy of HCC.

Coiled-coil-helix-coiled-coil-helix domain-containing protein 2 (CHCHD2) is a mitochondrial protein encoded by the CHCHD2 gene located on human chromosome 7P11.2 [5, 6]. CHCHD2 contains a conserved C-terminal CHCH domain and an N-terminal mitochondrion localization sequence [7]. CHCHD2 overexpression has been found in a variety of cancers [8]. However, the role of CHCHD2 in HCC is largely unclear.

In this study, we examined the expression of CHCHD2 in HCC and investigated the correlation between CHCHD2 expression and the clinicopathological features of HCC patients. In addition, we explored the function of CHCHD2 in HCC cells. We found that CHCHD2 was upregulated in HCC tissues and higher CHCHD2 protein level was significantly associated with poor differentiation, lymph node metastasis, local tissue invasion, high TNM grade, angiogenesis and poor prognosis in HCC patients. Moreover, depletion of CHCHD2 led to significantly reduced proliferation and invasion and angiogenesis and increased apoptosis in HepG2 cells.

A total of 144 HCC patients were enrolled in this study who received surgery at the first affiliated hospital of Xi'an Medical University from January 2005 to July 2012. HCC patients were diagnosed by histological examination of surgical specimens. The clinicopathological characteristics including age, gender, and tumor size and differentiation were collected by reviewing their medical records and summarized in Table 1. No patients received pre-operative radiotherapy or chemotherapy. All patients had a follow-up record for at least five years. This study has been approved by the Institute Research Medical Ethics Committees of the first affiliated hospital of Xi'an Medical University.

Tissues blocks were dewaxed, hydrated and washed in PBS, and then immersed in 3% H2O2 for 20 min to inhibit endogenous peroxidase activity. After blocking, the sections were incubated for 2 h at room temperature with polyclonal rabbit anti-human CHCHD2 antibody (1:600; Santa Cruz, CA, USA) and CD105 antibody (1:100; Abcam, USA). After washes for three times, sections were incubated with peroxidase conjugated secondary antibody (1:1000, Bio-Rad, CA, USA) for 1 h at room temperature. After three additional washes, immunoreactivity was detected with diaminobenzidine (DAB) at room temperature and examined under a fluorescence microscope (Axioplan2; Carl Zeiss; Jena, Germany).

The cells were seeded onto 96-well plates at a density of 1×104 cells/well and cell viability was measured in 24, 48 and 72 h. At each time point, 20 µl MTT reagent (5 mg/ml, Sigma-Aldrich, USA) was added to each well and allowed to incubate for 4 h. Then 150 µl DMSO was added into each well and the plates were incubated overnight. Absorbance at 490 nm was measured by using a microplate spectrophotometer (Epoch2, BioTek, USA).

Apoptotic cells were detected by TUNEL assay using In situ Cell Death Detection kit (Roch, Pleasanto, CA, USA) according to the manufacturer's protocol. The number of apoptotic cells was counted in five randomly selected fields and expressed as a percentage of the total number of cells in the same field (apoptosis index).

Cells transfected with siCHCHD2 or NC siNRA were reseeded in a 6-well culture plate at 5×105 cells/well and incubated overnight. Then a line was scraped with a 10 μl pipette tip, and the cells were washed 3 times with PBS to remove detached cells. Space filling by cell migration was recorded at 0 and 24 h and analyzed by using Image Pro Plus 6.0 software (Media Cybernetics, Inc., USA).

Data analyses were performed with SPSS 16.0 statistical software (SPSS, Chicago, IL, USA). All date were presented as mean ± standard deviation (SD). The differences between two groups were compared with χ2 test. The means of three or more groups were compared with one-way analysis of variance (ANOVA) followed by the Tukey post-hoc test. A p-value < 0.05 was considered statistically significant.

CHCHD2 is upregulated in HCC tissues 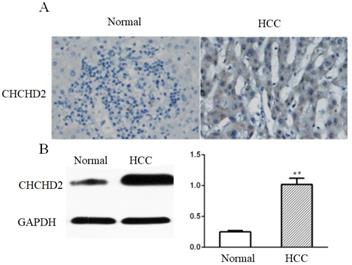 Correlation between CHCHD2 expression and clinicopathological characteristics of HCC

The correlation between CHCHD2 expression and clinicopathological parameters of HCC patients was summarized in Table 1. The results indicated that high expression of CHCHD2 was significantly associated with poor differentiation, lymph node metastasis and high TNM stage, but not associated with the age, gender, and tumor size.

Correlation of CHCHD2 expression to clinicopathological features of HCC patients

The prognostic value of CHCHD2 for HCC patients was investigated by using Kaplan-Meier survival curve and Log-rank test. As shown in Figure 2, the five-year overall survival of patients with high and low CHCHD2 expression was 43.3% and 81.1% (Log-rank p<0.05), respectively, suggesting that CHCHD2 level is negatively associated with the outcome of HCC patients.

High CHCHD2 expression level is correlated to poor patient survival. The five-year survival rate was analyzed by Kaplan-Meier method. The Log-rank test was used to compare the growth curve between patients with low and high expression level of CHCHD2. 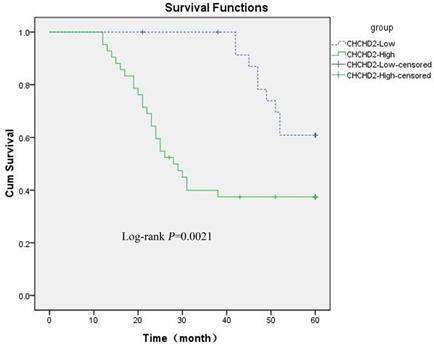 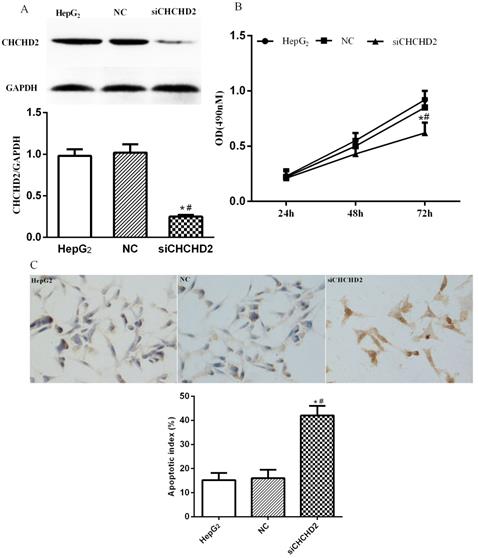 CHCHD2 knockdown suppressed HepG2 cell migration. HepG2 cells were transfected with CHCHD2 specific siRNA or NC siRNA, and a line was scratched with a 10 μl pipette tip. The filling of the space by cell migration was detected 24 h later. Data were presented as means±SD (n=3). * P<0.05, compared to untreated or NC siRNA treated cells. 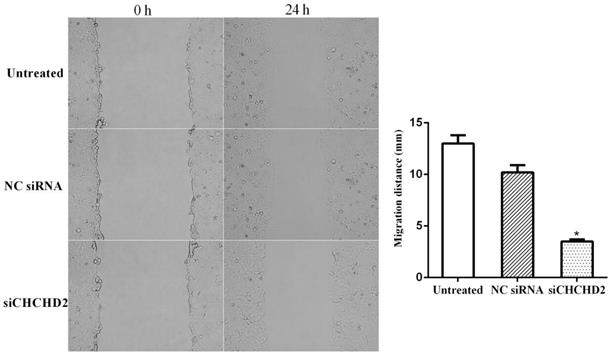 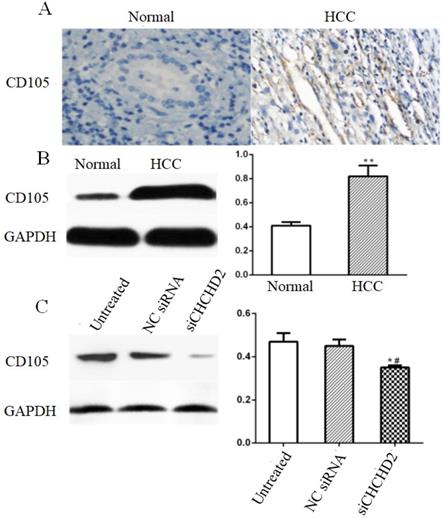 Angiogenesis represents an important mechanism for cancer development and metastasis. CD105 is one of the most commonly used microvessel markers, which is only expressed in the endothelial cells of the tumor blood vessel [9]. Immunohistochemical and Western blot analysis showed that HCC tissues had higher expression of CD105 compared to surrounding non-tumorous tissues (Fig. 5A and B). In addition, HepG2 cells depleted of CHCHD2 had lower CD105 level compared to the untreated cells and cells treated with control siRNA (Fig. 5C).

HCC is one of the most commonly diagnosed malignant tumors and represents the third leading cause of cancer-related death globally [10]. The late diagnosis and high post-operative recurrence rate remain the major barriers against long-term survival of HCC patients [11]. Therefore, it is urgently required to develop reliable prognostic biomarkers to predict the outcome of patients and identify novel therapeutic targets. In this study, we demonstrated that CHCHD2 was a potential biomarker for predicting disease progression and overall survival in patients with HCC and revealed that CHCHD2 was involved in cell proliferation, migration and angiogenesis in HCC.

In recent years, mutations of CHCHD2 and CHCHD10 are widely linked to a series of neurodegenerative diseases, including Parkinson's disease, amyotrophic lateral sclerosis and frontotemporal lobe dementia [12-14]. However, the role of CHCHD2 in cancer remains unclear. Analysis of mRNA microarray expression data obtained from the Oncomine database shows that CHCHD2 is overexpressed in many types of cancers, including breast cancer, glioblastoma, leukemia, lung adenocarcinoma and lymphoma [15-19]. Consistent with previous reports, we found that CHCHD2 was highly expressed in HCC tissues compared to adjacent non-tumorous tissues. In addition, we found that high CHCHD2 expression was associated with poor differentiation, lymph node metastasis and high TNM grade of HCC. Survival analysis showed that the overall survival of low CHCHD2 expression group was significantly longer than that of high CHCHD2 expression group. These results suggest that CHCHD2 is involved in the occurrence and development of HCC and could serve as a prognostic biomarker for HCC.

We then explored the mechanisms underlying potential oncogenic role of CHCHD2 in HCC. We found that silencing of CHCHD2 in HepG2 cells led to decreased cell viability and increased cell apoptosis. Liu et al. reported that CHCHD2 bound to Bcl-xL and inhibited the mitochondrial accumulation and oligomerization of Bax to negatively regulate mitochondria-mediated apoptosis [5]. This mechanism may explain enhanced apoptosis in HepG2 cells depleted of CHCHD2. Cell migration represented an important aspect of cancer metastasis. We therefore assessed the migratory capacity of HepG2 cells depleted of CHCHD2 and the results showed a significant inhibition of migration of HepG2 cells after CHCHD2 knockdown. In agreement with our results, Wei et al. reported that cell migration was significantly decreased in CHCHD2 depleted non-small cell lung cancer (NSCLC) cells [6].

Tumor angiogenesis is a prerequisite for the growth of a variety of tumors including HCC [20]. CD105 is a marker for tumor angiogenesis and is correlated to tumor microvessel density [9,21]. We found that CHCHD2 and CD105 were both upregulated in HCC tissues compared to non-tumorous tissues. In addition, knockdown of CHCHD2 resulted in downregulation of CD105 expression. These data suggest that CHCHD2 may be involved in HCC angiogenesis. However, further in vitro and in vivo studies are needed to elucidate molecular mechanism underlying the role of CHCHD2 in tumor angiogenesis.

In summary, CHCHD2 is upregulated in HCC tissues and high CHCHD2 level is associated with poor differentiation, lymph node metastasis, local tissue invasion, high TNM grade and poor prognosis. Silencing the expression of CHCHD2 inhibits HCC cell proliferation and migration while induces apoptosis of HCC cells. These results suggest that CHCHD2 may play an oncogenic role in HCC and CHCHD2 is a potential biomarker for poor outcome of HCC patients.

This study was supported by the Natural Science Foundation of Shaanxi Province (2016SF-327).