Methods: All consecutive metastatic colorectal cancer patients treated with first-line chemotherapy plus or not plus bevacizumab were eligible. Pre-treatment GPS were collected for all cases.

Conclusion: GPS of 0 was correlated with good prognosis. Bevacizumab added a survival advantage only in metastatic colorectal cancer patients with a GPS of 0.

Until now, angiogenic biomarkers can't effectively predict who will benefit from bevacizumab treatment, though bevacizumab is a drug designed for its antiangiogenic effects.[5] Recent studies have found that tumor infiltration inflammatory cells can induce angiogenesis mediated by inflammatory mediators and cytokines. A few studies have shown that bevacizumab exerts immunomodulatory effects when administered in combination with other anti-cancer drugs to patients affected by metastatic melanoma.[6] In light of the close relationship between inflammation and angiogenesis, considerable interest has been aroused in the role of inflammation indexes to predict the efficacy of bevacizumab.

Systemic inflammation related indexes, such as Glasgow prognostic score (GPS), lymphocyte-to-monocyte ratio (LMR), neutrophil-to-lymphocyte ratio (NLR), and platelet-to-lymphocyte ratio (PLR) have been proved to be significantly associated with poor survival in several types of cancer, including colorectal cancer [7-10]. We previously shown that NLR is an effective, and more accurate than platelet-to-lymphocyte ratio, to evaluate the survival in mCRC patients [11]. However, there is few data explored relationship between inflammation-related factors and efficacy of bevacizumab [12]. The current retrospective study was intending to evaluate the predictive value of systemic inflammation related indexes in mCRC patients receiving bevacizumab plus standard chemotherapy. If validated, these parameters could represent a reproducible, inexpensive and easy method to select candidates for treatment with bevacizumab.

Between January 2004 and September 2014, 1097 histologically confirmed and measurable stage IV CRC patients at Sun Yet-sen University Cancer Center were retrospectively reviewed. The main eligible criterion was that standard chemotherapy with or without bevacizumab should be administrated in the first-line therapy. Other criteria for eligibility were (1) ECOG performance scores (PS) of 0, 1, or 2, (2) adequate hepatic, renal and bone marrow function,(3) no inflammation related complications, (4) there are detailed pretreatment data on whole blood cell count, albumin, and c-reaction protein, (5) a life expectancy of > 3 months. Written informed consent was required before treatment.

Exclusion criteria included (1) anti-epidermal growth factor receptor (anti-EGFR) monoclonal antibodies were included in the first-line therapy, (2) metastatic lesions can be completely removed by local treatments, (3) patients in inflammatory conditions or treated with glucocorticoids or nonsteroidal anti-inflammatory drug, (4) no data on the time of progression, and (5) no clinical data available obtained.

This retrospective study was approved by the Institutional Review Board of the Sun Yat-sen cancer center. All inpatients were informed that their medical records may be reviewed for scientific research purposes and their individual confidentiality would be protected in accordance with the ethical standards of the Declaration of Helsinki.

Detailed baseline patients' characteristic data on age, sex, PS, initial stage, K-Ras status was collected based on medical records. Information on neutrophil counts, lymphocyte counts, monocyte counts, albumin and C-reaction protein (CRP) from blood tests carried out at baseline were also collected. The baseline CEA, CA199 and LDH were also collected. LMR was obtained by dividing the absolute lymphocyte count by the absolute monocyte count, NLR was calculated as the ratio of absolute neutrophil count to absolute lymphocyte count, and PLR was calculated as the ratio of absolute platelet count to absolute neutrophil count. According to previous reports, the cut-off of LMR, NLR and PLR was set as 3, 3.19and 169, respectively [12]. The GPS is defined as follows: the presence of both elevated CRP (> 10 mg/L) and hypoalbuminemia (< 35 g/L) is given a score of 2 and the presence of only 1 parameter or neither of CRP and albumin abnormalities is given a score of 1 or 0, respectively.

Between January 2004 and September 2014, 81 patients were treated with chemotherapy in combination with bevacizumab, and 213 with chemotherapy alone, which were included in the final analyses. All major clinical characteristics of two groups of patients were comparable. These clinical characteristics included age at diagnosis, sex, primary tumor, pathological grade, stage at diagnosis, K-Ras status, and proportions receiving second-line or third-line treatment (Table 1).

Kaplan-Meier estimates of median progression-free survival (PFS) and overall survival (OS) in mCRC patients with a GPS of 0, 1, and 2 treated by chemotherapy alone.

Kaplan-Meier estimates of median PFS and OS in mCRC patients with a GPS of 0, 1, and 2 treated by bevacizumab (Bev) plus chemotherapy.

We firstly explored the prognostic value of markers of systemic inflammation in the whole group. In according with previous reports in unresectable mCRC, the GPS was a reliable negative prognostic factor for OS, but high NLR/PLR and low LMR was not significantly related to shorter OS. Median OS was 26.97, 22.77, and 18.67 months for patients with a GPS of 0, 1, and 2, respectively (P = 0.01; Figure 3B).Then, we compared results from the bevacizumab and chemotherapy alone groups according to pre-treatment markers of systemic inflammation. Only in patients with a GPS of 0, both PFS and OS was in favor of patients treated with bevacizumab plus chemotherapy compared with who treated with chemotherapy alone (PFS 11.83 vs. 8.67 months, p=0.03; OS 30.80 vs. 24.87 months, p=0.04; Figure 4A, 4B). No statistically significant differences were noticed for overall survival in patients either with a GPS of 1, 2 or with different NLR/PLR/LMR levels. This relationship between GPS and treatment effect suggested that good GPS was a predictor of improved survival associated with the effect of bevacizumab.

Hematologic markers of the systemic inflammatory response have been proved to be significantly associated with the cancer-specific survival in many types of cancer [13]. In a specific setting of a certain cancer, however, the result may be biased by retrospective nature of the study, heterogeneity of patient characteristics, and inflammation-related comorbidities [14]. In unresectable mCRC, the low GPS seems to be a reliable favorable prognostic factor in most of studies, no matter what regimens are administrated for these patients [15, 16]. The present study confirmed that GPS is a reliable prognostic marker regarding OS in patients with unresectable mCRC. Median OS was 26.97, 22.77, and 18.67 months for patients with a GPS of 0, 1, and 2, respectively (P = 0.01). Other inflammation markers, such as LMR, NLR and PLR, were not proven as the prognostic factors for the patients with unresectable mCRC in the present study. In previous studies, patients with high NLR and low LMR seems to have shorter PFS and OS, but the data wasn't insufficient [12]. PLR was also not supported as an independent predictor of either OS or PFS in mCRC [17, 18].

Kaplan-Meier estimates of median PFS and OS in whole mCRC patients with a GPS of 0, 1, and 2. 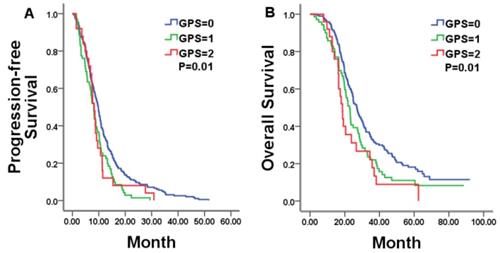 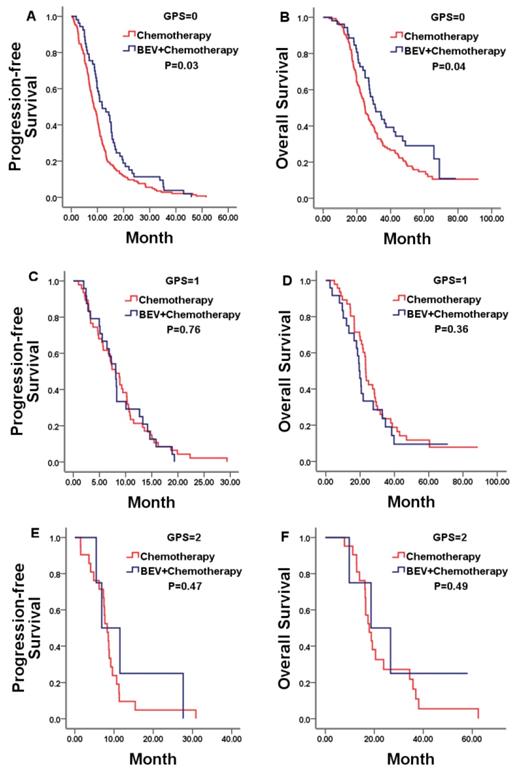 What's important is that results from the present study support the use of GPS as a predictor of clinical benefit in patients with mCRC receiving first-line bevacizumab plus chemotherapy. GPS of 0 was able to identify a subset of patients most likely to benefit from bevacizumab plus chemotherapy in PFS and OS. Maillet and colleagues analyzed the prognostic and predictive value of GPS in mCRC patients receiving bevacizumab [19]. Their data suggested that higher GPS is a poorer prognostic marker regarding OS in patients treated with bevacizumab plus chemotherapy. They postulated that the use of the GPS could help in better identifying mCRC patients who could derive benefit from intensive treatments. Because there was no comparative group with chemotherapy alone, they couldn't draw a convincing conclusion [19]. To our knowledge, this is the first study to describe the use of GPS to provide predictive information regarding bevacizumab in the first-line palliative treatment setting for patients with unresectable mCRC.

The reasons for GPS to predict benefit from bevacizumab remain unknown. Bevacizumab, as the monoclonal antibody targeting VEGF, plays the anti-cancer role by inhibiting tumor angiogenesis. However, studies reveal that VEGF facilitates tumor immune evasion and intolerance through different mechanisms [20]. Therefore, bevacizumab may also plays the anti-cancer role by overcoming immune evasion and intolerance through several mechanisms. These mechanisms include increasing CD8+ T cell infiltration and reducing T regulatory cells and myeloid-derived suppressor cells (MDSCs) infiltration in cancer nest, and reducing suppressive cytokines [21,22]. Data from phase IIIITACa (Italian Trialin Advanced Colorectal Cancer) trial suggested that patients with good systemic inflammation status (NLR < 3) in the bevacizumab plus chemotherapy arm had a higher PFS than those treated with chemotherapy alone, but bad systemic inflammation status(NLR ≥ 3) was associated with a poor prognosis [23,24]. These results imply that good systemic inflammation status may be correlated with a favorable immunological effect of bevacizumab.

There were also several limitations associated with the present study. First, due to the study's retrospective nature, selection bias cannot be excluded in the study. Second, the sample of this study is relatively small. Third, we couldn't validate our findings because of lacking an independent cohort, which made our finding less convincing. However, a Japanese study also found that patients with GPS 0 has better survival in all bevacizumab treatment [25]. This may confirm our finding to some extent. Last, we used previously reported cut-off points to analysis data, however, the reasonable cut-off values for markers of systemic inflammation remain unknown.

Our data showed that GPS is reliable prognostic index in mCRC patients. Furthermore, GPS of 0 was able to identify a subset of patients most likely to benefit from bevacizumab plus chemotherapy. Prospective studies need to confirm these results.

The datasets used and/or analysed during the current study are available from the corresponding author on reasonable request.