High expression levels of TLR9 and PD-L1 indicates a poor prognosis in patients with angioimmunoblastic T-cell lymphoma: a retrospective study of 88 cases in a single center

Materials and methods: In this study, we identified differentially expressed genes in AITL samples by bioinformatic analysis, and we first examined TLR9 and PD-L1 expression by immunohistochemical staining in patients with AITL and compared these data with clinical features and survival time.

Conclusion: TLR9 and PD-L1 expression may be a novel predictor of prognosis for patients with AITL and may serve as potential therapeutic strategy.

Angioimmunoblastic T-cell lymphoma (AITL) is an age-related aggressive lymphoma and belongs to the nodal T-cell lymphoma with T follicular helper (Tfh) phenotype [1]. It displays a unique morphologic appearance and is biologically complex [2]. Despite treatment with various therapies, the survival rate of AITL remains bleak with a 5-year overall survival (OS) rate of 30% [3]. Data on the prognostic factors of AITL are limited, and innovative therapeutic targets remain to be determined.

Programmed cell death protein-1 (PD-1) is a member of the CD28/CTLA-4 family of co-stimulatory receptors and conveys inhibitory signals to T cells [4]. Programmed death ligand-1 (PD-L1) is a ligand for PD-1 and is reported to be expressed on tumor cells. The high expression of PD-L1 is associated with poor clinical prognosis in some solid tumors [5,6] and in some subtypes of T- and B-cell lymphomas, including adult T-cell leukemia/lymphoma and diffuse large B-cell lymphoma [7,8]. However, the clinical prognostic implications of PD-1 and PD-L1 expression in AITL are unknown.

Toll-like receptor9 (TLR9), a member of the toll-like receptor family of pattern recognition receptors, binds unmethylated CpG DNA motifs present in microbial nucleic acids and activates the immune response, and is currently under investigation as an adjuvant in anti-PD-1 therapy [9,10]. Recent studies reported that TLR9 is also expressed in some types of tumor cells, including oral cancer, breast cancer, glioma and pancreatic cancer cells. Some researchers suggested that high expression of TLR9 is associated with tumor growth and migration, and it has been recognized as a new prognostic biomarker in cancer [11,12]. To date, there has been limited information about the expression and clinical significance of TLR9 in AITL.

To analyze the function of DEGs, biological analyses were performed using The Database for Annotation, Visualization and Integrated Discovery online database (DAVID, version 6.8; https://david.ncifcrf.gov/). In this online database, we input DEGs into the Gene Ontology (GO) and Kyoto Encyclopedia of Genes and Genomes (KEGG) databases to annotate genes and analyze potential functions. The protein-protein interaction (PPI) network was predicted using the Search Tool for the Retrieval of Interacting Genes online database (STRING, version 10.5; https://string-db.org/), and was constructed using Cytoscape (version 3.6.1). Interactions with a combined score > 0.4 were considered statistically significant.

A total of 88 patients diagnosed with AITL at Harbin Medical University Cancer Hospital from January 2008 to June 2018 were enrolled. The diagnosis of AITL was based on criteria established by the World Health Organization criteria (WHO 2016) [1]. Risk stratification was assigned according to international prognostic index (IPI) scores (low risk: 0-1; low-intermediate risk: 2; high-intermediate risk: 3; high risk: 4-5). The responses of treatments were defined according to the International Working Group response criteria (published in 2007) [13] or revised response criteria (published as the Lugano classification, 2014) [14].

Determination of TLR9 and PD-L1

The clinical characteristics of the 88 patients diagnosed with AITL are summarized in Table 1. The patients included 56 males (64%) and 32 females (36%), with a median age of 58 years (range, 17-81 years). Among the patients, systemic B symptoms were described in 53 patients (60%), and 88% of patients had advanced-stage (III and IV) disease by Ann Arbor classification. Almost all the patients had more than one extranodal site, and bone marrow (38%) was the most commonly involved extranodal site, followed by spleen (36%), skin (22%), and liver (13%). Autoimmune hemolytic anemia was observed in 39% of patients. Most AITL patients show elevated serum lactate dehydrogenase (LDH) levels, elevated serum β2-microglobulin (β2-MG) levels, and elevated C-reactive protein levels (84%, 66%, and 33%, respectively). Data on autoantibodies, cryoglobulinemia, and circulating immune complexes were not available for all patients, but antinuclear antibody was found in 33% of patients. Patients were stratified by IPI score; a total of 60% of patients had high-intermediate or high risk. Additionally, Epstein-Barr virus (EBV)-positive status was detected by quantitative PCR in 20 of 25 (80%) patients.

* The combined score of >0.4 was considered to be statistically significant using Cytoscape. 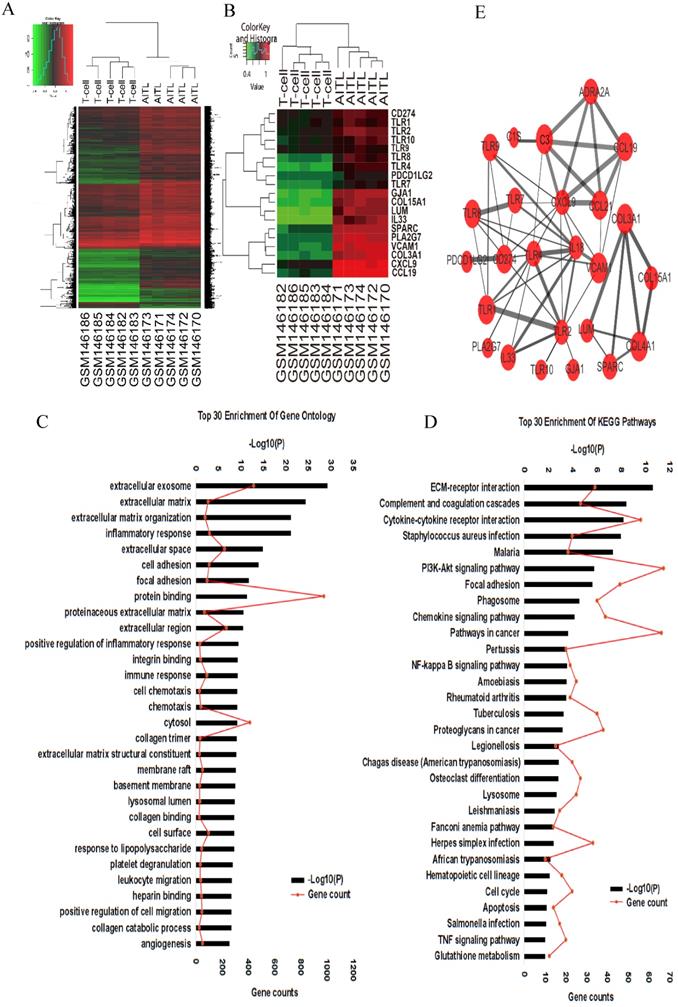 Clinical characteristics at diagnosis of 88 patients with AITL

Reactive lymph node samples displayed follicular hyperplasia, the germinal centers were mainly composed of CD20-positive B cells, and the interfollicular areas were mainly composed of CD3-positive T cells (Fig. 2A-2D). In AITL, nodal biopsy exhibited vascular proliferation and numerous intermediate-sized lymphoid cells with irregular nuclei and clear cytoplasm (Fig. 2E-2H). The presence of numerous CD3-positive T cells, CD20 highlighted rare B cells, and an expanded CD21-positive follicular dendritic cell (FDC) meshwork associated with neoplastic T cell proliferation was shown, which is a characteristic feature of AITL. Immunohistochemical examination of tumor cells showed CD3 was positive in 98% (86/88) of patients, CD4 was positive in 92% (81/88), CD10 in 57% (50/88), CD30 in 80% (70/88), BCL-6 in 56% (49/88), and CXCL13 in 88% (77/88) in patients with AITL, and the high expression rates of Ki67 (≥ 45%) were 59% (52/88) (Table 2 ).

Pathologic features in 88 patients with AITL

Among the 88 patients, 79 patients received chemotherapy with CHOP, CHOPE, or Hyper CVAD regimen, including five patients who received adjuvant radiotherapy following chemotherapy as the first-line treatment, two patients who did not receive any therapy, and seven patients who had autologous stem cell transplantation as consolidation therapy after achieving the first complete response/remission (CR) (Table 1). A total of 28 patients (32%) achieved CR or unconfirmed CR. The 5-year progression-free survival (PFS) rate was 22%, the median time of PFS was 12.00 months (95% CI: 8.539-15.461; Fig. 3A). And the 5-year overall survival (OS) rate for 88 patients with AITL was 37%, the median time of OS was 20.00 months (95% CI:13.558-26.442; Fig. 3B). At the close of the study, 55% of patients had died.

TLR9 and PD-L1 expression in AITL 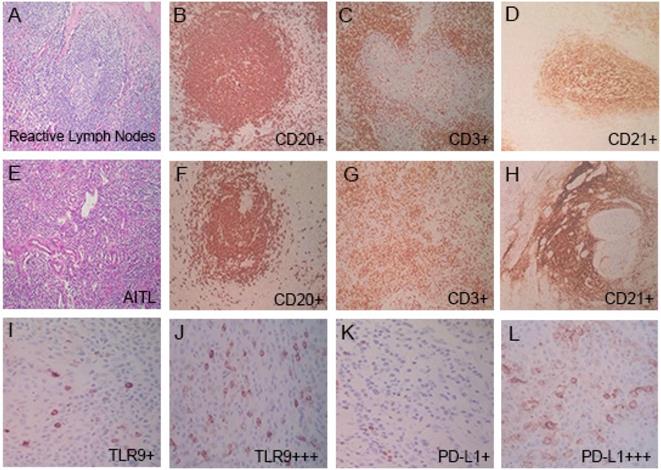 Kaplan-Meier analysis for PFS and OS in patients with AITL. (A) PFS. (B) OS. 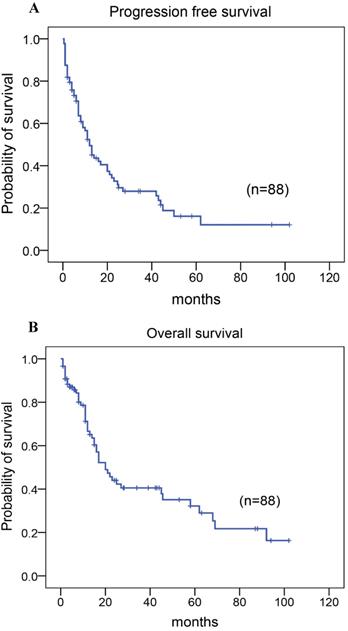 Univariate and multivariate analyses of prognostic factors in AITL 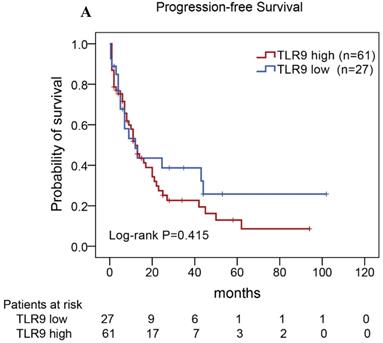 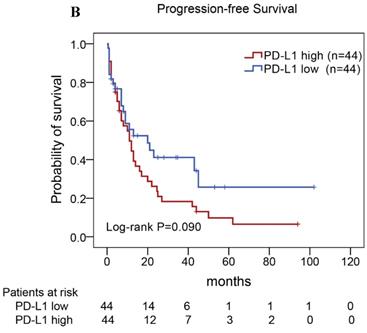 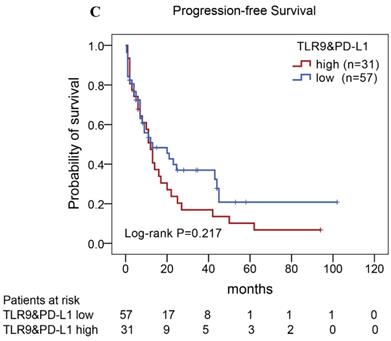 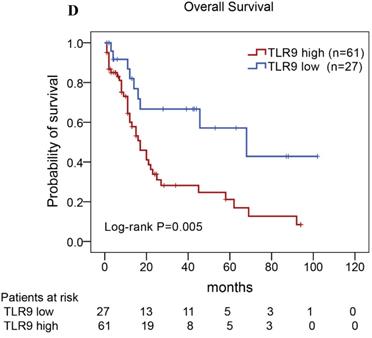 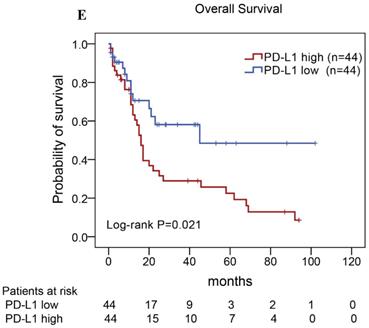 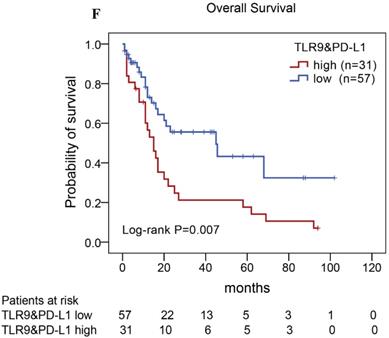 In our study, we further found inferior overall survival in AITL with clinical features of ECOG status ≥ 2, advanced-stage, elevated serum LDH levels, elevated serum β2-MG levels, and high IPI score (Fig. 5). And we further demonstrated that AITL patients with IPI scores of 0 or 1, 2, 3, and 4 or 5 had 2-year OS rates of 68%, 52%, 47%, and 29%, respectively, and high IPI score predicted shorter OS in patients with AITL (Log-rank P=0.044; Fig. 5E). 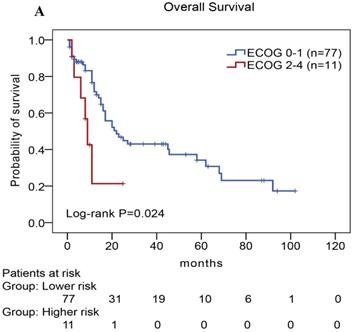 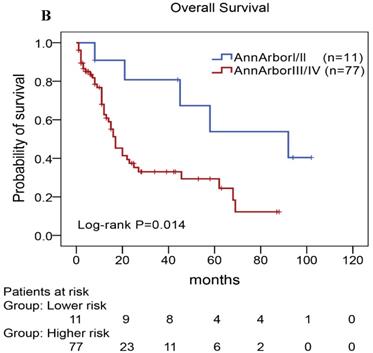 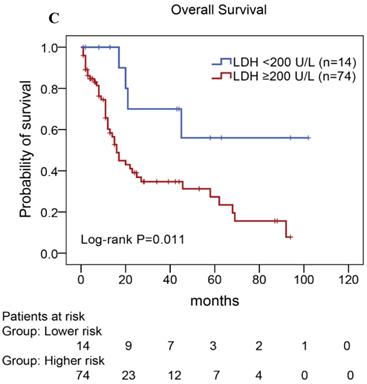 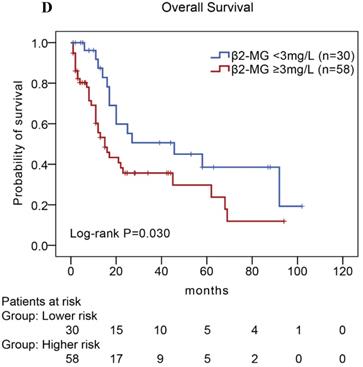 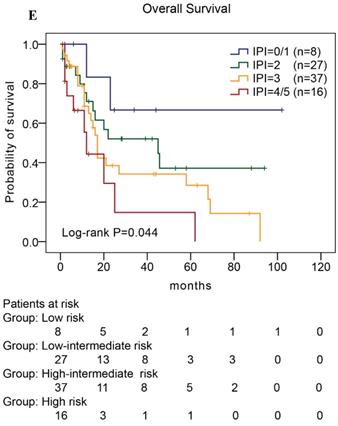 Due to low incidence, the clinical characteristics and prognosis evaluation of AITL remain poorly understood. In this study, we identified DEGs in AITL by bioinformatics analysis, which may help distinguish AITL from other T-cell lymphoma subtypes. Meanwhile, we studied 88 AITL patients who received treatment at Harbin Medical University Cancer Hospital, which is a large study for a single center in China. And we explored TLR9 and PD-L1 expression in AITL tissues by immunohistochemical staining, and evaluated the association between those expression and clinicopathological features, which may disclose clinical significance of TLR9 and PD-L1 expression in AITL.

Recent study with gene expression profiling of 114 AITL reported that the cytokine environment includes angiogenesis, inflammatory, immunosuppressive and many chemokines/receptors, indicating a complex immune network in AITL [17], which are consistent with our results. In our study, we further identified several DEGs related to immune function including PD-L1, PD-L2, and multiple TLRs, which may play a critical role in the progression of AITL. Based on KEGG pathway analysis, we also evaluated several cancer-related pathways in AITL, including PI3K-Akt signaling pathway, NF-κB signaling pathway, cell cycle, apoptosis, and TNF signaling pathway. Previous study reported that the NF-κB pathway, immunosuppressive pathways (TGFβ pathway) and IL-6 signaling were enriched in AITL [18]. And Zhou LL et al. suggested that activation of PI3K/AKT, JAK-STAT, and NF-κB signaling pathway are associated with processes of T-cell lymphoma [19]. These pathways may play an important role in invasion, metastasis, and therapeutic applications for AITL.

Several studies have demonstrated strong PD-1 expression on tumor-infiltrating lymphocytes in the majority of patients with AITL, and PD-1 expression is the most sensitive marker for AITL [20]. In our study, we reported PD-1 and PD-L1 expression in AITL tissue by immunohistochemical staining. However, we found 14 patients with PD-1 low expression, and further found that these patients had CXCL13, CD10, BCL-6 and other Tfh-related antigen expression, meanwhile, combined with pathomorphological features to confirm the diagnosis of AITL, which was consistent with previous reports [20,21]. Moreover, we demonstrated that patient with high PD-1 expression had poorer OS compared with low PD-1 expression, and high expression of both PD-1 and PD-L1 had the worst survival rate when compared with the single-high and double low expression. These suggested that the PD-1/PD-L1 expression may contribute to a worse clinical outcome in AITL and may be useful as a clinical prognostic indicator to select appropriate therapeutic approaches for individual patients.

In studies on TLRs and cancer, TLR9 is also expressed in lymphoma cells including oral cancer, breast cancer, glioma and pancreatic cancer cells. Several studies reported that the high expression of TLR9 is associated with tumor growth and migration, and it has been recognized as a new prognostic biomarker in cancer. However, the prognostic significance of TLR9 expression in malignancy is still controversial. Previous studies suggested that the high expression of TLR9 was significantly associated with a shorter OS time [22, 23]. However, Leppänen et al. suggested that TLR9 high expression indicated a more favorable prognosis [24]. In this study, we analyzed the expression and clinical relevance of TLR9 in AITL and demonstrated that TLR9 expression was an independent prognostic factor, indicating poor prognosis, which suggested that abnormal TLR9 levels may potentially influence the progression of AITL.

Prognostic factors affecting the overall survival of patients with AITL

In this study, we also analyzed the correlations between TLR9 and PD-L1 expression and survival time in patients with AITL. We found that the median PFS time for patients with low or high expression of those markers was consistently shorter and the PFS time for patients with high expression was shorter than that for patients with the low expression group. Those indicated that AITL patients with high expression had disease progression at an early stage. In addition, the 5-year OS rate for AITL patients with PD-L1 high expression was only 24%, indicating that the disease has strong clinical aggressive characteristics, which was consistent with the characteristics of AITL reported in the previous literature. Thus, exploring the prognostic factors in AITL remain an area of clinical interest. We reported that IPI scores were significant factors in predicting the survival of patients with AITL. We further reported that ECOG performance status, Ann Arbor stage III or IV, elevated serum LDH levels, and elevated serum β2-MG levels were prognostic factors for a shorter OS. However, the application of IPI and PIT scores for AITL is still controversial. Some studies suggested that IPI is not a good prognostic model for AITL [28], while others have supported the prognostic value of IPI in AITL [29,30]. In addition, factors not used in IPI, such as IgA, anemia, bone marrow involvement, also significantly affected prognosis [30]. Additionally, study has suggested that circulating EBV DNA levels were a prognostic factor for survival [31]. A large population and multicenter study is needed to confirm the findings.

In conclusion, we demonstrated that TLR9 and PD-L1 expression indicates a poor prognosis in patients with AITL. The identification of specific prognostic factors for patients with AITL may improve our ability to identify alternative therapies. With the development of novel and complex technologies in genomics and proteomics, significant advances in AITL treatment can be expected in the future.

All procedures performed involving human participants in our study were in accordance with the ethical standards of the Institutional and/or research committee and with the 1964 Helsinki Declaration and its later amendments or comparable ethical standards. The research was approved by the ethic committee of Harbin Medical University Cancer Hospital. Informed consent was obtained from all patients and complied with the Declaration of Helsinki.