Background: Cancer patients with atrial fibrillation (AF) were excluded in the major clinical trials. We therefore investigated the efficacy and safety of novel oral anticoagulant (NOAC) versus warfarin in these patients.

Conclusion: In cancer patients with AF, NOAC were associated with significant reduced IS/SE, major bleeding, and ICH compared to warfarin.

Patients with atrial fibrillation (AF) and a calculated CHA2DS2-VASc score ≥1 in men and ≥2 in women requires anticoagulation therapy with warfarin or novel oral anticoagulant (NOAC) [1]. Cancer is an important condition associated with development of AF [2,3]. A higher cardiovascular risk factors has been noted in AF patients with cancer than without [4]. In cancer patients, there is increased risk of venous thromboembolism due to cancer-related disturbance of homeostasis and hypercoagulable state [5]. In addition, cancer patients undergoing chemotherapy frequently has complication of bleeding due to thrombocytopenia [6]. In cancer patients with AF, currently there is no guideline to direct our clinical management and they are less likely to receive adequate treatment for the concomitant diseases. Traditionally, the major landmark trials of NOAC with dabigatran, rivaroxaban, apixaban, and edoxaban for use in AF excluded patients with cancer [7-10]. Recently, edoxaban was found to be noninferior to subcutaneous low molecular weight heparin for the treatment of cancer-associated venous thromboembolism in the randomized clinical trial [11]. However, there is still lack of evidence supporting the use of NOAC over warfarin in these cancer patients with AF. Therefore, the aim of this study is to determine the efficacy and safety associated with use of NOAC versus warfarin in these patients.

Taiwan's National Health Institute Program started in 1995 and provides 99.5% coverage for the 23 million residents in Taiwan. The NHI Research Database (NHIRD) provides all dates of inpatient and outpatient services, diagnoses, emergency room visits, prescriptions, examinations, operations, and expenditures, and data are updated biannually. With over 95% of Taiwanese population consists of Han Chinese, our study is considered of uniform ethnic background. The Institutional Review Board of Chang Gung Memorial Hospital Linkou Branch approved this study (IRB No. 201800725B1).

By searching electronic medical records from the NHIRD between January 1, 2010 and December 31, 2017, we retrieved patients with diagnosis of AF, using at least 1 inpatient or 2 outpatient claims for nonvalvular AF [12]. Active cancer was defined as cancer receiving treatment or diagnosed within last 6 months from previous report [12] and by NICE guide in United Kingdom and a previously published report [13], therefore we did not enroll patients whose follow-up period >6 months. Patients with cancer were screened, with exclusion criteria of no cancer or more than one type of cancer, not using oral anticoagulant (OAC) of either warfarin, dabigatran, rivaroxaban, apixaban, or edoxaban, switching of OAC agents, and patient age <18. In addition we exclude patients with cancer and AF diagnoses >1 month apart and use of OAC and AF diagnosis > 1 month apart. Primary outcomes defined as ischemic stroke (IS)/systemic embolism (SE), GI bleeding, major bleeding, intracranial hemorrhage (ICH), acute myocardial infarction (AMI), and death from any cause at 6 months and 1 year.

We selected efficacy outcome of IS/SE, AMI, and death from any cause, and safety outcomes of major bleeding, GI bleeding, and ICH at 6 months and 1 year. The major bleeding was defined according to principle or secondary diagnosis of hospitalization and emergency visit and any blood transfusion order, which included admission for any bleeding, required blood transfusion >2 U, and life-threatening bleeding or vital organ hemorrhage, which included ICH. Death from any cause was defined by withdrawal from the NHI program [14].

Ascertainment of Diseases and Comorbidities

Each patient who was in warfarin group was matched to a patient in the NOAC group. We compared the baseline characteristics, comorbidities, and medication, CHA2DS2-VASc score, and HAS-BLED score between the study groups using t-test for continuous variable or chi-square test for categorical variable. We compared the risk of death from any cause between groups using a Cox proportional hazard model. We generated the plot of cumulative probability using subdistribution hazard function for time to event outcomes. A P value < 0.05 was considered to be statistically significant. No adjustment of multiple testing (multiplicity) was made in this study. All statistical analyses were performed using commercial software (SAS 9.4, SAS Institute, Cary, NC).

In order to validate our study findings and check for potential selection biases, we performed the sensitivity analysis. In contrast to the main analysis which we exclude patients with AF and cancer diagnosed >1 month apart, we re-analyzed the data with AF and cancer diagnosis >1 year, which is similar to ARISTOTLE study on apixaban that enrolled patients with cancer within the previous 12 months. The result of the main study was compared to different enrollment criteria to assess whether the primary findings would be modified.

To our knowledge, this is the first study to investigate the efficacy and safety of cancer patients with AF who were on warfarin or on NOAC in ethnic Chinese. Our study had two findings. (1) In cancer patients with AF, patients on NOAC had significant reduced IS/SE, major bleeding, and ICH compared to patients on warfarin. (2) There was no difference on GI bleeding, AMI, and death from any cause between the two groups at 6 months and at 1 year.

AF has been found to develop in patients with cancer due to comorbid diseases or direct tumor effect. Given that both diseases occurred with increased incidence in aging population, the 2 conditions are found to be coexist with increased frequency in clinical scenarios [18]. Although major clinical trials of NOAC for stroke prevention in patients with AF reported benefits of reduced IS/SE and major bleeding compared use of warfarin, the trials excluded patients with cancer therefore there was the knowledge gap in the anticoagulation use in cancer patients with AF. Due to cancer related hypercoagulability, venous thromboembolism, and cancer-induced thrombocytopenia; it has been complicated to manage these patients with AF. As a matter of fact, it is possible that these patients were frequently undertreated.

A recent retrospective study compared the effectiveness of NOAC which included rivaroxaban, dabigatran, and apixaban to warfarin in patients with AF and cancer [12]. The authors reported no significant difference in IS in these 3 NOACs compared to warfarin, and no significant difference in severe bleeding in rivaroxaban and dabigatran to warfarin [12]. There was however significantly reduced severe bleeding in apixaban compared to warfarin (p = 0.01) [12]. In this study however, edoxban was not included in the comparison. Current evidence of comparative treatment efficacy and bleeding complication with edoxaban and warfarin was only available from the management of venous thromboembolism in Houkosai Study [11]. Although edoxaban was noninferior to subcutaneous dalteparin for recurrent venous thromboembolism, there was a significantly increased bleeding among edoxaban users [11]. Another recently published study investigated provider specialty, anticoagulation, and stroke risk in patients with AF and cancer, using anticoagulation prescription filled 3 months prior to and 6 months after AF diagnosis as enrollment criteria [19]. The author noted that patients with history of cancer were less likely to fill prescription with anticoagulation [19]. In addition, patients with cancer were more likely to fill prescription if seen by a cardiologist with reduced risk of stroke (HR 0.89, 95% CI 0.81-0.99) and without an increased risk of bleeding (HR 1.04, 95%, CI 0.95-1.13) [19].

Numbers <5 are not shown, as per confidentiality policies of the Taiwan National Health Insurance Research Database. 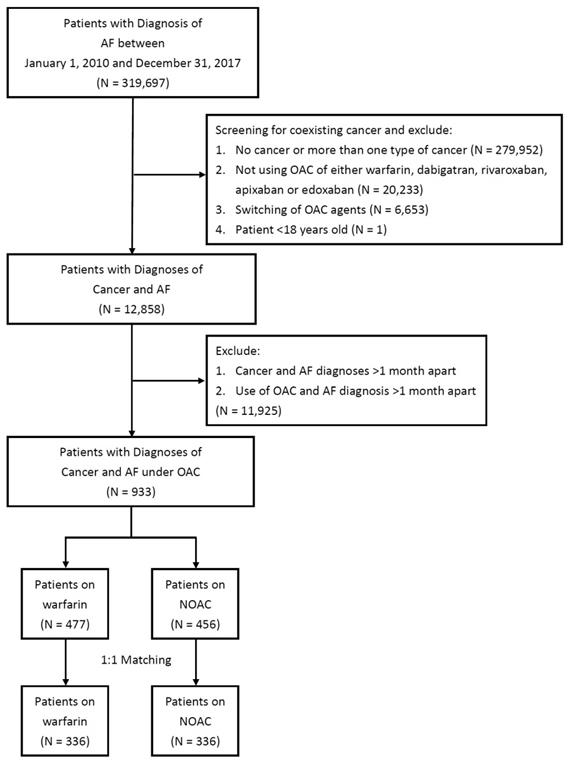 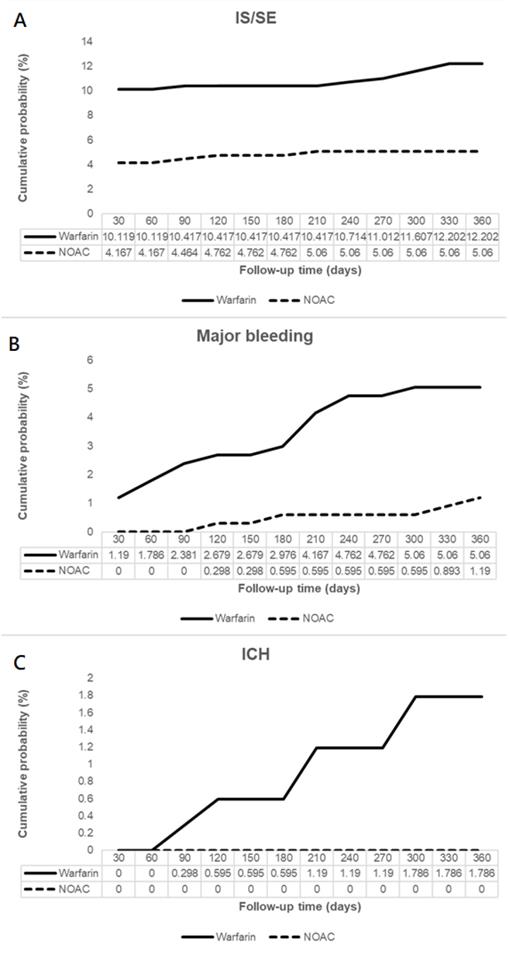 In a recent retrospective study, efficacy and safety of NOACs among Korean patients with AF and newly diagnosed cancer were studied. In the study which propensity score was performed for age, sex, comorbidities, CHA2DS2-VASc and HAS-BLED scores, the authors reported the significantly decreased incidence of IS/SE, major bleeding, and all-cause mortality in NOACs treated group as compared to those with warfarin. In addition, these results were not affected by different type or reduced dosage of NOACs in up to 71.9% patients in the NOACs group [20].

In this study, we retrospectively enrolled patients with AF and then screened for coexisting cancer and excluded patients with more than one type of concomitant cancer. In contrast to previous study which did not exclude patients who switched between different anticoagulants [12], our study excluded patients who had switching of OAC agents. In addition, using stricter criteria compared to previous studies [19,20], we excluded patients whose diagnoses of cancer and AF were >1 month apart, and use of OAC and AF diagnosis >1 month apart. After exclusion criteria, we then propensity score matched these patients, including age, sex, comorbidities, CHA2DS2-VASc and HAS-BLED scores, and additionally the co-administered medications, resulting 336 patients on warfarin and 336 patients on NOAC for analysis. During 6 months and 1 year follow up, we found patients on NOAC had significantly reduced IS/SE, major bleeding, and no incidence of ICH at 6 months, compared to patients on warfarin. The same results extended to 1 year with significantly reduced IS/SE, major bleeding, and still no incidence of ICH. There was no difference on GI bleeding, AMI, and death from any cause at 6 months and at 1 year. In summary, in comparison to warfarin, NOAC appears to be effective for prevention of ischemic stroke and systemic embolism in cancer patients with AF while no increased bleeding events occurred.

There are several limitations in epidemiologic data from NHIRD. First, using ICD-9-CM and ICD-10 codes for patient screening may miss some cases for conditions not coded correctly. Second, due to the limitation of NHIRD where detailed report of imaging study on ischemic stroke and intracranial hemorrhage were not available therefore the extent of tissue damage could not be quantified, we could still obtain incidence from the diagnosis for the occurrence of ischemia or hemorrhage. Third, we did not assess the quality of warfarin control by calculating the time in therapeutic range, since these data are not available in the NHIRD. Fourth, we did not analyze individual NOACs to delineate the efficacy and safety of each drug compared to warfarin since the number of later induced edoxaban user would be small. Further studies to generalize our study results to other populations thus are warranted.

In cancer patients with AF, NOAC was associated with significant reduced ischemic stroke/systemic embolism, major bleeding, and intracranial hemorrhage compared to warfarin. NOAC may be considered in preference to warfarin in these patients.