Inflammatory breast cancer (IBC) is a fatal form of breast cancer. IBC patients present with unfavorable prognosis mainly attributable to high risk of distant metastasis. Thus, in this cohort study, we aimed to explore metastatic profiles of different molecular subtypes of IBC and elucidate the clinical and prognostic characteristics among different metastatic sites. Patients diagnosed as IBC between 2010 and 2016 were identified from the Surveillance, Epidemiology and End Results (SEER) database. Chi-square tests were performed to compare metastatic distribution among different molecular subtypes. We further used odds ratio calculation to analyze the combined metastatic patterns. Kaplan-Meier methods and multivariate Cox regression models were applied to analyze survival data among different metastatic organs. In total, we enrolled 635 IBC patients between 2010 and 2014 as the training cohort and 242 IBC patients between 2015 and 2016 as the validation cohort, All the included patients were recorded with known metastatic status, follow-up data and molecular subtype. In the present study, we elaborated the following three points: (1) Elucidating the distribution of single-organ metastases in IBC. Bone and brain were the most and least common metastatic lesions for all subtypes of IBC, separately. (2) Clarifying the combined metastatic patterns and tendency of co-metastases. Bi-organ metastasis occurred most frequently among all combined metastases. Several combinations, such as liver and bone, lung and brain, were preferential for bi-organ metastasis. (3) Analyzing prognostic values of single-organ and bi-organ metastases. All single-organ distal metastases were independent risk factors indicating an unfavorable prognosis. In conclusion, our results would provide more information for clinical decision and future studies.

Breast cancer is the most frequent malignancy and the second most frequent cause of cancer related death in women [1]. Inflammatory breast cancer (IBC), a locally advanced neoplasm, accounts for 1% to 2% of all invasive breast cancers [2]. Despite its rarity, IBC contributes to a disproportionate number of breast cancer specific mortality [3]. Due to tumor infiltration of the dermal lymphatics, the patients develop rapid onset of characteristic skin changes from the time of confirmed diagnosis [4]. Thus, it is crucial to make an accurate diagnosis and start rapid approach to treatment for this fatal malignancy.

By far, management of IBC is based on multimodality therapy which includes surgery, chemotherapy and radiation therapy [5, 6]. Under this circumstance, IBC patients have markedly poorer prognosis compared with non-inflammatory breast cancer, with under 55% of 5-year overall survival rate [7]. This disappointing prognostic data mainly attributes to high risk of distant metastasis and locoregional recurrence [8]. Surprisingly, 85% of IBC patients had regional lymph node invasion, and over 30% present with distant metastasis at the time of diagnosis [9]. Bone is a common metastatic organ for IBC, as well as visceral sites including lung and liver [10]. Previous studies suggested the prognostic difference between patients with bone metastasis and visceral metastasis [11, 12]. Also, IBC patients have a high risk of developing brain metastasis, which usually portends a frustrating prognosis with a median survival less than six months [13].

However, the metastatic pattern of IBC still needs further investigation. And the prognostic ending of diverse metastatic lesions needs to be elaborated more clearly. Therefore, it would be vital to illustrate the metastatic distribution for better clinical decision. In the present cohort study, we aimed to explore metastatic profiles of IBC, by reviewing data from the SEER database. And we also intended to elucidate the clinical and prognostic characteristics among different metastatic sites.

A retrospective cohort research was performed by using data from the Surveillance, Epidemiology and End Results (SEER) national database. The SEER*Stat software (Version 8.4, National Cancer Institute, Washington DC, USA) was used to access the database and a data-use agreement was signed for this study.

Patients were enrolled in this study according to the following inclusion and exclusion criteria. Inclusion criteria: (1) Patients were diagnosed with inflammatory breast cancer; (2) Breast cancer was the first primary malignancy. Exclusion criteria: (1) Metastatic status was unknown; (2) Follow-up data was missing; (3) Information about molecular subtype was unknown. Patients diagnosed with IBC between 2010 and 2014 were studied as the training cohort, and IBC cases between 2015 and 2016 were assigned to the validation cohort. The detailed procedure of cohort selection was outlined (Fig. 1).

In this study, we intended to identify distant metastatic pattern of inflammatory breast cancer. And the SEER database contained metastatic information including bone, brain, liver, lung, and distant lymph nodes (DL), which could basically cover extensive metastatic sites of IBC.

Flowchart of patient selection in this study. 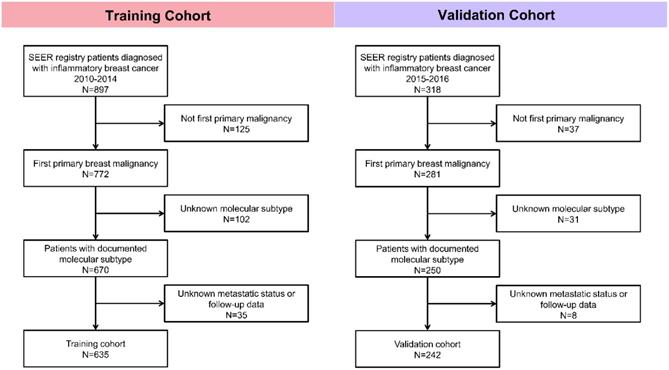 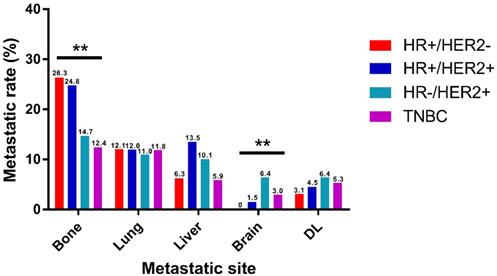 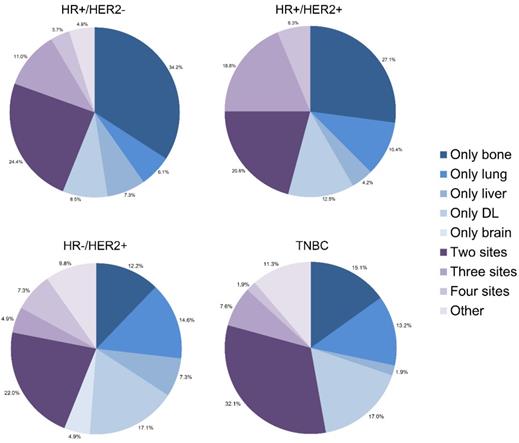 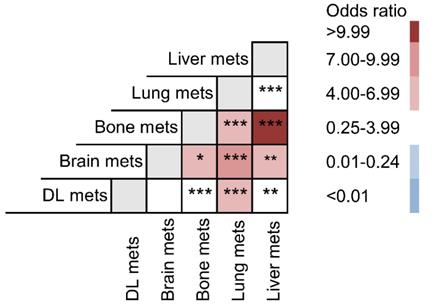 Kaplan-Meier curves of cancer specific survival in patients according to metastatic status. 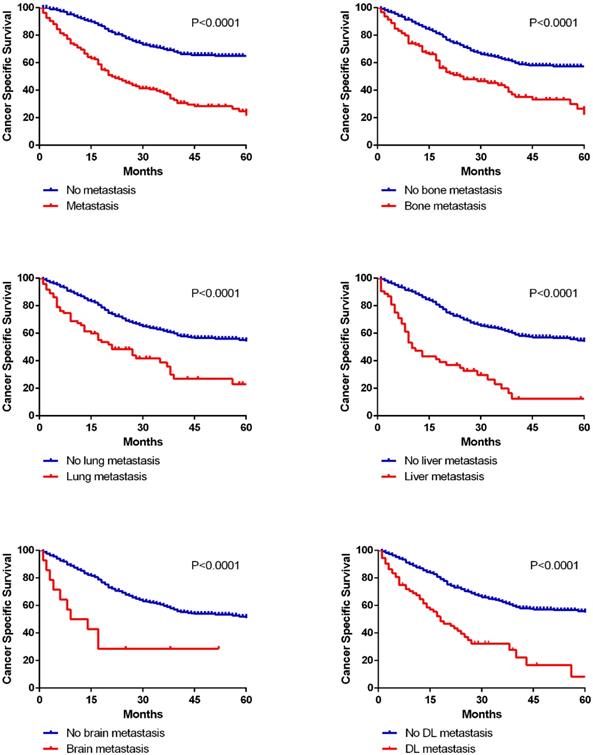 Multivariate analyses of OS and CSS according to metastatic organs.

Inflammatory breast cancer shows unfavorable prognosis mainly attributable to early distant metastasis [14, 15]. It is important to have a clear understanding of its metastatic pattern. In our research, the following three points were mainly elaborated: (1) Elucidating the distribution of single-organ metastases in IBC; (2) Clarifying the combined metastatic patterns and tendency of co-metastases; (3) Analyzing prognostic values of single-organ and bi-organ metastases. To our knowledge, this SEER-based research is the first comprehensive, large-cohort research focusing on the distal metastatic pattern of IBC and considering different molecular subtypes as separate entities. And we hope our results can be beneficial for treatment selection and clinical research.

As previous studies mentioned, the prevalence in breast cancer patients developing bone metastasis is extremely high. That is to say, bone is the most common metastatic lesion in both IBC and non-IBC patients [16, 17]. Consistent with the conventional views, we found that bone and brain were the most and least common metastatic organs for all subtypes of IBC, separately. Several differences existed among different molecular subtypes in bone and brain, but not in lung, liver or DL. Incidence rate of bone metastasis was highest in HR+/HER2-, followed by HR+/HER2+, HR-/HER2+ and lowest in TNBC.

According to the baseline clinical characteristics, parameters including marital status, race, tumor size, and regional lymph node invasion showed significant differences between the metastatic group and non-metastatic group. Compared to non-metastatic group, metastatic group tended to have higher rate of unmarried status, lower incidence of white race, larger tumor size and higher frequency of regional lymph node invasion. As for therapies, metastatic patients received less surgery, chemotherapy or radiation therapy than non-metastatic patients. In consideration of these clinical parameters that could have influence on patient survival, we performed multivariate Cox regression models for further investigation. After adjusting for demographic, clinicopathological and therapeutic variables, we suggested that all single-organ metastases were independent risk factors for prognosis. 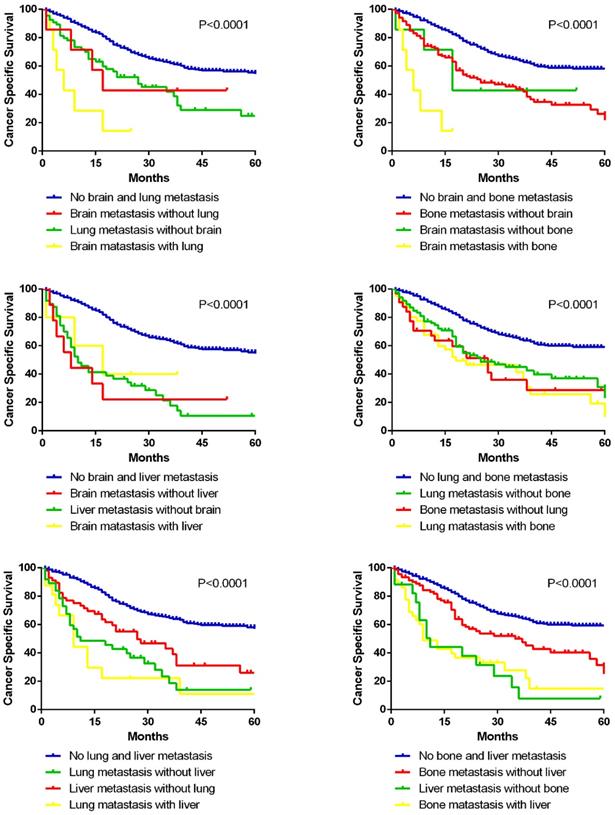 By far, previous studies have not focused on the combined metastatic patterns of IBC. Our findings showed that not any two metastatic organs were randomly combined for bi-site metastasis. For instance, liver metastasis had a preference for co-metastasizing with bone and brain. And lung was a common co-metastatic site for brain, bone and DL. Although the sequential information of co-metastatic organs was not provided by the SEER database, knowing the tendency of metastatic combinations would be beneficial for risk assessment and diagnostic screening in IBC patients with advanced stage. Additionally, we also analyzed the prognostic significance of different combinations with bi-organ metastases. However, not all bi-organ metastases had an unfavorable prognosis than the single-site metastases, which could be challenging for the conventional views. It could be partially explained that single-site metastasis may have already resulted in a fatal ending in some circumstances. And we hope further investigations could be conducted to better answer this phenomenon.

As far as we know, this cohort study is among the innovative work to summarize metastatic patterns of different molecular subtypes of IBC. As a retrospective research, several potential limitations need to be mentioned. First, since SEER database collected detailed information on distal metastatic site and molecular subtype from 2010, we only enrolled patients diagnosed with IBC between 2010 and 2016. Second, metastatic data extracted from the database is restricted to five organs (bone, lung, liver, brain and distant lymph node) and other distal sites are unclear. However, these five sites accounted for more than 90% of metastatic lesions and only a relatively small proportion of other sites may be ignored. Third, the metastatic information in this study was synchronous metastasis at the time of diagnosis, meaning that metachronous metastasis was not included. Briefly, on the basis of single-organ and bi-organ metastatic patterns, we recommend that the primary neoplasm and the first metastatic lesion could be taken into consideration for predictive prognostic model and optimal treatment choice.

In conclusion, in this SEER-based cohort study, we illustrated the metastatic patterns in different subtypes of IBC. Bone and brain were the most and least common metastatic organs for all subtypes of IBC, separately. Bi-organ metastasis occurred most frequently among all combined metastases. Several combinations, such as liver and bone, lung and brain, were preferential for bi-organ metastasis. And all single organ distal metastases were independent risk factors for prognostic prediction (adjusting for molecular subtype, therapy and other clinicopathological variables). Therefore, our results would provide more information for future study design and clinical decision.