Background: FAS is a classical death receptor involved in the FAS/FAS ligand (FASL) apoptosis pathway and plays a role in anti-tumor activity. Some studies have recently reported that FAS can serve as an oncogene that promotes tumor proliferation and maintains the stemness of tumor cells. Hence, its prognostic value in malignancies remains controversial.

Methods: we assessed the prognostic value of FAS mRNA in several types of tumors by online platforms including Kaplan-Meier Plotter and SurvExpress.

FAS encodes the classical death receptor which belongs to the tumor necrosis factor receptor (TNFR) family. It is activated when bound with FASL (FAS ligand), and then the cytoplasm side tail of FAS recruits FAS-associated death domain (FADD), pro-caspase-8/10 and a negative regulator, the cellular FADD-like interleukin-1 beta converting enzyme (FLICE; caspase-8) inhibitory protein (c-FLIP). These elements together compose the death inducing signaling complex (DISC), which activates the downstream caspases and induces apoptosis [1-3]. It has been reported that FAS plays a positive role in inhibiting tumor cell progression [4, 5]. FAS has been identified as a biomarker for breast cancer with better prognosis [6, 7], acute myeloid leukemia (AML) [8], urothelial cancer [9] and lung cancer [10, 11]. Furthermore, FAS agonist antibody significantly decreased the progression of the tumor in the mice model with transplanted with human B cell tumors [5]. Targeting the FAS/FASL signal pathway via the FAS agonist antibody or FASL fusion is a promising therapeutic strategy [4].

Recently, FAS has been reported to be associated with tumor cell proliferation, invasion and migration. In addition, resistance of FAS associated apoptosis exists universally in many tumor cells. Then activated FAS pathway promotes the growth or metastasis of the tumor rather induces apoptosis [12, 13]. The absence of FAS protein has been reported to be correlated with worse clinicopathological parameters in non-small-cell lung cancer (NSCLC)[14] and hepatocellular carcinoma[15].

Hence, the prognostic value of FAS in malignancies remains controversial because of the paradoxical role of FAS. Here we first investigated the association between FAS mRNA expression and prognosis in different tumors based on KM-Plotter and other online databases. Additionally, we tried to study the potential role of FAS in predicting the efficiency of target drugs including vemurafenib, dabrafenib, crizotinib, carbozantinib, erlotinib and afatinib.

We estimated the association between FAS mRNA expression and prognosis in several malignancies using the following two databases: The Kaplan-Meier Plotter (http://www.kmplot.com//) [16] and SurvExpress (http://bioinformatica.mty.itesm.mx/SurvExpress) [17].

The recommended probe (204781_s_at) was chosen for evaluation. The survival curves and log-rank p values were obtained, and four types of malignancies including breast cancer, lung carcinoma, ovarian cancer and gastric cancer were investigated. Patients were divided into two groups by median expression level of FAS mRNA. The median expression levels of FAS in each type of tumor were also provided in Table S3.

The probe of FAS with original (quantile-normalized) data was evaluated, and different probes for FAS were averaged per sample. The samples were divided by the median FAS mRNA expression. The hazard ratios with log-rank p values were calculated. The pooled results of datasets for each type of tumor were estimated by meta-analysis. The clinical data of tumors obtained from SurvExpress contained acute myeloid leukemia, pancreatic cancer, glioblastoma, colorectal cancer, head and neck carcinoma, hepatic cancer and renal carcinoma.

The values of FAS mRNA expression (transcript log 2 intensities) in a panel of 60 diverse human cancer cell lines (NCI 60) and the activity values of several drugs targeting lung cancer, pancreatic cancer and gastric cancer were downloaded from the Cell Miner 60 website (https://discover.nci.nih.gov/ cellminer/). The original data of drug sensitivity was downloaded as the mean-centered log10 values of 50% growth inhibition. The value of FAS expression and drugs sensitivities were transformed to Z-scores (standard scores). The detailed process of this transformation was provided below; the value of the FAS expression and the drug sensitivities were obtained by subtracting the means of each and dividing them by the standard deviations. A linear regression analysis was used to estimate the association between FAS mRNA expression and the sensitivity of drugs. The coefficient of determination (R squared; R^2), regression coefficient (RC) and the p value were used to estimate the correlation and they were calculated using SPSS version 22.

Prognosis of FAS expression in malignancies

We examined the prognostic values of the FAS mRNA expression in several malignancies including breast cancer, gastric cancer, non-small-cell lung cancer, pancreatic cancer, acute myeloid leukemia (AML), renal carcinoma, head and neck carcinoma, hepatic cancer, ovarian cancer, colorectal cancer and glioblastoma using the KM-Plotter and SurvExpress online databases. Multiple parameters are used to assess the prognosis of malignancies including overall survival (OS), relapse-free survival (RFS) and progression-free survival (PFS). OS means the time from the start of randomization to the death of any cause. RFS refers to the time from the start of randomization to the recurrence of the disease or the death of the patient due to disease progression. PFS indicates the time from the subject entering the trial to disease progression or died. The OS of different malignancies is shown in Figure 1 and Table S1. The median expression level in each type of tumor and a detailed distribution of the FAS mRNA expression are provided in Table S3. The detailed information of datasets that used for analyzing the prognostic value of FAS in each type of malignancy is provided in Table S4.

We performed a meta-analysis of 3 datasets from SurvExpress to assess the prognostic significance of FAS in AML. The results showed that FAS mRNA in AML was related with a worse OS (HR: 1.57 [1.02, 2.41], p=0.04, n=256 cases). There was no statistical heterogeneity in the meta-analysis (p=0.22) between different datasets (Figure 2).

The summary of the association between FAS mRNA expression and OS in different types of malignancies. 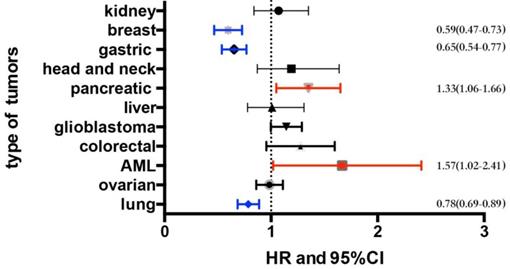 Other types of malignancies

The meta-analysis of three datasets from SurvExpress about the HR and 95% confidence interval for OS of AML patients. 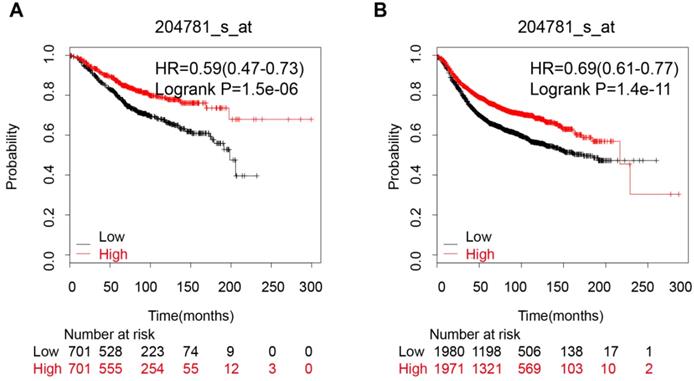 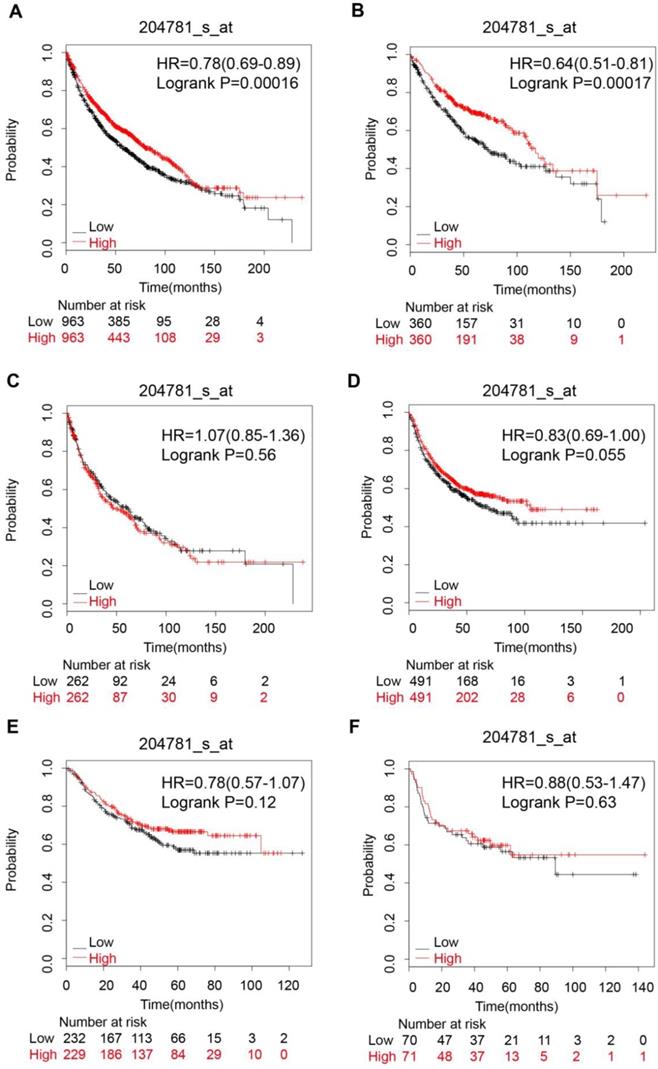 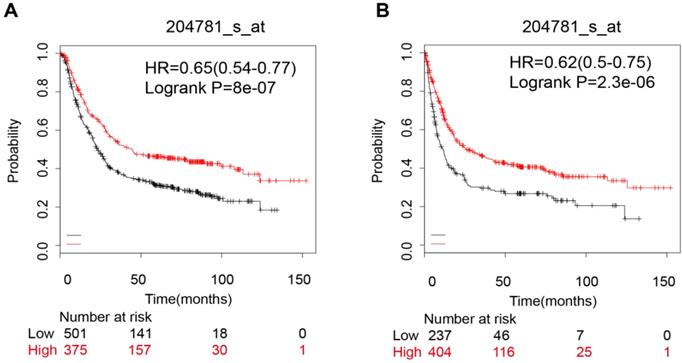 We analyzed the correlation between FAS mRNA expression and the sensitivity of different tumor cell lines to target drugs for NSCLC (vemurafenib, dabrafenib, crizotinib and carbozantinib), pancreatic cancer (erlotinib) and breast cancer (afatinib). We observed that FAS mRNA expression was correlated with the sensitivity of tumor cells to erlotinib (R^2=0.1; p=0.015; RC=0.32) (Figure 7C) and carbozantinib (R^2=0.068; p=0.047; RC=0.28) (Figure 7D), but not related with vemurafenib, dabrafenib, crizotinib and afatinib (Figure 7A,B,E,F).

FAS, which belongs to TNFR/TNF family, was known as the trigger of the classical apoptosis pathway. It is an important factor that activates the downstream caspases and initiates the process of apoptosis [1-3, 18]. It was reported that FAS protein was related to a better prognosis in breast cancer, acute myeloid leukemia, urothelial cancer and lung cancer. However, many studies have revealed that FAS-associated apoptosis resistance existed in most types of tumors [19, 20]. In addition, FAS played roles in tumor growth, invasion and metastasis in addition to inducing apoptosis [12, 21]. Therefore, the prognostic value of FAS in malignancies remains controversial. Although previous studies have analyzed the prognostic value of FAS, the sample size was small. In this study, we systematically investigated the association between FAS mRNA expression and prognosis in different tumors based on meta-analysis integrating a large number of microarray data. We found that FAS mRNA expression was correlated with better survival in breast cancer, gastric cancer and lung cancer, but it was associated with a worse prognosis in pancreatic cancer and AML; no relationship was found with kidney cancer, head and neck cancer, hepatic cancer, glioblastoma, colorectal cancer or ovarian cancer. However, our findings were based on the bioinformatics analyses of publicly available datasets. More data from clinical studies are warranted to verify these results. 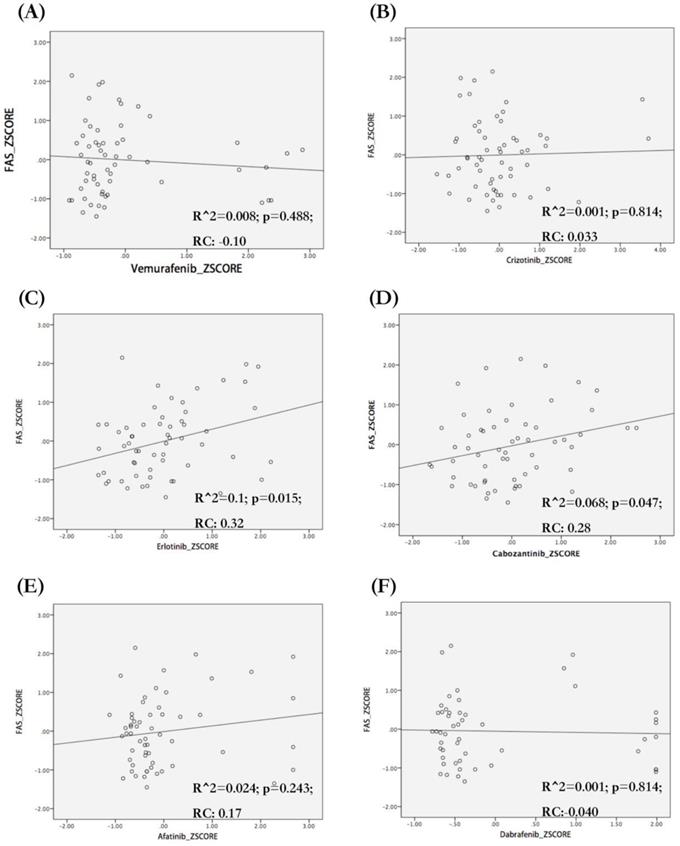 Our study found that the cases with high expression of FAS had a significant better OS and RFS in breast cancer. Previous studies showed that the group that expressed FAS protein tended to have a longer DFS, less recurrence, better nodal status and smaller tumor size [22, 23]. The lymph node negative cases were more likely to be FAS positive (70% versus 30%) [6]. Our analysis of mRNA levels was also consistent with these results.

It has been reported that FAS on cell membranes decrease generally in NSCLC and mainly exist in the cytoplasm [11]. FAS associated phosphatase 1 (FAP-1) can interact with the C-terminal of FAS and leave FAS in the cytoplasmic cytoskeleton [24].The loss of the cell membrane FAS was associated with advanced stages and lower survival rates [10, 11, 14]. On the other hand, it was also found that stage III NSCLC patients who expressed FAS proteins had longer survival [25]. The FAS in the cytoplasm was suggested to be a reason for apoptosis resistance [26]. In this study, we found that the expression of FAS was associated with better OS in lung adenocarcinoma but not in lung squamous cell carcinoma. The FAS also only shows the prognostic value in females and the group with no smoking history. Coincidentally, it has been identified that female lung adenocarcinoma patients are more likely to be non-smokers[27]. It is still unknown why FAS only has a prognostic value in lung adenocarcinoma patients but not in lung squamous cell carcinoma patients.

It has been reported that the FAS-associated apoptosis resistance also existed in AML cells [8]. Others have reported that the FAS positive expression group had a longer RFS after complete remission (CR), but it was not correlated with OS in M1 to M6 AML patients. However, no connection was showed between the FAS expression and CR rate [31]. This study was based on unselected AML patients, and the follow-up did not begin after CR. We suggest that high expression of FAS mRNA in unselected AML patients is associated with worse OS.

Previous studies have indicated that the FAS transcriptional expression was higher in metastases than it in the primary lesion of pancreatic ductal adenocarcinoma. The high FAS expression was accompanied by up-regulation of epithelial-mesenchymal transition genes, which were responsible for maintaining stemness and initiating metastasis [32]. Furthermore, FAS can induce pro-inflammatory responses, which resulted in tumor cell proliferation, invasion and metastasis[33]. Therefore, FAS expression is significantly correlated with worse prognosis. In this study, we also found that the high expression of FAS mRNA was associated with a worse prognosis.

Surprisingly, we found that the tumor cells with higher FAS mRNA expression tend to be more sensitive to cabozantinib and erlotinib. Cabozantinib is an oral tyrosine kinase receptor inhibitor, which is recommended for advanced NSCLC patients with RET rearrangement. It was reported that the FAS/c-Met interaction can reduce the formation of DISC. The inhibition of c-Met may up-regulate the DISC and activate the FAS-associated apoptosis pathway expression[34]. The AXL can also interact with the TNFR and block the recruitment of caspase-8 to the DISC. These findings can partially explain the predictive value of FAS for cabozantinib[35]. Erlotinib is an epidermal growth factor receptor (EGFR) tyrosine kinase inhibitor (TKI) and has been widely used in EGFR mutant advanced NSCLC patients [36] and advanced pancreatic cancer patients [37]. In fact, the EGFR inhibitor can up-regulate the FAS-associated apoptosis without affecting the expression of FAS. The inhibition of EGFR could down-regulate the c-FLIP expression [38]. Overall, FAS seems to be a potential biomarker for anticipating the efficacies of cabozantinib and erlotinib. Deeper studies are warranted to rigorously investigate the underlying mechanisms.

In summary, FAS has a dual and complicated role in tumors, including both anti-cancer and cancer promotion functions. FAS mRNA expression can be used as a prognostic marker in certain cancers including breast cancer, gastric cancer, lung cancer, pancreatic cancer and AML. It also has the potential to be a sensitive marker for cabozantinib and erlotinib.