Background: Multiple myeloma (MM) is one of the most common incurable malignancies in malignant plasma cell disease. EPB41L4A is a target gene for the Wnt/β-catenin pathway, which is closely related to the survival of multiple myeloma cells. However, there is currently no research report on the prognostic significance of the EPB41L4A gene in MM.

Conclusions: We found that the high expression of EPB41L4A predicts good survival level in MM.

Multiple myeloma (MM) is one of the most common incurable malignancies in malignant plasma cell disease.(1) It is characterized by malignant proliferation of monoclonal plasma cells in the bone marrow and secretion of a large number of monoclonal immunoglobulin.(2) The main clinical manifestations were infection, anemia, immunosuppression, bone destruction and renal failure.(3) In recent years, the incidence of MM has gradually increased; accounting for about 1% of all cancers, and about 10% of hematopoietic tumors.(4) The median overall survival can be several months or more than ten years.(5) At present, the specific mechanism of plasma cell disorders and progression to symptomatic MM disease has not been fully elucidated. However, there has been some progress in the study of the staging of MM disease, which can predict the prognosis of patients. In the early years, staging of tumors was performed by using the Durie-Salmon staging system.(6) In recent years, the International Myeloma Working Group (IMWG) has proposed an international staging system (ISS) for staging multiple myeloma with β2-MG and serum albumin levels.(7) It helps to predict the prognosis of the disease. With the development of molecular diagnostic techniques, the IMWG proposed the revised International Classification System (R-ISS) in the original ISS staging system in 2015.(8, 9) The treatment options of MM vary, but at present it is chemotherapy-based and autologous stem cell transplantation (ASCT).(10, 11) At present, some studies have shown that some genes can predict the clinical outcome of MM patients. For example, 1q21 amplification is the most common chromosomal mutation in MM patients and indicates a poor prognosis.(12) And two GEP scores for MM patient classification and prognosis (based on the Arkansas GEP70 score and the HOVON SYK92 score) have been commercialized. We can still find some "new genes" that can also predict the clinical outcome of MM patients. The "new gene" can be integrated with genes that have been found to predict the prognosis of MM patients to better predict the prognosis of MM patients, and can also provide a reference for opening up a new therapeutic pathway.

EPB41L4A (erythrocyte protein band 4.1-like 4a, also called Nbl4) which is a member of the band FERM (Four-point-one, Ezrin, Radixin, Moesin) protein superfamily were discovered in almost all cellular organism in molecular ecology, especially high expressions in brain, liver, thymus, and peripheral blood leukocytes.(13) The protein superfamily members are important regulators of embryonic development. They are a group of membrane-associated proteins whose major biological functions are involved in the regulation of cytoskeletal rearrangements, intracellular trafficking and signal transduction. Studies have suggested that mutations in several genes in the FERM protein family are associated with human cancers and blood cell diseases.(14) Studies have shown that EPB41L4A is a target gene for the Wnt/β-catenin pathway and is associated with cell polarity or proliferation. (13)Beta-catenin is a key regulator of cell proliferation and is frequently mutated in various human cancer types. Recent advances in cancer research have revealed that β-catenin plays a role in intercellular adhesion and Wnt signaling pathways and is also a major player in carcinogenesis in various tissues (colon, liver, ovary, skin, and blood);(15-18) the Wnt signaling pathway plays an important role in regulating cell proliferation, migration, differentiation, and stem cell self-renewal, which is closely related to the survival of multiple myeloma cells.(19)

Only a few studies have shown that EPB41L4A has genetic susceptibility to colon, nerve/brain muscle and congenital keratosis. (20) However, there is currently no clinical prognostic study on the EPB41L4A gene in any types of cancer. The study integrates multiple data from MM to achieve three goals. First, determine the clinical relationship between EPB41L4A and MM. Second, to understand whether EPB41L4A acts on MM is related to the cell cycle. Finally, understand the relationship between this gene and the recurrence before and after treatment.

Gene expression of each dataset was calculated by RMA method (robust multiarray averaging). The relative RNA expression value of each gene was log-transformed using log2. We analyzed expression of each gene and the survival (EFS and OS) using survcomp package (hazard.ratio function) with the GSE24080 datasest. Hazard ratio and P-value was estimated through Cox regression model. EPB41L4A gene is in the high rank among all genes by ranking with the P-value.

By using the default parameters of the DAVID tool,(28) different expressed genes between EPB41L4A high group and EPB41L4A low group was analyzed of the pathway enrichment. The results were ranked by the P value (-log10).

Since EPB41L4A is low expressed in proliferative patients, we further analyzed the relationship between the expression level of EPB41L4A and survival. We compared event-free survival (EFS) and overall survival (OS) in 559 MM patients (dataset GSE24080) with the EPB41L4A-high group and the EPB41L4A-low group. We found that the high expression of EPB41L4A predicts significantly good EFS (P < 0.0001, log-rank test, Figure 2A) and OS (P < 0.0001, log-rank test, Figure 2A). We also analyzed the relationship between EPB41L4A expression level and survival through an independent dataset (dataset GSE9782, total 264 samples). Similarly, we found that EPB41L4A-high group had better OS (P < 0.0001, log-rank test, Figure S4) than EPB41L4A-low group. In addition, we also further analyzed the expression of this gene in the early (ISS I) and mid-late (ISS II and III) of MM patients with OS and EFS. The results showed that the expression level of EPB41L4A is closely related to OS and EFS in various stages of the disease. Especially in the early stage of the disease, the expression level of the gene has more significant difference in the survival period (ISS I: EFS P = 1e-04, OS P = 0.00036; ISS II and III EFS P = 0.00048, OS P = 0.0064; log-rank test; Figure 2B and Figure S5). 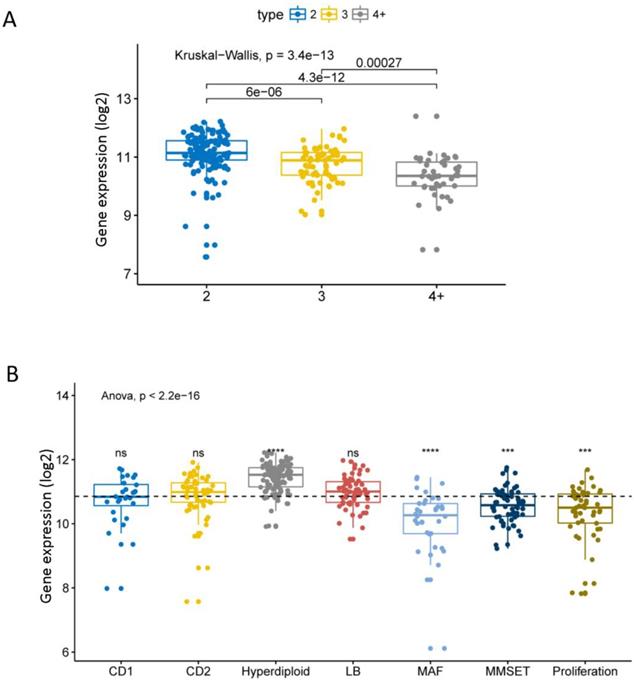 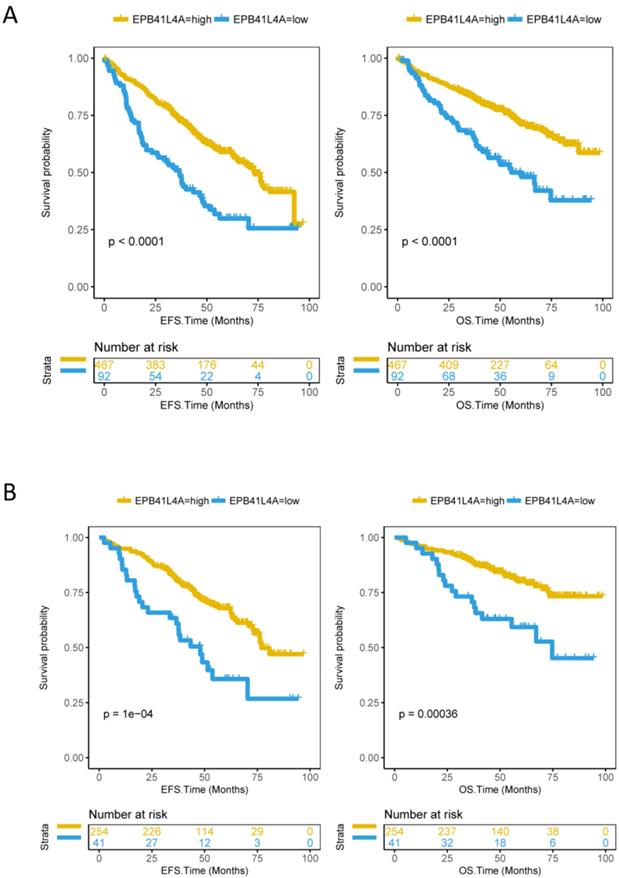 EPB41L4A expression as an independent prognostic factor in MM patient 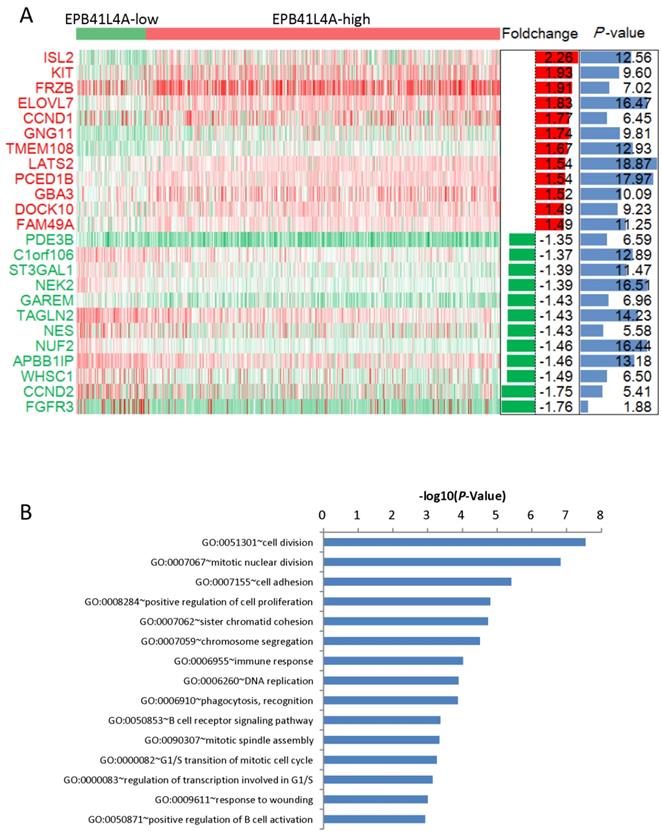 The relationship between EPB41L4A and MM recurrence 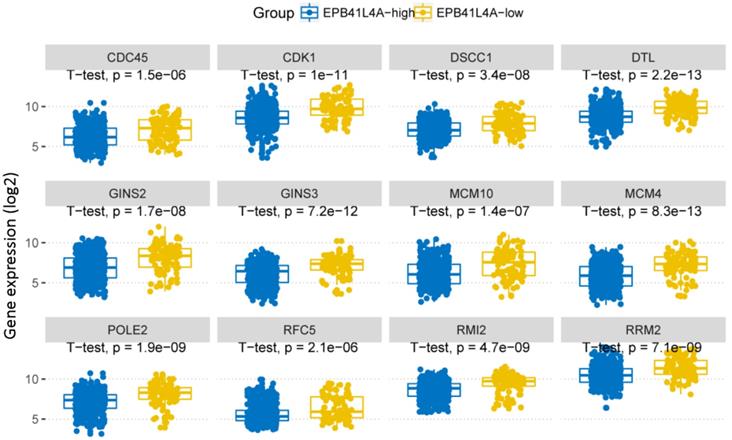 The relationship between EPB41L4A expression and therapeutic response

As the understanding of the pathogenesis of MM patients continues to improve,(29) the heterogeneity of the disease becomes more and more obvious. These "high-risk" patients often have one or more characteristics of cytogenetic abnormalities, but these abnormalities do not always lead to poor prognosis.(30) EPB41L4A is a key target of Wnt signaling pathway,(13) and Wnt signaling pathway can regulate cell proliferation and differentiation,(19) and is related to renal cell carcinoma complicated with complex of colon, nerve/brain muscle, congenital keratoses and tuberous sclerosis.(31) It is closely related to the survival of MM patients.(19) At present, there is no research report on prognostic significance and biological implication of EPB41L4A gene in MM. Therefore, by integrating several datasets, we found that the expression level of EPB41L4A is inversely proportional to the MM stage, and the prognosis of MM patients with high expression of EPB41L4A is better.

A number of previous studies have shown that the long non-coding RNA EPB41L4A-AS1 and the long non-coding RNA EPB41L4A-AS2 are associated with a variety of cancers. For example: 1) EPB41L4A-AS1 is a p53-regulated gene. And the consumption of EPB41L4A-AS1 in tumor treatment can increase the sensitivity of tumors to glutaminase inhibitors.(32) 2) EPB41L4A-AS1 plays an important role in the diagnosis and prognosis evaluation of various cancers including cervical cancer, liver cancer, breast cancer, bladder cancer, glioblastoma, and colorectal cancer.(33-35) That is, the low expression of EPB41L4A-AS1 is associated with a low survival rate of these cancer types. 3) EPB41L4A-AS2 is an important target for anti-metastasis treatment in patients with head and neck squamous cell carcinoma (HNSCC).(36) It can also effectively evaluate the prognosis of anti-metastasis treatment in patients with HNSCC. 4) Long non-coding RNA EPB41L4A-AS2 can inhibit cell proliferation, invasion and promote apoptosis of hepatocellular carcinoma, renal cancer, non-small cell lung cancer and breast cancer. (37-40) However, there is currently no clinical survival study on the EPB41L4A gene in any types of cancer. There are only a few studies related to genetics of the EPB41L4A. For example: 1) Studies have revealed genetic alterations in two patients with tuberous sclerosis complex-associated renal cell carcinoma (TSC-RCC) by whole exome sequencing (WES). However, only one patient with TSC-RCC was found to have a genetic alteration in EPB41L4A.(31) 2) It was found by WES that EPB41L4A has genetic susceptibility to colon, nerve/brain muscle and congenital keratosis.(20) To understand the role of EPB41L4A in cancer, studies have explored the role of EPB41L4A in cell lines. This study found that when β-catenin was depleted in SW480 cells, the RNA expression of EPB41L4A was significantly reduced (SW480 cells are colorectal cancer cell lines).(41) To the best of our knowledge, we have not found any study about the clinical prognostic relationship between EPB41L4A and tumor. In our study, we obtained 1956 samples by integrating 7 datasets and found a relationship between the expression level of EPB41L4A and the clinical prognosis of MM.

However, our research has some shortcomings. The detailed mechanism of EPB41L4A in MM is not deep enough conducted. Multiple markers were not combined to observe clinical predictions of MM patients. There is also a lack of prospective studies to demonstrate whether the expression level of EPB41L4A can alter clinical decisions for early treatment.

3. Kyle RA, Rajkumar SV. An overview of the progress in the treatment of multiple myeloma. Expert review of hematology. 2014;7(1):5-7