Background: Lung cancer is the most common cause of death from cancer worldwide and recent studies have revealed that microRNAs play critical roles to regulate lung carcinogenesis. microRNA-129-5p (miR-129-5p) has been reported to regulate cell proliferation and invasion in lung cancer, but its role in lung cancer apoptosis remains unknown.

Lung cancer is the leading cause of cancer-related death worldwide, accounting for more than 1.8 million new cases and almost 1.6 million estimated deaths in 2012 [1]. In China, lung cancer is the most commonly diagnosed cancer and the leading cause of cancer-related death, which cause about 6 million deaths in 2015 [2]. Lung cancers are broadly classified into two types: non-small-cell lung cancer (NSCLC) and small-cell lung cancer; NSCLC accounts for the majority of all lung cancer cases, which comprise three major histological subtypes: adenocarcinoma, squamous cell carcinoma and large-cell carcinoma [3].

microRNAs (miRNAs), a kind of small endogenous noncoding RNAs, have been clearly demonstrated to suppress target messenger RNA (mRNA) expression post-transcriptionally by base-pairing with 3'-untranslated region (3'-UTR) of their targets. Differential expression of miRNAs has been revealed between lung cancer and normal tissues and is involved in the progression of lung cancer [4-6].

Aberrant expression of miR-129 has been detected in various types of human cancers and the validated target genes are involved in cancer-related biological processes such as cell proliferation, apoptosis, cell cycle, and metastasis [7-11]. Accumulating evidence indicates that miR-129 could play a dual role in tumorigenesis. miR-129 plays a role as tumor suppressors with decreased expression in various tumors [12-16]. However, the role of miR-129 in tumorigenesis remains largely elusive [17].

A549 and NCI-H1299 (H1299) cell lines purchased from the National Platform of Experimental Cell Resources for Sci-Tech (Beijing, China). Both A549 and H1299 cells were cultured in Dulbecco's modified Eagle's medium with 10% fetal bovine serum, 100 IU/mL penicillin, and 100 μg/mL streptomycin at 37°C in a humidified 5% CO2 atmosphere. The medium was changed at alternate days and the cells were split before they reached 100% confluency.

miR-129-5p mimics and miR-129-5p inhibitors were synthesized by Genepharma group (Shanghai, China). The full-length 3'UTR of YWHAB was subcloned into the pIS0 luciferase plasmid to generate pIS0-YWHAB-3'UTR [26]. Mutant construct of YWHAB-3'UTR, named pIS0-YWHAB-3'UTR-m, which carried a substitution of three nucleotides within the core binding sites of YWHAB-3'UTR, was conducted using mutant PCR primers. Primers used in this study are shown in Supplementary Table 1. Lipofectamine 2000 (Life Technologies Corporation, Grand Island, NY, USA) was used for transfection of DNA plasmids and oligonucleotides according to the manufacturer's protocol.

We used TRIzol reagent (Life Technologies Corporation) to extract total RNA from the cultured cells. Total RNA was used to synthesize cDNA with a cDNA Synthesis Kit (FastQuant RT Kit, TianGen, Beijing, China). qRT-PCR was performed using SuperReal PreMix Plus (TianGen) according to the manufacturers' recommendations. The sequences of all primers used for qRT-PCR are listed in Supplementary Table 1. All experiments were performed in triplicate. β-actin and U6 expression were used for normalization of the expression of mRNA and MiR-129-5p, respectively. Relative expression levels were determined using the 2-ΔΔCt method.

A549 and H1299 cells were cotransfected with pIS0-YWHAB-3'UTR or pIS0-YWHAB-3'UTR-m and miR-129-5p mimics, 48h after transfection, firefly and Renilla luciferase activities were measured according to the Dual-Luciferase Reporter Assay protocol (Promega, Madison, WI, USA). The Renilla luciferase activities were used to normalize transfection efficiency. Experiments were performed in triplicate.

Cells transfected with negative control or miR-129-5p mimics/inhibtors for 24 h were starved overnight and then treated with VP16 (Sigma-Aldrich) for 48 h. The FCM assay was performed using the Annexin V FITC Apoptosis Detection Kit (BD Biosciences, San Jose, CA, USA) according to the manufacturer's instructions.

A total of 5 series (GSE) in the GEO database were extracted for the present study, which consisted of 320 lung cancer samples and 319 normal controls. The expression level of miR-129-5p was significantly downregulated in patients with lung cancer in all the 5 GEO datasets (Figure 1A-1E). Compared with the non-cancerous controls, the miR-129-5p lung cancer expression profiles were significantly downregulated in GSE18692, GSE36681, GSE56036, GSE18805 and GSE14936 (P<0.05). A significant correlation was found between the level of miR-129-5p and over survival of the patients with lung cancer (Figure 1F). 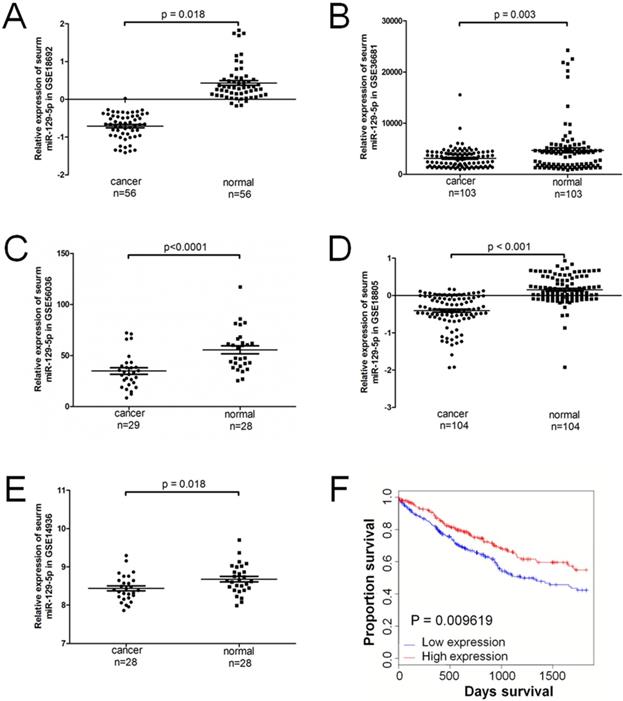 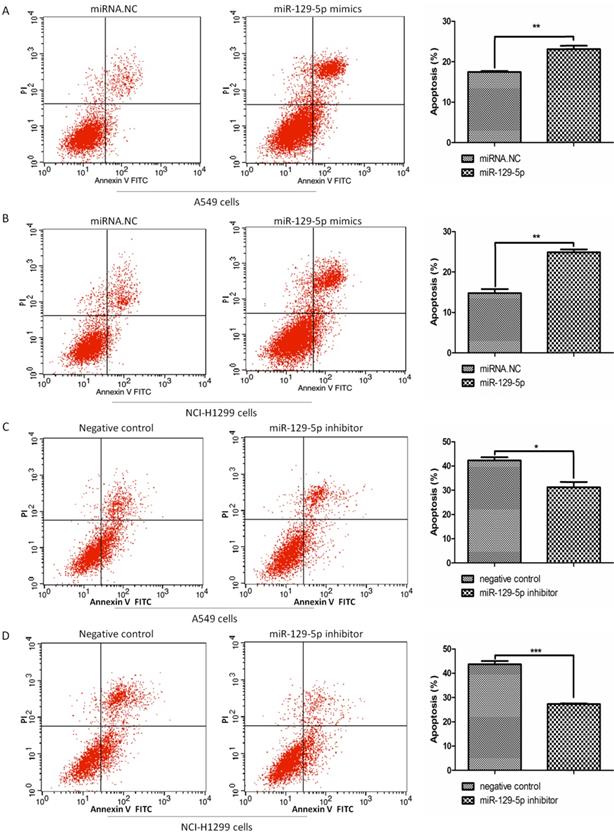 To reveal underlying mechanism by which miR-129-5p regulates cell apoptosis in lung cancer, we next searched for potential target genes of miR-129-5p in TargetScan (targetscan.org). The searching results predicted YWHAB as a candidate target of miR-129-5p. The 3'UTR of the YWHAB mRNA contained a complementary site for the seed region of miR-129-5p (Figure 3A upper panel). Homology search showed that the miR-129-5p targeting sequence at nucleotides 1949-1956 of the YWHAB-3'UTR was highly conserved among 13 species (Figure 3A bottom panel). To further validate whether miR-129-5p would bind directly to the 3'UTR of YWHAB, luciferase reporter vectors containing wide type (WT) 3'UTR or mutant 3'UTR target sequences were constructed. These constructs were cotransfected into A549 and H1299 cells with miR-129-5p mimic or its negative control for performing luciferase reporter assay (Figure 3B). Results demonstrated that miR-129-5p could repress the expression of reported gene containing WT 3'UTR but not the mutant 3'UTR (Figure 3B). The mRNA and protein levels of YWHAB in A549 and H1299 cells were also determined. The results showed that miR-129-5p reduced YWHAB expression at the mRNA and protein levels (Figure 3D and 3E). Collectively, these findings suggest that YWHAB is a direct downstream target of miR-129-5p. 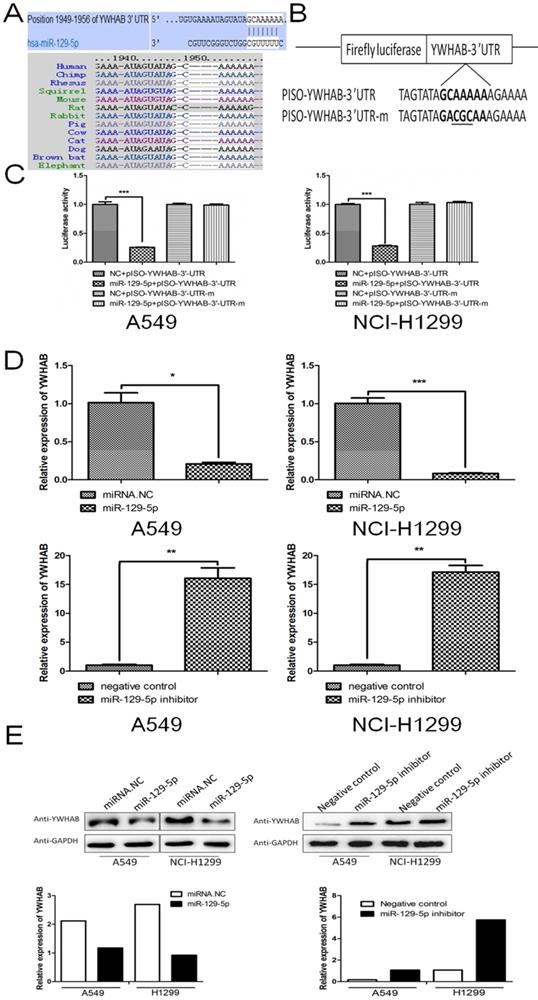 To confirm that YWHAB is a functional target of miR-129-5p, A549 and H1299 cells were cotransfected with a negative control miRNA (NC) or miR-129-5p mimic, or a plasmid expressing YWHAB. As shown in Figure 4A, fewer apoptotic cells were detected after cotransfection with pCDNA3-YWHAB and miR-129-5p mimics compared to miR-129-5p alone. The same phenomenon was also observed in H1299 cells by FCM (Figure 4B). These results were consistent with the effects of miR-129-5p overexpression, indicating that miR-129-5p regulates lung cells apoptosis by directly targeting YWHAB. 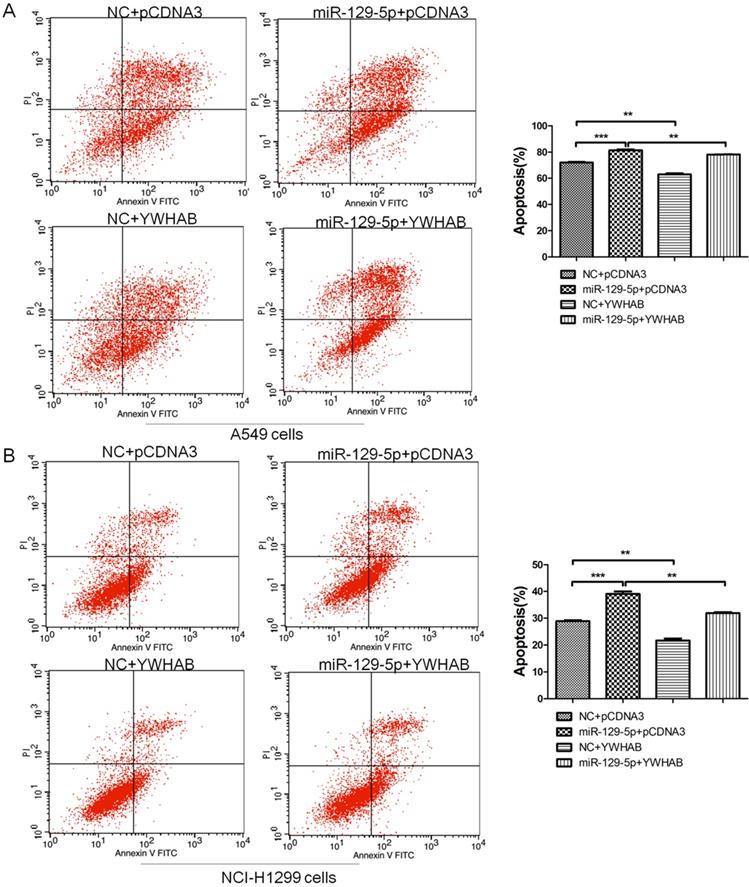 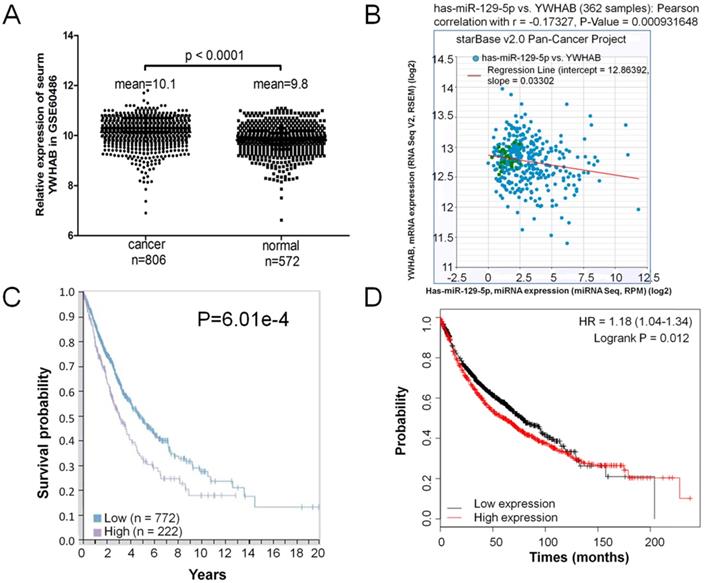 A GEO database (GSE60486) was extracted for the present study, which consisted of 806 lung cancer samples and 572 normal controls. The expression level of YWHAB was significantly upregulated in patients' serum with lung cancer compared the normal control (Figure 5A). The correlation of miR-129-5p and YWHAB in lung cancer tissues was also determined. With the log10-transformed data, the Pearson correlation analysis showed a significant negative correlation between miR-129-5p and YWHAB (R=-0.173, p=0.0009) (Figure 5B). We then explored correlation analyses based on mRNA expression levels of YWHAB in lung cancer tissue and the clinical outcome (survival) of the patient using a recently published interactive open-access database (www.proteinatlas.org/pathology). As expected, increased expression of YWHAB is associated significantly with an unfavorable prognosis (survival) in patients with lung cancer (Figure 5C). We also performed Kaplan-Meier survival analysis of YWHAB with an online tool (http://kmplot.com/analysis/). The results showed that higher YWHAB expression was associated with a worse overall survival for patients with lung cancer (Figure 5D).

In this study, five microarray datasets from GEO public database was used to analysis expression of miR-129-5p in lung cancer. Our analysis of publically available databases revealed that miR-129-5p is significantly downregulated in tumor tissue compared with matched adjacent normal tissues. These findings point to an important role for changes in miR-129-5p expression during lung cancer progression.

This work was funded by the National Natural Science Foundation of China No. 81501995.