LncRNA is a non-coding RNA molecule longer than 200 nucleotides [3]. LncRNAs involved in tumor cell proliferation, apoptosis, invasion and metastasis[4]. However, they do not encode proteins[4].

Previous studies have reported that LINC00673 can promote epithelial-mesenchymal transition (EMT), proliferation and metastasis in thyroid carcinoma [5]. Overexpression of LINC00673 promotes invasion and metastasis which associated with a poor prognosis in tongue squamous cell carcinoma [6]. Lin et al. showed that the rs7214041 gene site of LINC00673 is highly correlated with the incidence of pancreatic cancer [7]. LINC00673 plays an important role in maintaining cellular homeostasis, and its germline variability affects pancreatic cancer susceptibility.

The sequences of siRNA were listed in Table 1. SiRNAs of LINC00673, LINC00673, miRNA mimics and inhibitors were designed and synthesized by Ruibo Guangzhou. Transfection methods are described as references [8].

RNA was extracted from cells or tissues using TRIzol reagent (Invitrogen, Carlsbad, CA) and subjected to qRT-PCR. LINC00673, miR-504 and RNU6 expression was tested by qRT-PCR using the primer set from RiboBio (Guangzhou, China), the method as reference[10]. The primer sequences information was defined as in Table 1.

Biotinylated LINC00673 was obtained from Sangon Biotech, Shanghai, which was transfected into the cells with cellular protein extract (1 mg) for 24 hours. Then the cells were disrupted and centrifuged, and the supernatant collected. Dynabeads® M-280 Streptavidin (BD Biosciences) was applied to absorb biotinylated miR-504 along with LINC00673. And then, the product is washed and dehydrated for qRT-PCR detection.

Animal experiments were conducted using six-week-old female athymic (nu/nu) mice. Canpan-1 cells stably transfected with a series of lentiviruses were constructed in our laboratory. Next 8 nude mouse were divided into each groups and were injected with 4×106/100µl cells. The mice were sacrificed 15 days after injection after tumor volume reached 1500 mm3[13]. 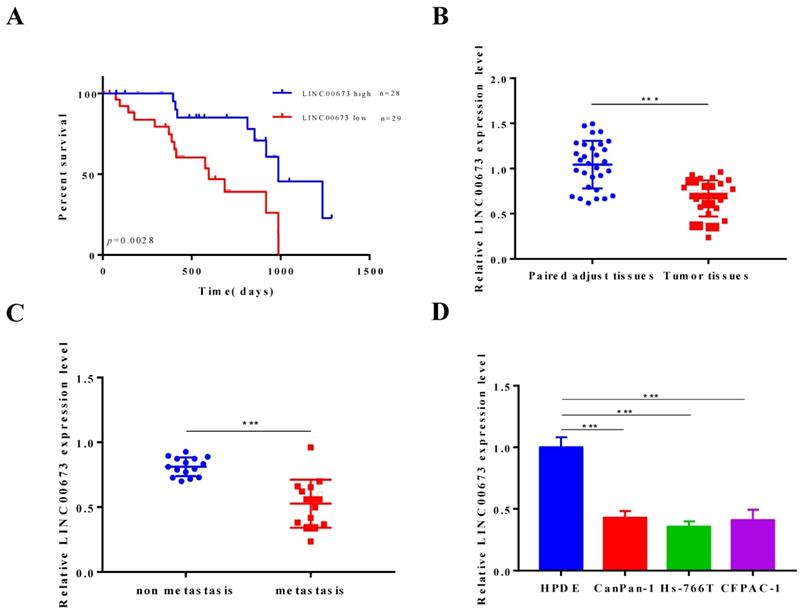 To investigate the function of LINC00673 in the tumorigenesis of pancreatic cancer, we used CanPan-1 cell lines, which exhibit intermediate expression of LINC00673. We transfected siRNA specific to LINC00673 in CanPan-1 cells and detected LINC00673 expression at 72 h post transfection (Fig. 2A). When LINC00673 was overexpressed, a lower migration rate was detected, but higher migration rates were observed when LINC00673 was knocked down (Fig. 2B). At the same time, CCK-8 assays showed that cell viability was significantly reduced in LINC00673-overexpressing cells (Fig. 2C). The cell apoptosis assay further supported the above inference. Less cell death appeared in the siLINC00673 group, whereas more cell death occurred in the LINC00673-overexpressing group, as shown by Western blotting (Fig. 2D) and flow cytometry (Fig. 2E).

A direct target relationship between LINC00673 and miR-504 was predicted by StarBase v2.0 (Fig. 3A). We transfected LINC00673 or siLINC00673 into CanPan-1 cells and detected the miR-504 expression level 72 h post transfection, and we found that the miR-504 expression increased when LINC00673 was disturbed (Fig. 3B). A luciferase reporter assay showed significantly lower luciferase activity in the miR-504 mimic+LINC00673-wt group than in the miR-504 mimic+LINC00673-mut group (Fig. 3C). Similarly, greater LINC00673 enrichment was observed in the bio-miR-504 group, indicating a strong correlation (Fig. 3D). In addition, linear regression analysis demonstrated that LINC00673 was negatively correlated with miR-504 after qRT-PCR detection of 30 tissue specimens (Fig. 3E).

We next transfected inhibitors or mimics specific for miR-504 into CanPan-1 cells and detected miR-504 expression levels 72 h post transfection (Fig. 4A). The miR-504 inhibitor suppressed cell migration in the miR-504 inhibitor group but promoted migration in the miR-504 mimic group, and these effects were reversed by LINC00673 (Fig. 4B). Furthermore, miR-504 overexpression promoted pancreatic cancer cell proliferation, and this process was reversed by LINC00673 (Fig. 4C). The cell apoptosis rate was lower when miR-504 was up-regulated but higher when miR-504 was inhibited (Fig. 4E). Consistent with the apoptosis analysis, miR-504 overexpression induced the expression of the pro-apoptotic protein cleaved-caspase3, but LINC00673 reversed this effect (Fig. 4D). Together, our data suggest that miR-504 overexpression promoted cancer progression in pancreatic cancer.

HNF1A is a downstream protein in pancreatic cancer, and miR-504 may directly target HNF1A, as predicted by TargetScan. The luciferase reporter assay validated this prediction due to significantly lower luciferase activity in the miR-504 mimic+HNF1A-wt group (Fig. 5A and 5D). The relationship was also confirmed in pancreatic cancer cells by Western blotting (Fig. 5B) and qPCR (Fig. 5C), which again revealed a negative regulatory relationship with miR-504 (Fig. 5E). We also tested the relationship between LINC00673 and HNF1A, as shown in Fig. 5F and 5G, and it was found that miRNA-504 affected the expression of HNF1A and that LINC00673 affected the expression of HNF1A; thus, LINC00673 was positively correlated with HNF1A (Fig. 5H).

As shown in animal experiment, tumor volume (Fig. 7A) and tumor weight (Fig. 7B) were significantly decreased when LINC00673 was overexpressed. However, there is no significant difference in body weight (Fig. 7C). The IHC assay found that protein of proliferation (Ki-67) were promoted in the siLINC00673 group but suppressed in the LINC00673 group, and these effects could be reversed by HNF1A. The expression of migration protein E-cadherin was promoted in the LINC00673 group but suppressed in the siLINC00673 group, and these effects could be reversed by miR-504. (Fig. 7D). HNF1A and miR-504 expression changes were like those observed in vitro after LINC00673 knockdown or overexpression in tumors, as determined by qRT-PCR and shown in Fig. 7E. In addition, we found that LINC00673 may suppress pancreatic cancer deterioration by downregulating miR-504, which restrains HNF1A expression in vivo. 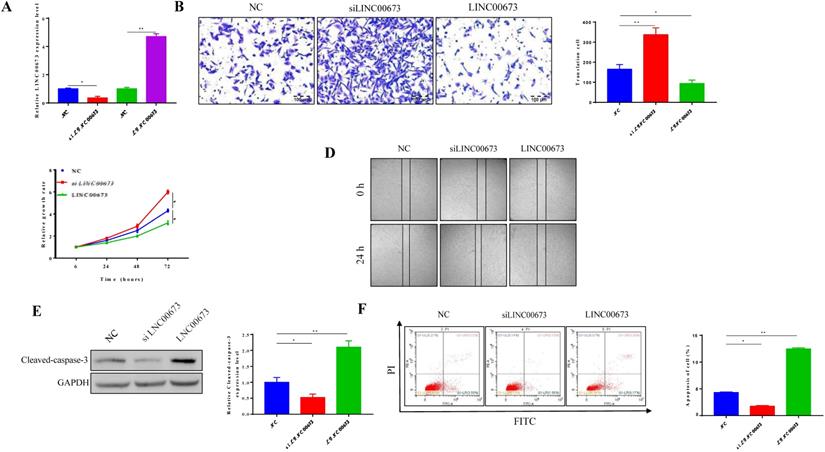 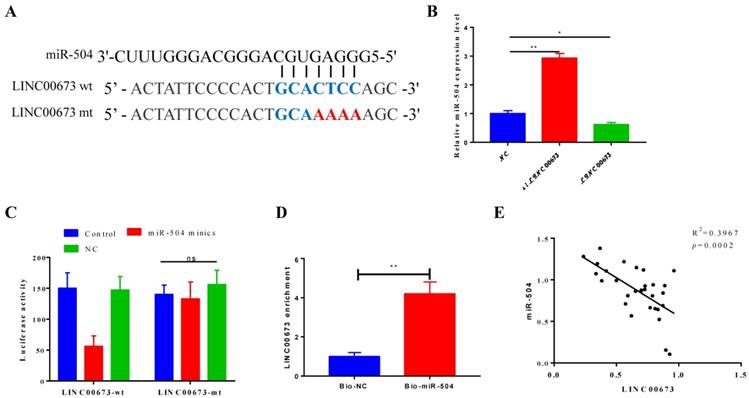 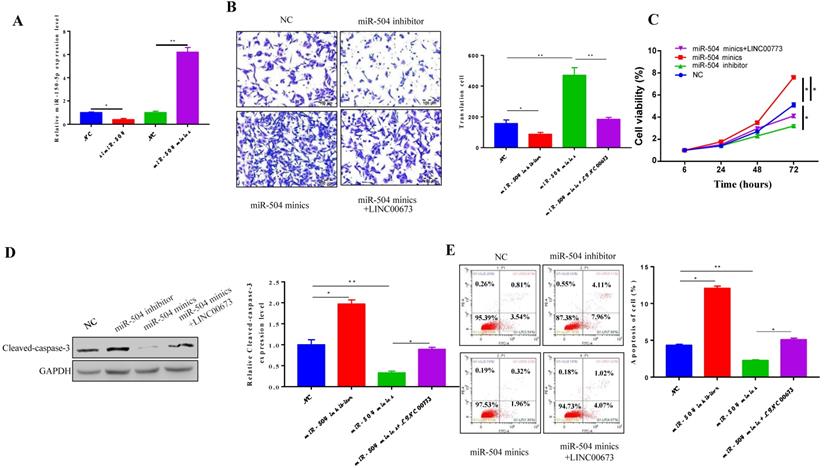 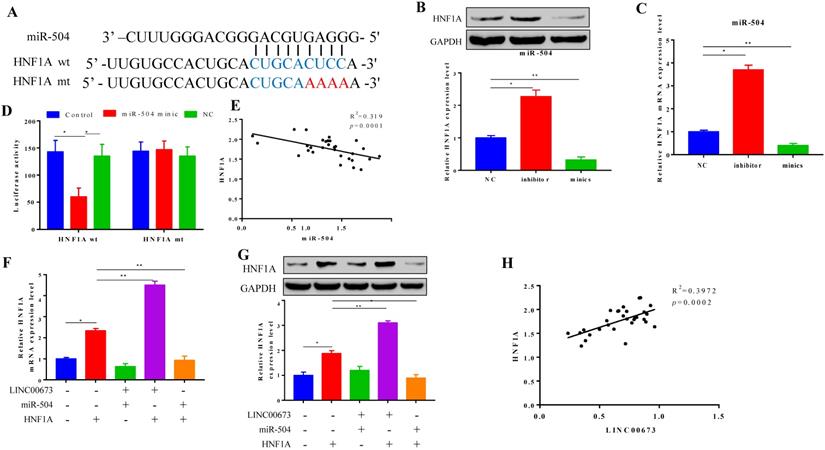 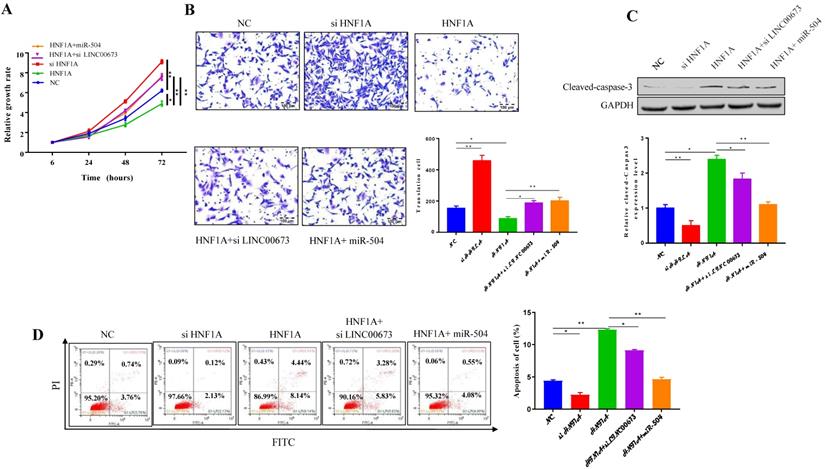 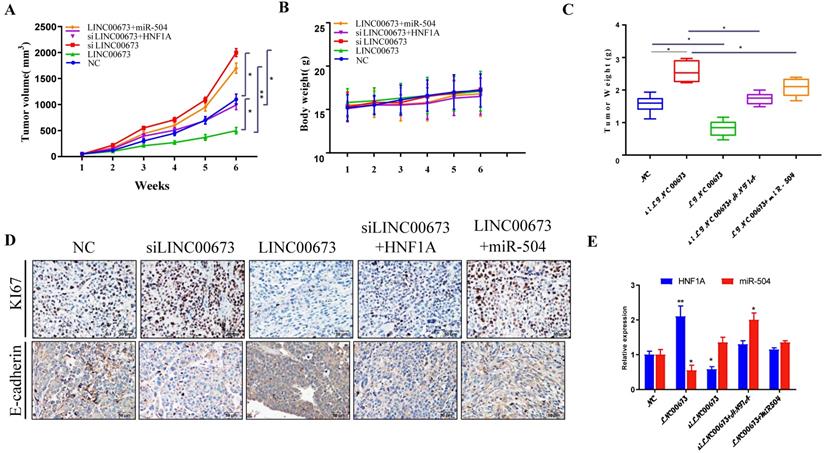 In this study, we clarified the anti-PC mechanism of LINC00673. The accumulated evidence shows that microRNAs can promote cancer migration and invasion[20-22]. We searched for candidate microRNA targets of LINC00673 (mirdb.org) and identified miR-504 as a candidate target of LINC00673. Some studies have shown that miR-504 promotes tumor growth and metastasis in multiple cancers [22-25]. Our data show that inhibition of LINC00673 suppressed miR-504 expression and that silencing of miR-504 attenuated the inhibition of migration and invasion by LINC00673. More importantly, our experiments showed that LINC00673 overexpression significantly inhibited the expression of miR-504, suggesting that LINC00673 plays an anticancer role partially through the inhibition of miR-504. In addition, we investigated the mechanism whereby miR-504 regulates migration and invasion in PC. Previous studies have shown that KLK4 can promote the suggesting that HNF-1α might play a tumor suppressor role[26, 27]. Here, we used a series of experiments to identify HNF1A as a target gene of miR-504 in PC cells. Our data showed that HNF1A expression was increased or decreased in PC cells by inhibition or ectopic expression of miR-504, respectively. In addition, a luciferase reporter assay showed that miR-504 directly targeted the 3`-UTR of HNF1A. Furthermore, clinical data showed that the expression levels of miR-504 and HNF1A were inversely correlated in PC patient specimens. Additionally, our data demonstrated that restoration of HNF1A blocked the decrease in LINC00673 expression and that miR-504 overexpression induced acceleration of invasion and apoptosis. Taken together, these data suggest that LINC00673 inhibits PC invasion through inhibition of miR-504 by targeting HNF1A.

In summary, we combined clinical and experimental studies to establish the role of LINC00673 in PC metastasis. Overexpression of LINC00673 dramatically inhibits PC apoptosis and invasion. Our findings will be helpful for developing potential therapeutics for PC metastasis.

This study was supported by the National Natural Science Foundation of China (No. 81472288).