Background: Cytochrome P-450 4A11 (CYP4A11) and peroxisome proliferator-activated receptor-α (PPARα) are expressed at high levels in renal proximal tubules, and upregulation of CYP4A11 protein levels is known to be influenced by PPAR agonists. The goal of this study was to evaluate the clinicopathological role of CYP4A11 expression in renal cell carcinoma (RCC).

Methods: We performed immunohistochemical analysis of CYP4A11, CYP4A22 and PPARα and correlated the results with the clinicopathological features of RCC (n=139). Reverse transcription digital droplet polymerase chain reaction (RT-ddPCR) against CYP4A11 and CYP4A22 was also performed.

Renal cell carcinoma (RCC) is a group of different types of cancer arising from the renal epithelium [1]. The three major types of RCC are clear-cell RCC (ccRCC), papillary RCC (pRCC), and chromophobe RCC (chRCC), of which ccRCC is most common [2]. Each RCC subtype is characterized by a cancer-specific mutational spectrum that is often linked to different metabolic pathways involved in oxygen, iron, energy and/or nutrient sensing [2-4]. RCC cells can process different metabolic features from normal tubular epithelial cells and use this metabolic conversion to overcome stress imposed on the tumor cells. Understanding each tumor-specific process can lead to improved diagnosis and prognosis and to the development of novel therapeutics.

Physiologically, members of the cytochrome P-450 4 (CYP4) family catalyze the omega (ω) hydroxylation of saturated, branched-chain, and unsaturated fatty acids [5]. In addition to a playing a in fatty acid catabolism, the CYP4 family also catalyzes the formation of the ω-hydroxylated metabolite of arachidonic acid, 20-hydroxyeicosatetraenoic acid (20-HETE), which is a vasoactive and natriuretic substance that regulates vascular and renal functions [6]. The human CYP4A subfamily consists of two highly homologous CYP4A genes, namely, CYP4A11 and CYP4A22. CYP4A22 is known to be a nonfunctional enzyme and is expressed at much lower levels than CYP4A11 [5]. CYP4A11 harbors the peroxisome proliferator-activated receptor-α (PPARα) response element in the promoter region of the gene; therefore, PPARα can regulate CYP4A11 [7]. Both CYP4A11 and PPARα were expressed in the renal proximal tubular epithelium [8], and the PPARα agonist clofibrate induced CYP4A protein expression and activity in the renal cortex [8].

The aim of the study was to determine the cellular localization and immunoreactivity levels of CYP4A11, CYP4A22 and PPARα by immunohistochemistry (IHC) in 108 ccRCCs and 31 non-ccRCCs. Additionally, western blotting and reverse transcription digital droplet polymerase chain reaction (RT-ddPCR) were performed. The results of the IHC study were correlated with various clinicopathological characteristics, including patient survival.

This study was approved by the Institutional Review Board of Chungnam National University Hospital (CNUH 2018-02-017-003). All tissue samples for western blot and RT-PCR studies using frozen tissue samples and clinical data were obtained from the National Biobank of Korea at Chungnam National University Hospital. All patients signed a written informed consent form for biobanking before data were included in the register. The requirement for informed consent for the retrospective comparison study was waived because the study was based on immunohistochemical analysis using formalin-fixed paraffin-embedded (FFPE) tissue.

We conducted a review of the records of 214 patients who underwent surgical resection of RCC between 1999 and 2014 at Chungnam National University Hospital in Daejeon, South Korea. The inclusion criteria were that the FFPE tumor tissues were available and the follow-up data were detailed. The exclusion criteria were as follows: (1) patients had previous history of other cancers; (2) patients had received previous curative resection for any kidney lesion; (3) patients had received preoperative chemotheraphy or radiation therapy; (4) patients had received any molecular targeted therapy. After applying both inclusions and exclusion criteria, 139 patients with RCC were included in the study. The 139 RCC cases included 108 cases of ccRCC, 18 cases of type 2 pRCC, 4 cases of chRCC and 9 cases of unclassified RCC. All electronic medical records of the patients were reviewed by KHK and HJL to obtain clinical data. In one case, there was a regional lymph node metastasis in a category-3 primary tumor, and the other 138 cases had no regional lymph node metastasis or distant metastasis at the time of the initial surgical resection. Eighty-seven patients among the 139 RCC cases underwent immunotherapy. The type of immunotherapy provided was interferon therapy alone, without a checkpoint inhibitor. RCC recurrence or metastasis was determined via imaging and/or histological analysis. Disease-free survival (DFS) was determined as the time interval between the date of initial surgical resection and the date of RCC recurrence or metastasis. Overall survival (OS) was defined from the time of initial surgical resection to the date of death due to any cause. Without confirmation of death, recurrence or metastasis, OS or DFS time was recorded based on the last known date that the patient was alive. The 2 most representative viable tumor areas and one non-neoplastic area were selected and marked on the hematoxylin and eosin (H&E)-stained slides. The tumor, node, and metastasis (TNM) staging and nuclear histologic grading for RCC were performed based on the time of surgical resection according to the staging system of the 8th Edition of the American Joint Committee on Cancer (AJCC) [9]. Tissue microarrays (TMAs) were created by punching tissue columns (3.0 mm in diameter) from the original paraffin blocks and inserting the columns into new recipient paraffin blocks (each containing 30 holes to receive the tissue columns). Four and 12 matched pairs of freshly frozen primary ccRCC and non-neoplastic kidney tissue were obtained for western blotting and RT-PCR, respectively, from the National Biobank of Korea at Chungnam National University Hospital, a member of the Korean Biobank Network.

Immunohistochemical staining was scored using digitally scanned files and the ScanScope program (Aperio ScanScope CS system, Vista, CA, USA). A modified version of the method described by Allred et al. was used to evaluate both the intensity of immunohistochemical staining and the proportion of stained neoplastic or non-neoplastic hepatocytes in each slide [10]. The proportion scores ranged from 0 to 5 (0, 0; 1, >0 to 1/100; 2, >1/100 to 1/10; 3, >1/10 to 1/3; 4, >1/3 to 2/3; 5, >2/3 to 1), and the intensity scores ranged from 0 to 3 (0, negative; 1, weak; 2, moderate; and 3, strong). To determine the total immunohistochemical score, the intensity score and the proportion score were multiplied for each specimen (range, 0-15). For categorical analyses, expression at greater than the median value of the total score of CYP4A11 was regarded as high (total score>4). The results were examined separately and scored by KHK and JMK, who were blinded to patient details. Discrepancies in the scores were discussed to obtain a consensus.

Samples from 4 ccRCC patients, 4 paired vials (100 mg) of ccRCC tumor tissue and one nontumor tissue, at a distance of at least 2.0 cm from the tumor, were stored at -80°C in liquid nitrogen and subsequently examined for CYP4A and CYP4A11 expression by western blotting. A primary rabbit monoclonal antibody against human CYP4A (homologous to human CYP4A11 and 4A22; ab140635; Abcam, Cambridge, UK) and a primary rabbit polyclonal antibody against human CYP4A11 (product # PA5-30004; ThermoFisher Scientific, Rockford, IL, USA) were diluted 1:1000. Western blotting was conducted as previously described [11].

Association of clinicopathological characteristics with expression of CYP4A11, CYP4A22 and PPARα

The 139 RCC cases were evaluated immunohistochemically for CYP4A11 expression in RCC tissues. Almost all of the non-neoplastic proximal tubules were strongly and diffusely positive for CYP4A11 and PPARα expression, while most of the ccRCC cells showed severely decreased expression of CYP4A11 and PPARα. The non-ccRCC cells, including those of the papillary type 2, chromophobe and unclassified types, expressed higher levels of CYP4A11 and PPARα than ccRCC cells (p<0.001 and p<0.090) (Fig. 1). Most non-neoplastic proximal tubules were weakly and diffusely positive for CYP4A22 expression, but 13 (9.3%) of the 139 RCCs were weakly expressed.

Regarding the immunohistochemical staining, western blot assays of CYP4A11 expression in the 4 matched pairs of ccRCC and nontumor tissue sections showed that ccRCC tumor samples expressed significantly lower levels of CYP4A (homologous to human CYP4A11 and 4A22) and CYP4A11 than the non-neoplastic tissue samples (p=0.029, p=0.114) (Fig. 2). 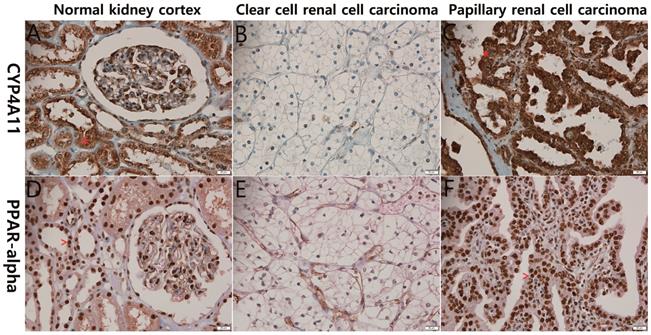 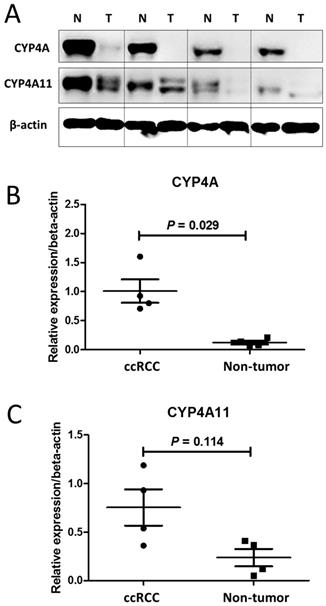 CYP4A22 and PPARα expression did not show an association with the clinicopathological characteristics of the 139 RCC patients.

Patient characteristics according to immunohistochemical expression of CYP4A11 in renal cell carcinoma (n=139).

Results of univariate analysis of overall survival and disease-free survival in 139 patients with renal cell carcinoma.

Results of multivariate analysis of overall survival and disease-free survival in 139 patients with renal cell carcinoma.

In this study, we evaluated the expressions of CYP4A11, CYP4A22 and PPARα in 139 RCC cases. We demonstrated that the CYP4A11 expression was significantly lower in ccRCC cells than in non-ccRCC. In addition, increased CYP4A11 protein and mRNA expression in RCC cells was positive correlation with a shorter OS period and could be considered one of the potential poor prognostic factors. The different expressions of CYP4A11 between ccRCC and non-ccRCC can be correlated with different metabolism of each cancer type.

RCC has a variety of subtypes with varying histological and clinical outcomes due to the different metabolism of each subtype [13]. The classic subtype of RCC is ccRCC, and the other major subtypes are pRCC, chRCC and undifferentiated RCC [2, 14]. The most common gene involved in the pathogenesis of ccRCC is the von Hippel-Lindau gene (VHL) [14]. One of the major functions of the VHL gene product is regulation of the levels of hypoxia-inducible factor 1 alpha and 2 alpha (HIF1A and HIF2A) [15]. In ccRCC, inactivation or loss of VHL leads to aberrant accumulation of HIF proteins, which in turn results in angiogenesis, glycolysis, apoptosis, and lipid deposition in ccRCC [2, 16]. Accordingly, in terms of histological appearance, the typical ccRCC is rich in glycogen, lipids and blood vessels [14]. We hypothesized that the level of CYP4A11 in ccRCC cells could be related to the lipid- rich cytoplasm of ccRCC cells. CYP4A is well known to catalyze the oxidation of endogenous lipids and xenobiotics [17]. CYP4A shows a preference for the metabolism of medium-chain fatty acids in lipid homeostasis [18]. According to previous studies, CYP4A mRNA expression is upregulated in human thyroid, ovary, breast, and colon cancer tissues and in pancreatic ductal adenocarcinoma tissues [19-21]. However, CYP4A11 was downregulated in hepatocellular carcinoma [11], although the liver and kidney showed the highest levels of CYP4A11 mRNA expression [22]. 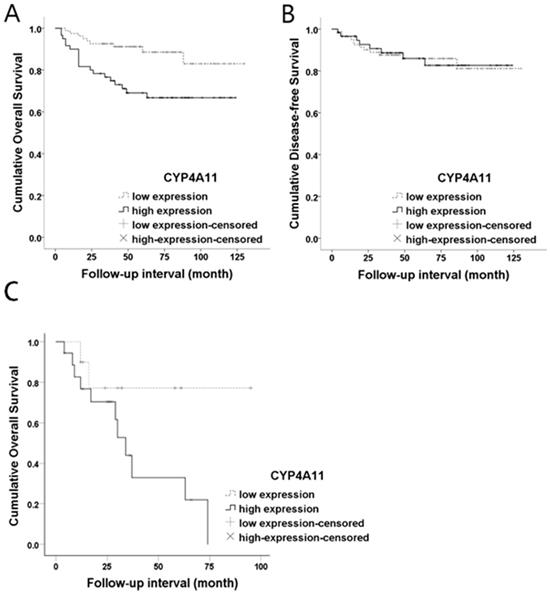 PPARs regulate the expression of genes that control fatty acid metabolism and bind to peroxisome proliferator response elements in CYP4A [7]. In particular, CYP4A11 is regulated by PPARα and is expressed at high levels in the liver and kidney [5, 8, 23, 24]. Our data also showed that the expression of CYP4A11 and PPARα was positively related to each other in RCC cases. CYP4A11 can catalyze the ω-hydroxylated metabolite of arachidonic acid, 20-HETE, which plays an important role in the regulation of vascular tone, renal blood flow, and renal tubular sodium transport [8, 25]. Each RCC type exhibits unique cancer metabolism; ccRCC cells contain more total cholesterol, especially esterified cholesterol, than normal renal tubular epithelial cells or non-ccRCC cells [2, 26]. Those results of lipid deposition in ccRCC cells are consistent with our data of decreased CYP4A11 expression in ccRCC cells. Therefore, we suggest that decreased CYP4A11 expression could be a suitable diagnostic marker for ccRCC. Reduced expression of CYP4A11 may be one of the characteristics of ccRCC that is different from normal renal tubular epithelial cells and may be one of the causes of decreased fatty acid catabolism or increased lipogenic metabolism of ccRCC. The genetic or molecular biological difference between each tumor type underlies different morphological features [27]. 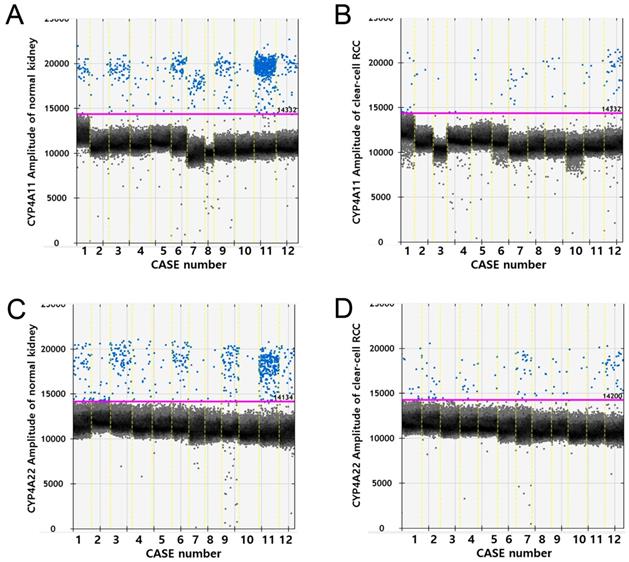 The present study is the first to evaluate the expression level of the human CYP4A11 protein and mRNA in human RCC. CYP4A11 expression was reduced in ccRCC cells compared to non-neoplastic renal tubular epithelial cells or non-ccRCC cells based on IHC, western blotting and RT-ddPCR. In the 139 RCCs, CYP4A11 expression was positively correlated with poor prognostic factors, including high histologic nuclear grade and short OS. Our results demonstrate that CYP4A11 metabolism is different between ccRCC and non-ccRCCs and might be useful as a predictive diagnostic factor for ccRCC and for the development of a potential therapeutic target.

This work was supported by the Basic Science Research Program through the National Research Foundation of Korea (NRF) funded by the Ministry of Education, Science, and Technology (NRF-2016R1D1A1B01014311; KHK).