Methods: Data mining and analysis of LZAP expression levels were performed using several online databases, including The Cancer Genome Atlas (TCGA). A cervical cancer cell line that stably overexpresses LZAP was established, and the effect of LZAP overexpression on cell proliferation, invasion, migration and tumor formation in vivo as well as its mechanism were explored.

Cervical cancer is the third most common malignant tumor of the female reproductive tract and the fourth largest cause of cancer-related death worldwide [1, 2]. Most patients already have progressive disease at the time of treatment, and many treatment methods have not achieved satisfactory results [3, 4]. Presently, the mechanisms of proliferation, invasiveness and metastasis of cervical cancer have not been fully clarified [5]. Moreover, specific and efficient intervention is lacking. Therefore, studies on the mechanism of the occurrence and development of cervical cancer can provide a new approach to determine targeted treatment of cervical cancer with important theoretical and clinical significance.

Paraffin blocks containing enough formalin-fixed tumor specimens were sliced continuously at a thickness of 4 μm and placed on silane-coated slides for immunohistochemical analysis. The slices were deparaffinized in xylene and rehydrated in 100, 100, 95, 85 and 75% ethanol solutions. Antigen retrieval was performed in 0.01 mol/l sodium citrate buffer (121 ℃ autoclaved 2 min, pH 6.0). Endogenous peroxidase activity was quenched by incubating the sections in 3% H2O2 at room temperature for 10 min. Then, the sections were washed in phosphate-buffered saline (PBS) and blocked with 10% goat serum (Zhongshan Biotechnology Co., Ltd.) for 30 minutes after which the slides were incubated with a rabbit anti-human LZAP (Abcam, Cambridge, MA, USA) antibody in a humidifying chamber overnight at 4 ℃. After the slides were washed again three times in PBS, the slides were incubated with the secondary antibody conjugated to horseradish peroxidase at room temperature for 30 minutes. The signal was developed with 3,3'-diaminobenzidine (DAB) solution and counterstained in 20% hematoxylin. Finally, all slides were dehydrated and mounted with a cover slip. For the negative control, antibody diluent was used in place of the primary antibody.

LZAP (nm_001278198)-overexpressing cell lines were established using lentivirus, and negative control (NC) cells were established using its corresponding empty vector lenti-emp. The day before lentivirus transfer, HeLa and HCC94 cells were inoculated in 6-well plates at a density of 5 × 10 ^ 4 cells/well (20 ≤ 30% coincidence degree). Polyphenylene (10 mg/ml) and Enhanced Infection Solution (GeneChem, China) were used to transfer lenti-LZAP into cells under suitable conditions. The corresponding empty vector (lenti-NC) was introduced into other cells at the same time by the same method. The cells were cultured in an incubator containing 5% CO2 at 37 ℃ for 6 h at which time the medium was replaced. To establish a stable cell line, 48 hours after the medium was replaced, the cells were screened in media containing puromycin (1 ≤ 2 mg ·ml, Sigma) for at least 1 week after transfection. The cells were harvested for mRNA, protein analysis and other detection methods. The LZAP sequence designed and synthesized is: forward 5'GCTGGTGGACAGAAGGCACT3'; reverse 5' TGTCCTGGATGGCAGCATTGA 3'.

A 96-well plate was used to inoculate cervical cancer cells at a density of 1000 cells per well (100 μl cell suspension), and 100 μl of serum-free medium containing 10% CCK8 reagent was added at d0, d1, d2, and d3. Next, the OD450 was measured after 2 hours, and proliferation curves were generated. There were 5 replicate wells per cell type, and each experiment was repeated 3 times.

Cervical cancer cells in the logarithmic growth phase were inoculated into a six-well plate at a density of 1000 cells/well. Cells were routinely cultured for 10 days, washed 3 times in phosphate-buffered saline (1×PBS), soaked in 70% methanol for 15 min, and stained with crystal violet. After 30 min, they were rinsed 3 times in PBS (note that the cells should not be washed away after each wash), and the number of colonies was counted by light microscopy. Each experiment was repeated 3 times.

After the cells were cultured to 90% confluence, the cells were washed twice with precooled PBS and lysed in RIPA lysis buffer (Thermo Fisher Scientific, Waltham, MA, USA) containing 10% protease inhibitor cocktail (Roche, South San Francisco, CA, USA). The protein samples (40 μg each) were separated on 10% polyacrylamide gel by SDS-PAGE and transferred to a PVDF membrane. Then, the membrane was blocked with 5% skim milk at room temperature for 1 hour. The membrane was next incubated with the primary antibody (against LZAP, E-cadherin, p-AKT (s473), AKT or GAPDH) at 4 ℃ for 1 h. The membrane was washed in wash buffer (TBS-T) 3 times for 5 min each and then incubated with an HRP-conjugated secondary antibody (Cell Signaling Technology) at room temperature for 1 h. GAPDH was used as an internal reference. Finally, the film was washed with TBS-T for 30 min, and the bands were visualized using enhanced chemiluminescence (Amersham Corporation, Arlington Heights, IL, USA).

SPF-grade male BALB/c nude mice were purchased from the Zoological Research Institute of the Chinese Academy of Sciences, and all animal-related procedures were performed according to the Animal Protection Committee of Fujian Medical University. Stable high-expressing MGC cells and corresponding control cells (2x10^6) were suspended in 200 ml of phosphate-buffered saline (PBS) and were injected into the right armpit of the nude mice. The tumor volume was measured every 7 days, and the formula was determined by the following equation: (length X width of 2)/2 cm. Mice were sacrificed 35 days after injection, at which point all tumors were excised and weighed.

The expression of LZAP is upregulated in cervical carcinoma

Tumor development is a complex event involving both environmental and genetic factors. Although the current level of diagnosis and treatment of cervical cancer is increasing, it is still a fatal malignant tumor. It is therefore important to explore the specific biomarkers and effective therapeutic targets of cervical cancer to promote the early diagnosis of this disease and improve the efficacy of molecular targeted drugs. 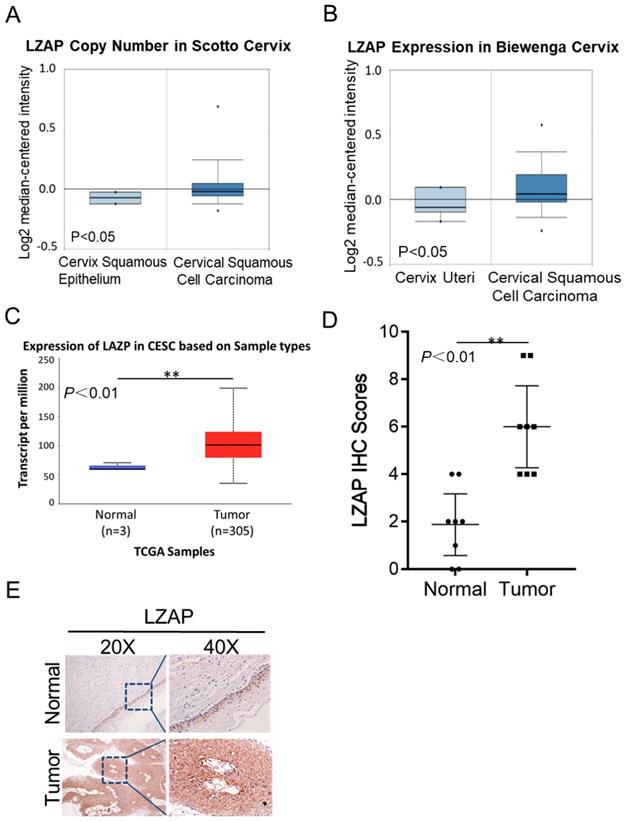 Construction of the overexpressing stable cell line. (A) The overexpression efficiencies of HeLa cells and HCC94 cells after transfection of LZAP. (B) Cell lysates were extracted from HeLa and HCC94 cell lines that stably expressed LZAP protein, which along with GAPDH, was detected by Western blot, scale bar, 50 µm. 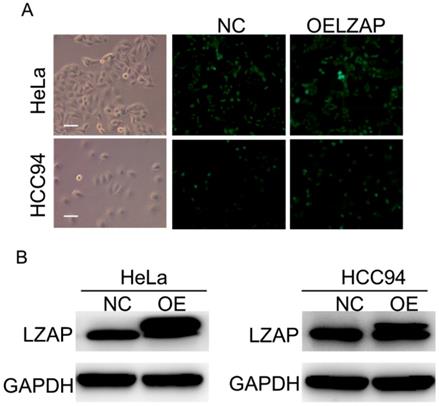 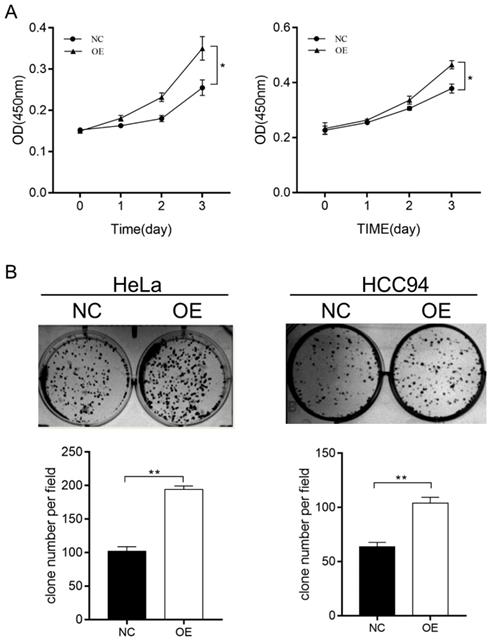 Transwell assay was used to verify the function of the stably transfected cells. (A, B) The migration and invasion abilities of HeLa and HCC94 cell lines stably expressing LZAP was examined using a Transwell assay, scale bar, 50 µm. (*P < 0.05; **p< 0.01) 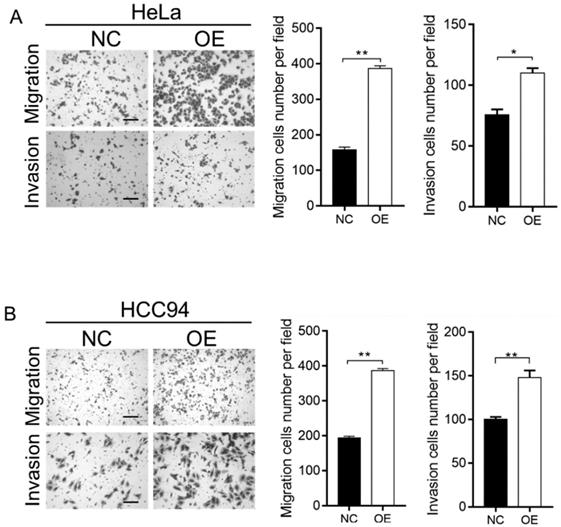 Xenograft models in nude mice. Xenograft models using three sets of stable HeLa cells were established, and the tumors were allowed to grow for 35 days. (A) The size of the xenografts was measured every seven days until the mice were sacrificed. (B) Representative images of the effect of LZAP overexpression are presented. (C) The average tumor weights of the three different groups were compared. (D) The localization and expression of LZAP in xenografts were detected by IHC. (*P < 0.05; **p< 0.01) 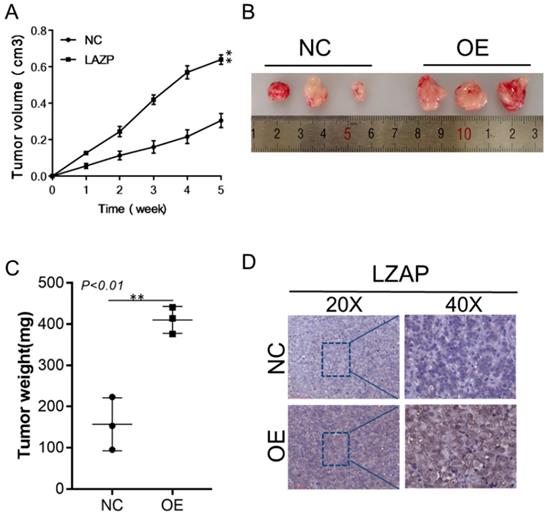 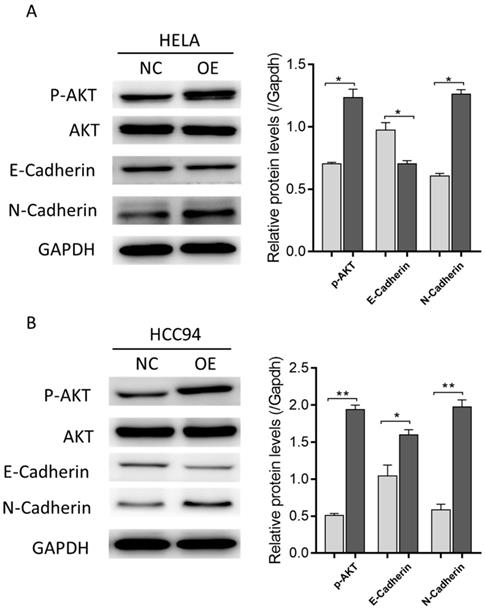 In recent years, more and more studies have reported that LZAP is involved in the occurrence and development of tumors, but substantial differences have been reported in the expression and role of LZAP in tumors. Mak et al found that LZAP was highly expressed in HCC tissues and that LZAP could promote the metastasis of HCC cells by activating p21-activated protease 4 and downregulating the expression of the tumor inhibitor p14 [10]. Stavd et al found that the expression level of LZAP was increased in most lung cancer tissues, which played an important role in the diagnosis of lung cancer [11]. Wang et al found that the level of LZAP protein was decreased in head and neck squamous cell carcinoma and mediated apoptosis by inhibiting the activation of NF-kB [12]. At the same time, Jiang et al also found that LZAP can induce apoptosis by participating in G2/M phase of the cell cycle [13]. It has been demonstrated that LZAP plays a different role in different tumor types and participates in multiple classical tumor signaling pathways, which suggests that LZAP may play a key role in tumor development.

In this study, we mined data from the public databases Oncomine and TCGA and analyzed the expression level of LZAP. It was found that the expression level of LZAP in cervical cancer tissues was upregulated compared with normal tissues. To further study the role of LZAP in cervical cancer, we used a lentivirus to construct a stably transfected LZAP-overexpressing cell line. Through in vivo experiments, we observed that overexpression of LZAP can promote the growth of HeLa and HCC94 cervical cancer cells and transplanted tumors in nude mice. This suggests that LZAP can promote the proliferation of cervical cancer cells. The Western blot results showed that overexpression of LZAP could increase the phosphorylation level of AKT at position 473. AKT is widely expressed in tissues and is the primary downstream target of the PI3K/AKT pathway [14, 15]. As the central link of multiple cell signaling networks, AKT plays an important role in regulating the processes of cell proliferation, differentiation and survival [16]. It was found that AKT could upregulate the expression of the tumor inhibitor c-Myc, regulate the cell cycle and promote cell proliferation. Moreover, cell lines stably transfected with LZAP could induce epithelial stroma transformation, downregulate the expression of E-cadherin, decrease cell adhesion, and promote the invasiveness and metastasis of cells, and thus this protein plays an important role in the occurrence and development of tumors [17].

In addition, the results of the invasion assay showed that overexpression of LZAP could promote the invasiveness and migration of HeLa and HCC94 cervical cancer cells. Western blot also showed that the overexpression of LZAP downregulated the expression of E-cadherin protein and upregulated the expression of N-cadherin, which promoted the EMT process. EMT refers to the transdifferentiation of epithelial cells into mesenchymal cells under normal physiological and specific pathological conditions [18]. EMT is a complex process characterized by the loss of polarity, adhesion and stroma in epithelial cells. Increasing evidence suggests that EMT plays a key role in the metastasis of a variety of cancers, mainly by reducing the expression of epithelial markers and increasing the expression of stromal markers, which reduces cell adhesion and increases cell migration, thus increasing the capacity for invasion and cell metastasis [19, 20]. During the process of EMT, an important molecular event is the abnormal expression of cadherins, in which E-cadherin and N-cadherin are the two types most closely related to tumor metastasis [21]. Wheelock et al presented the concept of "cadherin conversion" (cadherin switch), which is an important mechanism of EMT [22]. Other scholars have intensively studied the classical cadherin molecules and found that the deletion or mutation of E-/N-cadherin molecules is closely related to the occurrence and metastasis of many tumor types such as liver cancer, gastric cancer, breast cancer and lung cancer [23, 24].

In summary, the current study shows that upregulation of LZAP can promote the phosphorylation of AKT and can enhance the EMT-induced invasion and migration abilities of cervical cancer cells, which promotes the proliferation of cervical cancer cells and disease progression. LZAP is an oncogene in cervical cancer, which suggests that LZAP may be a potential new index of cervical cancer treatment, but this requires confirmation by further large-scale clinical studies. Furthermore, we found that the LZAP is targeted at AKT and EMT. In some studies, there were found that PI3K/AKT/GSK-3βpathway which can promote the epithelial-to-mesenchymal transition [25, 26]. However, how LZAP regulates AKT phosphorylation and the occurrence of EMT is the limitation of this study, which requires further investigation.