According to the American Cancer Center, there were about 234,030 newly diagnosed lung cancer patients in 2018, of which more than 80% had non-small cell lung cancer (NSCLC)1,2. Early-stage lung cancer patients account for 16% of newly diagnosed cases, diagnosed according to the criteria of the American Joint Commission for Cancer stage I or II disease3. Currently, surgery is the gold standard for treatment of early-stage NSCLC4. However, >20% of patients with early-stage NSCLC are ineligible for surgery because of various factors such as old age, severe impairment of lung function, or other comorbidities5. Therefore, viable alternatives, including ablation and SBRT, have been emerging to achieve reliable local control in such patients6,7. Three-year local control rates of up to 90% were observed on application of SBRT for early-stage lung cancer6,8. Ablation, including laser ablation, cryotherapy, electrocautery, and fulguration, is an image-guided technique9. Good local-regional control has been reported with ablation, compared to that with SBRT, for patients with inoperable NSCLC10,11. To date, no large population-based studies have been performed using a cancer database to compare clinical outcomes between ablation and SBRT cohorts. In addition, there have been no randomized studies or prospective trials for assessing the effectiveness of the two treatments. The purpose of this study was to compare survival rates between patients with stage IA NSCLC treated with ablation and SBRT using the Surveillance, Epidemiology, and End Results (SEER) database.

The data used in this study were extracted from the SEER database. The SEER database is sponsored by the US National Cancer Institute and collects registry information, including that of patient survival, pathological type, disease stage, and treatment. The SEER database was established in 1973 and contains data of approximately 10% of the US population.

We limited the cohort to patients diagnosed with stage IA NSCLC (tumor size ≤3 cm) between 2004 and 2015. All included patients were inoperable and underwent SBRT or ablation (including laser ablation, cryotherapy, electrocautery, and fulguration). Complete patient information was available in the SEER database.

All data were analyzed using IBM SPSS, version 20.0 (IBM Corp, Armonk, NY, USA). Kaplan-Meier analysis was performed to compare survival curves between the ablation and SBRT groups. Propensity score methods were used to control for potential differences in the baseline characteristics of the included patients. Cox regression analysis was performed to assess the balance in baseline covariates between the two groups after adjusting for the estimated propensity scores.

Baseline Characteristics of Patients with Stage IA NSCLC Treated with SBRT and Ablation in the SEER Program, 2004-2015

No significant differences in survival curves were observed between the SBRT and ablation groups on Kaplan-Meier analysis, as shown in Figure 1. Among patients with stage IA NSCLC, survival (log-rank p>0.05) was similar in the ablation and SBRT groups (Figure 1A). Consistently, no significant differences in survival were observed between the two subtypes of NSCLC: SQCC (log-rank p>0.05) (Figure 1B) and AD (log-rank p>0.05) (Figure 1C). Our data demonstrated similar effects on survival of patients with stage IA SQCC and AD in the SBRT and ablation groups.

No significant differences (p=0.260) in the OS of patients with stage IA NSCLC were observed between the SBRT and ablation groups on univariate analysis (Table 3). Furthermore, no significant differences were observed in the OS of patients with stage IA SQCC (p=0.299) and AD (p=0.353) between the two groups (Table 3). A Cox model with nine variables, including sex, age, differentiation grade, tumor size, histologic type, insurance status, year of diagnosis, geographic region, and treatment, showed an HR (95% CI) of 0.930 (0.817-1.058, p=0.269) on comparing between the ablation and SBRT groups (Table 4). Then the following variables were excluded: insurance status, year of diagnosis, and geographic region (these covariates were not very close to the clinic), and a new Cox model was adjusted for age, sex, tumor size, differentiation grade, histologic type, and treatment. 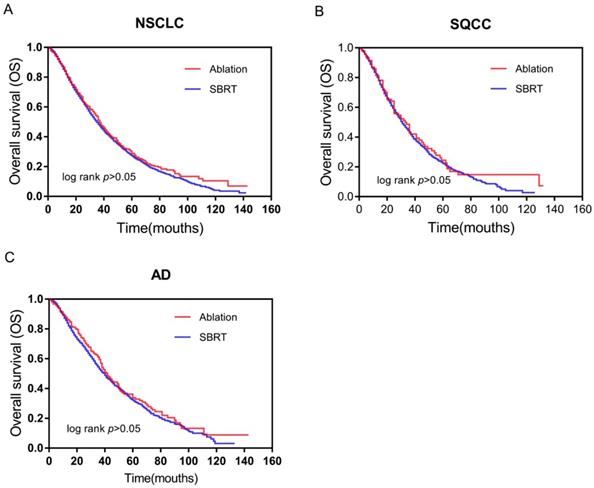 In this model, the HR (95% CI) was 0.974 (0.858-1.105, p=0.680) on comparing between the ablation and SBRT groups (Table 5). These results indicated that no significant difference was observed between the effect of SBRT and ablation on the OS of patients with stage IA NSCLC.

As some elderly patients with cardiopulmonary insufficiency or other comorbidities are not eligible for surgical treatment, non-invasive options, such as SBRT and ablation, have played an increasingly important role in the treatment of NSCLC12,13. Currently, no large-scale clinical trials have compared the therapeutic effect between ablation and SBRT and no independent cohorts which can be downloaded from publicly available databases to validate our main findings and conclusions, primarily owing to the novelty and limitations associated with the practical application of ablation treatment. Recently, Johannes Uhlig11 conducted a retrospective study and reported that the estimated 1-, 3-, and 5-year OS rates of patients treated with ablation were comparable to those of patients treated with SBRT (1-year, 85.4% vs. 86.3%, p=0.76; 3-year, 47.8% vs. 45.9%, p=0.32; 5-year, 24.6% vs. 26.1%, p=0.81). These results were similar to our findings. According to our study, no significant survival difference was seen on analyzing a large SEER dataset, which contained the information of patients diagnosed with stage IA NSCLC during 2005-2014. Our results provide a curative reference on the non-inferior survival benefits achieved with ablation as primary treatment for stage IA NSCLC.

At present, it is widely accepted that SBRT is the optimal curative approach for medically inoperable patients14. SBRT can reach occult regional and deep structures that are difficult to explore via surgery, resulting in prolonged survival. However, SBRT has a drawback; SBRT is associated with poor control of local pulmonary lesions or multiple metastatic disease, increasing the risk of cancer-specific death. Pneumonitis, dyspnea, and chest pain were most commonly reported adverse events associated with SBRT15, usually occurring approximately 4-12 weeks after treatment, in a systematic review16,17. The incidence of toxicities induced by SBRT was higher in patients with central lung cancer (close to the airway) than in those with peripheral lung cancer18,19. In addition, patients with advanced age or multiple comorbidities tend to forego definitive treatment; this is one of the predominant reasons why the systemic adverse reactions of SBRT commonly appear gradually over long-term treatment. and would not become new detective reflection factors within 30 days of readmission to hospital18. Relatively, complications of ablation usually occur on the same day or within a few days of treatment; of these adverse events, self-limiting pneumothorax is the most common10,20. The majority of patients can experience relief after symptomatic treatment, and only a small proportion of patients (10%-30%) need to undergo chest tube placement20,21. Other rare complications of ablation include pulmonary hemorrhage22,23, air embolism24,25, pleural effusion26, bronchopleural fistula formation27, bronchospasm10, and sometimes even death7. Considering the similarity in survival rates, fewer complications and better quality of life may be the main factors influencing the choice between SBRT and ablation for inoperable patients with stage IA NSCLC. This will be a direction for future research.

Although the SEER database provides a significant data-collecting platform for addressing this urgent issue, this investigation has some limitations. Although we conducted accurate matching of cohorts, this study was retrospective in nature; thus, the factors not included in the matching process may be responsible for the observed differences in outcome. In addition, OS was analyzed without any adjustment for radiation dose, toxicities, pulmonary function, cause of death, and local progression-free survival. Furthermore, the SEER database does not provide details regarding repetitive ablation treatments and feasible approaches, such as surgical, percutaneous, and bronchoscopic ablation. Therefore, further research is needed on this topic.

Due to its retrospective design, our study has some limitations. For example, the lack of original datum from our own studies as well as validation for main findings and conclusion. Nevertheless, with the inclusion of 15 variables and nearly 6400 patients in our cohort, the present study represents a well-balanced analysis of Ablation or SBRT treatment methods. Thus, in the absence of data from prospective trials, our findings can provide information that is useful for the management in inoperable patients with stage IA NSCLC.

According to the results of our study, no significant difference was observed in survival between inoperable patients with stage IA NSCLC who were treated with SBRT and ablation. Therefore, the quality of life after SBRT or ablation may be the main consideration for choosing the treatment method.

We would like to thank all the staff of the National Cancer Institute for their efforts in the SEER program.

Conception and design: L.L., S.S.X., and G.S.L. Acquisition, statistical analysis or interpretation of the data: all authors. Drafting of the manuscript: M.M.Z. F.Y.S. A.M.P. and G.F.Z. All authors reviewed and approved the final version of the manuscript.

We would like to thank all the staff of the National Cancer Institute for their efforts in the SEER program. This work was supported by the National Natural Science Foundation of China ([NSFC] no. 81802262), Shanghai Tenth Hospital's improvement plan for NSFC (no. 04.03.17.032, 04.01.18. 048), the Fundamental Research Funds for the Central Universities (no. 22120180584) and Shanghai Chongming district “sustainable development science and technology” (no. CKY2019-9).

All procedures performed in this study involving human participants are in accordance with the ethical standards of the institutional and/or national research committee and with the 1964 Declaration of Helsinki and its later amendments or comparable ethical standards. For this type of study, formal consent is waived.