Cervical cancer (CC) is the fourth most common gynecological malignancies worldwide, which also is the second most common type of cancer in females in developing countries [1, 2]. Although the vaccine against HPV and treatment efficacy has approved and reduced the incidence of infection, CC mainly causes approximately 311,000 deaths every year worldwide [3]. In previous years, the prompt operation, chemotherapy and radiotherapy have been elevated; however, due to the unclear molecular mechanisms of the genesis and development, CC maintains a public health concern all over the world.

In this study, lnc-SNHG16 was up-regulated in CC and lnc-SNHG16 knockdown inhibited cell proliferation, migration, and invasion and EMT process. Bioinformatics and molecular biological assays were used to investigate the relationship among lnc-SNHG16, miR-128, and its target genes of GSPT1 and WNT3A during the progress of tumorigenesis, and to illuminate the underlying molecular mechanisms. Taken together, we reported that lnc-SNHG16/miR-128 axis modulated the proliferation, migration and invasion and EMT process in vitro and tumor growth in vivo through the WNT/β-catenin pathway.

Forty-eight pair of human cervical tissues were used in our study, which was approved by the ethical review committees of Tianjin Medical University (NO. 2017TMUH0191). The samples were received from Tianjin Medical University Cancer Institute and Hospital from December 2017 to December 2018. The written informed consents were obtained from all enrolled patients. Patients did not receive chemotherapy or radiotherapy before surgery and CC was confirmed by pathological examinations. Tissues were placed in the RNA preserving solution, overnight at 4°C, and preserved at -80 °C until RNA extraction. This study was approved by the Ethics Committee of Tianjin Medical University and conformed to the protocols in the Helsinki declaration.

Primers for this study

C33A and HeLa cells in the logarithmic growth phase were seeded into 96-well plate at 5000 cells per well one day prior to transfection. Then, 10 μl CCK-8 reagent (Sigma) was added into each well and incubated at 37°C for 4 h. The absorbance was detected to evaluate the relative cell viability at 450 nm using the microplate autoreader (Hitachi, Ltd., Tokyo, Japan).

Animal protocols were approved by Tianjin Medical University Animal Care and Use Committee (LLSP2017-0198). The methods were conducted in accordance with the approved guidelines. For the in vivo study, 6-week-old female BALB/c athymic nude mice (Institute of Zoology, Chinese Academy of Sciences, Shanghai, China) were used [n=30; divided into 5 groups (pcDNA3, miR-128, pSilencer, shR-GSPT1 and shR-WNT3A), 6 mice per group; weight, 20-30 g; maintenance conditions: Temperature, 18-29˚C; relative humidity, 50-60%; free access to clean food and water; and lighting for 10 h (lights turned on at 8:00 every day and turned off at 18:00)]. A total of 100 µl of miR-128 or its control cell suspension (3×106 cell), shR-GSPT1 and shR-WNT3A or its control cell suspension (3×106 cell) was subcutaneously inoculated into the ventral forearm of nude BALB/c mice. At 30 day, the weight of all tumors was detected. Tumor weight was measured using an electronic scale, and the Student's t-test was used to compare tumor growth among groups.

EdU staining was performed using the Click-iTEdU imaging kit (Invitrogen) according to the manufacturer's instructions. Briefly, cells were exposed to 50 μM EdU for 2 h, then fixed with 4% formaldehyde. The cells were then treated with 2 mg/ mL glycine to neutralize the formaldehyde, then permeabilized with 0.5% Triton X-100. Finally, the cells were reacted with 100 μL of 1X Apollo reaction cocktail for 30 min, followed by incubation with 100 μL of Hoechst 33342 (5 μg/mL). Images were acquired using an Olympus IX-71 inverted microscope (Tokyo, Japan). The percentage of EdU-positive cells was calculated by dividing the number of EdU-positive cells by the number of Hoechst-stained cells.

HeLa and C33A Cells were seeded in 24-well plates the day before transfection. The cells were first transfected with Anti-miR-128 or pri-miR-128 expression vectors and were then transfected with the lnc-SNHG16 EGFP reporter vector wild type (wt) or EGFP reporter vector mutant (mut) on the next day. The red fluorescence protein (RFP) expression vector pDsRed2-N1 (Clontech) was spiked in and used for normalization. The cells were lysed with immunoprecipitation assay lysis buffer 48 h after transfection, and the proteins were harvested. The intensity of EGFP /RFP fluorescence was detected with a Fluorescence Spectrophotometer F-4500 (HITACHI, Tokyo, Japan).

The Cancer Genome Atlas database (TCGA, https://cancergenome.nih.gov/), which is a publicly accessible online database. Kaplan-Meier analysis was used to the online software of Kaplan-Meier Plotter (http://kmplot.com/analysis/).

The statistical analyses were practiced by GraphPad Prism (Version 5.0). All data are presented as the mean±standard deviation, and the experiments were repeated three times independently. Differences were analyzed with Student's t-test between two paired groups. For comparisons of three or more groups, one-way analysis of variance was followed by the Bonferroni post-hoc test for comparison of two selected treatment groups; the Dunnett's post-hoc test was used for comparisons of the other treatment groups with the corresponding controls. Associations between miR-128 or lnc-SNHG16 expression and clinicopathological characteristics were assessed using the χ2 test. A p value less than 0.05 was considered significant.

lnc-SNHG16 was up-regulated in cervical cancer 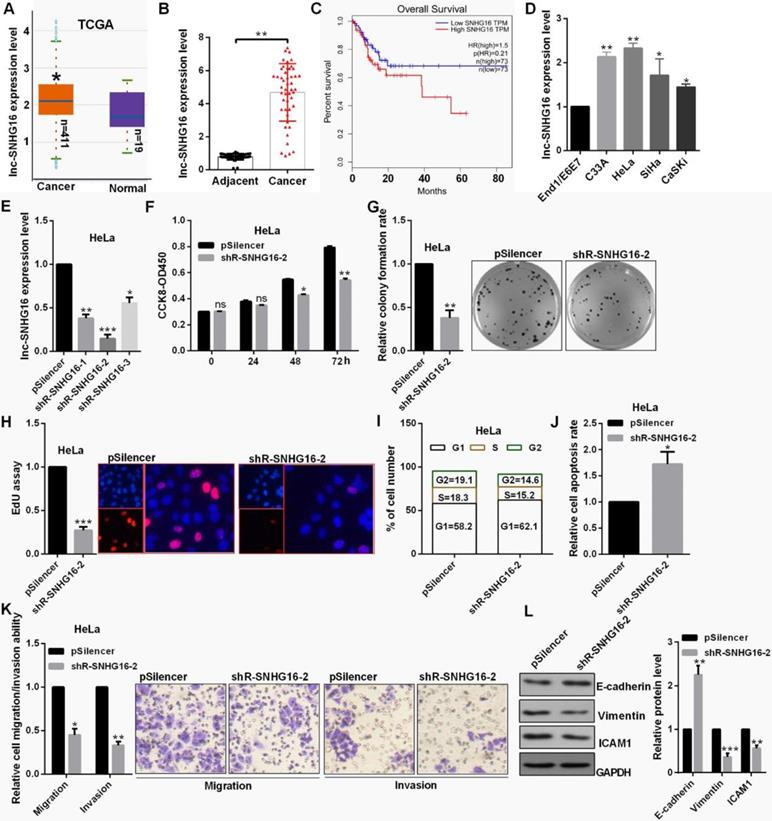 Association of lnc-SNHG16 with the clinicopathological features of patients

Association of miR-128 with the clinicopathological features of patients

miR-128 overexpression leads to cell growth inhibition in HeLa and C33A cells using CCK8 assay (Fig. 3A). Cell proliferation through the colony formation and EdU assay also exhibited an obvious attenuation of cell growth treated with pri-miR-128 in C33A and HeLa cells (Fig. 3B and 3C). Up-regulation of miR-128 could induce a significant G1 to S phase arrest in C33A and HeLa cells (Fig. 3D). In addition, apoptotic rate was increased in cells transfected with pri-miR-128 (Fig. 3E). Transwell assays demonstrated that miR-128 overexpression inhibited cell migration, invasion in C33A and HeLa cells (Fig. 3F and 3G). Pri-miR-128 decreased the protein expression level of Vimentin and ICAM1 and promoted the expression level of E-cadherin protein (Fig. 3H). The average weights of tumors in miR-128-transfected group were smaller than those in the control group and IHC revealed the significantly decreased Ki67 expression in miR-128-transfected group (Fig. 3I and 3J).

The level of GSPT1 and WNT3A in CC 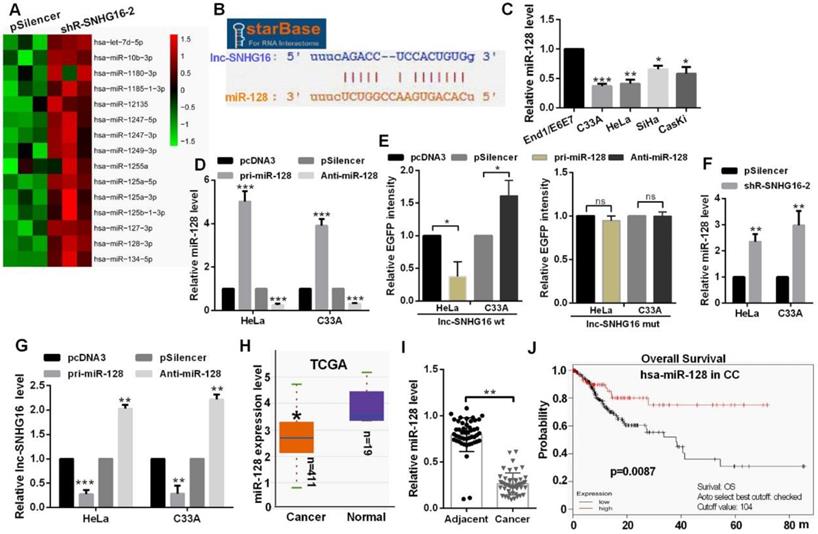 miR-128 inhibited proliferation, EMT process and tumor growth. (A) Effect of miR-128 on cellular viabilities of C33A and HeLa were detected by CCK8. (B and C) The proliferation ability of C33A and HeLa cells transfected with pri-miR-128 or Anti-miR-128 were detected by colony formation and EdU assay. (D) Flow cytometric analysis showed that overexpression of miR-128 leads to an increase of the G0/G1 phase. (E) Flow cytometric assay showed overexpression of miR-128 promoted cell apoptosis in CC cells. (F and G) Transwell assays revealed that miR-128 suppressed invasion and migration ability in HeLa and C33A cells. (H) Western blot analysis of the indicated protein expression levels in HeLa cells following treatment with pri-miR-128 or Anti-miR-128 and the control groups. (I and J) miR-128 overexpression inhibited tumor growth rate and tumor weight following with the down-regulation of Ki67 using IHC. Experiments were performed 3 times, and data are presented as means ± SD.*P<0.05; **P<0.01; ***P<0.001; ns, not significant. 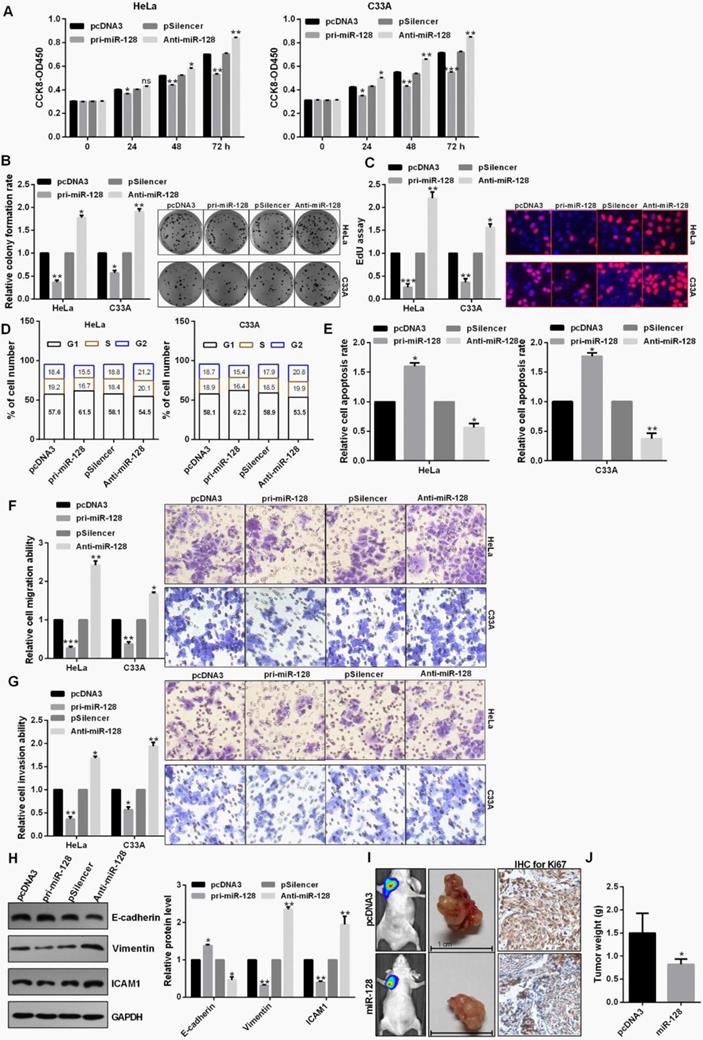 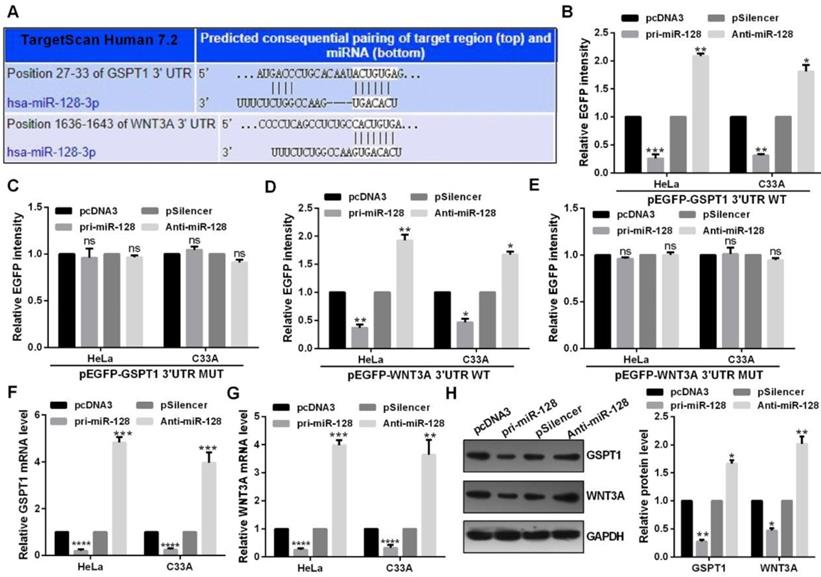 Increasing evidence have demonstrated that lncRNAs, which act as a competing endogenous RNA (ceRNA), could regulate the role of miRNAs in many cancers [18-20]. For example, LINC00958 deletion prevented tumor initiation by sponging the miRNA-330-5p to regulate PAX8 expression in pancreatic cancer [21]. In addition, lncRNA CACS15 by positively regulating ABCC1 contributed to oxaliplatin resistance through the miR-145 in CRC [22]. Dong et al demonstrated that TINCR promoted trastuzumab resistance and EMT process by sponging the miRNA-125b in breast cancer [23]. In this study, we demonstrated that lnc-SNHG16, which acts as a competing endogenous RNA of miR-128, regulates the CC progression. So, the precious results and our present study demonstrated lnc-SNHG16 could be target for prevention and therapeutics for CC in future.

miR-128 was low expression in osteosarcoma [24], glioma [25], ovarian cancer [26], thyroid cancer [27], HCC [28], CRC [29], gastric carcinoma (GC) [30]. However, the role and mechanism of miR-128 remains unclear in CC. In this study, miR-128 was down-regulated in CC, which was negatively correlated with TNM stage, metastasis, tumor size, and poor prognosis. Overexpression of miR-128 inhibited tumor growth and cell proliferation through the regulation of apoptosis and cell cycle. Transwell analysis revealed that miR-128 overexpression inhibited cell invasion and migration. In addition, miR-128 could directly target GSPT1 and WNT3A in CC cells.

WNT3A, one of the Wnt family members, plays important roles in regulating cellular functions of proliferation, apoptosis, cell cycle, and so on [34]. WNT3A was up-regulated in GC [35], prostate cancer cells [36], breast cancer [37, 38], which was also up-regulated in oral squamous cell carcinoma and glioma stem cells compared with control nonmalignant tissues [39, 40]. In this study, we reported that up-regulated WN3A functions as an oncogene in CC. Furthermore, we found that lnc-SNHG16 activated and miR-128 inactivated the WNT/β-catenin pathway by regulating the WNT3A.

In conclusion, we illuminated a new pathway in lnc-SNHG16 regulated miR-128 directly targeting GSPT1 and WNT3A on growth and metastasis through the WNT/β-catenin signaling pathway. Our experimental data also suggested that the lnc-SNHG16/miR‐128/WNT/β-catenin axis may be a promising therapeutic target for CC or other cancers. 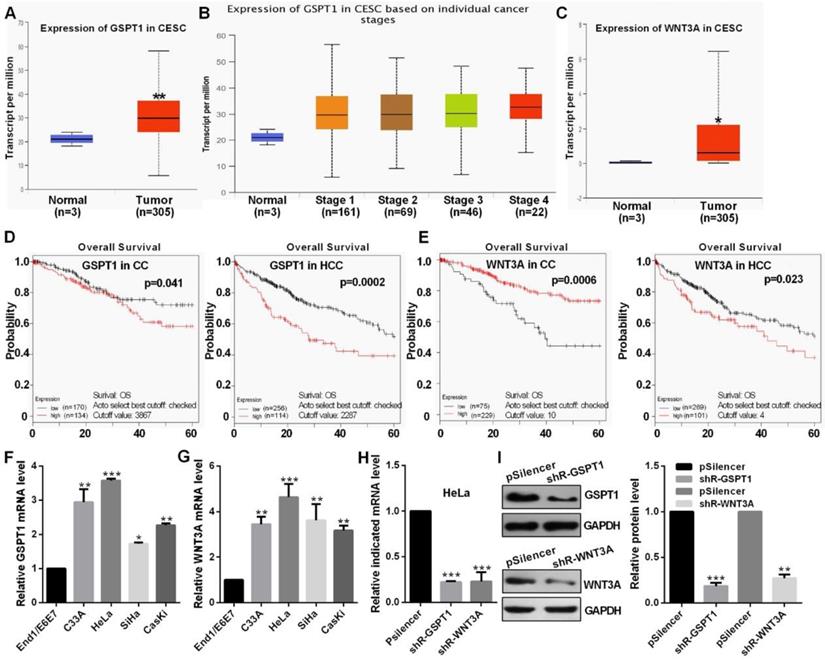 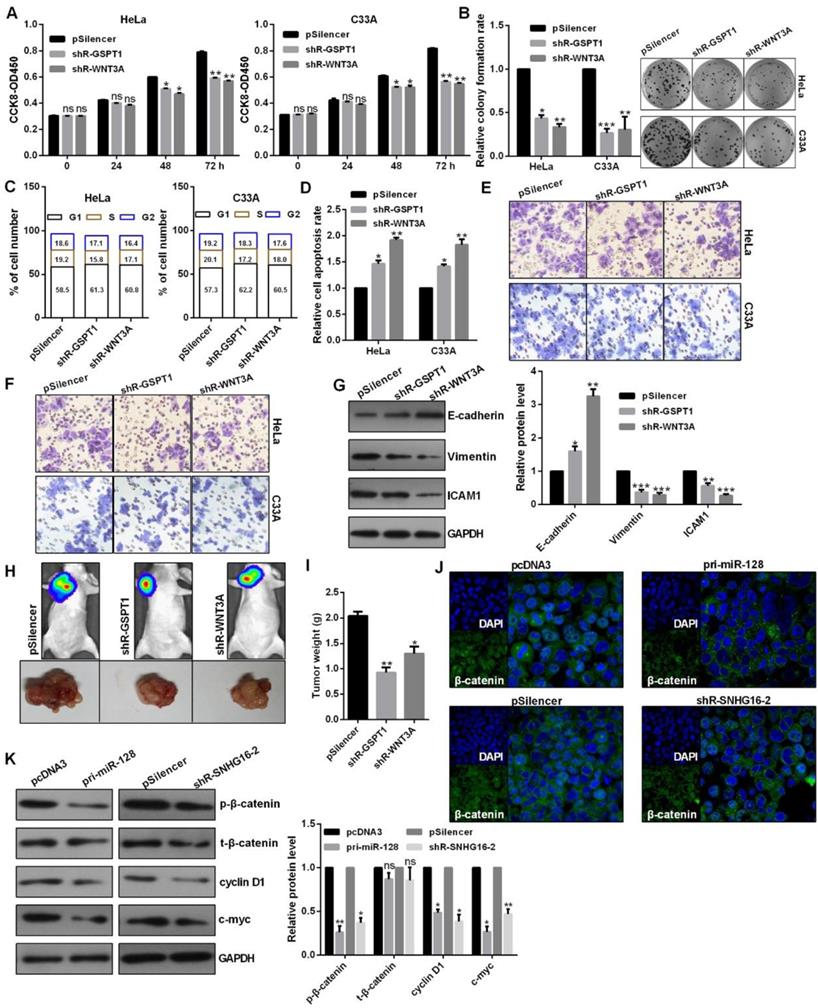 The authors would like to acknowledge the beneficial comments on this paper received from reviewers.

ZY and YBL designed the study. ZLL collated the data, and designed and developed the database. WW performed the data analyses and produced the initial draft of the manuscript. WW, LG and ZLL obtained the results and validated them. All authors read and approved the final manuscript.

The present study was approved by the Ethics Committee of Tianjin Medical University and informed consent was obtained from all patients prior to the study.