Methods: Patients with FIGO Ib1-IIa cervical cancer who were treated with radical hysterectomy at the first affiliated hospital of Guangxi Medical University, China were included in the study. iASPP and METTL3 expression in the tumor specimens and adjacent non-tumor cervical tissues was determined by immunohistochemistry and western blot, and its relationship with clinicopathologic factors and prognosis of cervical cancer patients was analyzed.

Conclusions: iASPP and METTL3 levels were elevated in cervical cancer, and they were both independent indicators for poor prognosis in early stage cervical cancer patients.

Methyltransferase-like 3 (METTL3), a major RNA N6-adenosine methyltransferase, participates in the tumorigenesis of various tumors. Transcriptome-wide m6A profiling further showed that m6A modification is presented in thousands of RNA transcripts with unique distribution patterns [11, 12]. However, the functional roles of m6A methylation in cancer initiation and progression remain to be determined. METTL3 is significantly increased in gastric cancer tissues compared with control in big crowd data sets and served as a poor prognostic factor for patients with gastric cancer [13]. The expression of METTL3 gradually increased with the progress of tumor stage and grade, but METTL3 knockdown inhibited cell proliferation, migration and invasion in human gastric cancer cells [14]. Moreover, knockdown of METTL3 also inhibited the growth of lung cancer by inducing apoptosis via PI3K/AKT pathway [15]. These data suggest that METTL3 plays an important role in the progression of cancer and may act by inhibiting apoptosis. However, the expression of METTL3 and the relationship between METTL3 expression and clinicopathological characteristics or prognosis of cervical cancer have not been shown.

A total of 112 patients with cervical cancer were enrolled from patients treated at the first affiliated hospital of Guangxi Medical University in China between January 2013 and December 2015. The criteria for patient inclusion were as follows: (1) pathologically confirmed patients with FIGO Ib1-IIa (2009 FIGO staging) squamous cell cervical cancer; (2) radical hysterectomy and bilateral pelvic lymph-node (LN) dissection were performed in our hospital with or without preoperative adjuvant therapy, patients who had matched fresh surgical specimens and adjacent normal cervical tissues; (3) no previous history of other cancers; (4) the clinical data and the follow-up information were complete. The exclusion criteria included: (1) patients who underwent palliative surgery; (2) patients who had distant metastasis or peritoneal dissemination that was confirmed during the operation. Prior informed consent was obtained from all patients, and the study was approved by the Ethics Committee of The First Affiliated Hospital of Guangxi Medical University.

This was a retrospective analysis of the clinical data of patients with cervical cancer. The expression levels of iASPP and METTL3 were analyzed in the surgical tumor specimens and adjacent non-tumor cervical tissues specimens and then the patients were grouped according to their level of expression of the two proteins.

Among the patients, 35 (31.3%) cases received 2-3 cycles of chemotherapy before operation. The chemotherapy regimens were paclitaxel at 175 mg/m2 on day 1, cisplatin at 60 mg/m2 on day 1; repeated every 3 weeks. Concurrent chemoradiation therapy was added after the operation in cases with risk factors such as pelvic LN metastasis, positive resection margin and parametrial invasion. The chemotherapy regimen was cisplatin 40mg/m2 on day 1 per week with a total of 4-5 cycles. The total dose was 50 Gy delivered at 2.0 Gy per daily fraction, with five fractions per week.

All paraffin embedded sections were cut at 5-μm thickness followed by deparaffinization. Antigen recovery was performed in heat activated antigen retrieval pH 6 for iASPP and METTL3, and then specimens were incubated with 3% H2O2 for 10 min. Non-specific binding was blocked with protein block for 20 min at room temperature. The sections were incubated with rabbit polyclonal anti-iASPP antibodies (bs-0284R, 1:400, Bioss, Beijing, China) or with rabbit polyclonal anti-METTL3 antibodies (bs-17609R, 1:400, bioss, Beijing, China) at 4°C overnight, and then the sections were incubated with an anti-rabbit secondary antibody (Zhongshan Goldenbridge Biotechnology, Jiangsu, China) at 37°C for 30 min, washed with PBS for 5 min, and stained with diaminobenzidine for 5 min. Immunohistochemical staining was scored by using a four-point scale according to the percentage of positive cells: 0, <10% positive; 1+, 11%-25% positive; 2+, 26%-50% positive; 3+, >51% positive. The protein expression of iASPP and METTL3 in cervical cancer specimens was thus divided into a low-expression group (0 or 1+) and a high-expression group (2+ or 3+). Immunohistochemical analysis and scoring were performed by two independent investigators.

Total protein was extracted and separated by sodium dodecyl sulfate polyacrylamide gel electrophoresis and then transferred onto polyvinylidene difluoride membranes, which were blocked with 5% nonfat milk for 1-2 h at room temperature. The blotted membranes were incubated over night at 4°C with the following primary antibodies: rabbit anti-iASPP antibody (bs-0284R, 1:1000, Bioss, Beijing, China), rabbit anti-METTL3 (bs-17609R, 1:1000, Bioss, Beijing, China), and then was followed by incubation with anti-rabbit (1:5000) secondary antibody for 2h at room temperature. Bands were detected by enhanced chemiluminescence and exposure to X-ray films (FluorChem HD2, Santa Clara, CA USA).

The statistical results were analyzed by using SPSS version 17.0 (SPSS Inc., Chicago, IL, USA). Numerical variables were recorded as means ± standard deviation (SD) and analyzed by independent t-tests. Categorical variables were presented as rates and analyzed by using the chi-square test or Fisher's exact test. The chi-square test was used to evaluate the association between iASPP and METTL3. Kaplan-Meier survival analysis was performed to determine the association of iASPP and METTL3 expression with survival, and the survival curves were compared between groups using log-rank tests. Multivariate Cox-regression analyses were conducted to identify independent prognostic factors. p<0.05 (two sides) were considered statistically significant.

We checked the expression of iASPP and METTL3 in the UALCAN datasets (http://ualcan.path.uab.edu/index.html), the data of which comes from TCGA, and found that iASPP expression is significantly elevated in cervical cancer compared with the normal tissues (Figure 1A). The expression of METTL3 was up-regulated in cervical cancer although no statistical significance was achieved (Figure 1B). We then examined the protein level of iASPP and METTL3 in the samples from a cohort of 112 cervical cancer patients by immunohistochemistry. In line with the UALCAN data, iASPP expression was significantly higher in tumor tissues than in adjacent normal cervical tissues (ANCT) (Figure 2A-B). Besides, METTL3 expression was dramatically elevated compared with normal tissues (Figure 2C-D). Consistent with the immunohistochemistry, iASPP and METTL3 protein expression in cancer tissues when quantified through western blot analysis in comparison with the β-actin loading control was also significantly higher than that in ANCT (Figure 3). 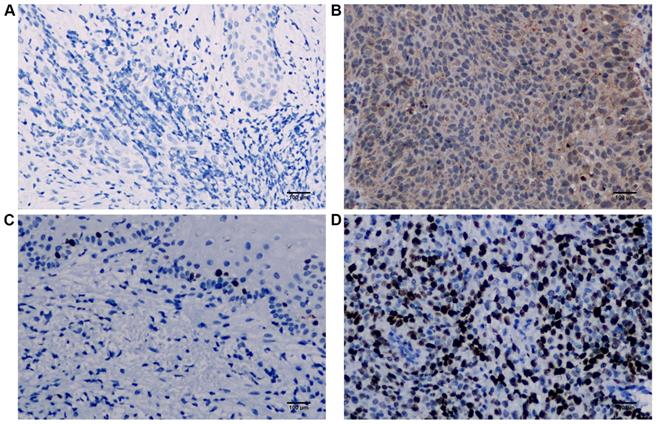 We next examined the association between iASPP and METTL3 expression. In 112 cervical cancers, iASPP expression presented a significant correlation with METTL3 (p = 0.002; Table 2). 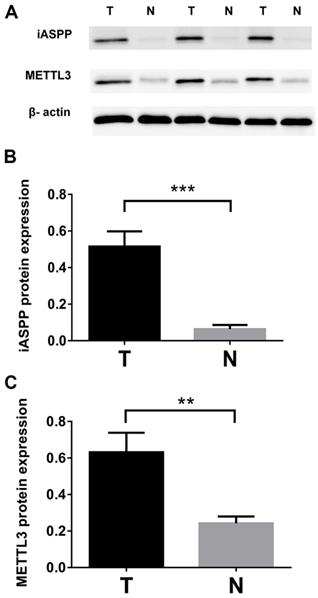 Association of iASPP and METTL3 expression in cervical cancer patients. 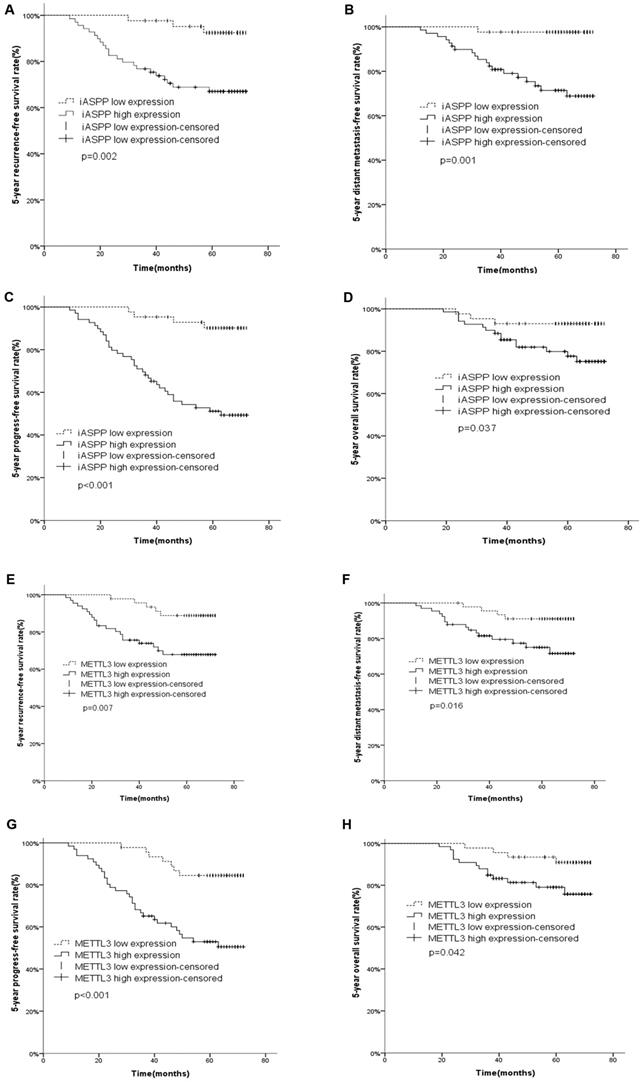 Multivariate survival analysis of the association between prognostic variables and survival in cervical cancer patients.

In the present study, we detected iASPP expression profiles in early stage squamous cell cervical cancer and then analyzed the correlation of its expression with clinicopathologic factors and the long-term prognosis. Our results showed that elevated iASPP expression correlated with higher FIGO staging and more pelvic lymph node metastasis, and poor RFS, DMFS, PFS and OS. These data, consistent with previous studies [3-10], indicated that iASPP, as a newly identified oncoprotein, was involved in the carcinogenesis and progression of early stage cervical cancer and might serve as novel potential therapeutic target. Dong et al. [4] demonstrated that miR-124, directly targeting iASPP, reduces expression of iASPP and attenuated cervical cancer cell growth and invasiveness.

In this study we found that MRTTL3 was overexpressed in cervical cancer. The elevated expression correlated with higher FIGO staging and more pelvic lymph node metastasis, and poor RFS, DMFS, PFS and OS. METTL3 expression was also an independent prognostic factor. We presume that METTL3 is involved in a similar mechanism to other cancer types. Lin et al. [16] revealed that METTL3 enhances the translation of oncogenes and promotes the proliferation and invasion of lung cancer cells. Chen et al. [17] reported that METTL3 was significantly upregulated in human hepatocellular carcinoma (HCC) and was associated with poor prognosis. Knockdown of METTL3 drastically reduced HCC cell proliferation, migration, and colony formation in vitro. Knockout of METTL3 significantly suppressed HCC tumorigenicity and lung metastasis in vivo. These data suggested that METTL3 may act as an oncogene and participate in tumor progression.

Protein-protein interactions (PPI) are at the core of numerous cell death pathways such as apoptosis, autophagy, and necrosis [18]. Affecting specific PPI involved in these pathways can change the fate of cells. iASPP plays an important role in regulating p53 dependent apoptosis and acts as a negative regulator of the tumor suppressor p53 [19]. iASPP overexpression was discovered in tumor tissues and moreover associated to poor prognosis and survival in some types of cancers [5-9]. Targeted suppression of iASPP may serve as the mechanism by which its upstream protein prevents oncogenesis of cancer [19, 20]. METTL3 was originally known to be responsible for m6A modification of mRNA. Recent studies have found that METTL3 plays important roles in a variety of tumors by regulating the translation of oncogenes [16, 21]. METTL3 knockdown decreased Bcl2 and increased Bax and active Caspase-3 in gastric cancer cells, which suggested the apoptotic pathway was activated [14]. The PI3K/Akt pathway is implicated in cell growth and survival, and Wei et al. [15] observed that knockdown of METTL3 changed the expression and phosphorylation of proteins of PI3K signaling pathway members. Besides, the Bax/Bcl-2 ratio in lung cancer cells was increased by the transfection of miRNA of METTL3, which suggested that apoptosis was inhibited in cancer cells. Based on these data, we raised the hypothesis that the interaction between iASPP and METTL3 is required for apoptosis activation in cancer cells. In this study, we preliminarily found that iASPP expression presented a significant correlation with METTL3. We speculate that this interaction may uncover a new layer in the highly complex regulation of cell death in cancer cells and open new avenues of exploration into the development of novel anticancer drugs that reactivate apoptosis in malignant tumors. However, this needs further study to confirm a direct interaction between the two proteins.

This study has some limitations. One limitation of this study is that some of the patients included in this study had neoadjuvant treatment, which might have effect on iASPP expression and outcome. This is only a preliminary finding on the correlation of iASPP and METTL3. The interaction between the two proteins is still unclear, and further study needs to be conducted to fully understand the potential involved molecular mechanism.

This work was supported by the Program for Improvement of Scientific Research Ability of Young and Middle-Aged Scholars of Higher Education of Guangxi, China (2017KY0104) and Project of Development and Application of Appropriate Medical and Health Technologies in Guangxi, China (S2018025).