Results: Adipocyte-derived conditioned media increased the proliferation and migration of MCF-7 and MDA-MB-231 cells while little effects in a human normal immortalized mammary epithelial cell line MCF10A. In addition, adipocyte-derived conditioned media induced phosphorylation of AKT and mTOR and upregulated the expression of target genes of the PI3K-AKT-mTOR pathway including IL6, IL1β, IL1α and TNFα in breast cancer cells. Furthermore, BEZ235 a dual inhibitor of PI3K and mTOR significantly decreased the adipocyte-mediated the proliferation and migration of breast cancer cells.

Conclusion: Adipocyte-derived conditioned media enhance the proliferation and migration of breast cancer cells through the PI3K-AKT-mTOR pathway, supporting the importance of heterotypic interactions between breast cancer cells and adipocytes in the tumor microenvironment.

Breast cancer has been the most commonly diagnosed cancer and the leading cause of cancer death in women over the world [1]. Recent Investigation of the estimated numbers of new cancer cases and deaths in the United States in 2019 noticed that breast cancer is again expected to be the most common cancer accounting for 30% of all new cancer diagnoses and the second leading cause of cancer-related death in women [2].

Fibroblasts, endothelial cells and immune cells in the tumor microenvironment have been paid attention because their heterotypic interactions with cancer cells or themselves play major roles in cancer growth and progression [3, 4]. However, adipocytes, a major component of the normal breast and the tumor microenvironment in breast cancer, have been increasingly recognized as another dominant player for breast cancer progression. Recent studies using animal models, in vitro co-culture systems and adipocyte-derived conditioned media have suggested that cancer-associated adipocytes stimulate the proliferation, invasion, migration, and metastasis of breast cancer as well as its resistance to various therapeutic treatments including chemotherapy and radiotherapy [5-7]. Adipocyte-derived soluble factors called adipokines including adiponectin, leptin, IL-6, IL1β, and TNFα have known to be involved in the breast cancer progression through their receptors [6, 8]. AMPK is noticed to regulate the expression of IL-6 and IL-8 in adipocytes, suggesting that targeting AMPK in adipocytes could be a novel way to modulate obesity-related adipokine production associated with insulin resistance and breast cancer progression [9]. In addition, adipocytes, as well as obesity in breast cancer patients, are closely related with the increased resistance to chemotherapy including trastuzumab and docetaxel leading to the challenges for the clinical management of the tumor [10]. Recent studies have focused on what signaling molecules adipokines regulate in the pathogenesis of breast cancer. Adipocytes-derived leptin and IL-6 have known to activate Jak/STATs and PI3K/AKT pathways and to increase the expression of Lysyl Hydroxylase-2 in breast cancer cells leading to tumor progression including epithelial-mesenchymal transition and metastasis [11, 12]. However, more detailed molecular mechanisms of the adipocyte-induced tumor progression still need to be uncovered yet in breast cancer.

The PI3K-AKT-mTOR pathway is one of the most frequently dysregulated pathways in the pathogenesis of breast cancer associated with crucial cellular functions including survival, proliferation, invasion, and metabolism as well as with poor clinical outcome of the patients [13, 14]. The PI3K-AKT-mTOR pathway is generally initiated by the interaction of PI3K with either G-protein coupled receptors (GPCRs) [15] or receptor tyrosine kinases (RTKs) such as insulin-like growth factor 1 receptor (IGF-1R) [16] and ErbB family receptors [17]. Recent findings have suggested that the PI3K-AKT is involved in the adipokine-induced tumorigenesis in breast cancer [12, 17]. In the present study, we investigated the importance of the PI3K-AKT-mTOR signaling pathway for the adipocyte-induced breast cancer cell proliferation and migration using the adipocyte-derived conditioned media.

Reagents and cell culture. All processes for cell culture experiments were followed by standard Biosafety Level 2 (BSL‑2) guidelines. All cell lines used in this study were tested whether there is any mycoplasma using mycoplasma detection kits (JCBIO, Songpa-gu, Seoul, South Korea). Human breast cancer MCF-7 and MDA-MB-231 cell lines and a human normal mammary epithelial MCF10A cell line were previously described [18]. All cells were cultured in a humidified incubator with 5% CO2 at 37˚C and the viability of cultured cells was monitored using a LUNA-FL Automated cell counter (Logos Biosystems, Inc., Anyang, Republic of Korea). BEZ235 was purchased from Selleckchem (Houston, TX, USA). Insulin and dexamethasone were purchased from Sigma Chemical Co (St. Louis, MO, USA). All other chemicals and reagents without notice were purchased from Sigma Chemical Co (St. Louis, MO, USA).

Conditioned media derived from 3T3-L1- and hAMSC-differentiated adipocytes. 3T3-L1 cells were kindly provided by Dr. Hyang-Kyu Lee (College of Nursing, Yonsei University). 3T3-L1 preadipocytes were maintained in DMEM containing 10% calf serum at 37℃ under 5% CO2 atmosphere. After reaching the confluence, the differentiation of 3T3-L1 preadipocytes to adipocytes was induced by treatment with insulin (1 μg/ml), dexamethasone (1 μM), and 3-isobutyl-1-methylxanthine (500 μM) in DMEM containing 10% FBS (Thermo Fisher Scientific, Gibco FBS 26140-079, Waltham, MA USA) for 2 days. The induction medium was replaced with DMEM containing 10% FBS and insulin (1 μg/ml) and the cells were cultured for two more days. Then the cells were washed with PBS and replaced with fresh DMEM containing 10% FBS every other day. Conditioned media (CM) from mouse 3T3-L1-derived adipocytes (mCM) were collected 8 days after differentiation. Human adipose tissue-derived mesenchymal stem cells (hAMSC) and the preparation of CM from hAMSC-derived adipocytes (hCM) were previously described [19].

Colony formation assays. Cells were seeded into 24-well plates (100 cells/well) in 1 ml of medium containing 10% FBS, and one day later were treated with conditioned media (mCM or hCM) for 2 weeks. The cells were stained for 30 min with a solution containing 0.5% crystal violet and 25% methanol, followed by three-time rinses with tap water to remove excess dye.

Wound healing assays. Cells were seeded into six-well plates and incubated for 24 hours until reaching ~90% confluency. 200-μl pipette tips were used to make scratches in the center of each well. Several regions were marked and photographed (×20 magnification) at 0 and 18 hours after incubating the scratched cells with mCM or hCM.

Statistical analysis. Data are presented as mean ± standard deviation (SD). Differences between the means of each group were analyzed using Excel's t-test and P values of <0.05 were considered significant. The statistical software package Excel (Microsoft, WA, USA) was used for the analysis.

Adipocyte-derived conditioned media dominantly activate the PI3K-AKT-mTOR pathway. To determine the mechanism by which CMs increases the proliferation of breast cancer cells, we evaluated the activation of upstream signaling molecules related to inflammation- and metabolism-induced proliferation of breast cancer cells. In MCF10A cells, mCM upregulated the phosphorylation levels of only AKT, but not others STAT3, mTOR and AMPK (Supplementary Fig. 1C). However, both mCM and hCM significantly increased the phosphorylation levels of AKT and mTOR in MCF-7 and MDA-MB-231 cells while little effects on the phosphorylation of STAT3 and AMPK (Fig.2). These results suggested that adipocyte-derived CM preferentially induces the PI3K-AKT-mTOR signaling pathway in breast cancer cells.

Effects of mCM and hCM on the proliferation of breast cancer cells. (A) MCF-7 and MDA-MB-231 cells were treated with mCM or hCM for 24, 48 and 72 hours. Cell viability was then analyzed using MTT assays. Data are presented as the mean ± SD (*P < 0.05 versus mock-treated control). (B) Cell proliferation of MCF-7 and MDA-MB-231 was evaluated by colony forming assays. Cells were seeded into 24-well plates and then treated with mCM or hCM for 2 weeks. Colonies were visualized by crystal violet staining. - and + means without and with CM, respectively. 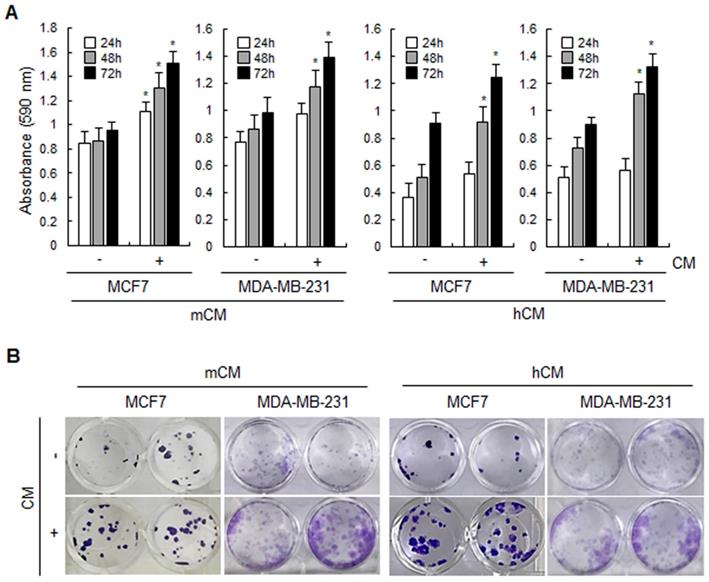 Effects of mCM and hCM on the activation of AMPK, AKT, mTOR, and STAT3 in breast cancer cells. MCF-7 and MDA-MB-231 cells were treated with mCM or hCM for 24 hours. Whole cell lysates were prepared and subjected to Western blotting with the indicated antibodies. β-actin was used as an internal control. 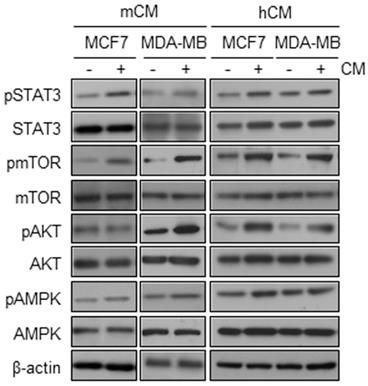 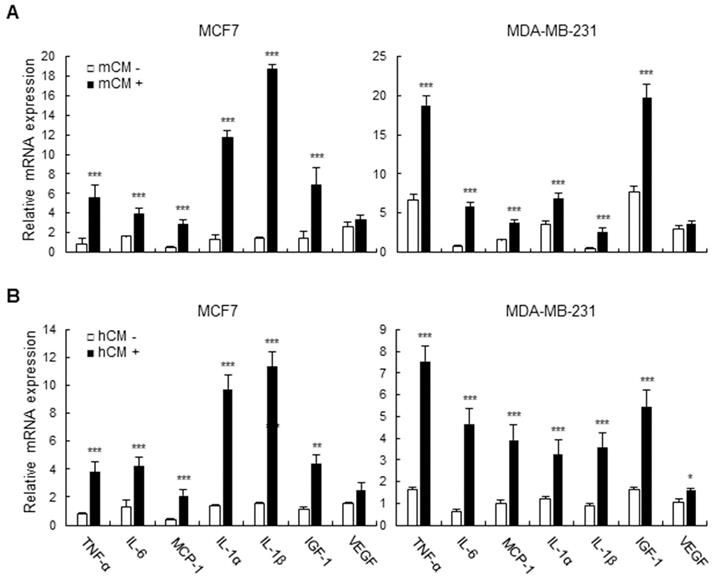 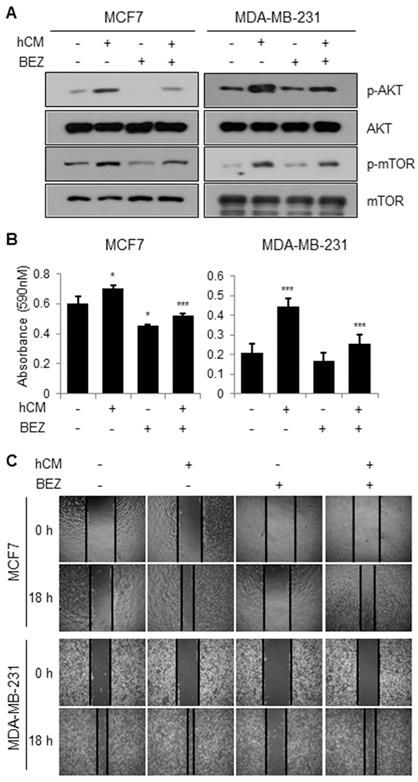 Estrogen receptor (ER), progesterone receptor (PR) and human epidermal growth factor 2 (HER2/neu) are essential biomarkers in breast cancer. Standard pathological features seem adequate to define clinically useful groups depending on the status of the three biomarkers such as triple-negative, hormone receptor-negative and HER2-positive and hormone receptor-positive\and HER2-positive tumors for which treatment recommendations are seldom controversial [22]. Although improvement of therapeutic strategies for breast cancer over the last decades has led to improved survival rates of breast cancer patients, breast cancer is still the leading cause of cancer death due to a variety of hurdles including drug resistance, recurrence and severe side effects [1].

Recent studies have noticed that the adipocyte-derived tumor microenvironment plays crucial roles in tumor progression of various types of human cancer including breast cancer [5, 7, 9, 23]. We in the present study also notice that adipocyte-derived CM stimulate the proliferation and motility of breast cancer cells. These results suggest that adipocytes in the tumor microenvironment play an important role in breast cancer progression through the heterotypic interactions between adipocytes and tumor cells. In addition, we present that the PI3K-AKT-mTOR pathway is crucial for CM-mediated the proliferation and migration of breast cancer cells. The PI3K-AKT-mTOR pathway is a complicated intracellular signaling pathway, which responds to nutrients, hormones and growth factors and plays various significant roles in tumor progression including proliferation, motility, survival, angiogenesis and drug resistance [12-14, 22]. Because of the importance of the PI3K-AKT-mTOR pathway in the pathogenesis of breast cancer, many targeted inhibitors are currently in clinical trials. Inhibitors of PI3K/AKT/mTOR are classified into four categories: PI3K inhibitors, AKT inhibitors, mTOR inhibitors, and dual PI3K/mTOR inhibitors [24]. The most popular inhibitor for mTOR is rapamycin that directly binds to its kinase active domain [25]. The classical inhibitors of PI3K are wortmannin and LY294002 that decreased cellular proliferation and induced apoptosis in both in vitro and animal models [26]. Development of dual inhibitors such as targeting PI3K and mTOR has been intensively invested [27]. Accordingly, BEZ235, a PI3K and mTOR dual inhibitor has been investigated as a possible treatment in breast cancer by inducing cell cycle arrest and apoptosis [28-31]. However, the pathway and the inhibitor BEZ235 has not been analyzed in the context of heterotypic interactions between breast cancer cells and adipocytes, which are main cellular components especially in obese conditions. A recent review noticed that the efficacy of cancer treatments is significantly lower in obese breast cancer patients [32]. Our results in the present study suggest that the PI3K-AKT-mTOR pathway is crucial in the adipocyte-mediated breast cancer progression and that dual inhibitors targeting PI3K and mTOR such as BEZ235 could be a good option to inhibit the obesity-breast cancer link. Further studies with clinical samples of breast cancer patients under between normal and obesity conditions are warranted to provide clinical relevance of our findings and then to pave the way for developing novel therapeutic interventions for the disease under various conditions.

Taken together, we support that adipocytes in the tumor microenvironment induce breast cancer progression through activating the PI3K-AKT-mTOR signaling pathway, suggesting inhibition of dual target such as PI3K and mTOR as a potentially good option for developing a novel targeted therapy for breast cancer.