The long, noncoding RNA (lncRNA) PVT1, as an important epigenetic regulator, has a critical role in carcinogenesis. However, its role in pancreatic ductal adenocarcinoma (PDAC) has not been fully investigated. Here, the up-regulated expression of lncRNA PVT1 is found in our PDAC tumor samples. Knockdown of it suppressed PDCA cells growth and glycolysis. An inverse association between miR-519d-3p and PVT1 was found. RIP, RNA pulldown and luciferase assay showed that PVT1 directly targets miR-519d-3p by binding with microRNA binding site. Bioinformatics analysis and study indicated that HIF-1A is a target of miR-519d-3p. Collectively, our findings suggested that PVT1 could act as an oncogenic lncRNA, and promote tumor progression by regulating HIF-1A via competing with miR-519d-3p.

Pancreatic ductal adenocarcinoma (PDAC) is one of the most aggressive cancers with very poor prognosis despite recent advances in treatments [1]. The exact molecular mechanisms of PDAC still need to be explored. Understanding the molecular mechanism of PDAC could be helpful to identify novel therapies.

Long noncoding RNAs (lncRNAs), as a class of functional RNA transcripts at 200 to 100,000 nt, have been implicated many human diseases[2]. Recent studies showed that lncRNAs could act as molecular sponges to compete microRNAs (miRNAs) [3].

Recent studies have shown that amplification of the lncRNA plasmacytoma variant translocation 1 (PVT1) contributes to the pathophysiology of cancers, including pancreatic cancer [6], [7], [8], [9]. Increased expression of the lncRNA PVT1 in cancer tissue is associated with poor prognosis in pancreatic cancer patients [10]. The salivary levels of PVT1 were significantly higher in PDAC group[11]. Downstream genes containing binding site of miR-519d-3p in 3'UTR of PVT-1 were analyzed by bioinformatics and previous reports[12]. miR-519d-3p has been found to be a tumor repressor in colorectal and breast cancers [13], [14]. But, the role of miR-519d-3p in PDAC is still unclear. PVT1 has been reported to sponge miR-519d-3p to facilitate invasion and proliferation in laryngeal squamous cell cancer[15]. However, the mechanism of PVT1 by regulating the miR-519d-3p/ HIF-1 in cell metabolism remains largely unknown.

From 2017 to 2018, 30 PDAC patients which could be simultaneously obtained the tissue samples and the adjacent noncancerous tissue samples surgically were enrolled in the current research at Hubei Cancer Hospital (Wuhan, China). All participants provided written informed consent prior to enrollment. None of the patients received any pre-operative treatments prior to sample collection. All patients' pathology results were confirmed by pathology after operation. Normal tissues were taken from the same patient at >1 cm from the edge of the primary tumor. Fresh samples were snap-frozen in liquid nitrogen and stored at -80°C prior to RNA isolation. Hubei Cancer Hospital Ethics Committees approved this study([2018]KYLL-07).

PDAC cells were preincubated with biotinylated miR-519d-3p. Magnetic beads were used and then been washed. qRT-PCR was performed to measure the eluted RNA.

Cells were seeded in a 96-well plate And the cells were used by MTT assay Kit(Thermo, USA) at 24, 48, and 72 h and then the absorbance measured by microplate spectrophotometer (Molecular device, USA) at 490 nm.

Transfected PDAC cells were cultured in a special medium in six-well plate for 14 days. Cells were fixed with and stained for counting.

The binding target sites of PVT1 and miR-519d-3p were predicted using TargetScan (http://targetscan.org/) and Microrna (http://www.microrna.org/). Expression pattern of PVT1 in a cohort of PDAC patients in TCGA (https://tcga-data.nci.nih.gov/tcga).

HIF-1A antibody was obtained from Santa Cruz Biotechnology. LDHA, GLUT1, β-actin and HK2 antibodies were purchased from Cell Signaling. The membrane was incubated with these antibodies and then with a horseradish peroxidase-conjugated secondary antibody for 1 h. Protein concentration was visualized by enhanced chemiluminescence (Cell Signaling Technology) and determined by BCA method.

Cells were incubated in plates until cells reached a 90% confluence, and then incubated for 24 h after scratching with a 200-ml tip. The mean migrating length was assessed by photography.

Data are expressed as the mean ± SD. Student's t-test was used to compare the continuous variables. Kaplan-Meier survival curves were compared using the log-rank test for survival analysis. P values < 0.05 was defined as significant. Statistical analyses were carried out using SPSS 18.0.

PVT1 is overexpressed in human PDAC and decreases patient survival

qRT-PCR assay showed increased level of PVT1 in PDAC tissues in comparison with corresponding noncancerous tissues in 30 patients (Fig. 1A). We further investigated the correlation between PVT-1 mRNA expression and clinicopathologic parameters in patients (Tab. 1). High PVT-1 expression, which was defined as being above the median, correlated significantly with lymph node metastasis (P = 0.004). We also found higher PVT1 mRNA level in representative PDAC cell lines (HPAC, DANG, BXPC3, PANC1, and ASPC-1) vs. the human normal pancreatic ductal epithelial cell line H6C7 (P < 0.05). HPAC cells had the highest level of PVT1 mRNA among the five PDAC cell lines and, therefore, were selected for the subsequent functional experiments. Survival analysis was analyzed to found that the relation between high PVT1 level and poor survival was positive (Fig. 1C).

Correlation of PVT-1 expression to clinicopathologic features in PDAC

Values of P were calculated by the Spearman's rank-correlation test. pTNM stage refers to the pathological tumor node metastasis (pTNM) stage designed jointly by the UICC (Union Internationale Against Cancer) and the AJCC (American Joint Committee on Cancer) in 2018. * Statistically significant (P < 0.05).

HPAC cells were transfected with 3 siRNAs against PVT1 or a control siRNA. qRT-PCR assay showed that si-PVT1#3 was the most effective siRNA (Fig. 2A). Therefore, it was used for subsequent experiments. MTT assay indicated that knock-down PVT1 has an inhibitory effect on the proliferation of PDAC cells (Fig. 2B). similarly, colony formation (Fig. 2C), migration (Fig. 2D) and invasion (Fig. 2E) were reduced by PVT1 knockdown.

MiR-519d-3p was discovered to be one of the predicted downstream targets of PVT1 by bioinformatics screening(Fig. 4A). Recombinant pmirGLO-PVT1 and pmirGLO-PVT1-Mut were constructed. We found that the decrease of luciferase activity was due to the interaction between miR-519d-3p and PVT1. Meanwhile, the pmirGLO-PVT1-Mut was obviously refractory to miR-519d-3p-mediated luciferase activity repression (Fig. 4B). RNA immunoprecipitation (RIP) experiment was conducted using an Ago2 antibody. It has showed preferential enrichment of PVT1 and miR-519d-3p in the Ago2-containing miRNPs vs. the IgG control (Fig. 4C). The results showed that PVT1 could be pulled down by miR-519d-3p (Fig. 4D).

Knockdown of lncRNA PVT1 minimized glycolysis of PDAC cells. PDAC cells were cultured for 24 h after 48 h of transfection with either control or si-PVT1#3. Glucose uptake (A), lactate secretion (B) and intracellular ATP levels (C) of these cells were quantified and normalized for cell numbers. Shown data are mean ± SD (n = 3). Cell lysates were then analyzed by western blotting by anti-HIF-1A, anti-LDHA, anti-GULT1, anti-HK2 or anti-β-actin antibodies (D). (**P < 0.01, ***P < 0.001) 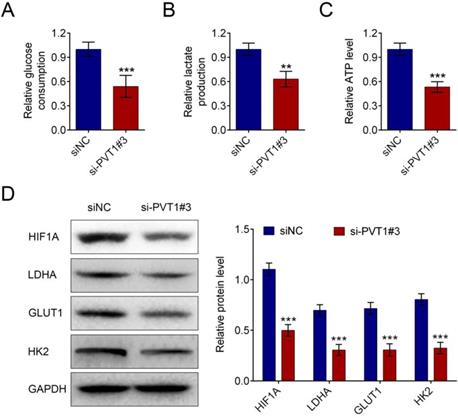 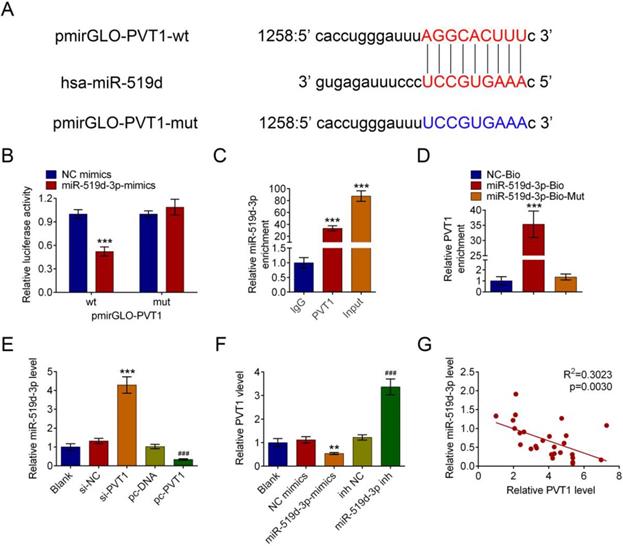 Bioinformatics analysis suggested that HIF-1A is a target gene of miR-519d-3p. The predicted binding region between 3'UTR of HIF-1A mRNA and miR-519d-3p was detected by bioinformatics analysis (Fig. 5A). MiR-519d-3p down regulated luciferase expression in the wild-type, but not the mutant control (Fig. 5B). Amplification of PVT1 in HPAC cells increased the HIF-1A mRNA and protein expression; such an effect was reversed by the miR-519d-3p-mimic (Fig. 5C and 5D). A correlation analysis showed that HIF-1A mRNA was negatively related with the miR-519d-3p levels in human PDAC tissue samples(Fig. 5E).

lncRNAs play important roles in gene expression, chromosome remodeling, and metabolism [16]. PVT1 expression is upregulated in most human cancers, with an exception of decreased expression in thyroid carcinoma [8]. LncRNA PVT1 is abnormally upregulated in most cancers, including gastric cancer, non-small cell lung cancer (NSCLC) and hepatocellular carcinoma, and has been found to be an oncogenic lncRNA [6], [7], [17]. Recurrent translocations of PVT1 that arise through chromothripsis, such as PVT1-MYC and PVT1-NDRG1, often occur in malignant tumor [18]. Correlation analysis further revealed that the majority of lncRNA and mRNAs were negatively correlated, suggesting that lncRNAs were likely to serve as negative regulators of their targeting coding genes in PDAC tissues[19]. In addition, recent reports showed that PVT1 can be as a competing endogenous RNA to sponge miRNAs to governs cancer characters [6], [9], [20],[23].

Previous reports have reported that PVT1 promotes proliferation, cyto-protective autophagy, chemosensitivity, and migration of PDAC cells and reprogrames glucose metabolism in osteosarcoma [9], [20],[21],[22], [23]. Consistent with these reports, our results showed high expression of PVT1 in the PDAC cancer and PVT1 could facilitate glycolysis and tumor progression. Part of miRNAs has been regarded as a key regulator of glycolysis inhibition and tumor progression. Several previous reports demonstrated that miR-519d-3p is downregulated in many cancers and could inhibit cell proliferation and migration [13], [14].

The effect of PVT1 on progression and glycolysis is miR-159-3p dependent. Repression of miR-159-3p overcame the inhibitory effects of decreasing PVT1 on cell proliferation by the MTT assay and the colony formation assay and on cell migration by transwell assays and wound healing assay (A, B, C and D). (E) PDAC cells were cultured for 24 h after 48 h of transfection with si-NC, si-PVT1, inh NC or miR-159-3p-inh. Glucose uptake, lactate secretion and intracellular ATP levels were quantified and normalized for cell numbers. (F) Cell lysates were then analyzed by western blotting by anti-HIF-1A, anti-LDHA, anti-GULT1, anti-HK2 or anti-β-actin antibodies. (G, H, I, J and K) A total of 2*106 cells after 48 h of transfection with shRNA or PVT1 shRNA for 48h, were then injected subcutaneously into nude mice. Tumor growth curves were measured after injection (n = 6 for each group). Tumor weights were measured after the tumors were removed. The PVT1 and miR-159-3p were detected by RT-PCR. Immunohistochemistry detection indicated HIF-1A. All values are presented as mean ± SD. (** and ## P < 0.01, ***and ### P < 0.001) 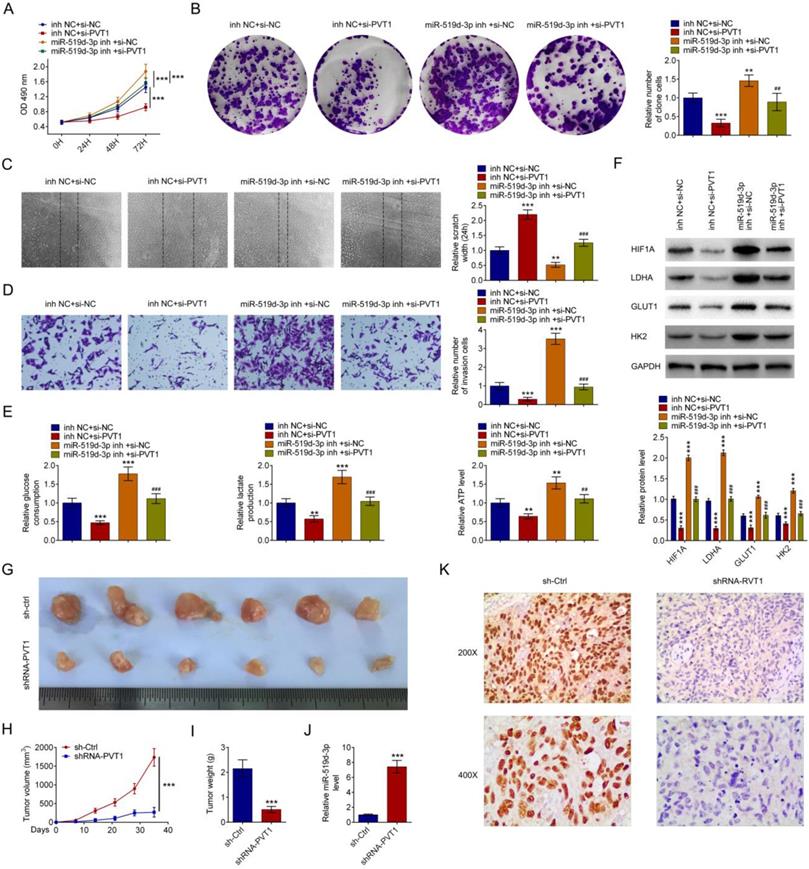 HIF-1 play a role in in angiogenesis, glucose metabolism, cell proliferation/survival and invasion/ metastasis by activating the transcription of many genes. [24]. Previous research revealed that HIF-1 is invariably upregulated in PDAC [25]. Since PVT1/ miR-519d-3p and HIF-1A participate in regulating PDAC cancer progression and glycolysis, we researched whether PVT1/ miR-519d-3p functions through regulating HIF-1A. The luciferase assay revealed that miR-519d-3p could be in direct interaction with the 3'UTR mRNA of HIF-1A and negatively regulate its expression. Tumor xenografts experiments revealed that PVT1 level correlated with miR-519d-3p and HIF-1A level. In summary, these showed that PVT1 produced an oncogenic role in PDAC partly by miR-519d-3p/HIF-1A.