Pancreatic cancer (PC) is a highly aggressive malignant tumor which is the fourth most common cause of cancer related death in Western countries[1]. The five-year survival rate of PC is less than 5%[2]. PC is difficult to be diagnosed at early stages, because the early clinical symptoms of PC are not typical. Currently, there was no effective drug and other treatment for PC. Thus, exploring molecular mechanisms of PC tumorigenesis would provide valuable insights to improve its prognosis.

MicroRNAs (miRNAs) are a class of highly conserved, endogenous non-coding small RNAs containing approximately 21 to 23 nucleotides[3, 4]. By complementary binding to the 3'-untranlated region (3' UTR) of target mRNA, miRNAs could degrade the target mRNAs or inhibit the translation of the target mRNAs, leading to regulate cell proliferation, differentiation, invasion, migration and cell death[5, 6]. miRNA-145 was reported as a tumor suppressor, because it showed low expression in different types of tumors and its expression was correlated with the progression of tumors, including breast cancer, lung cancer and colorectal cancer[7-9]. Studies showed that miR-145 was capable of binding to the 3'-UTR of SMAD3, thereby inhibiting its protein expression and subsequent inhibiting the transforming growth factor beta (TGF-β)-induced epithelial to mesenchymal transition (EMT) [10, 11]. However, miR-145 could promote the EMT in human peritoneal mesothelial cells by restraining the fibroblast growth factor 10 [12]. The mechanism of miR-145 needs to be elucidated in the EMT process.

TGF-β is a member of the transforming growth factor beta superfamily of cytokines. Many studies have established that TGF-β induces EMT in cancer cells[10]. When binding to its membrane receptor, TGF-β activated its downstream factors, including Smad2, Smad3 and Smad4, leading to EMT [11]. For instance, TGF-β triggered EMT by reducing epithelial biomarkers such as E-cadherin and accumulating of mesenchymal biomarkers such as vimentin [15, 16]. Some studies had demonstrated that miR-145 can suppress TGF-β induced EMT and attenuate cell migration and invasion [12]. However, the association between miRNA-145 and TGF-β-induced EMT remains unclear in pancreatic cancer.

The human pancreatic duct epithelial cell line HPDE6c7 was purchased from Kerafast (Boston, USA) and cultured in keratinocyte serum-free medium with human recombinant epidermal growth factor (EGF1-53) and bovine pituitary extract (BPE). Three pancreatic cancer cells PANC-1, SW1990 and BxPC-3 were purchased from cell bank of the Chinese Academy of Sciences (Shanghai, China), and cultured in DMEM containing 10% FBS in a humidified atmosphere with 5% CO2. All the cells used in this study were in the exponential growth phase.

A total of 42 cases of paired primary PC tissues and their adjacent normal tissues (from the border of cancer tissue ≤3cm) were collected from PC patients who had been histopathologically and clinically diagnosed in the Forth Affiliated Hospital of Guangxi Medical University between 2014 and 2017. All the patients were not treated with any anti-cancer therapy before surgical resection. Tissue samples were quickly frozen in liquid nitrogen after surgery and stored in -80°C freezer. This study was approved by the institutional ethics committee of the Forth Affiliated Hospital of Guangxi Medical University and all patients signed written informed consents.

Total RNA was isolated from tissue samples or cell pellets using Trizol reagent (Invitrogen, Carlsbad, USA). After reverse transcription, cDNA was synthesized and used as the template for qPCR. The volume of each reaction was 10μL: SYBR green Master 5μL, 10μM forward primer 0.5μL, 10μM reverse primer 0.5μL, cDNA 1μL, nuclease-free water 3μL. The cycling mode was as follows: initial denature at 95°C for 30sec, denature at 95°C for 5s and anneal at 60°C for 30s. The PCR reaction was carried out for a total of 40 cycles.

MiRNA-145 mimics and inhibitor were purchased from Sangon Biotech (Shanghai, China). PC cells were transfected with100mM mimics, inhibitor or its corresponding scramble control miR-NC using Lipofectamine 2000 (Invitrogen, Carlsbad, California, USA) according to manufacturers' instruction. After 48h, the cells were used for experiments. Each experiment was performed in biological triplicate.

Cells were seeded into 6-well plate with the concentration of 3×105/ml. After overnight culturing, wounds were created by using a 200μL pipet tip. Then the medium was changed to remove the detached cells. After culturing for 48h, image was captured by an inverted microscopy (Nikon, Tokyo, Japan) and the wound healing ability of each cell line was analyzed.

The transwell chambers (Corning, NY, USA) with Matrigel were used to detect cell invasion and chambers without Matrigel were used to examine cell migration. 5 × 104 cells were seeded into the upper chambers of transwell in 200 µL serum-free medium. 500 µL medium containing 10% FCS was used as the chemo-attractant and added to the lower wells. After 24h, the chambers were fixed with 80% ethanol and stained with crystal violet (20mg/ml). Then the cell numbers were counted in five individual random fields (200×) under a light microscope (Olympus, Tokyo, Japan), and the average cell density per field was calculated.

All the procedures of animal experiments were approved by the Animal Care and Use Committee of the Forth Affiliated Hospital of Guangxi Medical University. 20 immunodeficient mice (BALB/c) were randomly separated into four groups: control group, miR-145 inhibitor group, miR-145 mimic group and SMAD7 group. After anesthesia, 5×106 cells were subcutaneously implanted into each immunodeficient mouse. Tumor samples were collected at 21d after implantation.

Low expression of miRNA-145 in pancreatic cancer tissues and cells 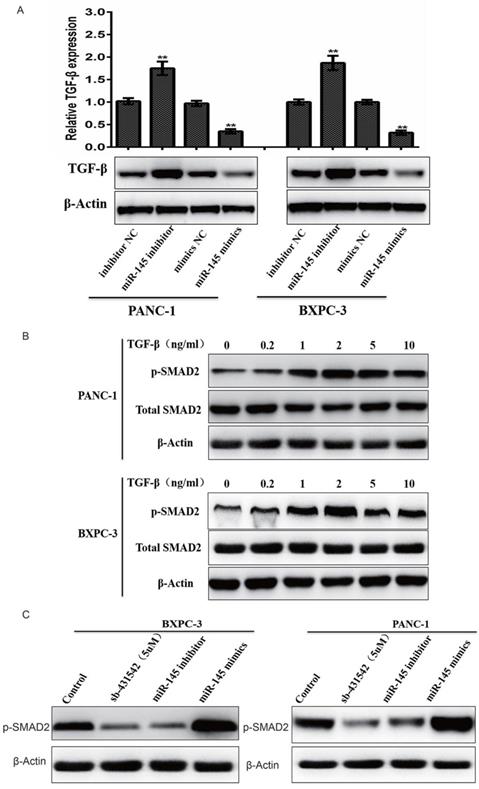 MicroRNA-145 inhibits EMT in PC cells. A: Western blotting and B: qRT-PCR on the expression of epithelial and mesenchymal biomarkers in PC cells transfected with miRNA-145 mimic and inhibitor. 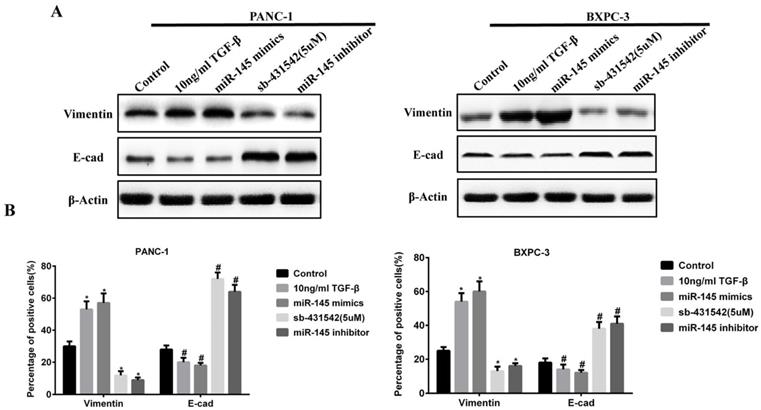 PANC-1 cells were transfected with miRNA-145 mimics, inhibitor, scramble controls or SMAD7 (a negative regulator of TGF- β signaling) expression plasmid in order to obtain the cells with different proliferation potentials. Then the cells were subcutaneously injected into immunodeficient mice to establish xenografts of prancreatic cancer. The tumor size was measured at 21d after cell inoculation. The results showed that PC cells transfected with miRNA-145 inhibitor leading to significant increases in tumor volume and weight (P<0.05), while cells with miRNA-145 mimics significantly inhibited the tumor growth (Fig 5A).

TGF-β is a multifunctional cytokine belonging to the transforming growth factor superfamily. When binding to its receptor, TGF-β activates a signaling cascade and leads to multiple outcomes, including cell differentiation, cell proliferation and chemotaxis[14, 15]. TGF-β has different effects in cancers, it acts as a tumor suppressor in premalignant cancers and a tumor promoter in advanced cancers, especially in the invasion and metastasis [16, 17]. TGF- β signaling has been confirmed to accelerate PC progression[18] and the relationship between microRNA and TGF- β signaling has been extensively studied[19, 20]. In this study, we up-regulated miRNA-145 expression in PANC-1 and BxPC-3 cells, that resulted in the down regulation of TGF-β signaling. According to the TargetScan (http://www.targetscan.org/), TGF-β receptors and smad2 were the direct targets of miRNA-145. Thus, the high expression of miRNA-145 led to the degradation of TGF-β receptors and SMAD2, following by the deactivation of TGF-β signaling.

Previous studies confirmed the relationship between TGF-β signaling and EMT. TGF-β induced EMT in different epithelial cells in vitro [21] by activating Snail, ZEB and bHLH families, that playing critical roles in the EMT process[22]. This phenomenon also existed in PC cells[23]. It was shown that miR-145 could bind to the 3'-UTR of SMAD3 and metadherin mRNA to inhibit protein expression, thereby repressing the TGF-β-mediated EMT process including cancer cell metastasis and invasion [10, 11]. In our study, TGF-β stimulated EMT in two PC cell lines. When the expression of miRNA-145 in PC cells was down-regulated, it led to the up-regulation of TGF-β signaling and promoted the EMT process. In addition, increased abilities of cell migration and invasion were observed when the expression of miRNA-145 in PC cells was down regulated. The opposite effects were found in PC cells transfected with miRNA-145 mimics since TGF-β signaling was inhibited. These results indicated that miRNA-145 inhibits EMT in PC cells through TGF-β signaling. In vivo experiments also supported that miRNA-145 could suppress the tumor growth of PC cells. 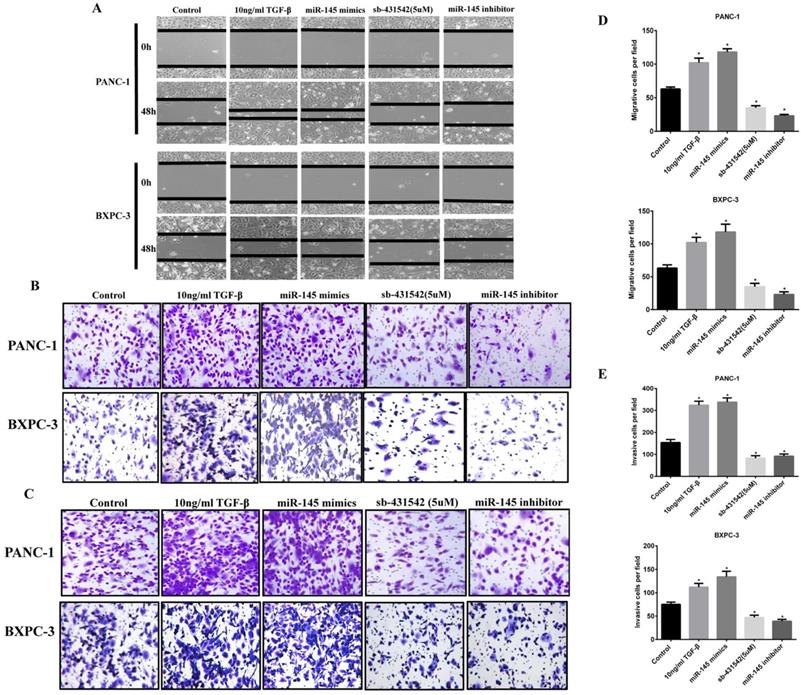 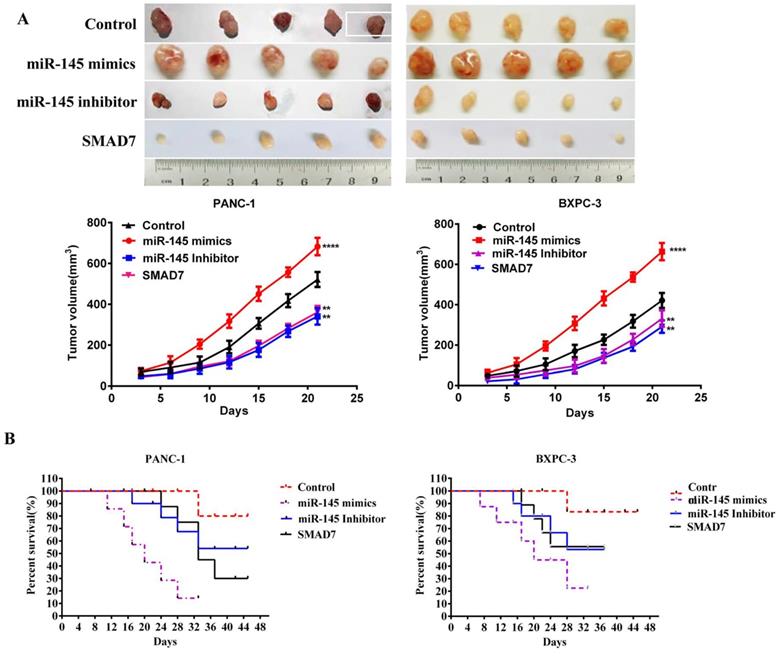 In summary, our results suggested that the expression of miRNA-145 was down-regulated in PC tissues comparing to paired adjacent normal tissues. Down-regulation of miRNA-145 activated TGF-β signaling, followed by enhanced abilities of cell migration and invasion both in vivo and in vitro. The role of miRNA-145 in inhibiting EMT through TGF-β signaling pathway indicated that miRNA-145 could be a potential candidate in anti-cancer drug development.