Despite recent improvements in diagnosis and therapy, lung cancer remains the most common malignant tumor in males, with high morbidity and mortality. As the annual incidence continues to increase worldwide, the prognosis for male patients with lung cancer remains unsatisfactory. Interestingly, smoking is associated with lung cancer and ocular lesions by altering risk factors such as carbohydrate antigen (CA)-125, CA-153 and cytokeratin-19 fragment (CYFRA21-1). A diagnostic standard for serum biomarker levels of ocular metastasis (OM) in males with lung cancer is therefore urgently needed. In this retrospective analysis, we examined the relationship between smoking preference and OM in male patients with lung cancer to identify an independent prognostic factor or establish a quantitative indicated standard for OM using the clinical indexes from 2238 cases of male lung cancer. The combination of CA-125, CA-153 and CYFRA21-1 could help diagnose OM in male lung cancer patients. This finding might lead to more timely diagnosis and effective therapies.

Lung cancer is one of the most malignant tumors in the world, leading to the highest morbidity and mortality among male cancer patients [1]. Patients in low- and middle-income countries now account for more than 50% of lung cancer deaths annually [1] since they have high smoking rates. Lemjabbar-Alaoui and colleagues reported that about ~90% of lung cancer is caused by smoking and tobacco product use [2]. Multiple inherited [3] and acquired mechanisms of susceptibility to lung cancer have also been proposed [2].

Smoking is one of the most significant pathogenic factors of male lung cancer[4, 5]. This habit is also associated with eye diseases like hyperopia, delayed corneal epithelial healing, progression of Fuchs' endothelial corneal dystrophy, age-related nuclear cataract, retinal diseases, uveitis, optic neuropathies, and thyroid-associated orbitopathy [6]. We therefore suspected that smoking might be associated with the occurrence of ocular metastasis (OM) from lung cancer.

Namad and colleagues reported a case of bilateral choroidal metastasis from non-small cell lung cancer. A 59-year-old Caucasian female patient was diagnosed with malignant lung cancer, and during follow-up, she presented with bulge on her left eye. Her follow-up chest scan simultaneously showed increases in the size of lung nodules. Her performance status remained stable at that time, except for a mild increase in dyspnea [12]. This case reflects the importance of early diagnosis of metastasis from lung cancer.

In our retrospective analysis, we examined individual and composite serum indicators associated with OM in male lung cancer, and a diagnosis standard was developed.

This study was conducted in accordance with the Declaration of Helsinki and approved by the medical research ethics committee of the First Affiliated Hospital of Nanchang University. The methods implemented in this study were conducted under relevant regulations. Therefore, the study results are uncontested by all authors. Serum samples of male patients with lung cancer were preoperatively collected from July 5, 2005 to July 25, 2016. We looked at records from 2238 male lung cancer patients admitted to our hospital. Based on the histopathological examination of samples collected by surgical resection or needle biopsy techniques, patients were categorized into two groups: OM and non-OM (NOM). The inclusion criteria for the OM group were non-primary ocular malignant tumor, non-ocular benign tumor, non-hereditary disease, non-distant metastases (apart from the eyes), and non-cardiovascular or non-cerebrovascular disease. OM diagnoses were made using CT or MRI and proved histologically or cytologically. The inclusion criteria for the NOM group were no secondary lung cancers, no organ metastases, and no lymph node metastases. All subjects of the study were fully informed of the purpose of the clinical study, agreed to participate, and signed informed consent forms.

All male patients who had pulmonary carcinoma proved by imaging examination such as CT and MRI were recruited for this study. Diagnoses were confirmed by pulmonary tissue biopsy. The clinical data of this retrospective study including age, histopathology types, and treatments were collected from the records in the medical system. Serum levels of metastatic general serum biomarkers, such as alpha-fetoprotein (AFP), carcinoembryonic antigen (CEA), carbohydrate antigen (CA)-125, CA-199, CA-153, CA-724, cytokeratin-19 fragment (CYFRA21-1), total prostate-specific antigen (TPSA), free prostate-specific antigen (FPSA), and neuron-specific enolase (NSE) as well as alkaline phosphatase (ALP), calcium, and hemoglobin (HB) were all recorded at the time of initial diagnosis of lung cancer.

A total of 2238 male patients including 50 OM cases (16 orbital metastasis and 34 intraocular metastasis cases) and 2188 NOM cases were recruited for this study. The average ages of the OM and NOM subjects were 58.82 ± 10.32 and 61.23 ± 10.32 years, respectively (P > 0.05). Smoking preference was significantly different between groups (P < 0.05) which confirmed that smoking is associated with OM in male lung cancer patients and is related to the occurrence of lung adenocarcinoma. We also observed differences histopathology types between the two groups (P < 0.05). Squamous cell carcinoma and adenocarcinoma were the most common types in the NOM and OM groups, respectively. From 2005 to 2016, the majority of patients underwent chemotherapy and surgery. Patients' detailed clinical features are listed in Table 1. Table 2 shows the relationship between smoking and histopathology types.

Differences in the clinical features and risk factors for OM

Compared with the NOM group, significantly higher concentrations of AFP, CEA, CA-125, CA-199, CA-153, CYFRA21-1, ALP, and TPSA were measured in the OM group (P < 0.05). The serum levels of CA-724, FPSA, NSE, calcium, and HB were not significantly different between the two groups (P > 0.05). The results are shown in Table 3. The binary logistic regression results showed that CA-125, CA-153, and CYFRA21-1 were independent risk factors for OM. The detailed results are listed in Table 4.

The clinical characteristics of male patients with lung cancer

The cut-off values, AUCs, sensitivities, and specificities of CA-125, CA-153, and CYFRA21-1 for diagnosing OM

The incidence of lung cancer in males continually increased through the late 90s, although it has slightly declined [15]. Lung cancer is still a serious malignant tumor. The incidence and mortality both seem to increase with age [16], and for people ≥65 it accounts for approximately 50% of all cancer cases and cancer-caused deaths [15]. Despite extensive research and considerable medical progress, a cure for lung cancer remains elusive. 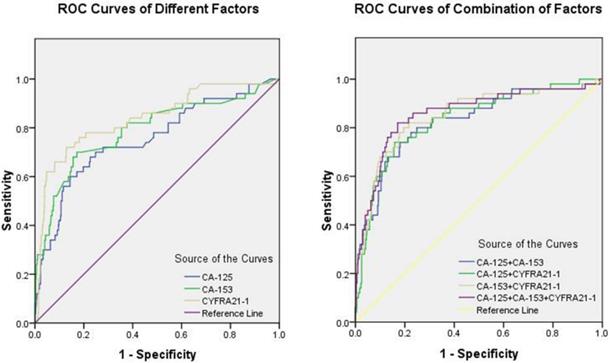 The main cause of lung cancer is certainly smoking [17], and it is highly possible that individual lifestyle and nutrition; genetic predisposition; and exposure to asbestos, arsenic, aromatic hydrocarbons, and pollution are also responsible for lung cancer cases [15].

At present, there is no worldwide unified diagnostic standard for tobacco dependence [25, 26]. Generally, drug-dependent diagnostic standards including nicotine in the International Classification of Diseases (ICD-10) are used. A person can be considered to have a smoking preference if he has experienced or demonstrated at least 3 of the following 6 items in the past year: 1) strong craving to smoke; 2) difficulty controlling smoking behavior; 3) withdrawal symptoms sometimes occur when stopping or reducing the amount of smoking; 4) tobacco tolerance performance, that is, the need to increase the amount of smoking to obtain the experience that could be obtained by smoking less in the past; 5) gave up or reduced other activities and preferences in order to smoke; 6) and continued to smoke regardless of the dangers. According to the quantitative criteria of male smoking preference [Table 6], we classified moderate tobacco dependence and severe tobacco dependence into “Ever/Current” smoking statue, then classified mild tobacco dependence into “Never” smoking statue, finally divided all samples regardless of the presence of OM into two groups to observe their histopathological type. The smoking group has a higher probability of adenocarcinoma (56.3%), while the non-smoking group has a high incidence rate of squamous cell carcinoma (49.1%). Table 2 shows that smoking is more likely to cause lung adenocarcinoma. Yao et al. reported that smoking led to downregulation of histone deacetylase-2 and interleukin-8 and upregulation of tumor necrosis factor-α in lung adenocarcinoma tissues, and these changes were especially pronounced in smoking combined with chronic obstructive pulmonary disease [17].

Among malignant diseases, lung cancer is the leading cause of morbidity and mortality in China [27]. Approximately 57% of lung cancer patients have distant metastases at the initial diagnosis, which is associated with poor outcomes [27]. The incidence of OM from lung cancer is reported to be 0.1-7%, with adenocarcinoma and small cell lung cancer accounting for the highest proportions of these cases [28]. Guo et al. reported an interesting case in which a woman presented with a 1-week history of left eye pain and blurred vision. Examination revealed central lung cancer in the right lower lobe with OM. After surgery and chemotherapy, her eye symptoms disappeared, the ocular lesion was well controlled without any specific ocular treatment, and she achieved prolonged progression-free survival (PFS) [28]. If a quantitative indicator standard of serum risk factors for early diagnosis is established, it can effectively prolong PFS, which is one of the most significant goals of our study. Nanoparticle-based therapeutics are currently paving a new way for the diagnosis, imaging, screening, and treatment of primary and metastatic tumors [29]. Eventually, treatment will be much easier, and the mortality rate will be greatly reduced.

Our results also identified AFP, CEA, CA-125, CA-153, CYFRA21-1, and TPSA as six clinically available biomarkers for OM in male lung cancer patients. CA-125, CA-153, and CYFRA21-1 are closely related to OM (P < 0.05). Meanwhile, AFP has been associated with liver cancer [30], and CEA is a broad-spectrum tumor marker used to assess the progression and prognosis of colorectal cancer [31], breast cancer [32], and lung cancer [33]. Its specificity and sensitivity are limited, and CEA only has auxiliary value in diagnosis. Other studies revealed that serum CEA levels have a clear relationship with colorectal cancer stage [34], and TPSA is closely associated with prostate cancer [35].

Finally, we performed binary logistic regression analyses to assess the utility of CA-125, CA-153, and CYFRA21-1 as serum biomarkers for OM in male lung cancer. The highest sensitivity and specificity for a single risk factor were for CYFRA21-1, at 72.00% and 87.09%, respectively, while the values for the combination of CA-125, CA-153, and CYFRA21-1 were 82.00% and 82.92%, respectively. The combined value for the diagnostic specificity of the three risk factors was greater than any alone. The ROC curves show that the combination of CA-125 + CA-153 + CYFRA21-1 had the highest AUC value (0.859) for the diagnosis of OM in male lung cancer. Accordingly, it could be a useful combination of biomarkers for early clinical detection of male lung cancer. A reliable, sensible, and convenient clinical standard can be provided using the cut-off values of CA-125 (> 76.56 U/ml), CA-153 (> 22.33 U/ml), and CYFRA21-1 (> 10.70 ng/ml). A three-biomarker panel (CA-125, CA-153, and CYFRA21-1) could allow classification of lung cancer with or without OM, with excellent sensitivity and specificity.

There are some limitations inherent to our study. First, the sample size of this retrospective analysis is small, especially for the OM group, so it can only be determined that smoking affects these biomarker levels but is not fully identifiable as a key factor. Serum biomarkers were collected and analyzed at the time of diagnosis, not at baseline. The biomarkers developed thus far are not the most ideal due to the limited sensitivity and specificity both individually and as a panel. Finally, all male patients were diagnosed in the same hospital. Further studies are needed in large samples of patients from multiple centers.

The risk factors of metastases of male lung cancer

25. Piper ME, McCarthy DE, Baker TB. Assessing tobacco dependence: a guide to measure evaluation and selection. Nicotine & tobacco research: official journal of the Society for Research on Nicotine and Tobacco. 2006;8:339-51