Objectives: Small-size lung lesions suspected of being cancer are now often being identified on computed tomography. Correspondingly, a new lung cancer staging system has been proposed by the International Association for the Study of Lung Cancer (IASLC), in which the T1 factor and adenocarcinoma are re-subclassified. Previously, we proposed an intraoperative cytological diagnosis and its classification of small-size lung adenocarcinoma, which correlated significantly with clinical malignancy, to be used for selecting the surgical strategy. In the current study, the correlation of our intraoperative cytological classification with the new 8th IASLC classification was investigated.

Materials and Methods: A total of 139 consecutive small-size lung adenocarcinoma cases were surgically resected from 2000 to 2006 and included in this study. Intraoperative stump imprint cytology using these specimens was performed, and the cases were classified into 5 groups based on our classification. The cytological classification was compared with the IASLC classification and the WHO histopathological grading.

Small size lesions in lungs with suspected lung cancer were resected by wedge resection. The tumor specimen was then cut at the center, and the stump was smeared onto a microscope slide and immediately fixed with ethanol in the operating room. Cytology specimens were examined following Papanicolaou staining (Figure 1).

Adenocarcinomas smaller than 2 cm, which corresponded with T1A of the 7th UICC classification, were investigated because the investigation began from 2000, excluding macroscopic mucinous adenocarcinoma cases. Cytology examiners diagnosed and classified the samples according to the N-H classification, based on cell cluster shape, cell and nucleus size, and the existence of necrosis, in a blinded manner.2 In the criteria, the shape of the cluster is regarded as the most important item, based on the idea of the Noguchi classification, which was classified according to the structure of the tumor. The classification criteria are shown in Table 1 and Figure 2.

Since 1993, we have been performing intraoperative imprint cytology based on the N-H classification. In the present study, consecutive patients with small lung adenocarcinoma tumors were included. The clinical T1a and T1b N0 lung adenocarcinomas, which correspond with T1A of the 7th UICC classification, according to the IASLC 8th edition and that were sampled during the operations from 2000 to February 2006 were analyzed. Written, informed consent was obtained from all patients, and the study protocol was approved by the ethical review board of our institution (Approval No. 18055).

Relationships of incidence between 2 or more groups were compared using χ2 contingency table analysis. Values of p≤0.05 were considered significant.

(A) The tumor was resected with a wedge or segment resection approach, then cut at the center. (B) The surface of the cut section is imprinted or smeared onto a microscope slide, and (C) then the sample is immediately fixed and observed following Papanicolaou staining. 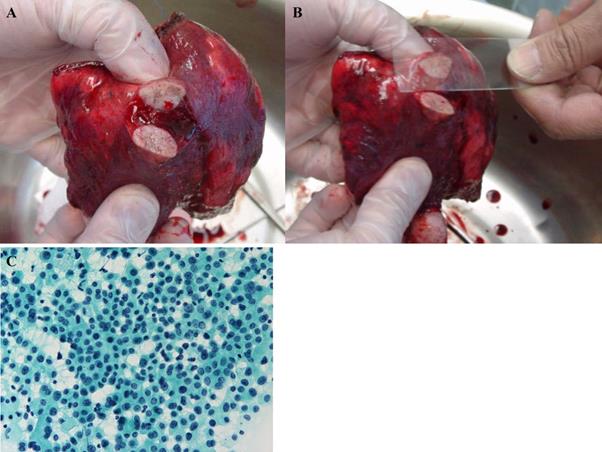 Comparing the WHO histological grade and our cytological classification, there was a significant relationship (p<0.0001, Table 3).

Previously, some researchers reported postoperative imprinting cytology using resected lungs for small-size adenocarcinomas.5-7 Hoshi et al. reported that lung adenocarcinoma patients with micropapillary pattern diagnosed with intraoperative cytology had worse outcomes than the others in Stage I.5 Other studies reported that, diagnosed with intraoperative cytology, large cluster size, moderate or severe nuclear irregularity, many multinucleated cells, and large nuclear size were significantly associated with a poor outcome.6,7 All of these studies concluded that the cytological factors were associated with postoperative prognosis in patients with small adenocarcinoma.

*: Because of pleural invasions, the T stage was raised.

We often see small lesions in lungs with suspected cancer on computed tomography screening because of the development of diagnostic imaging technology and the distribution of preventive screening. There are some preoperative diagnostic methods, e.g. ground-glass opacity on CT and maximum standardized uptake values of positron emission tomography.11 However, these lesions often need to be diagnosed intraoperatively for more accurate diagnosis, with a partial lung resection including excisional biopsy for a frozen section. After the conventional intraoperative frozen diagnosis, a part of the tumor, often the center of the tumor, is lacking for the final diagnosis, although we have to describe the tumor in size, and as adenocarcinoma, the predominant type of the adenocarcinoma pattern subclassifications and so on in detail as the postoperative diagnosis according to the classification of the IASLC 8th TNM system. To provide an accurate description, we must theoretically preserve the whole tumor. In this respect, our cytological method has an advantage, because the diagnosis does not need the tumor section itself, but only the surface of the section.

This study was conducted at a single institute and had a limited number of subjects, who had all been operated on more than 10 years ago, because we have selected the surgical mode according to the result of the cytological classification since 2006. In addition, the Nakayama-Higashiyama classification is a qualitative system. To improve the classification system, a quantitative method and review of more cases are needed.